Technical things always seem to go wrong when you need them most. I don't know if that statement is generally true but it seems so to me.

My etching press, as often mentioned before, is an essential tool and I've currently been using it for printing relief blocks (for the 'Trans-Siberian' book) rather than etchings. The difference is basically in the thickness of inked blocks or plates which must pass under the roller in order for ink to transfer to the printing paper. Etchings are generally on thin metal plates and require heavy pressure - adjusted by tightening the top screws - whereas relief blocks can be any thickness and only need fairly light pressure since the ink lies on the surface of the block rather than in grooves below the surface (intaglio) as in etchings.

Unlike some of the more modern machines, it's not possible on my press to raise or lower the heavy steel top roller to allow any thickness of block to pass through. The DIY way of solving this problem is to loosen pressure completely, push through on either side of the roller a couple of flat wooden runners same height as the intended blocks, then tighten the screws again as needed. This I did and it worked fine for about a hundred proofs from relief blocks. 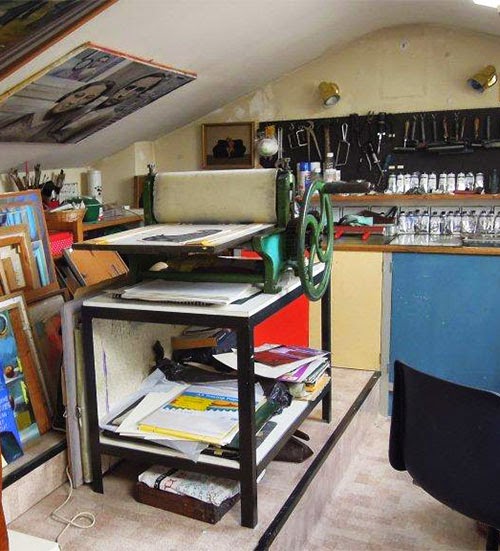 But recently an ominous bump developed in the middle of the press bed and though I tried to ignore it, when a vinyl block I was printing was bent beyond recognition and a cracking sound came from the press, drastic action had to be contemplated. Examination revealed that a sheet of formica, glued to the steel bed over thirty years ago and firmly in place all this time, had suddenly come unstuck in the centre, though not at the top and bottom edges. Result: solid bump in the middle. Reluctant remedy: get rid of offending formica. Easier said than done. This was all taking place around 2 am, by the way.

Struggling to lift the formica stuck to the edges of the base I succeeded in breaking off pieces while rough bits of the backing remained glued to the metal - that's the reddish-brown mess showing in the photo below - it looks like rust but isn't. Note the strip of wood keeping the roller off the base, but not enough to let the steel bed run right off the press which, in the worst scenario, would chop my feet off, or would fall to the floor and stay there because I wouldn't be able to lift it back up. Minutely accurate, heart-stopping attention to the top screws was needed to prevent such a disaster from happening. 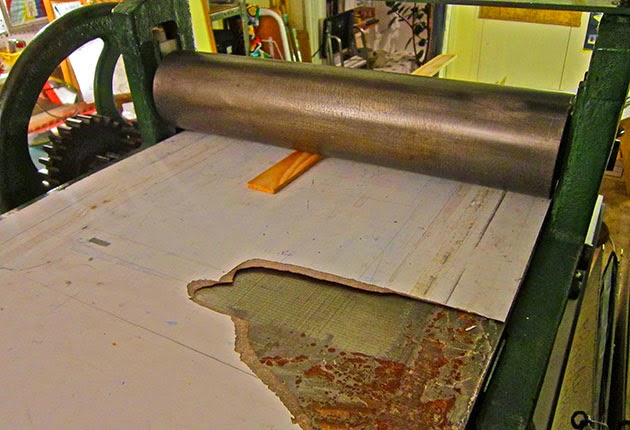 Below I'm pushing a knife under the formica with one hand while the other hand (invisible) attempts to hold the camera and the roller screw simultaneously. 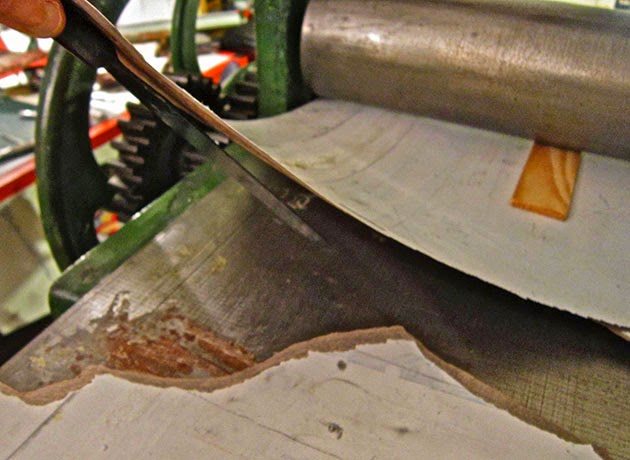 To make a long story a bit shorter, I did manage to escape injury and to remove all the formica, but not the residue from its backing which resisted all scrubbing with steel wool etc. So I decided to let it be but to stick a length of Fablon over it and the whole of the metal bed - another hair-tearing, tooth-grinding task that could only be undertaken in the crazy hours of the night by a stubborn fool.

There is a happy ending: my beloved machine is now restored to peaceful, purring operation and I can get on with printing new blocks for the special prints to be included with the special extra copies of Trans-Siberian Prosody and Little Jeanne from France currently in production at The Old Stile Press.

And here is something beautiful to conclude and to celebrate the marvellous Indian summer weather we've been enjoying in London.

Consider the lilies of the field.... 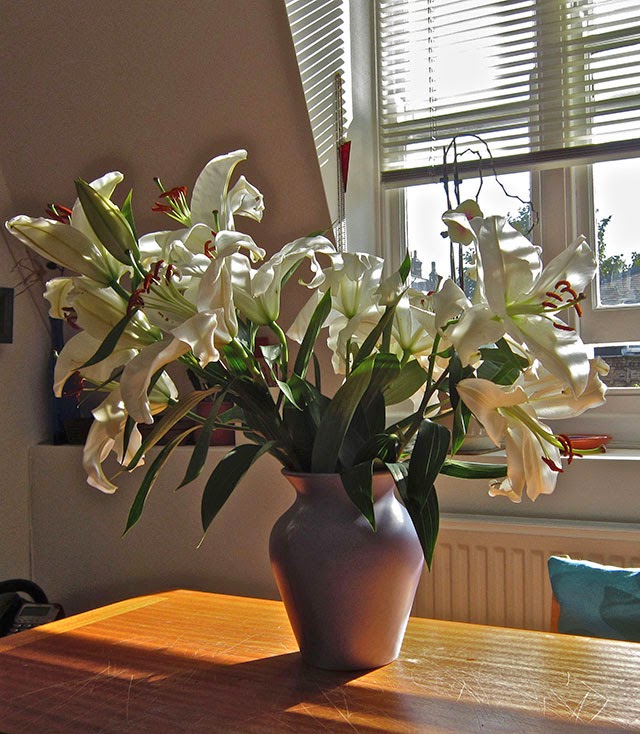 Posted by Natalie d'Arbeloff at 12:26 am

I became so caught up in the unfolding tragedy of the press that I forgot to read the happy ending until about the third re-read. Having read most carefully to the very end, Ifind myself in admiration of your diy skills and stickability to the task in hand, even if it is at ungodly hours of the night. Take care Natalie!

Tom,I'm proud of my stubborn, if unreasonable efforts to avert the tragedy. Sometimes the middle of the night...or rather the small hours of the morning...is the right time to undertake tasks that daylight would deem impossible.

Sounds like a case of misplaced sentimentality. Have you hung on to this device too long? Probably not, because a quick glance at so-called modern etching presses reveals that this is an area of technology where nothing much changes.

Dave Gunning, Ironbridge:
Little Thumper, bed size 12 x 30 in.
"Chunky, fun to use. Easily goes from intaglio to reliefs. A good looker for any workshop/studio."
£850.

In any case it isn't the ironwork that's failed, but the Formica. I'm surprised you opted for this product since its main application is for hard-working decorative surfaces with comparatively light point pressures (eg. from a kitchen knife).

But Formica has another failing. At some point in its development the sheets were found to be "more brittle than potato chips, hence easily damaged. Breaking off even a small corner rendered the sheet unusable (and not repairable or recyclable)". Subsequently the product chemistry was changed for greater durability. I have no idea whether the sheet you used came before or after this.

Fablon seems like a very temporary solution since, if I've read you correctly, it has been laid over an uneven surface. Mind you I can understand why you found it hard to remove the backing residue. The treatment you have meted out to the Formica over thirty years could be regarded as an extension of the manufacturing process which involves enormous pressures.

I also cannot understand how you have compensated (permanently) for the reduction in height between the roller and the new bed level.

I would have thought a much more suitable bed cover would be one of the composite wood substitutes because of their consistency and dimensional accuracy. Most of them are identified by acronyms and the most popular is readily available in DIY stores. The initials escape me for the moment.

Perhaps you could assess this comment in terms of my word credit balance. It is, as I promised, concise but that is not the same as being short.

Is it a breakfast of oats that feeds your energy and determination? Bravo on you.

Funny how the wee hours of the morning can be so productive. But I like the beautiful lillies too. They toil not,neither do they spin.

Natalie, you are one of those women (like my SWMBO) who tackle problems that certain men (like me) would never attempt. And win! Congratulations to you and your incredible skills. And art.

Robbie, as ever generous with your commentary and my thanks for that. No sentimentality involved in keeping my old press: it's a quality machine for its purpose, made by Kimber/Hunter-Penrose, best manufacturers from way back, never bettered. As you discovered, nothing much changes in this simmple machine. I could have gears put on(but don't need them). The more recent models which allow for the roller to be raised up & down are generally lightweight and not as reliable as mine. Bref: the wood runners work perfectly for my purpose and with the formica gone, there's no risk of the solid steel bed ever bending. Only reason for the formica was to provide a surface to mark plate positions on and it served well until now. I can use paper or cardboard for the same thing and only applied Fablon to make the steel bed neater. The roughness left by the formica residue doesn't matter and won't affect the printing at all. But you're right about formica, it ain't good stuff and is unrecyclable - I don't know where to throw away the broken sheet remaining. The composite wood you mention is MDF; but it's not necessary to cover the steel bed at all.
You wrote:
".. cannot understand how you have compensated (permanently) for the reduction in height between the roller and the new bed level."
There's no reduction. The roller sits on the press bed and on whatever else one puts there; the formica didn't come with the press, it was an addition which I, and other printmakers, commonly used for convenience. The gap made by the wooden runners is exactly filled by the thickness of blocks to be printed.
Whew! Now I've overstepped my word limit.

Ellena, I eat toast and tea and fruit for breakfast - not particularly energy-giving.
Maybe my night-time bouts of activity are due to a lifetime habit of night-owlishness. I've tried to become a morning person but haven't succeeded yet.

Hattie, so you're a night person too? There's something about the quiet darkness which makes one feel cozy and free from the demands and duties of daytime...isn't there?

The lilies are majestic indeed. No artist can claim to have created anything more beautiful, in my opinion.

Bruce, bravo to SWMBO and all of us DIY women! In fact, contrary to received opinion, women who like DIY are usually better at it than most men, at least in my experience. The fragile little lady who doesn't know how to hold a hammer may be a mythical creature or, if she still exists, is a relic.

what a pickle but I admire and am happy about the way you got it fixed!

I'm sure I would have downed tools and gone off in a sulk.

Adam, unfortunately machines and other misbehaving inanimate objects don't respond to sulks. They just don't give a damn. So some of us are reluctant obliged to resort to DIY.


Hattie, siestas are good. Especially in the morning, when everyone else is up and about with the early worms.