ARE YOU BEING ZAPPED? DO YOU CARE? MICROWAVE RADIATION FROM WIRELESS DEVICES

Watch this YouTube video and think about it. The Swiss government is warning its citizens about cordless phones and other wireless devices - why isn't every government doing the same? Obvious answers:

1. Because there's really nothing to worry about, folks. This level of radiation is perfectly safe. Anyone who thinks different is either ignorant, hypochondriac, a conspiracy-theorist nutcase, or all of those.

2. Because there might be plenty to worry about but the industries producing all of this technology are far too profitable and far too advanced to stop their progress or to go back to drawing boards and re-think the whole thing. And they are certainly not keen to publicise any data which points to the dangers.

3. Because hey, life is brutish and short! So why not enjoy our dangerous and delightful gadgets while we can? And if we, or our children, or grandchildren, die from cancers caused by constant and close contact with such gadgets.....oh, too bad! That's life! Deal with it!

We've all seen young children (and of course adults too) with mobile phones pressed against their heads, having hours-long conversations. And pregnant women resting their laptops (or iPads) on conveniently swollen bellies as they surf the net. And men with laptop between their legs as they sit on a train working or playing computer games. All perfectly safe? I don't think so. And yes, I do care.

I'm getting rid of my one cordless phone. I've never liked it anyway, sometimes it sort of buzzes against my head. And I don't have an iPad or a SmartPhone. And I've never rested my laptop on my lap. Anyway I mainly use a desktop and have no WiFi devices. Whew! 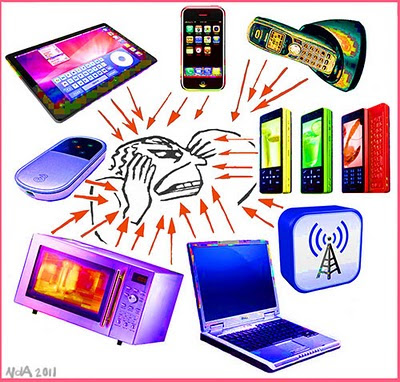 MORE
Posted by Natalie d'Arbeloff at 8:08 pm No comments:

It takes me so absurdly long to write those short episodes of La Vie en Rosé and to draw some illustrations for it, plus the normal daily routines, that I've rarely got enough energy left over for a blog post. Maybe I'm just getting less multi-faceted than I used to be. Now I desperately long for one-track mindedness. But which track? Which platform? Which train? What time does it leave and where is it going?

Next week is my last singing class of the series - can't believe it's been ten weeks already. I've learned a bit about breathing in and out at irregular intervals, such as: out for 4, in for 4, hold for 8 and so on. The out breath always comes before the in breath in these exercises - I don't know why. I've learned that my voice is a Contralto, sort of. I've learned to look at the audience while singing and not somewhere above their heads.

We've only had two solo sessions and next Friday will be the third. For my first solo I did Piaf's Je Ne Regrette Rien . My second was 99 Miles from L.A. (Albert Hammond's version) and on Friday I'll do the Bryan Ferry version of Smoke Gets in Your Eyes. I know - my choices aren't hip but I don't care - I love those songs and they're in a vocal range I can more or less manage. Everyone brings a CD or iPod to use as a backing track for their chosen number so it's not as scary as it would be without accompaniment.

If you spend most of your time at activities which make use of your eyes and hands and brain but leave the rest of your faculties idle, it's very refreshing to go out and open your mouth and throat and chest and make musical sounds, along with a group of other people doing the same and, occasionally, to sing all by yourself in front of them. So I've signed up for another series starting late next month, a Singing Improvers class. 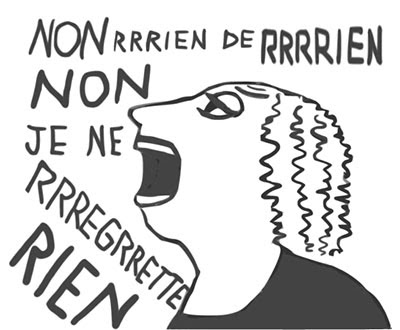 Due to popular request (well...one request ) here is a video rehearsal of my number for Friday's class. Not my fault if Bryan Ferry can't get the timing right. Embarassing, isn't it?

MORE
Posted by Natalie d'Arbeloff at 2:03 am 2 comments:

Meanwhile, back in the real world, events continue to tumble down their apocalyptic course. I even turn on the news in the daytime now, expecting further disaster.

MORE
Posted by Natalie d'Arbeloff at 4:58 am No comments:

That's the title of an article in today's Guardian, on the Comment & Debate page, by John Vidal. But I can't find a link to it on the Guardian website so, because it is of such vital relevance to the events in Japan right now and to the future of this fragile planet, I've scanned it and am posting it in its entirety below.

Please link, copy, quote and disseminate it by whatever means you use - blog, Tweet, FaceBook etc. to share the things that really matter to you. The internet is said to be the newest and most effective instrument for people power: could it generate enough people power to influence the nuclear industry, and the decision-makers who support it, to reconsider their short-term and long-range plans? 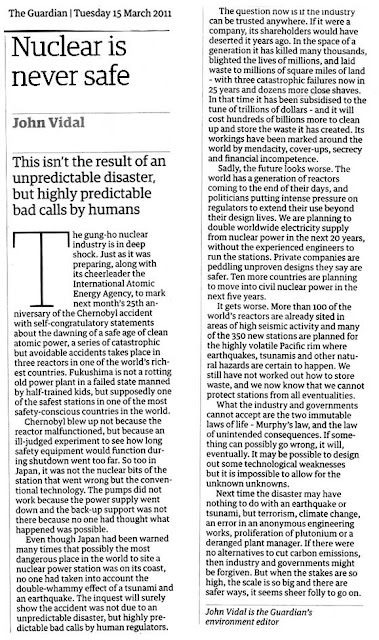 THE EARTH QUAKES, WE TREMBLE

Who has seen the videos and photos of the earthquake and tsunami in Japan, made even worse now by possible nuclear meltdown, and not thought: what does anything mean when faced with such devastation?

Even if we are presumed safe, doubts bubble up, rattling the foundations on which our daily lives rest. It's not only physical certainties which suddenly seem unreal: watching cars, trains, ships, planes, streets, buildings, towns and all sophisticated technology - not to mention people - being swallowed up, crunched and spat out in bits by the inexorable advance of a monster wave - but  also the To Do lists on my desk, the projects, the things I've done or am doing seem completely irrelevant, insubstantial, confronted by such irrefutable proof of the fragility of all human activity. You could say that simply facing one's own mortality gives rise to the same existential angst. But it's not quite the same, is it? As long as something remains after you've gone, there's continuity. But what if it all goes, on the kind of scale they're witnessing in Japan right now and perhaps, in future, even worse? Don't you wonder: what is the point?

The answer given by many creative people would be: the point is the point. You do what you do because that's who you are and you would go on doing it even if there is no point - the meaning is in the doing. 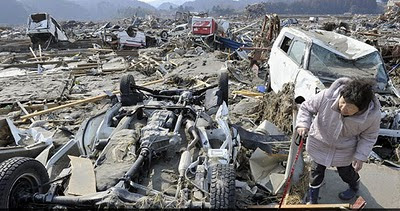 A brilliant review titled Keep the Channel Open by the poet Jared Carter of a biography of Martha Graham by Agnes de Mille is on his excellent new blog on books and literature: Rushing the Growler . His review covers so much ground, so profoundly, that it's enough for me even if I never read de Mille's book. I was never a fan of Martha Graham but the quote below (from advice Martha gave to her friend Agnes when the latter was plagued by self-doubt) is so inspirational that I'm going to put it up on the wall where I can see it daily:

There is a vitality, a life force, an energy, a quickening that is translated through you into action, and because there is only one of you in all of time, this expression is unique. And if you block it, it will never exist through any other medium and it will be lost. The world will not have it. It is not your business to determine how good it is nor how valuable nor how it compares with other expressions.  It is your business to keep it yours clearly and directly, to keep the channel open. You do not even have to believe in yourself or your work. You have to keep yourself open and aware to the urges that motivate you. Keep the channel open. As for you, Agnes, you have a peculiar and unusual gift, and you have so far used about one third of your talent.
MORE
Posted by Natalie d'Arbeloff at 3:14 am No comments: