Haven't got back into my stride yet but have to stride again as I am going away tomorrow, for a week, to Portugal, to see my brother, who recently moved to Tavira in the Algarve. Will bring back movie and photos and who knows what else. See y'all soon. La Vie en Rosé is not forgotten!

Here's another poem-like doodle thing to fill this blank space.

Posted by Natalie d'Arbeloff at 1:38 am No comments:

Am adding this to the POEMPICTURES page. Does it need explanation?

One-track-minded people are those who achieve things - sometimes great things, sometimes terrible things. They are the ones you hear about because they'll have discovered something momentous or solved a problem nobody's ever solved or gone spectacularly insane or committed some particularly atrocious crime. Their locomotive brain drives them relentlessly along that one track they've chosen and doesn't stop at all the little stations along the way to have a coffee and a look around.

I am not one-track-minded, as my record shows. But I've always thought I should/would/could be if only I...um...stuck to one track. Oh yes, for short periods of time I can enter that zone where it's always four in the morning and breakfast is at nine pm and the outside world is really really outside and the mind is totally focused on the idea, the task, the problem. It's a marvellous zone to be in, exciting, challenging, even if it's totally obsessive and egocentric, shutting out anything and anyone who is a distraction. But I can't stay there, distractions rush in like noisy children, new tracks appear out of the blue - which one to follow? It's a fairground out there, irresistible and irrelevant distractions all over the place.

Know what I mean?

Anyway, I'll get back to La Vie en Rosé very shortly as soon as the deck is cleared of other unfinished business. Meanwhile my non-winning comic strip, along with other non-winners, is at Forbidden Planet, and there's a plan afoot to collectively publish a book of the non-winning graphic entries, a kind of Salon des Refusés. You can see some of the other entries on flickr here. Any Londoners interested in comics (ie sequential art: more sophisticated title) are very welcome to attend the next forum of Laydeez Do Comics on Monday 30th November, 6:30pm, details on their website. I'll be doing a short (10 minute) visual presentation there.

I've made a new section to post my POEMPICTURES . I was inspired by this new site. 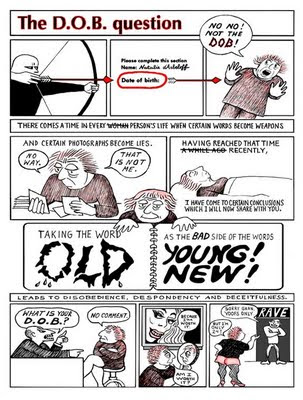 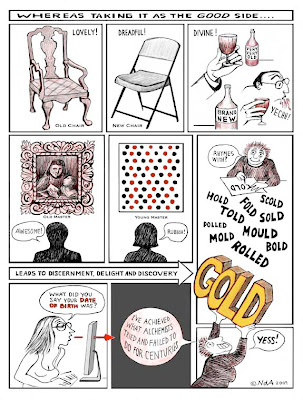 
I knew my entry had no chance but I'm glad I took up the challenge. I agree that Vivien McDermid's story Paint with her lovely illustrations (published today in the Observer magazine section) deserved the prize but I haven't seen the other submissions.
Anyway, so as not to let it go to waste, herewith for your entertainment is the full strip I submitted to this competition. (CLICK ON IMAGES FOR LARGER VERSION)
MORE
Posted by Natalie d'Arbeloff at 8:25 pm 3 comments: