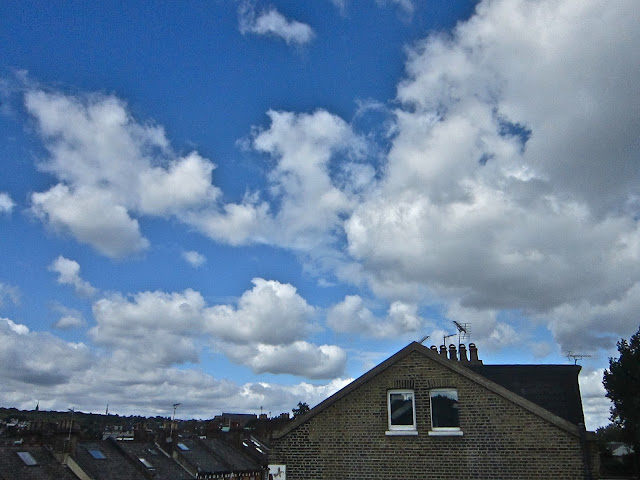 Wiped out by this heatwave, maybe also the air pollution, intensified by the heat. My upstairs studio like a Turkish steambath and creative energy down to zero. However, it gets a little bit cooler in the evening and some kind of nourishment must be taken. Soup is the answer. A bunch of fresh watercress, some broccoli, a few new potatoes, a sauteed onion, a couple of chicken stock cubes. When cooked, liquidise. Voilà! Delicious either hot or cold, with croutons. Don't need anything else these hot days. 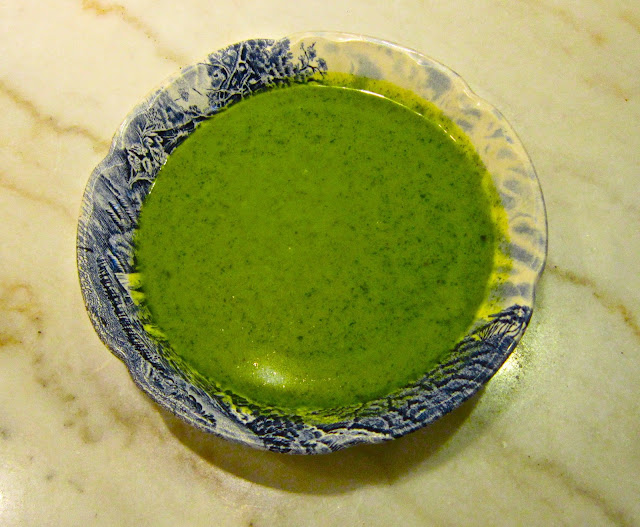 Long ago in a book (by Marguerite Duras I think) I read about clafoutis. Oddly enough I'd never eaten this cherry dish in France, never even seen it. I love the name, the je-m'en-fou implied, and kept a recipe from one of the Sunday supplements. So I thought I'd try it now and defeat the heat apathy. I have the cherries - last of the season - dark and luscious, plus eggs, flour, sugar, milk. The recipe is peculiar:

After stoning the cherries, it tells you to lay out the stones in a row on a tea towel, fold the towel over them, then smash them with a hammer. This is supposed to release the noyau, the kernel inside. Maybe I smashed too hard but there were only some miniscule whitish bits all tangled up in shell fragments. But I obeyed, gathered up the bits and sprinkled them over the stoned cherries, put the lot in a buttered dish. Then the whisking of flour, caster sugar, eggs and milk. The amounts of sugar and milk specified seemed far too much so I ignored the recipe and reduced them, poured the mix over the cherries, added some raisins (my idea) and baked the thing for about 50 minutes. Not bad, but not ecstatically good as I was led to believe. Rather bland and chewy, eggy, a sort of flan. I ate half of it with vanilla ice cream. The other half is for tomorrow. 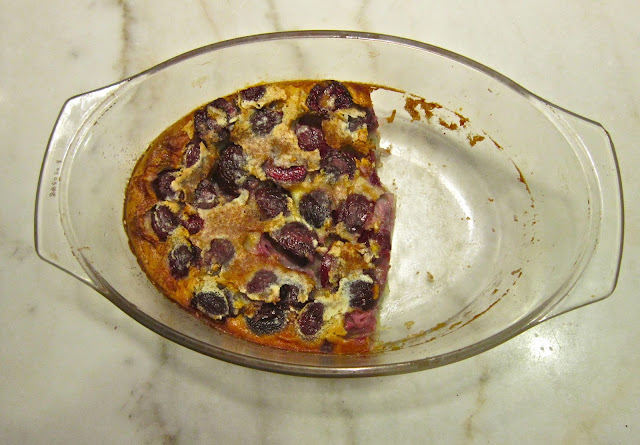 Beautiful summer day made entirely perfect by a visit to George Szirtes and Clarissa Upchurch in Wymondham (pronounced Windam) Norfolk.- I'm running out of superlatives, I can't keep saying beautiful etc. but it really was, start to finish. Here's George's Facebook post about it. 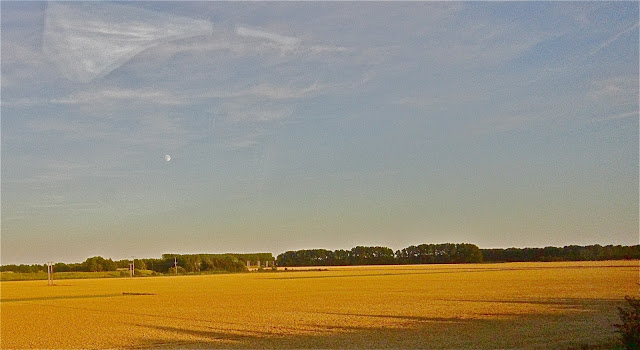 First of all the view out of the train window from Cambridge onwards - the flawless geometry of the Norfolk Fens -  endless flat horizontals broken by shorter verticals and then suddenly these absolutely outlandishly perfect circles equally spaced over the ochre flatness. Rationally I knew they were hay bales, not made by human hands, but it was all really BauHaus. I haven't been to this part of the country before and I was mesmerised, amazed that the wooded clumps of trees here and there on the flat ochre or green carpet were all exactly the same height so that they looked like hedges, carefully trimmed by a hedge-barber. (instead of a hedge-funder, heh heh). And no human beings in that perfect geometrical landscape, no figurative olde worlde peasants tilling the soil. I thought it would be an idea to insert some life-size statues of said peasants in those fields, you know, just to surprise people looking out of train windows.

But never mind all that. The real point of the day was the connection with two exceptional individuals, Clarissa and George, and the inspiring environment in which they live. Unlike George, I'm not good at describing a day's progress with its many significant details so I'm not even going to try. Both of them are multi-talented, multi-faceted, impossible to summarise such richness, visual, verbal, personal. The time flew by, lunch and conversation were delicious, stunning artwork in portfolios and on the walls (the walls too, especially that silky aquamarine one!). Here are a few images. Others remain in my mind and heart. 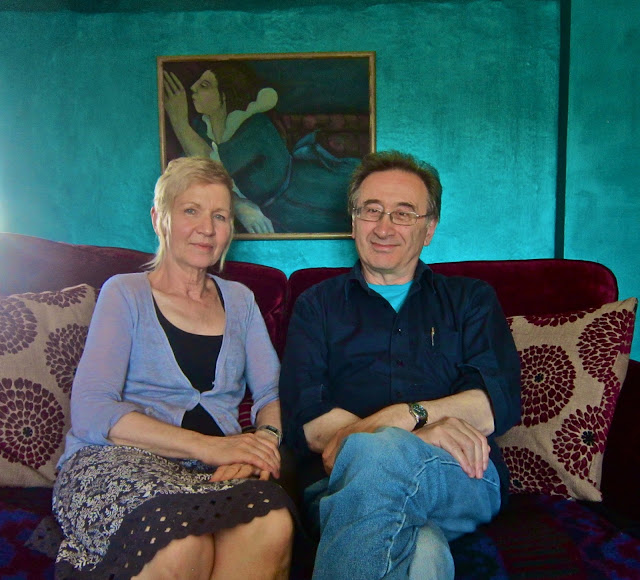 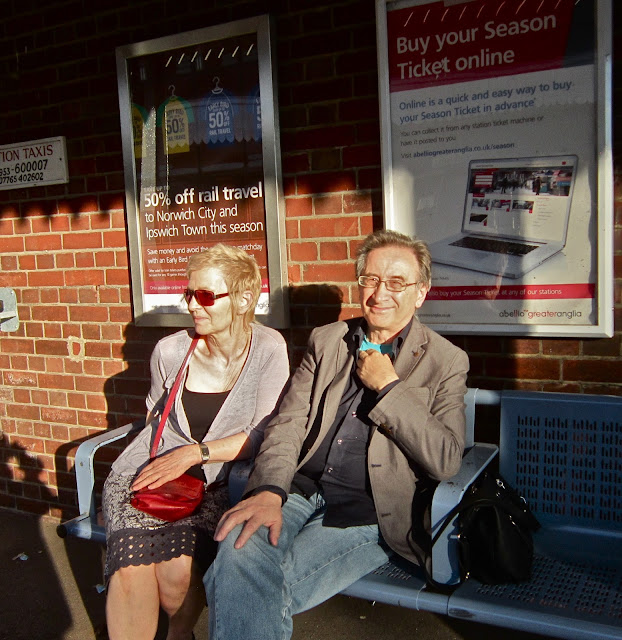 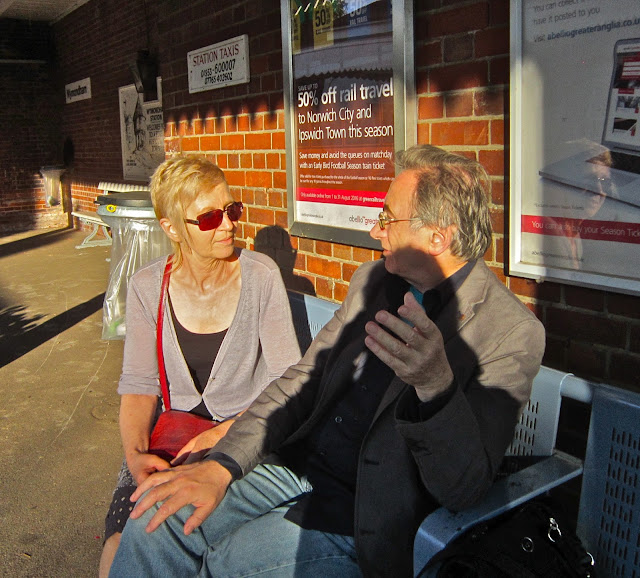 Latest Pableau nearly finished. Hard to photograph because of the reflective surfaces but here are a couple of shots. The back of each flat piece is painted somewhat differently from the front and you can see this in the mirrored background, including the text bubble (written wrong way round on the back so it reads right way round in its reflection).

"Everything puzzled me. I resolved to devise experiments to test reality." The sentence comes from my unfinished-probably-never-to-be finished graphic gnovel. Am taking bits of it to make more Pableaux. 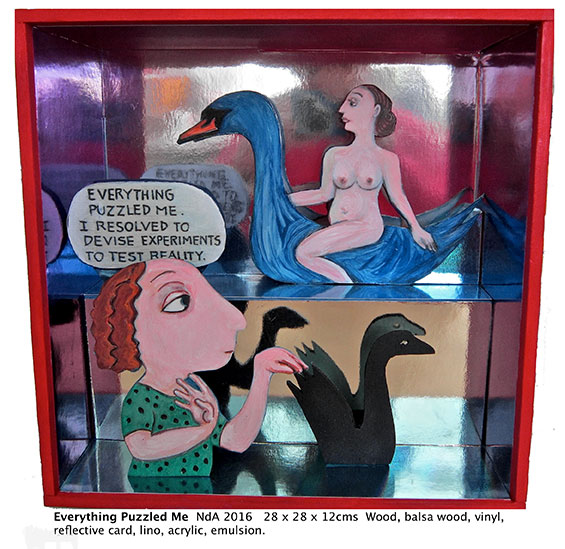 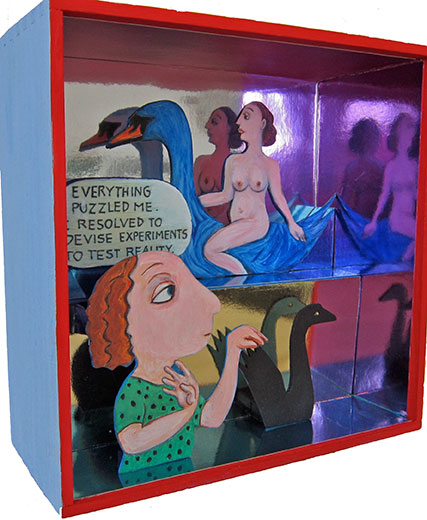 It's my umpteenth birthday and this is a lit candle in the photo, proving that I'm still here on the 7th of August 2016. 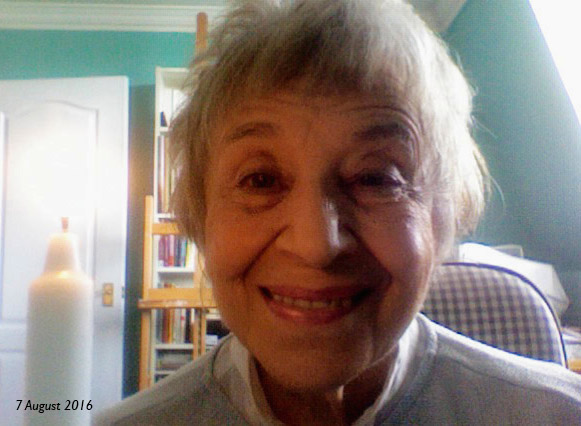