For those who don't know Léo Ferré here he is with  Comme à Ostende. There are many videos of Ferré on Youtube, including this song performed when he was much younger and stronger-voiced than in this version, but I like it and his appearance suits the words. (Lyrics below, with my translation).  Ferré was a poet, composer, classically trained musician, conductor and actor,

Ferré, along with Georges Brassens and Jacques Brel, belongs in the French 'chansonniers' tradition  of troubadour poets/composers/singers. They were by no means pop stars although they eventually attained popular acclaim and respect and have influenced countless serious artists internationally. 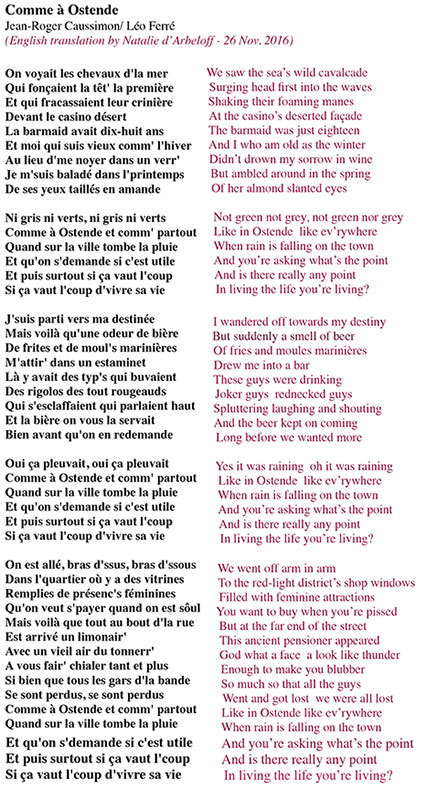 I said  I'd do it so I did. I think it's a bit better than the other translations I've seen out there but I know it's not perfect. I offer this to anyone who wants to sing along with Brel in English. Please form an orderly queue. 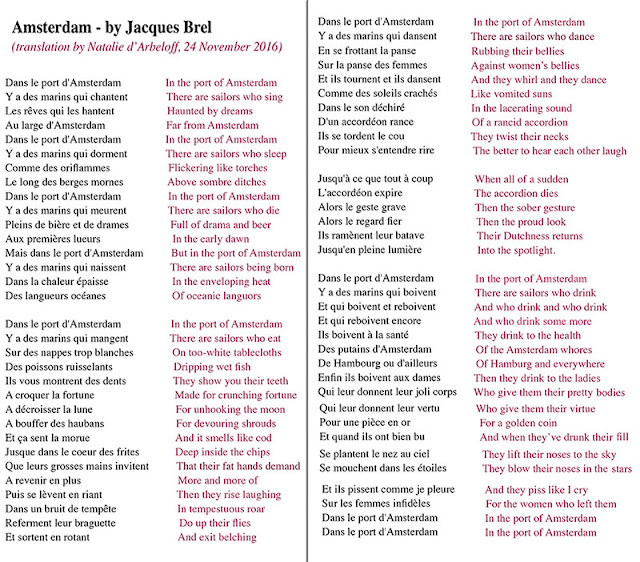 Posted by Natalie d'Arbeloff at 3:28 am No comments:

TO BREL OR NOT TO BREL


Acting on a recommendation by English Man, I went last night to the wonderfully nostalgic Wilton's Music Hall  for a performance by Camille O'Sullivan of some Jacques Brel songs. I'm very familiar with and a long-time fan of Brel but had never been to Wilton's or heard Camille and both were definitely worth a trip to the eerie no man's land that is Aldgate East at night. Miles of deserted glass-fronted office buildings dotted here and there with sad, empty little fast-fooderies like a jumble of ill-assorted type faces in a short-sighted sentence. Then a leaking railway bridge, forlorn boarded-up shops and then....a sign! 'Wilton's Music Hall' with an arrow pointing to a side alley, voices, lights, warmth, people crowding into an ambiance that is not of this century and all the better for it. My seat was directly behind a spiralling carved wooden pillar redolent of all the hands which stroked it over the years and I forgive it for making me crane my neck to see Camille O'Sullivan on stage.
She was a seasoned, confident performer, chatting in an intimate Irish lilt as if she knew everyone in the room (maybe she did) but when she sang, the voice soared powerfully away from you and was all about her - and why not? It made for a great show but.....it wasn't Brel enough for me. I do not mean that she should have impersonated him - of course there are innumerable covers of his songs. It's just that if you've seen and heard Brel, well, I don't think Camille really gets him. Partly it's the execrable English translations and partly because her emphasis is on showbiz whereas Brel was all about the words, the content of his poetry, articulated musically, forcefully, making sure his 'message' hits you - he was a kind of preacher, like it or not, and when he was bad he was lousy and when he was good he was sublime. Here is one of his sublimes, in my opinion. You really need to hear the words but I haven't found one decent translation on the internet. I'll search again or might have to do it myself.

UPDATE: Just done it. Could be better but anyway.... See next post.
Camille was best in the lusty, boisterous numbers which she performed with punk-ish and puck-ish energy but she lost it in the quiet ones. Ne Me Quitte Pas was sentimentalised out of existence. She did sing a few of the original verses in French but that couldn't erase the saccharine of the English translation or her catch-in-the-throat little girl interpretation.
I never understand why some excellent singer/songwriters accept to have their lyrics translated so ineptly - no self-respecting poet or novelist would. But anyway, it was a good evening and I'm glad I was there. Here are some pics I took, behind the spirally pillar, in dim light. 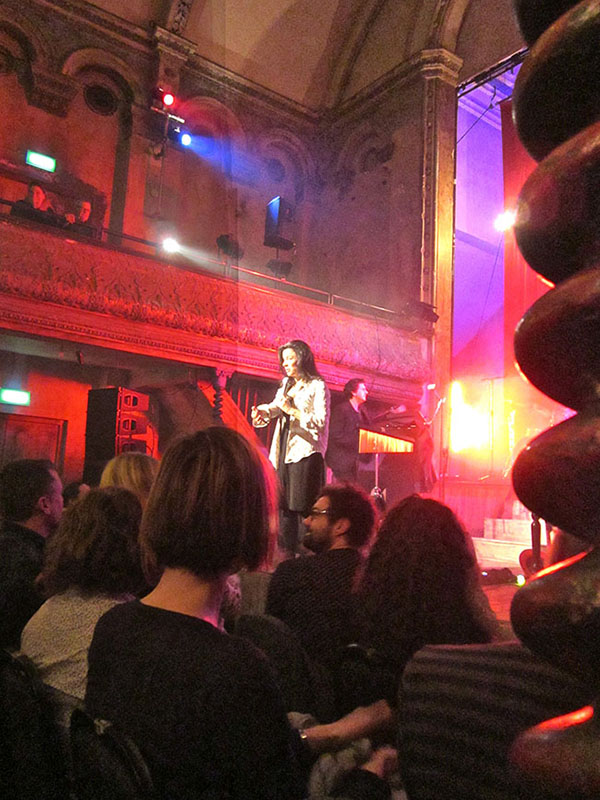 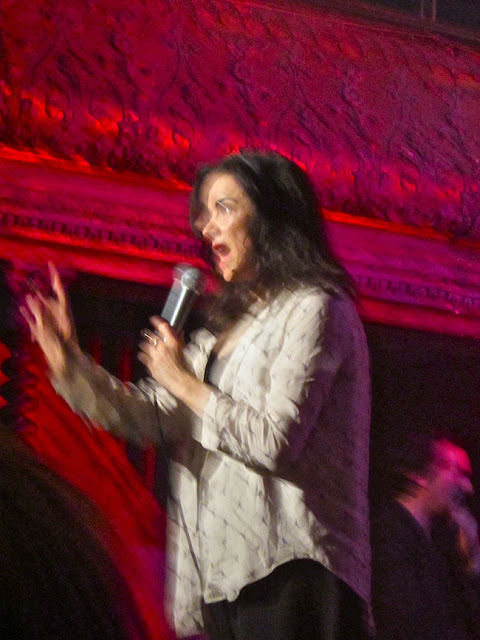 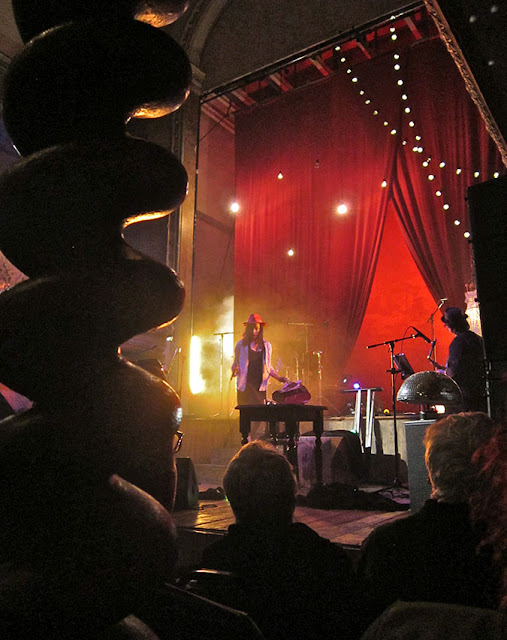 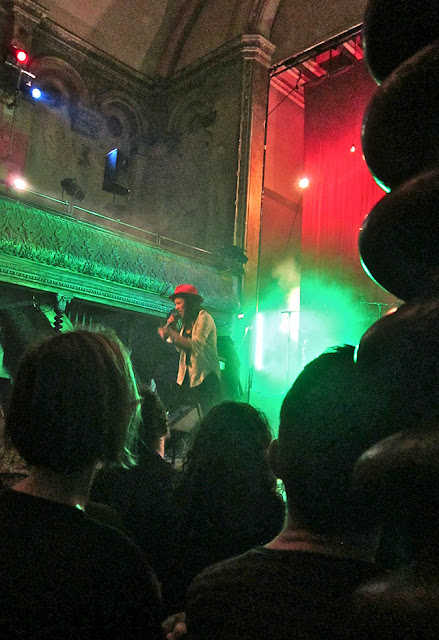 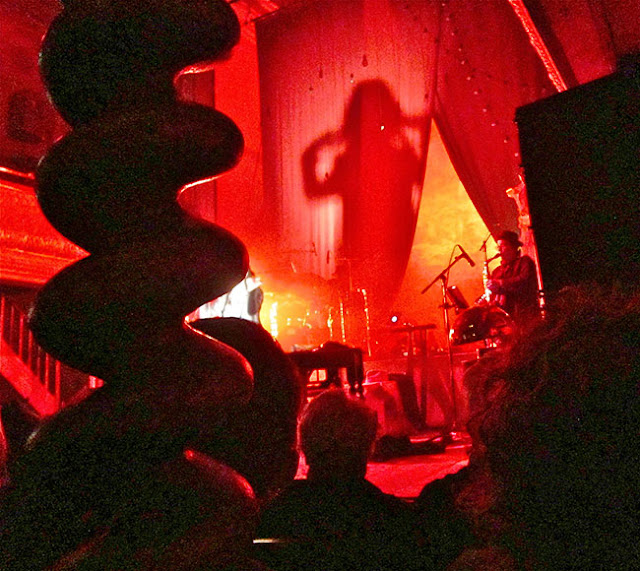 Posted by Natalie d'Arbeloff at 2:08 am 2 comments:

Fantasy isn't politics (well, this could be argued) so I'm allowed to break my resolution for a minute.

In case people ouside the UK don't know what this is about, the government has just awarded the Queen a 66% pay rise to fund a £369m ten-year refurbishment of Buckingham palace, in a time of austerity (for everyone except the wealthy) and of drastic cuts to the NHS, education, libraries and other essential public services.

I couldn't resist a What-If fantasy.

P.S. It seems to have provoked a discussion on Facebook. Anyone interested can see it here.
Posted by Natalie d'Arbeloff at 7:17 pm 4 comments:

That's it. I'm not posting about politics anymore. I've bought a ukulele. 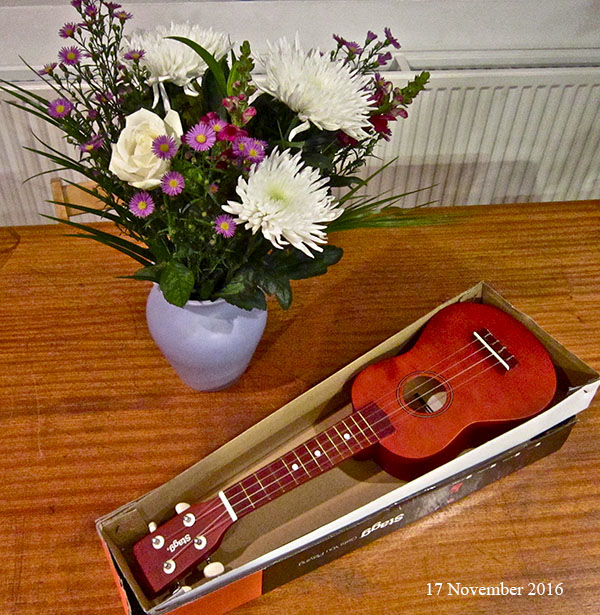 I've been fantasizing about who would defeat Donald Trump in 4 years time and came up with my ideal candidate.

She would be black or Hispanic or mixed race. She could be of any or no religion. Her personality would contain ingredients of Michele Obama, Oprah Winfrey, Beyoncé, Odetta, Dolly Parton, Tina Turner, Naomi Klein, Vivienne Westwood, Michael Moore, Angela Merkel, Bernie Sanders and a few others, but she would be uniquely herself.

She would be friends with people of every race, class, nationality, religion and sexual orientation. She would be well and accurately informed about social, cultural, economic, environmental and political problems at home and in the rest of the world. She would be able to identify every country on a map and probably speak one or more languages other than English. She would be unafraid, bold, outspoken, able to dish out as well as take criticism, but also kind, attentive, perceptive and observant. She would have a sense of humour. She would be able to sing and dance and write her own speeches.

She would transform politics by removing spin, soundbites, sanctimoniousness, snobbery, sneering, suspicion, sneakiness, slander, subservience and scoundrelism. She would speak her own mind, in her own words, with intelligence, insight, inspiration and factual information. Some day she'll come along. 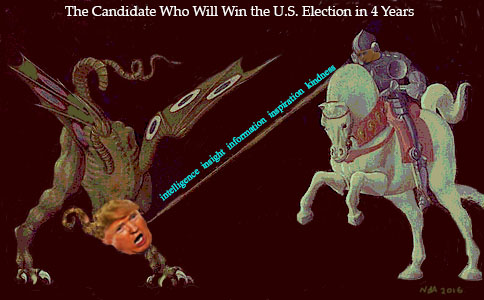 I borrowed parts of the image from Paolo Uccello's St.George and the Dragon, courtesy of the National Gallery, Creative Commons licence.
Posted by Natalie d'Arbeloff at 11:32 pm 10 comments:

THE PLAY'S THE THING: WHY?

Obama and Trump meeting in the White House today, making the necessary diplomatic public statements, with much hemming and hawing to conceal their true feelings. What strikes me is this: why the theatre? Everyone knows what these two men think of each other and have said about each other. Why couldn't they just have spoken straight from the shoulder and the heart? Just a few seconds of genuine unrehearsed sincerity would have instantly introduced a constructive note into the whole divisive election aftermath. Maybe Trump could even have apologised to Obama for his 'birther' and other insults - wouldn't that have been something?


I'm always bewildered by the theatrical aspect of political discourse and the fact that we generally collude in the fantasy that what is on the stage is real, whilst being aware that it is a play - the manner in which most politicians speak their lines makes this perfectly obvious. But occasionally, rarely, a politician comes along who doesn't play the game and who talks like ordinary people talk when they're saying what they actually think. Not that the content is necessarily better: sincerity doesn't guarantee truth or wisdom or wit. But at least you get to know who you're really dealing with.

Trump played the 'sincerity' role in his campaign, the ordinary guy, one of us. Except that he's not and it's a carefully crafted script by a very crafty individual who has been play-acting all his life.

Obama in the White House must have learned how to play the game but, listening to him and watching him, you can't help noticing that it's stressful for him to play it. In those moments when he doesn't have to act you can almost hear a sigh of relief. It's what makes him endearing, whether you have agreed with him or not.

The Obama family ring true. The Trump cortège will be reality television in a White House setting. Anybody want to write the script? 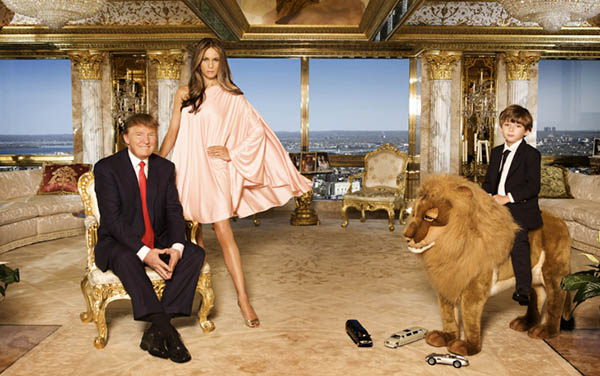 CONDOLENCES TO AMERICA, TO THE WORLD

CONDOLENCES TO AMERICA, TO THE WORLD.

Victory for the racists, the mysoginists, the wall-builders, hate-mongers, fear-mongers, the fascists, gun-toters, bullies, demagogues, egomaniacs, money-worshippers, the ignorant of and indifferent to everything beyond their own barbed wire-protected enclave.

Courage to everyone else.

I want to quote from a post today by James Brush in Austin, Texas:

So what now? I’ve been teaching for 17 years, trying--often not succeeding, but trying--to work against casual bigotry, bullying, incuriosity, anti-intellectualism and white man entitlement. How does one go on now? How does one try to say to our kids--especially the gay, hispanic, immigrant, black, and girls--that our schools are “no place for hate” when our country clearly is. That so many revel in it.


How do we explain to our son that a man who makes fun of other people for being different, who based his campaign on the idea that so many of the people we know, care about and love do not count because they are of different races and ethnicities, they are LGBTQ, they come from different corners of the world, and have different religions or none can use this ugly message to win the presidency? That so many people are ok with this. I’m not sure what to say or do.
But dammit, I’m going high. And on the side of love.

HOT OFF THE PRESS

Warmth and therefore joy are back, thanks to a sympathique, efficient, careful and knowledgeable young Polish-German heating engineer I had the good fortune to chance upon.

He instantly identified the problems (one of which, embarassingly, was spent batteries in the thermostat) and dealt with them all, no hanging about, in less than an hour, for a reasonable fee.

Up all night wearing coat plus scarf plus two and half sweaters plus tights plus warm trousers but still cold, too cold to get into bed because if I fell asleep I might not wake up early enough to phone boiler repair people.

My flat is currently excruciating because the boiler stopped working and it's all because a plumber I called about two weeks ago to fix a minor flaw (not a heat-cancelling flaw) did Something to the boiler. Something he explained at great length but with little clarity, involving a piece of rubber tubing and a bucket. When he was finished and paid he said he'd come back as soon as he returned from holiday because the boiler needed a new tap kit and he'd bring this. The pressure gauge went down to zero and stayed there but the heating still worked. This boiler has worked well for several years but yesterday it packed up - nice timing! Cold weather coincided. I've left progressively urgent messages on said plumber's phone, at first cheerful, then apologetic, then terse, then angry, then tearful etc. No response of any kind from him. Of course.

So I've been sitting in the kitchen leaning against my electric oven, waiting for a new boiler repair person to arrive. But that won't be for another couple of hours, so I've been thinking, as one does.


I'm incredibly, impossibly, unfairly privileged. My suffering consists of a malfunctioning boiler on a rather cold day. I'm not homeless, I'm not sleeping on cardboard in the street, or abandoned, lost in a burnt-out jungle in Calais or elsewhere. Compared to millions of people nearby or far away on this planet I'm wallowing in luxury, unimaginably fortunate. So fortunate that it's shameful. Yet I'm dependent on the comforts I take for granted. Even temporarily deprived of them I'm ready to rage at the failure of people and technology to provide me with the instant and efficient services I demand, pay for and can't live without.

I know my shame is theoretical, merely a blog post to while away this cold time while I wait for warmth to be restored.