A happy New Year to all and may light pour in through all the cracks. 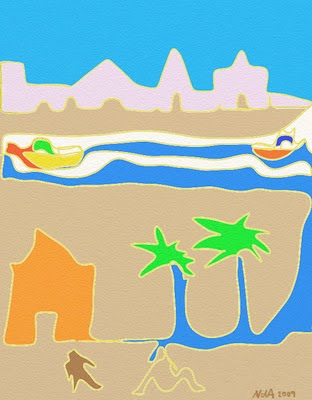 Posted by Natalie d'Arbeloff at 4:42 am 2 comments:

SERENDIPITY AND THE LOST PORTRAIT

Here's one of those unbelievable-but-true stories that internet communication occasionally, or maybe frequently (what do I know?) engenders.

Out of the blue cybersphere I got an email the other day from someone whose name I recognised though I had only met him once in 1981 for an hour or so while I was painting his portrait at the house of a friend. In his email (he found me via my website) he reminded me of the portrait and wondered if I'd ever finished it.
Of course I remembered and I replied, confessing that not only did I not finish the portrait but when I ran out of canvas some years later, I...um... painted over it. I also remembered that I had taken a snapshot of both sitter and work in progress.

Immediately I found the rather blurred and discoloured photo, scanned it, enlarged it, and kicked myself repeatedly: the painting had been a good start, a promising portrait, and it was a stupid fool idiot thing to destroy it in order to recycle the canvas. Economy and indigence are no excuse.

I apologised to Rennie Walker (he was the sitter) and in a sudden burst of contrite energy, assisted by Photoshop, I extracted his portrait from the snapshot and started working on it with virtual brushes on my graphic tablet. When in the wee hours of the morning (as is my wont) I was satisfied with the result, I sent it to Rennie along with a scan of the original photo. Below you can see both.

My thanks to that giant multi-faceted internettish god who makes such unexpected serendipitousness possible to have re-introduced me to the extremely talented Rennie, whose websites, poetic and professional, you must definitely visit. 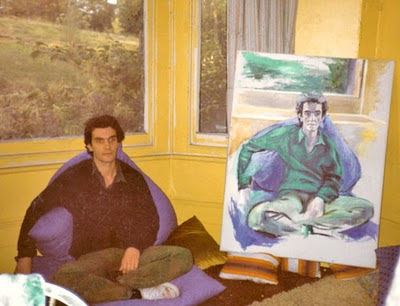 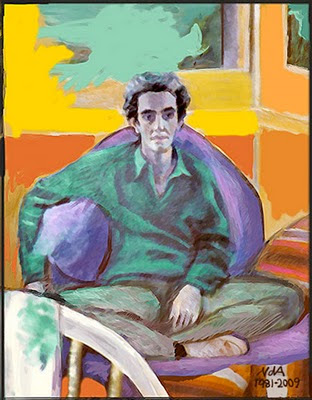 Posted by Natalie d'Arbeloff at 3:56 am 2 comments:

Since these holidays are about family, however you celebrate, alone or apart, here's a fantasy family for you, perhaps an ideal one, perhaps just an ordinary one, a little bit strange in a good way.


With warmest wishes to every single person who passes this way, I hope you'll stay a while. May the New Year be kind to all of us on this troubled planet.

(This is actually a black and white photo of an old, highly textured painting of mine which I've scanned and coloured digitally). 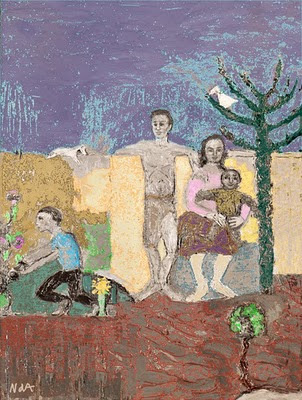 Posted by Natalie d'Arbeloff at 4:32 am No comments:

In Tavira I noticed that there is an artists' association and gallery called Casa 5 and when I got back home I looked it up on the internet and found that they have an artists' residency programme. After a friendly exchange of emails, I sent in my application.

Obviously I was just obeying orders from that cunning life-coach in the sky who thinks I need a kick up the cosmic derrière to propel me out of my little swivel chair in front of my little screen in my little London routine. Obviously my application was accepted. I'm all shook up!

So, around the middle or end of January I'll be going back for about five or six weeks, staying in Casa 5 and working on paintings, drawings, collage, video etc. based on Tavira - the town, the people, the ambiance, whatever inspiration strikes while I'm there - with an exhibition in the gallery at the end of my residency. I'll have my laptop and WIFI so blogging will continue, if perhaps intermittently (as usual).

Here's an appropriate graffiti I discovered on a wall in Tavira - I didn't know when I took the picture that it would be so appropriate. 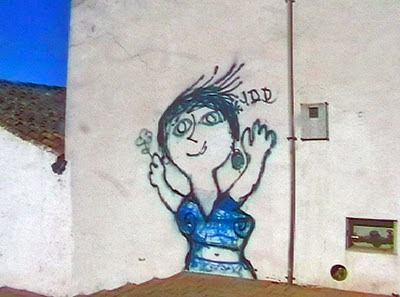 NOT THE TURNER PRIZE 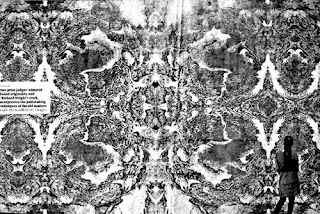 You've seen Rorschach ink blots haven't you? Some of you will have tried spattering black ink on a sheet of paper by flicking a brush, folding the paper in half, carefully smoothing it down and then opening it to reveal...taraaaa! A map of your unconscious? A Turner prizewinning work?

Here is a little demonstration of how you could create your own Turner prizework in approximately fifteen minutes, or less if you leave out making Photoshopped versions. Adding drops of water and oil to your ink spattering  can add more textures. Transferring your masterpiece to a wall, cupboard, curtain or tee-shirt and applying gold leaf to it will take a bit longer but is perfectly feasible. 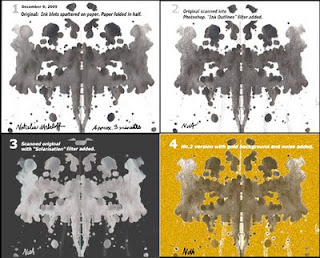 Yes, the lion you saw in the slideshow is my cherished lion - or rather his sun-bleached and rain-battered twin. I was walking along the banks of the Gilao river in Tavira when I suddenly saw him, tied to the top of a brilliantly coloured fishing boat, looking around with a bemused expression. Call it coincidence, chance or destiny, but I find it thrilling that the twin of a stuffed lion I bought from an Asian shop in Camden Town should turn up to greet me on my very first day in a small town in Portugal. How likely is that?

Anyway, I fell in love with Tavira. Bits of it had a nostalgic familiarity, flashbacks of Paraguay or Brazil or Mexico. Other parts entirely different, Moorish, blue-tiled, whiter-than-white rough plaster walls, intricate baroque woodwork, latticed windows, and doors, doors! Amazing doors of every colour and texture, works of art in their own right. Short, human-size palm trees and very tall phallic ones, shaved so that only an ecstatic green tuft emerges from the crown, the rest of the bulbous trunk naked and scaly.

At this time of year the streets are quiet and the unpretentious cafés are frequented mainly by locals, a few polite tourists and expat residents. I sat there at ease, drinking café con leite, my forgotten Portuguese coming back in fragments, spattered with Spanish and Italian, and I thought: I could spend some time here, get back into painting, live the small-town life. The more I caressed this thought, the more exciting it felt so I got up, walked into a nearby estate agent's office and asked the dapper white-bearded man at the desk if he had any apartments to rent in the centre of town. He was Swedish, spoke perfect English, and said there were no rentals on his list at present but his colleague down the street might have some. He put a "Back Soon" sign on the door and walked out with me.

Just round the corner he pointed to the top floor of a balconied house, looking out towards the river and the Roman bridge. "There's an apartment for rent up there", he said. "Oh!" I said, "When could I see it?" "Right now," he said, "I have the keys". We walked up two or three flights and entered a delightful living room, marred only by an after-thought, a dangerously vertical wooden stairway in the middle, leading to a low-ceilinged loft bedroom with its own bathroom. Downstairs was another bedroom and bathroom and a modern kitchen. In a moment of madness I thought, yes, this is it! Fortunately the price was too high and that loft stairway too lethal.

Then we went into another agent's office across the street and the young Portuguese colleague said there were a couple of places he could show me. So my new Swedish friend and my new Portuguese friend together walked me around town and showed me two apartments, both affordable, with magnificent terraces. I said I was interested in renting for a couple of months, probably January-February, but the owner of the flat I liked best wanted a twelve-month tenancy and the other place seemed too big for me. I left my address with both agents and they said they'd let me know of anything that might come up.

When I met my brother for dinner later he was flabbergasted by my unexpected coup de foudre for Tavira and the speed of my action-on-impulse. Well, I said, if it happens it will only be for a couple of months and if it doesn't happen, that's okay. He was an excellent guide, though he only moved to Tavira in July (excruciatingly hot then and in August) and we went to his favourite spot, reached in about fifteen minutes by motorboat, the Ilha de Tavira - an idyllic island, endless expanse of pristine golden sands, deserted in winter, a nature reserve where batallions of gulls stand at attention, concentrating intensely on the waves crashing against the shore. What an error to say that birds are flighty! They are probably the most focused creatures I know of. I wish I was as focused as a bird.

Now I must focus on tasks back here at home, finish La Vie en Rosé and other unfinished things, and if there's a sequel to the Tavira adventure, of course I'll blog it. I might post some more snippets of video but there's far too much and it needs drastic editing. Strangely enough I didn't do any drawing, probably because it was too drawable and I didn't feel like adding to the vast heaving storehouse of picturesque postcardy scenes of picturesque postcardy locations all around the world.

If I ever do paint in Tavira, I would try to find a different way of communicating, filtering, translating my experience of the place into a visual language. That's what I find so fantastic in Van Gogh's paintings of Arles: they have become as popular and commercial as postcardy postcards, but the actual works are never merely picturesque. He focuses on the landscape or the chair or the sunflower with the same kind of attention that the gulls give to the waves, a hungry attention, purposeful, passionate, a desire to assimilate the object. Not at all the same as cool observation or skilful representation.

Posted by Natalie d'Arbeloff at 4:35 am No comments:

BACK FROM BEAUTIFUL TAVIRA

Will write about it later today. Meanwhile here's a slideshow.

Posted by Natalie d'Arbeloff at 1:16 pm No comments: