Vaguely chronological, a few examples chosen out of a lot of work from different periods of youthfulness. During and after the Art Students' League, thick marker pen drawings and also thin line ones in pen or brush seem to predominate, the latter mostly made during a period when I was privileged to be one of Jack Tworkov's students at his studio in lower Manhattan (next door to his friend and fellow abstract-expressionist Willem de Kooning. Jack was an insightful, inspirational teacher, never imposing his own style but encouraging me to discover and develop my own path.

I've had only three significant teachers in my art-life and they were very fine painters as well as brilliant teachers: Jack Tworkov, Henry Hensche and Pierre Bressoud, the Beaux Arts professor. I can't find any photos of Bressoud but my memory of him, permanent Gauloise on lip and black beret on head, appears (pp.16-17) in My Life Unfolds. 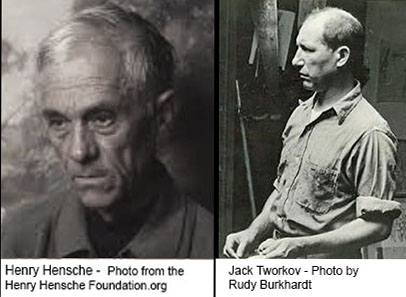 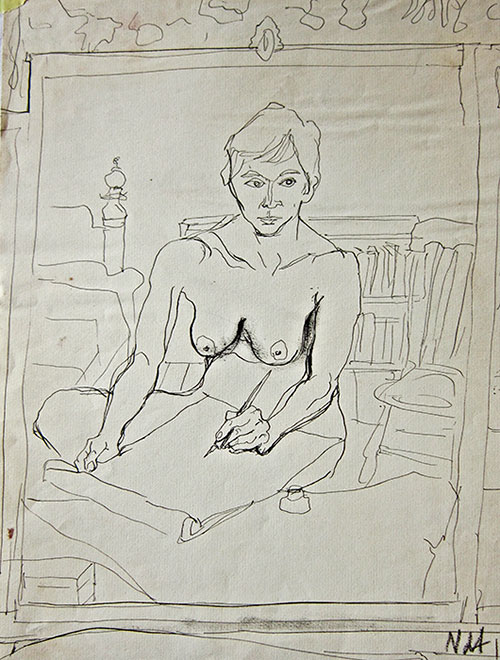 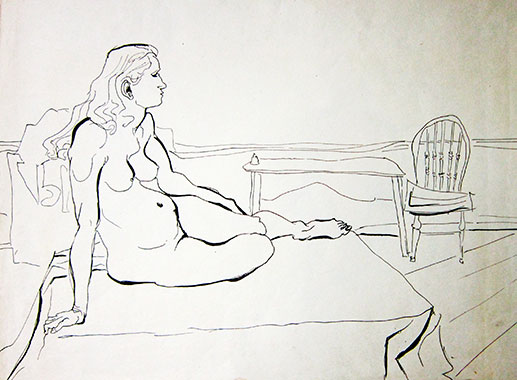 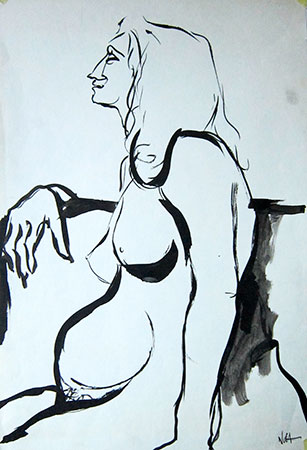 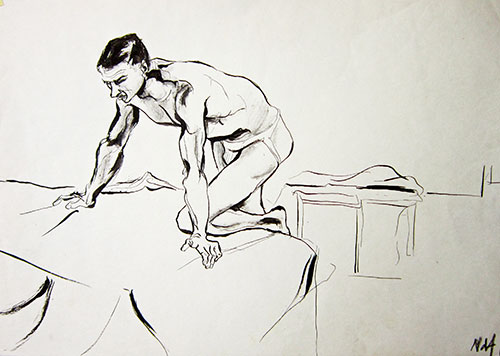 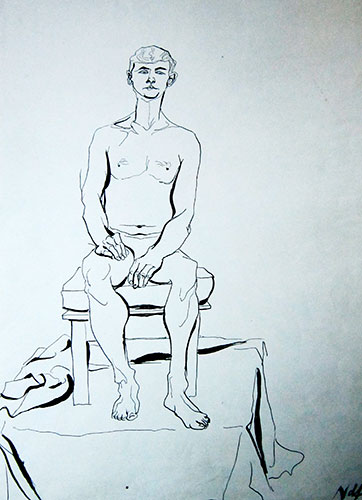 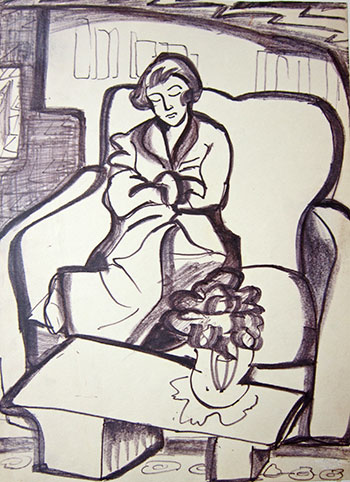 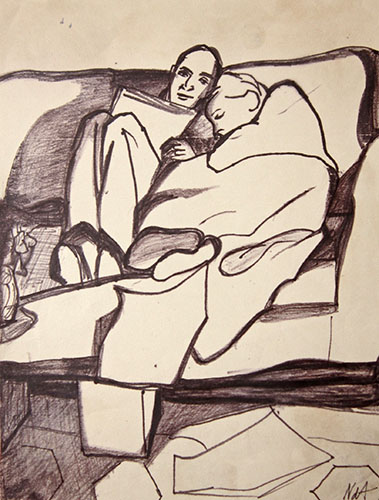 Old Masters can't have all the attention and who says I won't be up there with the great old mistresses (single or double entendre) when I'm no longer here?
But let's go back to youth. I know I was sixteen when I did the drawing below because it's of my baby brother in the first year of his life. 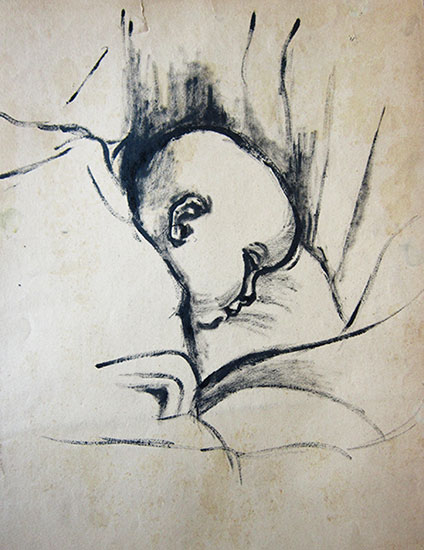 I was in Rio de Janeiro, under protest, when I drew the next self-portrait. I had wanted to stay in Paris and continue lessons with my adored Professeur but my father said no, I must go with the family to Brazil, I was too young to be alone in Paris. There was a big argument. I lost. 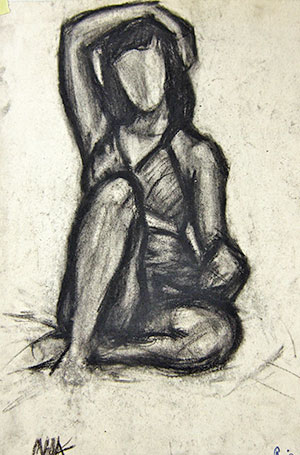 After Brazil there was New York and I enrolled in the legendary Art Students' League, the most unorthodox art school in town. A roster of well-known artists were part-time tutors and there was a whole menu of other classes which you could attend if you wanted to. It was a free-wheeling, stimulating, heady atmosphere and my first experience of belonging in a community of people who took art very seriously and wanted to make it their life's work. I was thrilled, fired up, not least because of the competitive challenge. I wanted to show off, prove I was better, bolder than the other, mostly male students, some much older than I was. They gave me a nickname (Nippy) and I got lots of attention.There was no formal teaching as such - nothing like my Paris teacher's admonitions, vigilance and discussions. The tutor would come in once in a while, say a few words, suggest an exercise, but mostly we were left to our own devices. The art-mood of the period was towards expressionism, stylisation, abstraction and I was certainly influenced by this trend but what I'd absorbed in Paris about intense observation of the model never left me. Below are a few of the many life-drawings I did at the time. 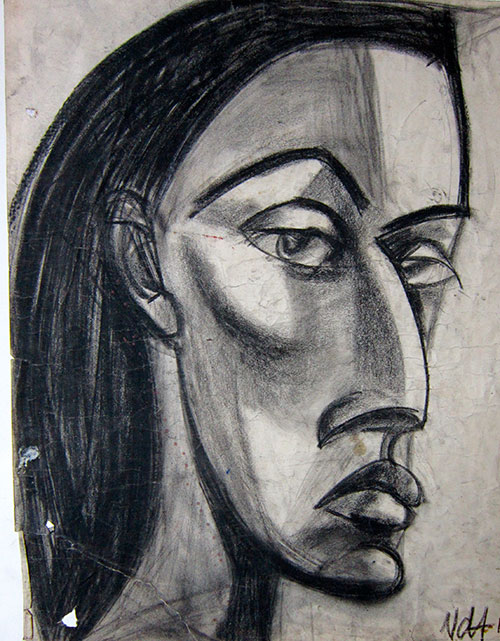 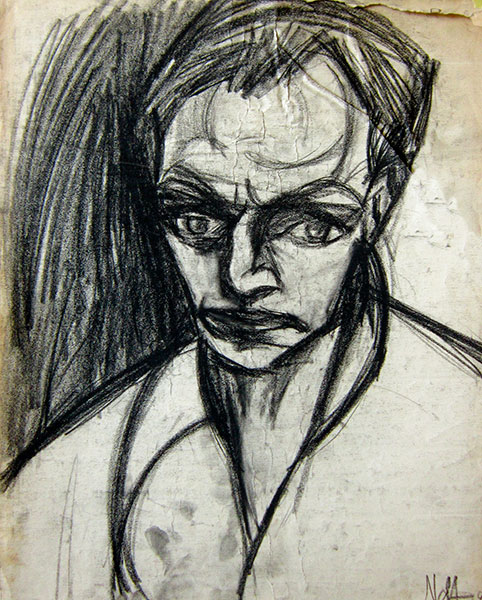 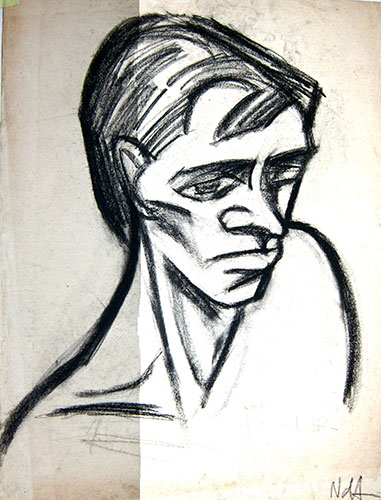 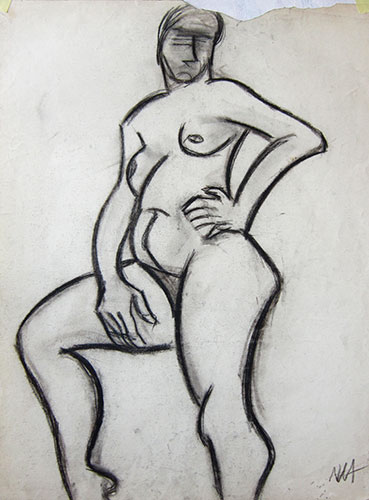 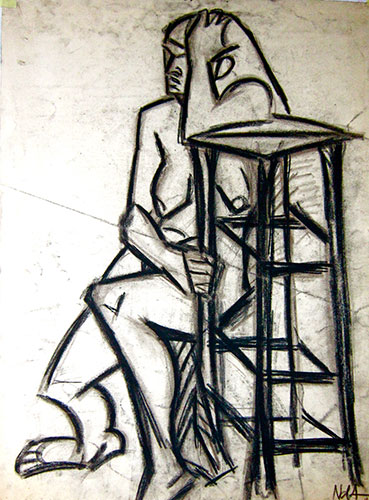 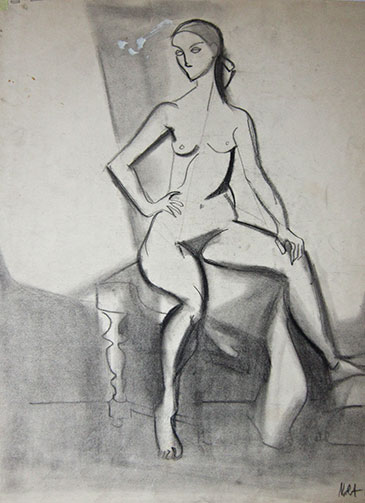 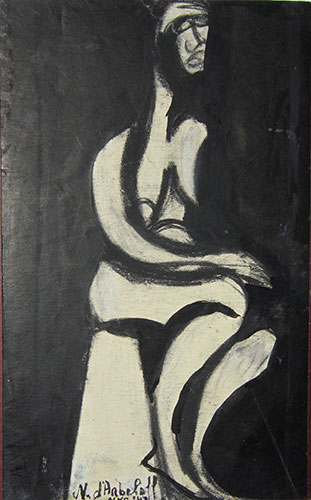 Much more to come.
Posted by Natalie d'Arbeloff at 1:10 am 6 comments:

I don't know why it's become so hard to write a blog post or to write anything at all, even a letter. You could say I'm blocked - writer's block, artist's block, blogger's block. Do blockers (those who are talented at blocking other people) ever suffer from blocks? Rhetorical questions aside, putting one word in front of another in some vaguely interesting manner has become a chore to be avoided by any means and there are always plenty of avoidance means at hand. Yet I still have a sense of duty (how vain!) to turn up and remind anyone who happens to be passing by that I'm still here. Or maybe to remind myself that I'm still here.

So: I've been looking through portfolios of my old..very old..drawings and will pin some of them up on this blank wall. It's both annoying and challenging to re-visit these youthful works and conclude that many are better than anything I've done in recent times. I don't believe the theory that artists' best work is created in their youth and anyway I can't speak for anyone else. But I want to look into possible reasons why some  - I've picked out around 100 drawings - of my early works seem to achieve something (I'm not going to try and define that something) which I'm not achieving now.

I can easily teleport myself back to those years (17-18-19 years old) and remember clearly what I felt when I was drawing then. I believed in Art, I was romantically in love with Art, it was my mission. I wasn't hesitant or doubtful but confident in my ability to take on anything Art could throw at me. The first five large drawings below were done from sculptures in the Louvre where my tutor, an école des Beaux Arts professor, would meet me every day and teach me to draw in the classical manner, with plumb line and pencil held out at arm's length to measure proportions: "Aplomb! Proportion!" he would repeat like a mantra. I can still hear it now. Each drawing took weeks and he was wonderfully severe but after a while, when he saw that I was making real progress, we became friends. He said we were now equals and that I could draw "like a man". Yes, this was before feminist consciousness-raising but my joy at this verdict was boundless. 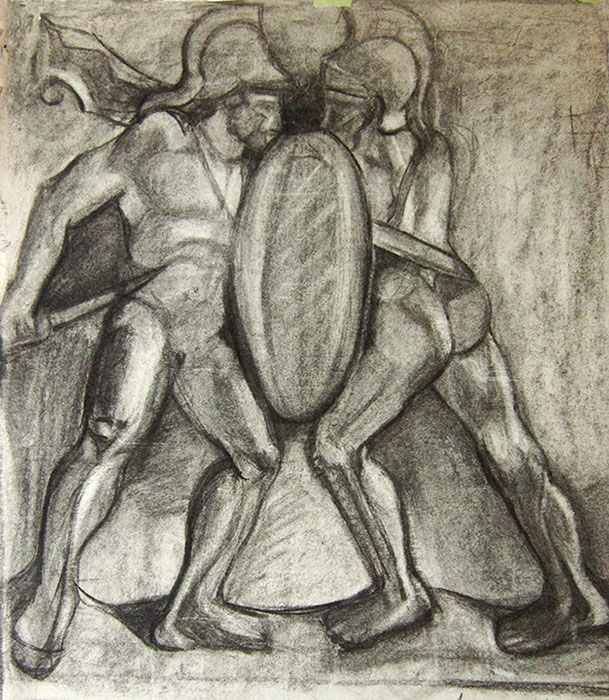 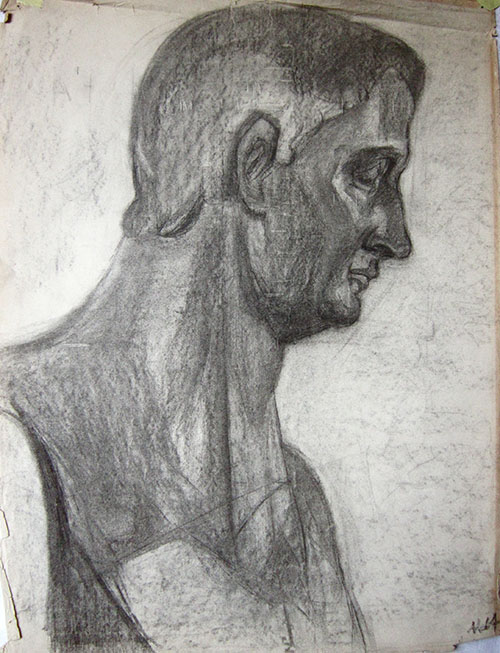 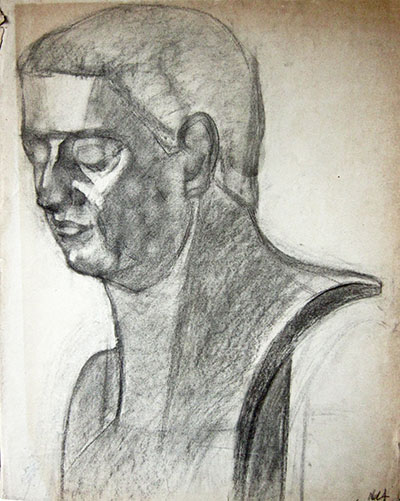 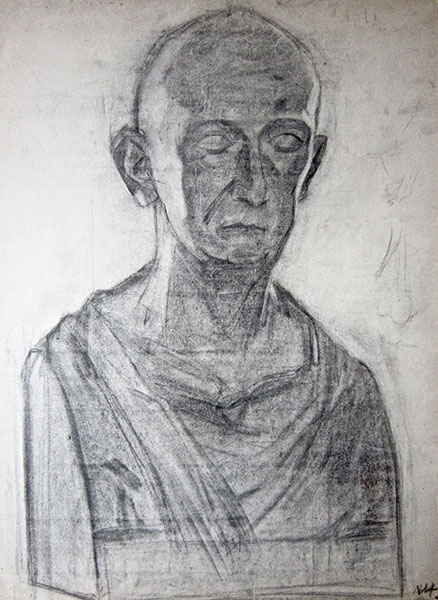 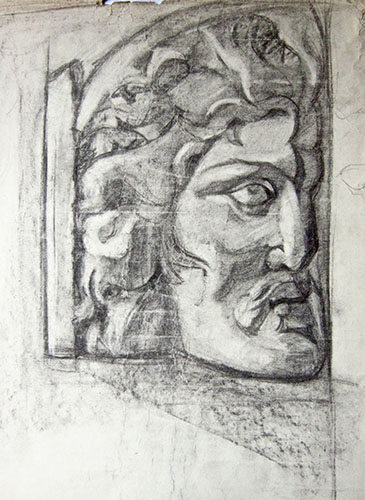 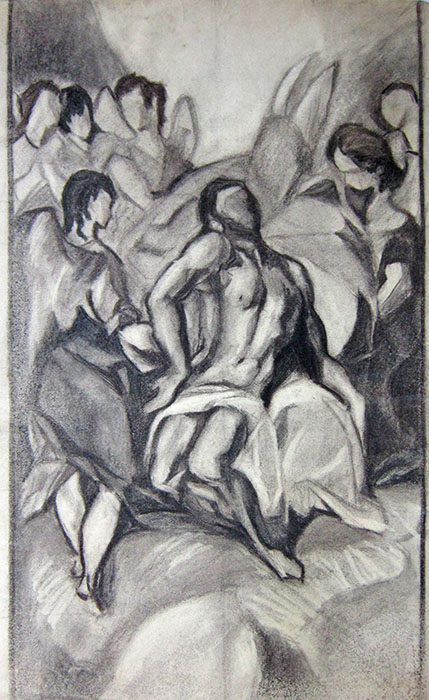 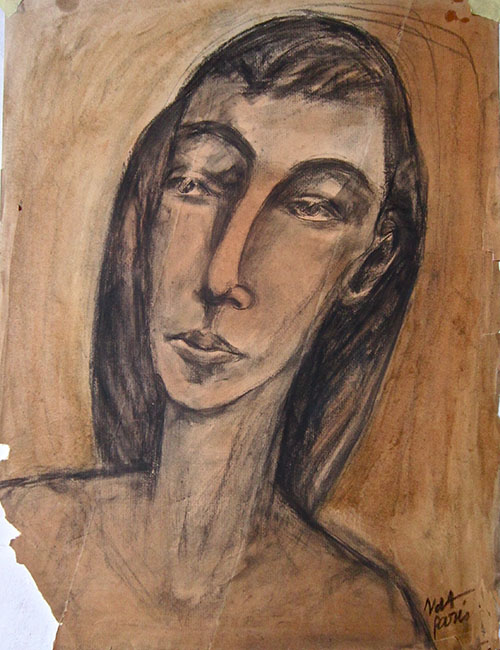