THE ACCEPTANCE OF THE THOROUGHBASS

Okay, today's virus-poem was engendered by the blind random method. The book was Harvard Concise Dictionary of Music, page 454. The line I landed on:

THE ACCEPTANCE OF THE THOROUGHBASS

Alas poor Bass
before becoming thorough
she was a dilettante.
Nobody knew her sorrow,
the reason she was so gaunt.


She suffered from insomnia,
that's right, she couldn't sleep,
then she met the guru Omnia
who said: stop counting sheep,
count Oms instead, one at a time,
I promise you'll be fine.

That's how Bass became thorough,
now accepted in every borough.
The moral of this story, plain to see,
better thorough than flibbertigibbety.
Posted by Natalie d'Arbeloff at 4:14 pm No comments:

I'm embarassed to be posting another poem because I'm not at all a proper poet. But some kind of virus is putting rhymes into my head, so what can I do? I have to get rid of them.

There's something about making words rhyme, it's not only fun but also a sort of cave you fall into where innumerable connections lie in wait and all you have to do is link them up by rhyming. It's as if we have an in-built receptor for rhythm and we automatically respond to beats and measures, whether in music, dance, drumming, chants, games.

Here's one which appeared a little while ago, but not by the Blind Bookshelf method. It was just there.

The silver spoon was out of tune.
Get me the tin one, the artist said,
the one I keep under the bed
to remind me I am working class
and wasn't always such an ass.
With silver spoons I made my name
and now I'm in the hall of fame.
At stately homes and clubs I'm feted
at Glastonbury I'm awaited
I know damn well I'm over-rated
but hey, they pay.
what can I say?
Get me the tin spoon, there's a good girl,
after the show I'll give you a whirl.
Posted by Natalie d'Arbeloff at 7:06 pm 7 comments:

The experiment in inventing rhyming poems from randomly found first lines has been joined by a few more people on my Facebook page.

There's nothing new about such a process. Innumerable visual and literary methods have long been used to release the mind from the effort of rationality, allowing spontaneous invention to flow - games like Exquisite Corpse or Consequences, finding images in clouds, stains, inkblots and so on. Of course this doesn't mean that such methods are magically going to produce masterworks (or even minor works) in any medium at all. But there's no doubt that something enjoyable, captivating and stimulating to the imagination happens when you give yourself permission to follow the rules of an apparently nonsensical game, such as this one.

In today's blind bookshelf-stroking, I pulled out "Numbers: The Universal Language". Page 47 gave me these starting words: Marking the empty place.

MARKING THE EMPTY PLACE
Oh now you're asking me to face
an ancestor I cannot trace
a secret tale I do not know
buried so deep so long ago....
Oh dear oh dear oh dear oh dear oh!
Don't make me go back to zero!
The empty place shelters a ghost
whose face ressembles me the most.
If she or he could speak they'd say
Please go! Oh please do go away,
there's nothing here for you to see,
only zero and infinity.

Posted by Natalie d'Arbeloff at 10:27 pm No comments:

THE WOMAN WHO HOWLED AT THE DOG

This time, the first sentence didn't arrive suddenly when semi-conscious, however I was still in bed when I made it up this morning.

THE WOMAN WHO HOWLED AT THE DOG

The woman who howled at the dog
appeared on everyone's blog.
Poor dog, blogged Gail,
put the woman in jail.
Commented Guest,
i know the dog, he's a pest.
Ha ha, added Stu,
she stepped in his poo!

The world is going to hell,
I howled to my darling dog Nell
Come on Nell let's howl our sorrows
there may be no more tomorrows.
Posted by Natalie d'Arbeloff at 3:43 pm No comments:

I swear I didn't open my eyes when pulling the book from its shelf or choosing the page with the sentence. (The book is: Francis Bacon: Taking Reality by Surprise)


INTRODUCING AN ELEMENT OF ACCIDENT AND CHANCE
Mortimer jumped on the table and began to dance.
The board of directors was not impressed
unanimously they shouted "Next!"

When Mortimer fell off the boardroom table
he laughed and said "Now I'll be able
to claim for accident insurance!"

The above is an example of accident AND chance.

I don't know what's going on, maybe the flu has tickled my unconscious, but that damned Lear sentence is nagging me again.

The man who typed Lear
for his PhD
wanted to make his concept clear
desperately wanted the world to see
the play's the thing:
the THING, you hear?
The typewritten sheets in their ring
binder ARE my PhD!
Why oh why can't you see?
Posted by Natalie d'Arbeloff at 6:21 pm No comments:

AN EXPERIMENT IN MILKING RANDOMNESS

Boosted and bolstered by the response to my un-premeditated Man Who Typed Lear, I've decided to try a daily experiment. You're all invited to join, if so inclined. Random, provocative sentences don't often appear when falling asleep - at least they don't to me.

So, to trigger something like that state deliberately, here are rules of the game. This is for fun, not literary glory, but give it some care anyway.

1. Close eyes tightly (no cheating) and approach bookshelves.
2. Run hands quickly over book spines and pull out one book.
3. Eyes still shut, put book down and open at random, placing finger anywhere on page.
4. Open eyes and take one sentence from the place marked by finger.
5. That is the opening sentence of your poem, which must rhyme, and must be completed the same day, preferably the same hour.
6. When finished, give the title of the book you got the sentence from.
7. If you wish, post the poem here, and/or on your blog and/or FaceBook.

Here's my first one - guess what book the first line is from? (answer is below)

FOR THAT WRONG COMMITTED MUST YOU KNOCK
the shit out of that wrong old block?
Listen here mister prophet
from your wisdom I cannot profit.
I'm the chip off that old block of wrongs
and out of it I make these songs.

(The first sentence is from Khalil Gibran's The Prophet)
Posted by Natalie d'Arbeloff at 6:16 pm 4 comments:

WHERE DO THESE THINGS COME FROM?

Just before falling asleep in the small hours of yesterday morning, this sentence floated into my mind, clear as a phone call: The man who typed Lear

Later in the day I wrote it down and then this emerged:

THE MAN WHO TYPED LEAR

The man who typed Lear
didn't mean Shakespeare.
He was thinking of the private Jet
which he doesn't own yet.
His novel is not ready
his hand it is not steady.
Lear will be the hero's name
and in his search for fame
Lear will lose the plot.
So far, that's all he's got,
the man who typed Lear.
You heard it here.
Posted by Natalie d'Arbeloff at 12:32 am 2 comments:

"THE LESSON" on GNARLED OAK

The Lesson is a video
I made a while ago based on my 1992 construction of the same name.
Gnarled Oak is the excellent online literary journal edited by James Brush.
That those two have connected is my reason for joy today and I raise a glass of orange juice (alcohol being bad for flu) in celebration.

If it's permissible to love some of one's own work (and if it's not permissible I don't care) then I truly love The Lesson and if there was a fire I would probably grab it before jumping out of the window and trust naively that we would both not end up smashed to smithereens.

The subsequent video was fun to make and I'd like to experiment with other versions at some point. But the point is that The Lesson summarises what is essentially my outlook on life: not forgetting to be amazed.

This is not a happy-clappy wishy-washy cliché but solidly based on my own experience. I must define what I mean by amazement, in case I'm misinterpreted as somebody who lavishes the word indiscriminately on anything and everything, in the same way that the words "incredible' or "awesome" are flung about, unstoppable showers of confetti littering the environment.

What I mean is the realisation, sometimes sudden, of the magnificent and also scary un-graspable reality of life, the universe and everything. Yes that is a cliché, but how else to say that often, standing on the corner waiting for a bus, for example, I look at  the pavement beneath my feet and realise - actually real..alise that I'm standing on a sphere spinning around in unimaginably deep dark space and, if that is not enough to be amazed about, this miniscule dot which is "me" is also, in reality, a cluster of unimaginably small whirling atoms which, unimaginably, are also conscious of being "me": this small cluster of DNA, memories, history, ancestors etc. and yes, I'm aware of the theories, spiritual or materialist, about existence or non-existence of the self, the ego, the universe etc. but please, right now, I'm just focusing on the amazement which fills me from head to foot in such moments, and in so very many others, when ordinary life is perceived as absolutely extraordinary and all the explanations, whether from a scientific, spiritual, philosophical or aesthetic perspective are just not enough for me. They're just hay-coloured needles in a multicoloured haystack.

Rolling around in that haystack is what I mean by not forgetting to be amazed. 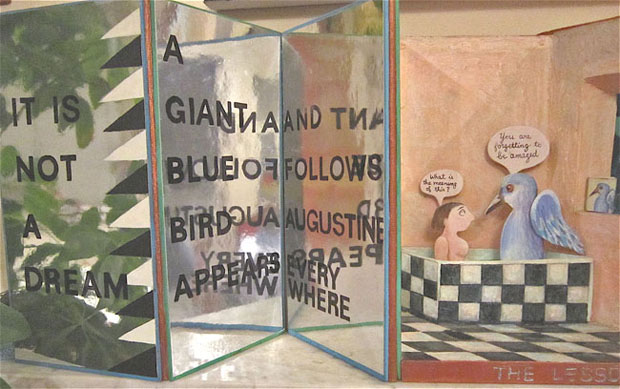 It's been a very slow start to the New Year and now I'm at the tail end of a nasty bout of flu that has knocked the stuffing out of me, left-over stuffing from the too-long holiday period. But never mind, what's more boring than the boring subject of flu etc?

There wasn't anything I wanted to blog about, hence the absence of blog posts. Now I want to get back in here before I'm totally forgotten by the cyber world. Imagine not existing AT ALL on the internet! The horror! A fate worse than real death. I'm joking of course.

Just to fill this blank space I've pulled out from the virtual filing cabinet something to entertain anyone who is still here. The image is new (drawn digitally with the ArtRage software) but the poem is 2007.

Posted by Natalie d'Arbeloff at 1:53 am 9 comments: