NOW FOR SOMETHING DIFFERENT

When things get too familiar, too routine, too repetitious, too obsessive, too frustrating, or too whatever, I like to try something that gives me a kick but doesn't necessarily lead anywhere or mean anything except a momentary YES!

Singing is like that for me - not serious singing, not proper singing, just fun. Songs I love, done my way. Best fun of all is concocting a different musical background for a well-known song (I use Garage Band) and singing over it. I recorded a few of these 'covers' and probably uploaded some in past blog posts but I don't remember when or where.

I must thank Roderick whose recent attempts to post a sound recording of his own voice led to my proposing variously convoluted techy options but the problem was finally solved by commenter MikeM who suggested a very straightforward solution. I've now used picosound myself to post two recordings.....

I've always loved the song Caruso for its beautiful minor chords, its melancholy, but until now I never bothered looking up who wrote it or when. I assumed it was old, traditional, perhaps anonymous, and Neapolitan. Having finally consulted Wikipedia (please do likewise if you don't already know the story) I find that it really was about Caruso but even sadder than I thought.

Here it is on YouTube performed as a duet by Lucio Dalla (the song's composer) and Pavarotti in 1992. Listen to it before reading my rough translation.

The power of words
When every drama is a farce
A bit of makeup and makebelieve
And you can be someone else
But two eyes gazing into yours
So close, so true
Make you forget the words
Confound your thoughts
You become very small
Even your nights in America
You turn around and see your whole life
Disappearing behind the blades of a propeller
Even if life is ending
He’s not thinking too much about it
He’s even feeling quite happy
He launches into his song again

(Refrain)
Posted by Natalie d'Arbeloff at 3:43 am 2 comments:

Late last night, on my way home from a marvellous musical soirée at friends' house, I'm waiting at a bus stop. Two African women next to me are talking with great animation, their voices bubbling, swirling like amplified, orchestrated bird song. I want to speak this language! I turn to the larger, more voluble of the two:

me: where are you from?
she (smiles, gives me a hug, kisses my cheek): Nigeria.
me: which part?
she: Lagos.
me: My friend Teju Cole is from there.
she: Ibo?
me: Yes, Ibo. You?
she: Yoruba.
me: Oh, I think he's Yoruba too.
(Truth is, I can't remember which of the two Teju is).
The bus arrives. The three of us get on and the large woman sits behind me.
she: How old are you?
me: I'm not going to tell you. Guess.
she: Sixty-two.
me: Thank you, I'm flattered (actually I'm ecstatic) but you're wrong.
she: Seventy-one?
me: (smiling enigmatically) Wrong. How old are you?
she: Guess.
me: Thirty-five?
Her round face, firm and polished as a nectarine, breaks into a gleaming smile.
she: I'm fifty-one.

It goes on like this and by the time I get off at my stop, we have been friends forever. We hug, we wave. I love these women. I love London.
Posted by Natalie d'Arbeloff at 2:03 pm 4 comments:

I'm one of the 15 winners of a film poster competition to be displayed on the hoardings of a cinema opening at the beginning of September in the old Pizza Express building in Kentish Town. I've just heard from the organisers that I'm on the winners list.

The brief was to design a poster for one's favourite film of all time. So I chose Bicycle Thieves because its brilliance is timeless and because my dear departed brother-in-law Gerardo Guerrieri worked on the memorable script. Below is my poster design and yes, I did borrow from that famous photo. Will post more when all the posters are up on the hoardings. 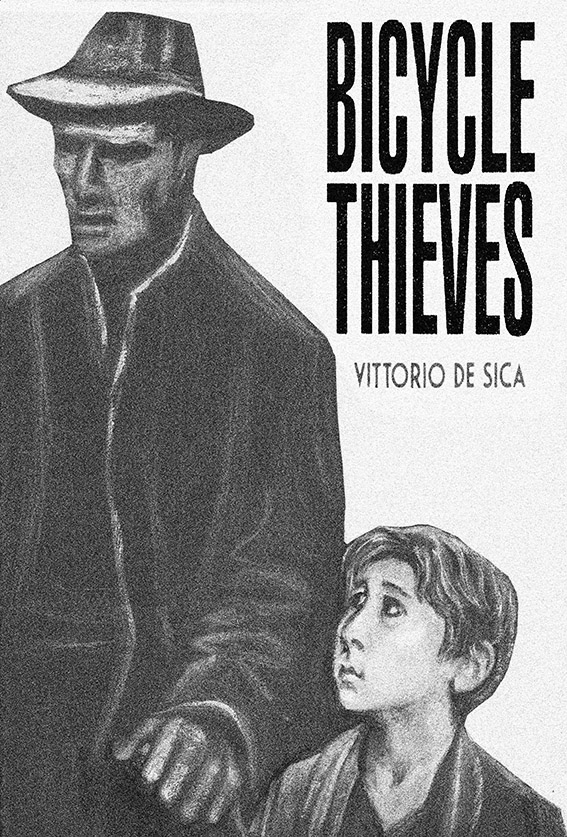 Done it. Registered to vote in the Labour leadership election. Paid the outrageous £25 fee.

And in other news:

I've just finished the first in my new series of Pableaux (poem-tableaux) - not exactly a poem but kind of poetic?

Title: How could she know. Dimensions: W 31.5 cms X H 31 cms X D 4.5 cms. Media: wood, balsa, canvas, acrylic. It's a box inside which the cut-out shapes are arranged on different levels.

I couldn't get the photo to show its 3-dimensionality or the thin gold edges around the frame. 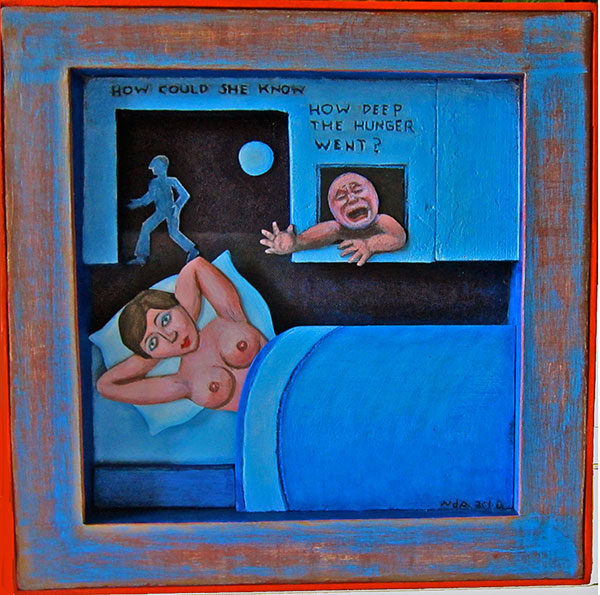 Parabems Portugal, muito bem! I love Portugal and they deserved to win the World Cup. I love my birthplace too but France lost, that's how it goes.

On Saturday night, more excellence:  I was privileged to be at an extraordinary evening of spellbinding performances from Mikey Kirkpatrick (Bird Radio) and John Bently (Bones and the Aft) - thank you all. I was blown away, gut-wrenched.

Some of Bird Radio and Bones & the Aft gigs are on YouTube but there's absolutely no substitute for seeing and hearing them live, right up close in an intimate setting. Mikey and John have strongly individual musical and poetic styles but both have similar roots and a passionate engagement with place and time, everyday tragedies and wonders. An image comes to mind of medieval troubadours but with very modern, very original sound and fury. See the Facebook page of Bird Radio for news of their CDs. John Bently is also a fellow book-artist (see Liver and Lights website) and his brilliant handmade books are collected world-wide - buy them now while there are still some left!


I took some photos at the gig on Saturday and attach a few below. Lights were dim in the room and I had to fiddle with Photoshop to extract anything at all from the pictures but I'm quite pleased with the somewhat impressionist effect that unexpectedly emerged. Unfortunately my camera's battery died just as Bones and the Aft's set was getting under way so I missed what would have been some memorable shots. 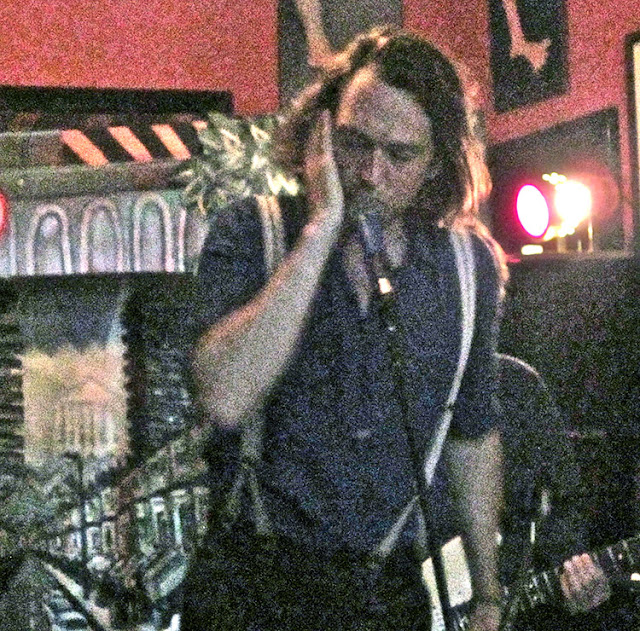 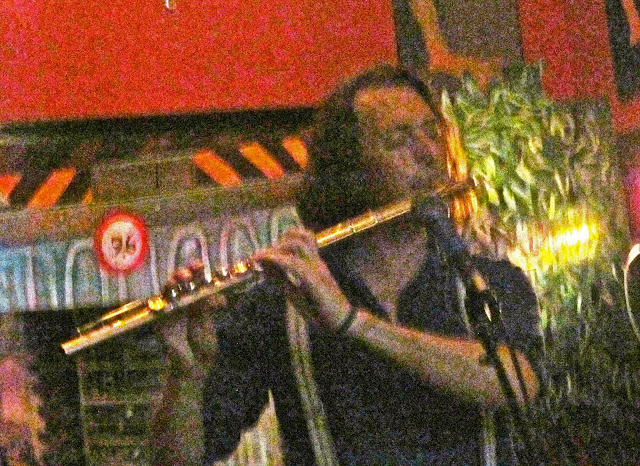 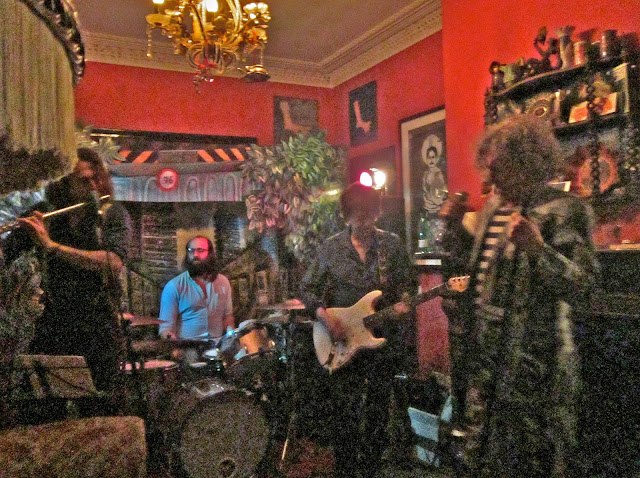 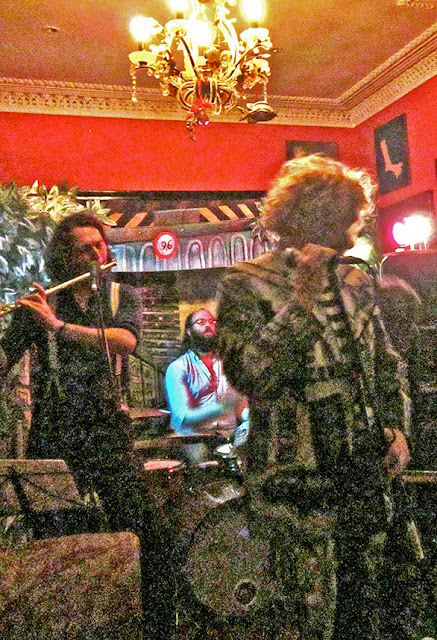 This just popped into my head and onto paper without premeditation. 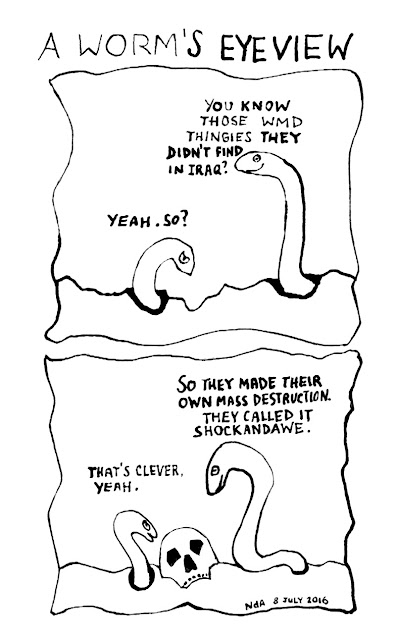 Posted by Natalie d'Arbeloff at 5:27 am No comments:

Yes it's good that it's down on paper now,  2.6 million words of it, costing ten million pounds. Ten. Million. Pounds. And seven years. All neat and official now: the Iraq war should not have happened.

Millions of us told you so. We marched all over the planet to tell you so but that didn't count because they knew best, George and Tony and their mates knew best. They said it was The Right Thing To Do and that God was on their side.

Now 2.6 million words confirm that, actually, we knew best and they, Tony and George & Co. were wrong. It was a mistake. But that's okay because Tony has apologised. He said:  " I express more sorrow regret and apology than you can ever believe."  That's life. Stuff happens. We should lighten up, eh?

Around two million Iraqui civilians lost their lives, limbs, country and futures.Thousands of American and hundreds of British army personnel died and were maimed or permanently traumatised for nothing,  for a 'mistake'. Saddam was toppled but there are now 100 Saddams, if not more. The rise and rise of Isis and terrorism can, without exaggeration, be traced back to that mistaken war.

But hey, the Chilcot report is out and it explains everything and it says Tony and Co. were naughty, and lessons must be learned for the future - what more do you want?

Here's what I want:

I want Tony Blair to get down on his knees.
I want him to beg...BEG...forgiveness from the families he has bereaved (all of them, including Iraquis).
I want Blair to donate all the money he's been paid for his speaking tours after the Iraq war to all the broken lives, the refugees, the devastated homes which he and Bush are directly responsible for.
I don't want him to be sent to prison for war crimes:
I want him to be sent to Iraq, to live there for at least seven years. in the same conditions as the ordinary people now struggle to live.
I want the ten million pounds which was paid to the Chilcot report to be refunded and then donated to the care of the injured soldiers who returned from that war.

I'm being emotional, naive, unrealistic. Emotion shouldn't affect one's judgement, right?
Well, unless compassion and empathy enter politics and into decisons which will affect millions of people for generations to come, there's no hope for us humans.

Deeply regret not having been on the huge pro-Europe march in London today. I intended to go but didn't feel well this morning so stayed home but have kept up with it via videos and photos taken by people who were there. Never mind the politics, feel the humanity!

I'm proud and grateful to live in London where such spontaneous, high-spirited, good-hearted displays of human solidarity are possible and attract so many people. It restores and bolsters one's faith in goodness...yes, that discredited word (and quality) labelled "naivety" etc. by cynics and arrogant pundits. This march, as I see it, was less about politics than it was about a sense of belonging together in a world where hate, racism, prejudice, fanaticism, inequality and all their ramifications are, by common agreement, thrown into the dustbin of history. That world doesn't exist yet, but there's hope for it and demonstrations like this prove it. 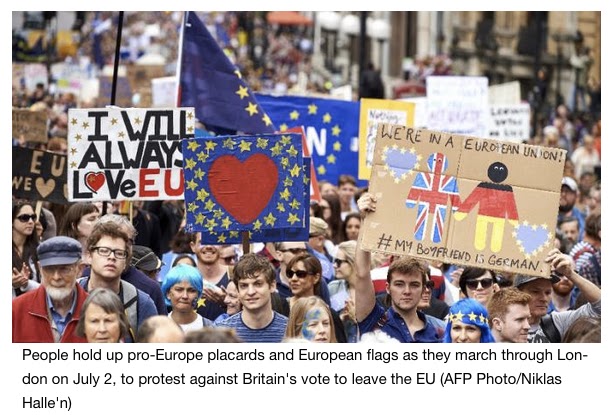 You couldn't make this up.

John Le Carré where are you? Here's your next book, almost ready-made.
Posted by Natalie d'Arbeloff at 12:01 pm 5 comments: