A much better version of the pompous circumstance hypnotising much of London today.

MORE
Posted by Natalie d'Arbeloff at 3:16 pm No comments:

It was yesterday and I almost forgot to congratulate myself:

8 YEARS OF BLAUGUSTINE!
In blog-time that's either 8 minutes or 80 years. Anyway, bravo Blaugustine but I wish I was a more faithful and frequent blogger. I'm very bad at time-keeping, consistency and continuity and if anybody's got a recipe for improving that situation, can you please let me have it right now?
Must do something to mark this day so I'm going to pick one image from each year of the Blaug. Click on the images to go to that year in the archives.

Posted by Natalie d'Arbeloff at 1:34 am No comments:

MIRACLE AT THE OLD STILE PRESS

Last Easter I posted here a few of the ink drawings I had done many years ago on the life of Jesus and lo, Nicolas McDowall saw them, declared them to be good and decided to publish the whole suite as a book.

And behold, with perfect timing, the latest Old Stile Press publication Scenes from the Life of Jesus is ready and glowing: my ancient drawings resurrected in a stunningly designed and hand-printed by Nicolas book. The intense blue-black lines inhabit the pristine white space of the paper as if they were born there while the minimal text in pale grey and blue Aries type acts as a whispered accompaniment. You can read all about it on the Old Stile Press blog and the book's pages and close-ups are in a slide-show at the main website of the Press, linked above. Concerning the subject, this is what I wrote as the foreword to the book: 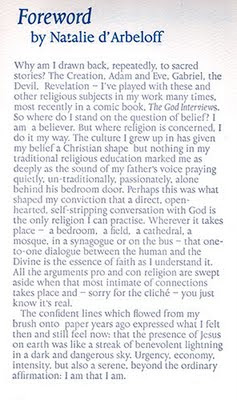 I went to Wales this week to sign the 60 copies of the book and stayed overnight at Frances and Nicolas McDowall's marvellous home, a place so magical that even if it was not also the site of their Old Stile Press, it would be stored in my memory as one of the most inspiring places I have ever been privileged to visit. The inside of the house blends seamlessly with the outside and in both, every corner yields a discovery, a lovingly tended treasure. The McDowalls have an extraordinary art collection, mainly of neo-romantic English art, but also some idiosyncratic pieces dotted around the grounds, such as the slabs of slate engraved with Pilgrims of Solitude a poem by Cecil Collins. The sculpture framed by the living room window is by Michael Ayrton. 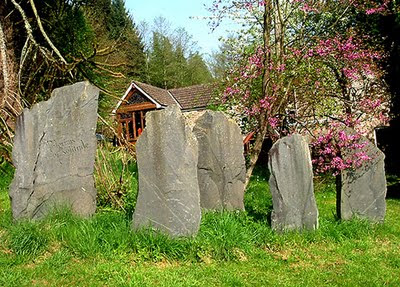 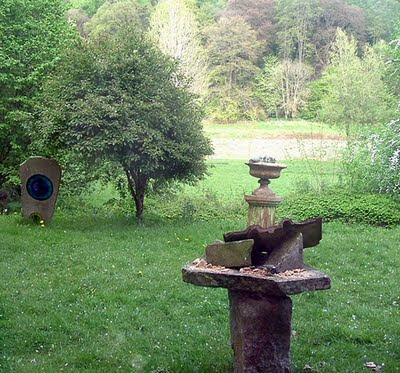 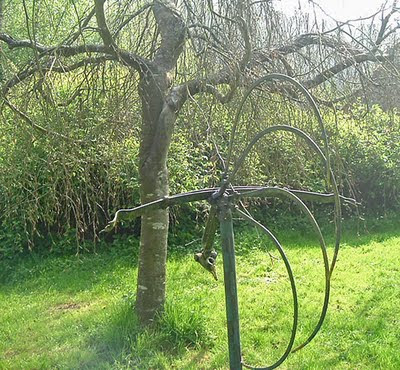 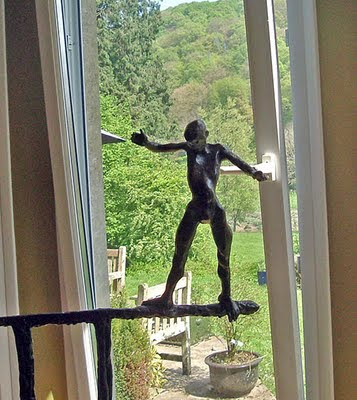 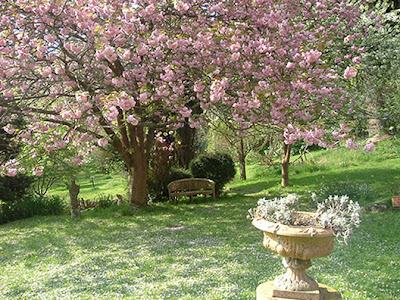 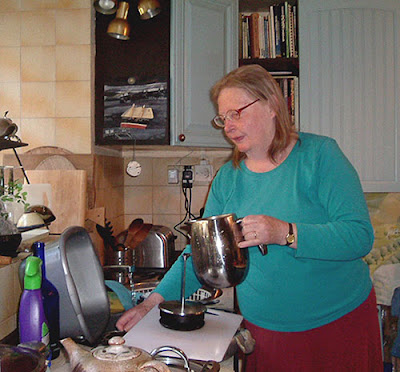 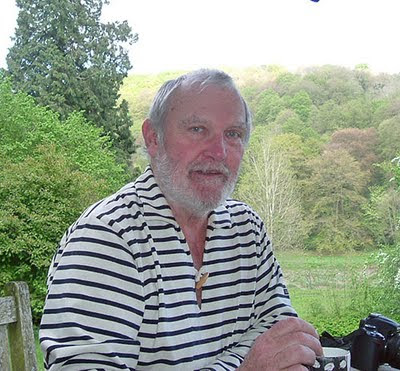 However you celebrate this resurgence of Spring, have a beautiful weekend.
MORE

Posted by Natalie d'Arbeloff at 8:25 pm No comments:

ONE THING LEADS TO ANOTHER THING

Recent mention by Marja-Leena and Cassandra Pages and Tasting Rhubarb of La Vie en Rosé   led to a very welcome upsurge in my stats which, like every other blogger in blogdom, I obsessively check now and then - oh allright, very frequently - to see whether I am loved more than I am ignored. Come to think of it, that's a life-long preoccupation.

Anyway, Dorothee Lang who, amongst many other things, is editor of the Blueprint Review noted Jean's mention of the Augustine comic strips and invited me to join mycomics.de   an online community of comics creators. Of course I was happy to do so and, thanks to Dorothee's help, my complete INERTIA strip is now uploaded there.The site is mainly in German but comics from other countries also appear and international participation is encouraged. Gradually I will be posting more strips to this friendly and well-designed site.

Yesterday was the christening of Lewis - my niece Sarah and her husband Elliott's second baby - and the occasion was blessed by fabulous Spring weather and perfect location: an English village's 13th Century church with great pub across the road where we all gathered for lunch after a cheerful Anglican service during which the round infant, dressed in pinstriped mini-waistcoat, white shirt, green socks and black corduroy trousers, seemed puzzled but smiled graciously.

When the guests were eating lunch at long wooden tables in the pub garden, I remembered part of a dream I had about a week or so ago in which the same image appeared. I've been thinking about so-called pre-cognitive dreams, which I have fairly often. The pre-cognitive bit is usually quite banal, just ordinary scenes from ordinary life which I see in a dream and then, a variable time later, encounter in waking life. I'm aware of the theories, debates, experiments etc. on this subject but I want to follow my own ruminations about it and see where they lead.

I'm starting from the premise that some dreams can foresee events/scenes which have not yet taken place in 'real time': how would this process work? My intuition says that there's nothing supernatural about it but that it's an actual process happening constantly although we are rarely aware of it. Here's the gist of notes I was writing while having breakfast this morning:

Suppose the events of our day are like the successive frames in a film - say, 24 frames per second or some other fps - but we don't see separate frames, only one continuous strip. Suppose something different happens when we're asleep and dreaming: the film speeds up and the gaps between frames narrows, they become somewhat compressed. But our perception remains the same as it was when awake so we're actually seeing some of the next frames because they overlap. So maybe what seems like foreseeing a future event is simply looking at the present that we haven't caught up with yet in 'real time' because 'dream-time' goes faster.

Yes, I know there are all sorts of  problems with this conjecture but it's only a start. I will expand it with some animation/video experiments when I've worked out how to do it. These are the kinds of questions that really excite me and it doesn't bother me that I'm not qualified to explore them - no degrees in physics, neurology, psychology, biology, you-name-it-ology. So? Who's gonna stop me?

MORE
Posted by Natalie d'Arbeloff at 9:53 pm No comments:

It's many years since I first encountered C.G. Jung's autobiography Memories, Dreams, Reflections. At the time, in my habitually over-eager way of demonstrating camaraderie with certain thinkers, I emphatically underlined many passages in this book. I have been re-reading it now and am amused to find that those passages are exactly the ones that I would underline now if I hadn't already done so.

Here is Dr. Jung, after his trip to India, reflecting on the differences between his outlook and the Indian form of spirituality:

I, on the other hand, wish to persist in the state of lively contemplation of nature and of the psychic images. I do not want to be freed from human beings, nor from myself, nor from nature; for all these appear to me the greatest of miracles. Nature, the psyche, and life appear to me like divinity unfolded - and what more could I wish for?To me the supreme meaning of Being can consist only in the fact that it is , not that it is not or is no longer.

To me there is no liberation à tout prix. I cannot be liberated from anything that I do not possess, have not done, or experienced. Real liberation becomes possible for me only when I have done all that I was able to do, when I have completely devoted myself to a thing and participated in it to the utmost.


A new illustration has been added to EPISODE FIFTEEN of La Vie en Rosé. Go there to see it full size.

MORE
Posted by Natalie d'Arbeloff at 9:23 pm No comments:

Illustrations, however, are still in the making and will be uploaded when ready. I was waiting until I'd finished the last two before posting the text  but now I think it's better to keep the story flowing and I can always add images later

MORE
Posted by Natalie d'Arbeloff at 2:24 am No comments: