Thanks to my niece Selene Guerrieri for the preview of the celebrations which will be held in Matera, Italy on the 4th of February, birthday of my late brother-in-law Gerardo Guerrieri who was Selene's and her sister Indira's father and my sister Anne d'Arbeloff's husband.

Below is the first edition of Selene's book on Gerardo with my portrait of him (painted in 1958) on the cover. The second, expanded, edition is titled Un palcoscenico pieno di sogni (A Stage full of Dreams). 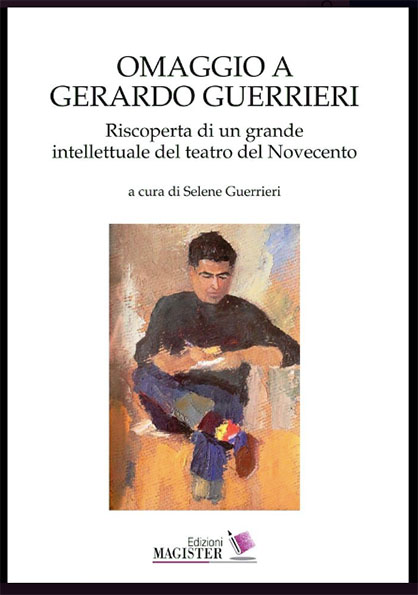 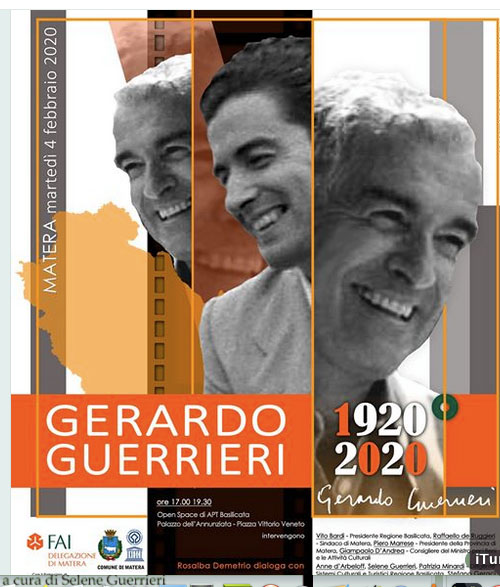 Posted by Natalie d'Arbeloff at 1:42 pm No comments:

CAN YOU BECOME ECCENTRIC OR ARE YOU BORN THAT WAY?

Waiting to have my lowlights done in a local hairdresser I saw this photo of the Japanese artist Yayoi Kusama in a magazine and thought: why can't I be more eccentric?

People who look and act eccentric are often famous and wealthy. Apart from our age, Yayoi and I have very little in common but I surreptitiously tore that page from the magazine and when I got home, fooled around in Photoshop to see if eccentricity becomes me.

Obviously not, unless I could be Harpo Marx. Posted by Natalie d'Arbeloff at 8:36 pm No comments:

I AM AMONG TREASURES

Heart and ego-warming news just received. This is from the fabulous British Library and if you're in London why not go and see their treasures among which are some of my own humble (not really humble) works.
The one mentioned below is 'For A Song' an artist's book I made in 1980 in the throes of deep emotional experience. Seven poems and seven etchings in a hand-bound book, limited edition of 15 copies. Full details here:


"This month saw an upgrade and refresh to some of the displays in the British Library Treasures Gallery. These changes include a completely new case exhibiting Contemporary Artists’ Books. I am delighted to inform you your work For a Song, (1980) RF.2017.a.10 has been included in this case and is currently on display. The case is part of a larger exhibition sub-section exploring the “Art of the Book”.

As you will know the Treasures Gallery exhibits some of the world’s most exciting, beautiful and significant books, manuscripts and sound recordings. It also the principle way many of the Library’s thousands of visitors annually will experience the Library Collections." 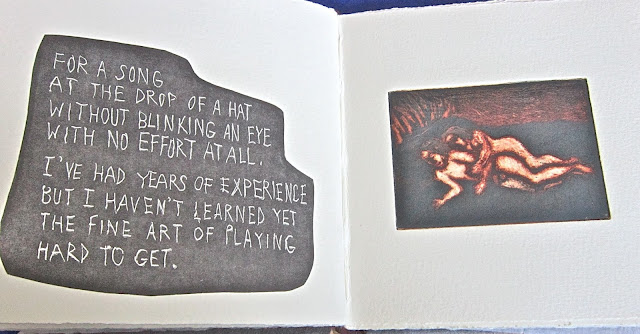 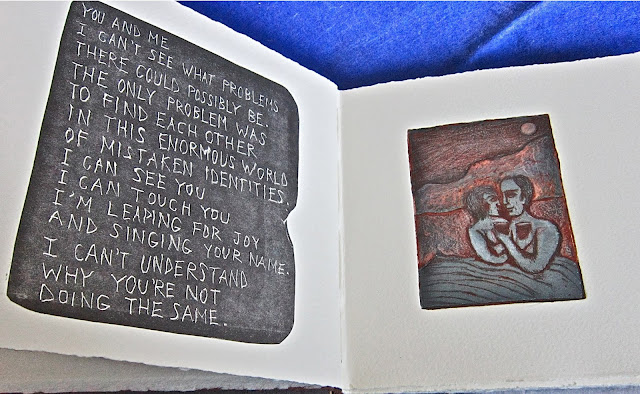 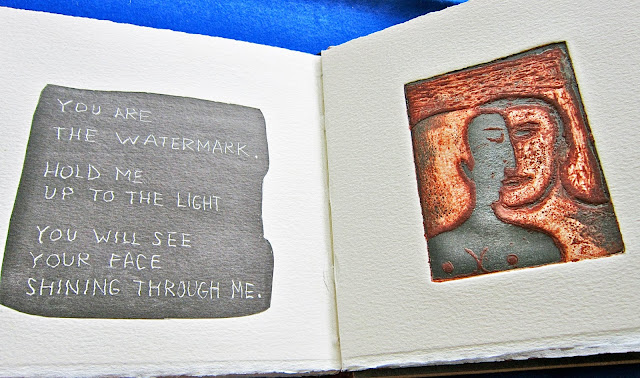 I don't entirely share the perspective of the writer of this article, especially concerning the 'suffocating atmosphere' prevalent at the time, but she does admit that's how it seems viewed from her generation's angle.

Whether the current BBC series The Trial of Christine Keeler is the 'real' story of Christine and the Profumo Affair is open to interpretation but at least it's a brave attempt to give a more authentic picture of Christine than the cruel, damaging and false tabloid version of her as prostitute/slag/scarlet woman etc.


I arrived in London in winter 1963 so I was around when newspaper headlines, tv news and gossip-mongers were salivating, fabricating and raging about the Scandal. But the people I hung out with were artists, students, teachers, would-be actors, would-be-anything, foreigners and Anglos of various backgrounds and politics (mostly left-wing), employed and unemployed. None of us were among the accusers of Christine or Mandy and there was also sympathy for Stephen Ward. We were anti-war, anti-racism, anti-establishment (the Hornsey Art College student revolution happened around that time) pro equality and so on. Yes there was patriarchy but mostly we had fun with the patriarchs. I can only speak about my own experience but it was one of the most fun periods of my life, the down bits as exciting as the ups. The 'suffocating atmosphere' didn't happen to me, but maybe i was lucky.
Posted by Natalie d'Arbeloff at 9:40 pm No comments:

10 hrs ·
DEAR CHRISTINE: EXHIBITION & CATALOGUE
Here is a contribution by Natalie d'Arbeloff to this group show at ARTHOUSE1, London, looking afresh at Christine Keeler. Natalie writes in the catalogue: "I felt that the whole scandal was yet another historical example of how power corrupts and how corruption is always linked to power. The full truth about all the individuals, public and private, who were involved in the Profumo Affair will probably never be known but Christine Keeler was, in that story, simultaneously absolutely powerless and absolutely powerful. She was neither victim nor hero and could not protect herself from the manipulations of powerful men. On the other hand, the irresistible power of her beauty and of her unashamed sexuality turned the game around, making her the one who held the cards and held captive the men, the media and the public. This ambiguity, cruel as it is, is what I have tried to express in my two works for this exhibition." The exhibition comprises of paintings, ceramics, sculpture, music, film, photography, poetry, performance and artist talks at Arthouse1, 45 Grange Rd, London SE1 3BH
Private View: 1st February 6.30pm - 9pm
Symposium: 22nd February 11am - 7pm
Open to public: 2 - 29th February 2020
https://www.arthouse1.co.uk/dear-christine-v2.html

Can't pay attention to blogs, socialising via media or disastrous world events at the moment. Worried and concerned about a close friend who is ill.


Dfficult but useful day. Useful is often the best one can be innit? Small down to earth actions are better than words because words can be the worst trouble makers. I'm congratulating myself for a day of usefulness.
The hands position in the photo is the well-known trick for disguising jowls. 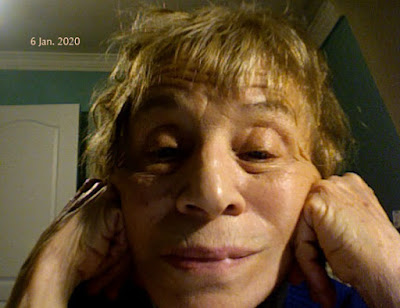 Here, as my gift to you at the end of the first day of 2020, are two stupid things to worry about as a distraction from all the intelligent things you personally and all of us collectively truly need to worry about.

1. Tiny little black flies, no bigger than the tiniest dot in the smallest dot com. That's how small they are. Almost invisible, silent, there and not there in the same moment, always alone. What do they want from you? Who are they? Where do they live? What do they eat? Do they eat? You're clean, you don't smell bad, you don't have rotting food lying around or other stuff flies might be interested in. Are they even flies? WTF?


2. Why is your excellent advice ignored by those who need it most? Your unquestionable wisdom, distilled from a lifetime of experience and insight could be like nectar is to a bee or like the letter B is to C, fitting perfectly in a logical sequence recognised by the whole world as an alphabet. So why is it ignored?

Now please worry about these two issues for a few hours, or even minutes. Then move on. Have a happy January etc. 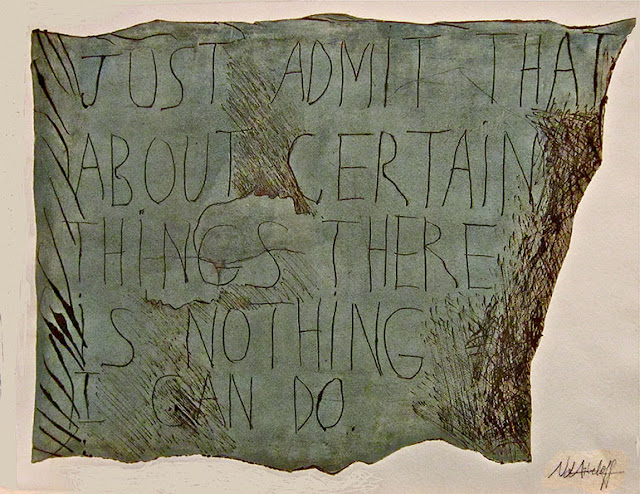