THE BELLS WERE RINGING

At precisely 8:12 yesterday morning I was on the street where I live, ringing a bell. I only got this bell last week and would have settled for anything but bells are surprisingly hard to find. I had almost given up when, in a charity shop, I chanced upon the unusual leaf-bedecked glass object you see below. 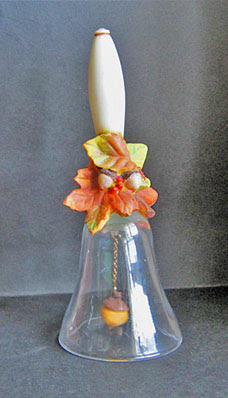 I was part of a small crowd gathered at the junction of two roads, all swinging and happily banging their own bell-like things.
I hope people don't mind my posting photos of them; everyone was snapping so I guess it's okay. 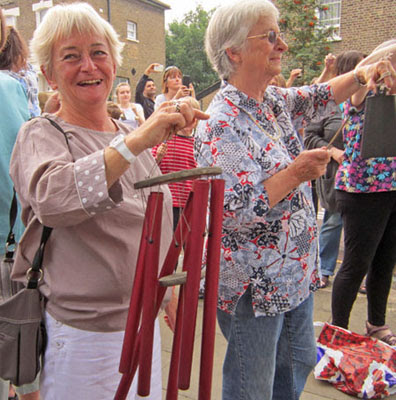 Encouraging the performance was Sandy Nairne, Director of the National Portrait Gallery. He lives in the neighbourhood and was the one who exhorted us all to play our part in Martin Creed's Work No. 1197   welcoming the Olympics to London. Here he is holding up a radio so we can hear Big Ben joining the nation-wide artistic cacophony for three whole minutes.

It was a wonderfully simple and effective community-enhancing moment. 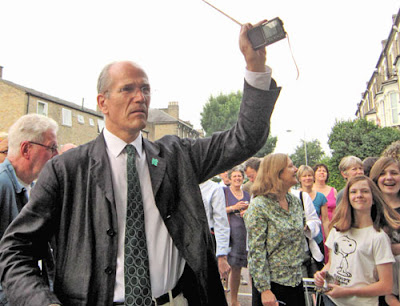 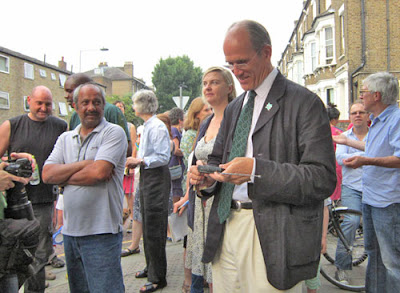 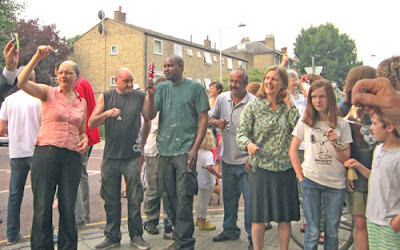 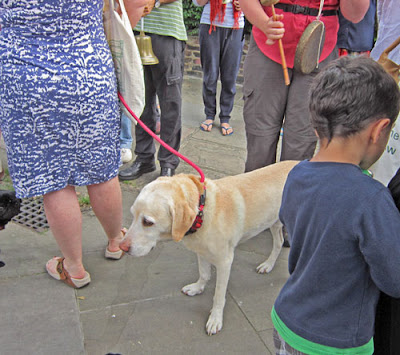 This spectator was wondering about the meaning of life, noise and everything.

NEW PAGES for MY LIFE UNFOLDS

I've gathered together, starting here all the photos of images from the accordion book and notes about the process, making it much easier to see as a whole. Amazing how much time such cyber house-cleaning takes - much longer than pushing the vacuum cleaner around.


It would be nice if you'd tell me whether you think it was worth the effort?

Sometimes I wonder if I am a serious artist or even a serious person.

On Saturday I went to see the Munch exhibition at Tate Modern and I was thinking about it as I walked back to London Bridge underground station along the embankment. It was another of these cloudy windy any-minute-it-will-rain days but quite mild and my raincoat was too much. I had spent a long time in the exhibition and even longer in the bookshop and now I was tired and wanted to get home.

I entered Borough Market, that enticing assemblage of sights, smells and sounds, and slowly made my way around crowded stalls offering an infinite variety of cheeses, wines, spices, pastries, pies, cakes, pasta, roasted meats, exotic cooked dishes from around the world - I wanted to taste and buy all of them but couldn't  choose so I followed the sound of music coming from the central piazza.

Bingo! All tiredness, ruminations on art, Munch and all the rest of them evaporated as I surrendered mind, body and soul to the rhythm of J'Attendrai  played in the style of the Hot Club de France by a great band celebrating Le Quatorze Juillet. Leaning against a conveniently parked car, I let my feet pound the beat while I switched my camera to movie mode and pointed it. Gradually a few people moved into the centre and started to dance and I kept filming but didn't notice that my battery had run out so this movie fragment is the only bit that was recorded: two guys too drunk on love and booze to be graceful but certainly having a ball.

Later a young man dressed as a French waiter pulled me onto the floor and I danced my socks off. The crowd applauded - no doubt because an Oldie dancing like that is an oddity. Several mobile phones were filming the incident - I hope none of them were bloggers. But a Japanese tourist asked me if I was a professional dancer so I was flattered and considered joining the band to sing my Piaf numbers. Fortunately the band took a break at that moment and I decided it was time to go.

Back home in high spirits, whatever serious thoughts I may have had earlier about tragic, talented, tortured Munch were gone with the wind and I'm not in the mood to try and recapture them. If you can't see the exhibition itself, get hold of this terrific film by Peter Watkins, a docudrama in which much of the narration is from Munch's own diaries. I bought the DVD in the Tate Modern bookshop.

MORE
Posted by Natalie d'Arbeloff at 4:57 am No comments:

I've done quite a few accordion-folded books in the past and decided to post some of them here, perhaps as slide-shows. Here's one called Therefore I Am , black ink in a blank Chinese sketchbook similar to those which feature in the Open Books Exhibition. This one is 7 x 4.5 inches, drawn horizontally on one side of the twenty-three folds. I started it at least twenty years ago but finished it only last January.

My idea was to represent two different ways of thinking: rightbrain/leftbrain/yin/yang/male/female/etc. tumbling down the length of the book in parallel but different styles and ending up together at the bottom. I did the slideshow and soundtrack today but it's only a rough experiment so excuse my poor elocution. It's at this link and also on MORE .

Posted by Natalie d'Arbeloff at 2:23 am 2 comments:

The journey from London via Birmingham takes four hours and forty-two minutes and surprisingly, considering the recent appalling weather and railway woes in general, the train arrived in Aberystwyth precisely on time.

A short taxi ride to the seafront plunged me instantly into the ambiance of an earlier century which I could feel but not describe, embedded in the colours of sea, sky, slate, iron and the uniquely luminous green green grass of Wales. 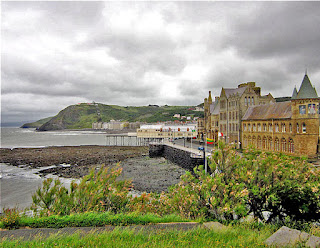 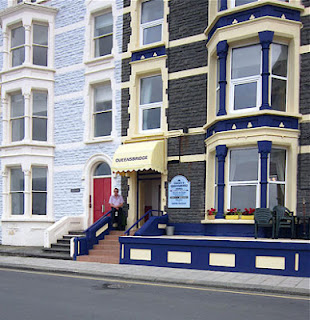 My bed and breakfast was situated at the far end of the windswept, mostly deserted promenade facing the black sand beach and fiercely foaming sea.

Mary Husted and her husband Andrew Vincent were staying in a hotel nearby and we went for a very tasty dinner at a Spanish delicatessen-restaurant which they had discovered. Walking back afterwards we were treated to a spectacular sunset, unlike any I've ever seen. Unfortunately I didn't think of turning on the movie option in my camera and missed recording the iridescent splashes of blue gradually morphing into geometric patterns and perfectly horizontal golden lines. 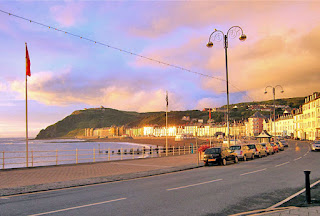 The opening of the exhibition was the next afternoon. It's a long walk uphill so I went with Mary and Andrew in their car and had my first sight of the National Library of Wales which occupies a stunning position high above the town. 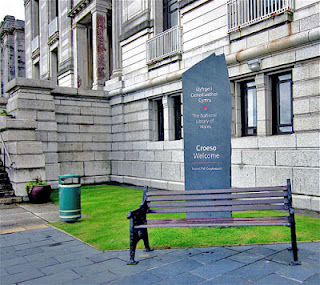 In contrast to its forbidding institutional exterior, the Library's interior is warm and welcoming, full of history and surprises. At the top of a grand staircase is the entrance to Open Books. You are greeted by three very different works cascading vertically from the top of a tall glass case: Frank Vigneron's Le Songe Creux 274 , GW Bot's Australglyph Book: Night and Day and David Gould's Exquisite Corpses. I'm not going to attempt a review of this excellent exhibition but it deserves, and I hope will get, the attention of the best critical minds/eyes wherever they may be, in the art world and beyond.

All the works and details about the artists are in the catalogue, the whole of which is viewable online. 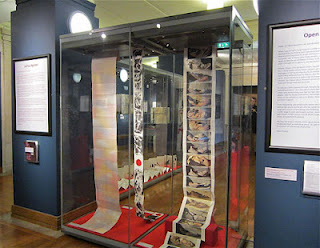 A big disappointment for me was that Clive Hicks-Jenkins couldn't be at the opening and was away the whole weekend. I was so looking forward to a real-life encounter with the man behind the fabulous ArtLog and to seeing his work which I greatly admire. We have never met but know of each other via our websites and through mutual friends Frances and Nicolas McDowall with whose Old Stile Press we have both published books. It was Clive who introduced me via the internet to Mary Husted and my presence in this exhibition is thanks to him, to Mary and, needless to say but I'll say it, to my own...ahem...undeniable talent.

The front of My Life stands unfolded on a red plinth inside a four-tiered case. Floating on a glass shelf above is Ou Da Wei's Mountainous Leisure while Alan Salisbury's trompe l'oeil Pears on a Table recline below and at ground levelTULU Girls by Sue Williams cavort in a circle: three strongly individualistic works whose company I am very happy to be in. 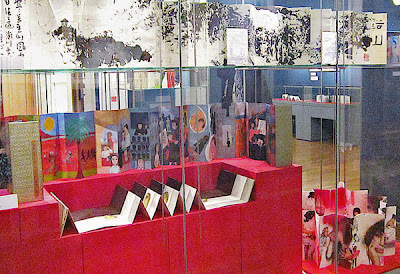 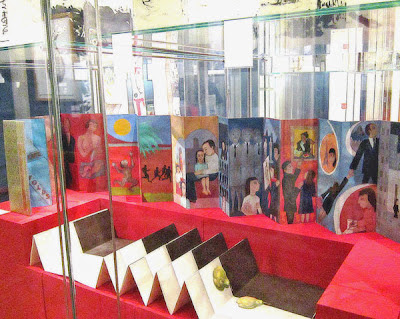 On the other side of the case, the reverse of My Life is fully unfolded: the red of the plinth serendipitously matches the reds in my images. Above is Maggie James' Peripheral Spaces, another work I'm glad to be close to. 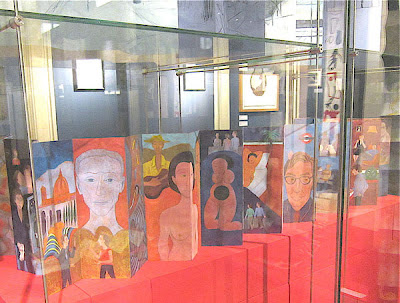 Clive Hicks-Jenkins' bold and inventive Alphabet Primer draws you into its folkloric universe. 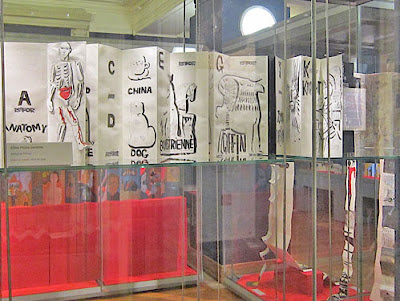 Mary Husted's Episodes are glimpses into a rich inner landscape, giving you just enough information to dream your own story. 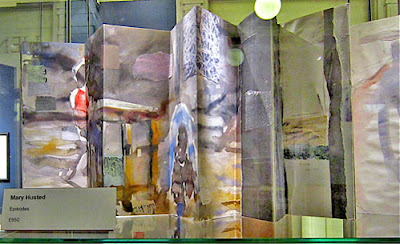 After the introductory speches, we gathered for drinks in a conference room. Mary Husted is in the centre with Jaimie Thomas (in red cardigan) the Library's Exhibitions Officer. Behind them in profile is Mary's husband Andrew. There will be official pictures of the exhibition, no doubt better than mine, and those of us who were present at the opening were photographed as a group - I'll post them when available. 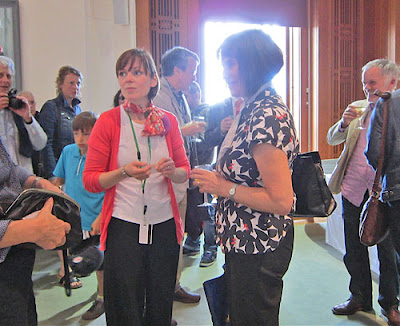 Artists' books are notoriously tricky to exhibit. Ideally they should be shown as sculpture - upright and free of enclosure in an invigilated gallery. But this is generally a practical impossibility and curators have a very difficult task trying to achieve maximum exposure for each unorthodox object within given constraints of space, lighting and available glass cases. In a group show such as this one, with quite a large number of concertina books, Mary Husted has done and is doing a wonderfully enthusiastic, committed and caring curatorial job and I trust she will succeed in her aim to tour this terrific exhibition far and wide.
Meanwhile it is beautifully at home within the magnificent National Library of Wales and you have until September 22nd to walk, run, ride or fly to see it.

Below are some more reasons why I was very glad to visit Aberystwyth. 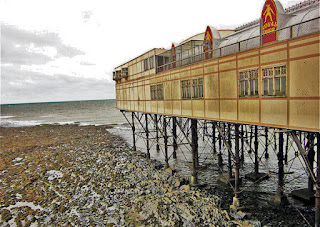 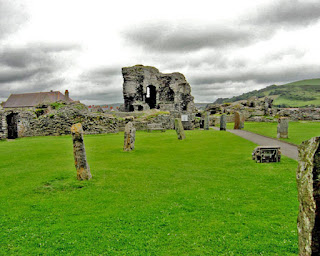 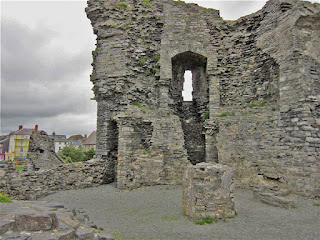 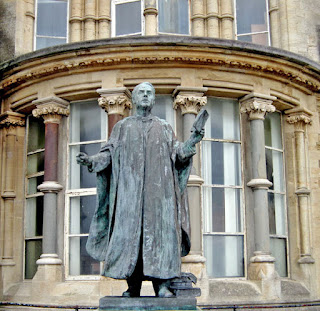 I don't know this stone-caped gentleman's name but he was obviously a distinguished professor since he is immortalised in front of the Old College on the seafront. What do you think the book is that's he's holding?

In my hotel room, before going to the station to catch my train back to London. 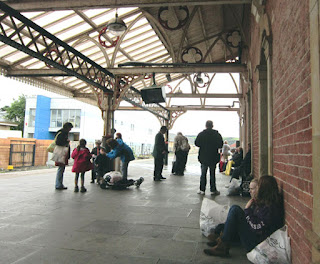 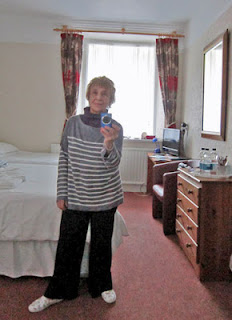 I'll also be posting a movie as soon as I've edited it.