A LOST DAY, A NEW PROJECT, AND THE PHYSIOLOGY OF ANGELS

Have you ever lost a day? I don't mean wasted it but entirely misplaced it? Well, that's what I did, last week. Entirely convinced that it was Wednesday I was blithely into normal Wednesday rhythm until around 4 pm when the phone rang and a voice from the dentist's practice in Salisbury said that I had an appointment at 2:15 pm. "Yes, I know," I said blithely, "It's for tomorrow, Thursday." The voice went quiet and several degrees colder. "Today is Thursday," it said. Astonishment, abject apology and embarassment rushed in, transforming innocent Wednesday into guilty Thursday. And what's more I lost my pre-booked train ticket, no refund allowed. My excuse is that I didn't go out on Monday or Tuesday so I couldn't tell what day it was because I am so concentrated on the new project I'm working on.

The new project is Unfolded Books, a forthcoming exhibition to open in June at the National Library of Wales and possibly to tour elsewhere after it ends in September. It is being organised by artist and curator Mary Husted, a friend of Clive Hicks-Jenkins who is one of the artists invited to participate in this project and it is through his very kindly introducing her to my work that I am included. There are eight artists from Wales, three from Hong Kong, two from Australia and one from England (me). All, with the exception of myself, are personally known to Mary but we are meeting next month to remedy this. Each artist has received one or two of the concertina/accordion books which Mary bought in Hong Kong for this purpose and each is free to fill it however she/he chooses.

My book arrived last week. Below is a photo of it - a tall narrow 33cm x 11.7cm when closed. It's over 2metres long when fully unfolded and I am going to fill both sides of the accordion - that's 52 panels. I've decided on a theme and a technique but both shall remain secret until finished. The deadline is end of May - that's almost tomorrow and I have a huge amount of work to do.

What of the physiology of angels? Probably nothing to do with the above. It came from a dream I had on Wednesday, 8th February (famously not Thursday). It was a long and intricate dream but the relevant bit is that a girl who had contacted me on the internet asked me to come over and advise her on a book she was making. So I went to her house, carrying my breakfast, and sat at her table eating it while she chatted to me about herself. She seemed bored and in a hurry and I wasn't very interested in her but to be polite, I said: what do you really want to do? Her answer amazed me. She said: I want to research the physiology of angels. I replied that there is a team of scientists in outer space who are studying the particles we are made of. 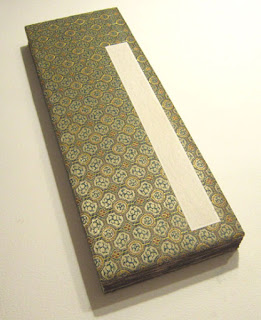 MORE
Posted by Natalie d'Arbeloff at 7:16 pm No comments:

THE STRANGE BEAUTY OF SNOWLIGHT

Out of my window at dusk on Sunday. 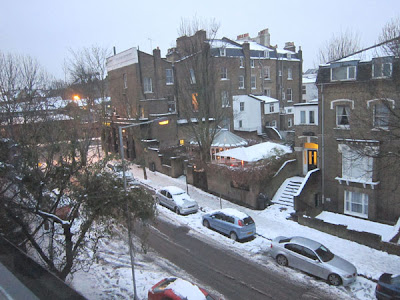 Part of my 2006 series of digitally painted self-portraits  "in-the-manner-of" are included in the latest issue of qarrtsiluni whose current theme is Imitation. I'm so happy to appear again in this consistently, persistently, stubbornly excellent online magazine.

Speaking of digital painting (Hi Hockney! I don't have an iPad but my Wacom graphic tablet has been in constant use since 2004) I love it, it's fun, absorbing, exciting and stimulating to my eye and hand and brain but something entirely different takes place during a direct interaction of the hand and the whole mind-body with a live, un-mediated surface in a live un-mediated environment. I can't define what that difference is and I can't be entirely certain that it's better than its digitally orchestrated version, but somebody sometime somewhere will surely write a thesis on this subject.

MORE
Posted by Natalie d'Arbeloff at 2:52 pm No comments: