GOD vs MAMMON: the fight continues

I don't mention politics very often in this space but that isn't because I'm indifferent to the world outside my imitation ivory miniature tower. I am aware and I do care, a lot. But the feelings I have about the injustice, horror, hypocrisy, deceit, greed, selfishness, violence, insanity and stupidity of so much that the words 'politics' and 'economics' embrace are mainly inarticulate anger and outrage. All I can do is splutter incoherently or cry helplessly so I prefer to leave it up to more eloquent and knowledgeable others to write or speak about such things.

But what's happening right here in London in front of St.Paul's Cathedral, as part of the current global protests about Mammon's domination of almost anything you can think of, has made me want to say my little say.

Whether or not you believe there is a God or a Mammon is irrelevant. For sure all the people camped on the steps of St. Paul's are not believers. But they are certainly convinced that they belong to a movement which is opposed to a dictatorship: the powerful dictatorship of money, and those who control it, over the lives of every person on this planet.

Today's Independent front page has the headline: God vs Mammon: Britain takes sides. Interestingly, the debate is now questioning what the church's role is, what being a Christian means and whether the clergy, especially those in high-ranking positions, should take a strong stand (against Mammon) or sit back and say nothing out of fear of rocking the church politics boat. So far, two clerics have bravely resigned in protest against the St.Paul's administration decision to seek a court injunction for evicting the protesters. There are many letters from clergy all over the country to newspaper editors, supporting the protesters and lamenting St.Paul's Cathedral authorities' attitude. Thus far the voice which should take the lead - that of Rowan Williams, Archbishop of Canterbury - has been deafeningly silent.

Surely this is a golden opportunity for him to define what being a Christian means and what relevance Christianity has in this Mammon-led world? If speaking out in support of the protest will endanger his position in the church and cause shock waves to ripple through the halls of hierarchy, well, so be it. Such a courageous gesture would do more than hundreds of sermons and conferences to inspire those who have given up on Christianity for not being Christ-like enough. 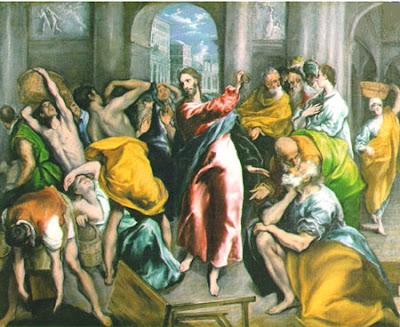 MORE
Posted by Natalie d'Arbeloff at 9:44 pm No comments:

Another month has streaked by. Where have I been all this time?  Well, here's my first excuse:

Persuaded by dire warnings of ever more virulent types of flu waiting to attack us this winter if we are not vaccinated, I went obediently to get the shot. As soon as I walked out of the local health centre - I'm not making this up - my throat began to feel prickly. By the time I got home I was sniffling, sneezing and limbs ached. The doctors say a reaction may set in after twenty-four hours and will last only three or four days. I must have a speedier and more contrary immune system because my reaction was instantaneous, has lasted over a week and is still not quite okay. I may or may not now be resistant to the latest flu virus but I sure as hell am not getting shot in 2012.

Second excuse: I was making a stop motion animation. Or rather trying to make a stop motion animation just because I said I was going to, didn't I? As everybody knows who has ever tried, animation, especially stop motion, is a slow, painstaking process requiring infinite patience and precise attention to detail. Well, I wanted to see instant results and so did my usual thing of cutting corners, lots of corners, and improvising - all the while sniffling, sneezing etc.

I had already made the Naugustine paper puppet (see October 7th below) but her wire joints weren't holding so I had to re-do her and hinge her parts with needle and thread - excruciatingly fiddly! I wrote a short script and made the Doremy Faxman puppet, hinged in the same manner. Too impatient to build a proper copy stand and get proper lights, I set up the camcorder on a tripod above my desk but couldn't, of course, make the lens point straight down because the tripod legs were in the way. For lighting there was only my desk lamps, so there's a pinkish cast on everything and the dialogue, written by hand on the white backgrounds, is barely visible. And when I started moving the puppets, I didn't do it smoothly or slowly enough. I used iStopMotion Mac software (bought ages ago and never used until now so my version is already obsolete) to capture the frames and put them on my computer. Then began the editing process: tooth-grindingly, eye-wateringly, repetitive-strain-injuringly slow and tedious but being obsessive as well as undisciplined, I stayed up all night, several nights, then did it all again in iMovie, adding all sorts of effects in attempts to slow down the jerky action and improve readability, but then deleted it all after realising that the original simple rough cut was much better. Imported that rough version to Garage Band and added an improvised musical sound track - couldn't add speech because the action is too fast.

So, here is the very very rough, very very fast fruit of all that impatient labour. I will do a smoother, more proficient version by and by, but have to say I am not entirely displeased with this amateurish first draft. Because the text flashes by too dimly and too quickly to be read, here is my script:

Doremy Faxman (Hard-hitting Media person/interviewer):  So, Naugustine, why are you here?
Naugustine:  That is the question I ask myself every day.
Faxman: Come on! I asked you why you're on this show and you start waffling on about the meaning of life!
Naugustine: Sorry, I thought you meant...
Faxman: I know what you thought I meant. Just answer the question!
Naugustine: Well, I'm on this show because I'm not a celebrity and I thought it might...um...give me some...um...publicity.
Faxman: I'm afraid I have to terminate this interview, Naugustine.
Naugustine: But why? I haven't even started!
Faxman:  You've broken the rules of this show . NOT a CELEBRITY dot com does not permit non-celebrities to seek celebrity by appearing on this show.  This is Doremy Faxman saying goodnight non-celebrities, wherever you are!

The video is on the main Blaugustine blog, on Vimeo, on YouTube and here:

About a year ago...or is it two years?...my Italian grand-nephew, when asked what he wanted for his birthday, made a rather unusual request for a young boy: a painting of my sister and me. He was thirteen only a few days ago and he and his father are coming from Rome to see me this weekend.

I started the painting...whenever that was...but wasn't happy with it and turned it to the wall for quite a while. I scraped out and re-started umpteen times until the canvas acquired a rough textured surface. Unable to procrastinate any longer, I have finally finished it. Probably it could still be re-worked but I'm going to leave it as is and hope Emanuel will like it.

I've called it Two Sisters in Time and inserted images of ourselves as children in the faceted background. Dividing a background into vertical strips of variegated colour is something I have found myself doing over and over again for a very long time, going way back to some of my earliest paintings as a teen-ager. It's not a conscious decision - it just happens. The feeling behind it, I think, is a desire to escape from realism into a more abstract dimension, but not entirely. 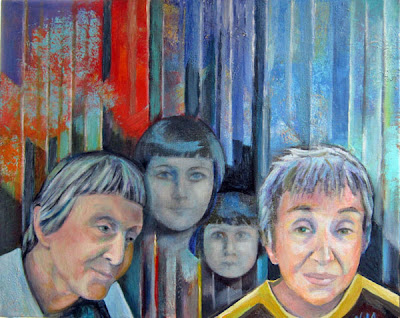 Below is another painting using vertical facets but I allowed abstraction to dominate this one. It's from 1994 when I had a SPACE studio in Hackney - the first photo was taken there. I had the idiotic idea of using this unstretched painting as a coffee table covering, folding the edges down all around. Thus it remained until a few weeks ago when I suddenly decided that it deserved to be rescued from a utilitarian role and treated more like art. I had to cut off the damaged edges, so the canvas is somewhat smaller than its original version, but I think it's survived life as a tablecloth pretty well. 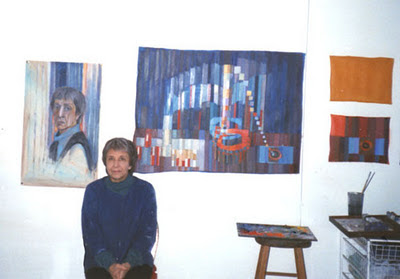 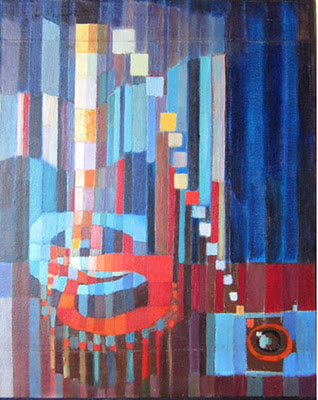 VISITORS AND A PUPPET SELF

It was my great pleasure to welcome Beth/cassandra and Jonathan to my home on several occasions during their séjour in London and a few of us UK blogger friends, including Dick/patteran pages, met for lunch at a pub in my neighbourhood on Sept.28th. Here are a few photos of that occasion, not including the camera-shy and the camera-phobic. 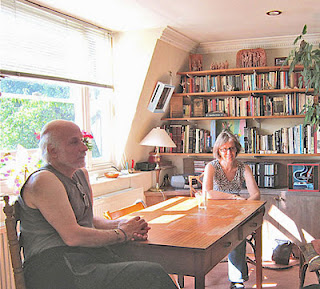 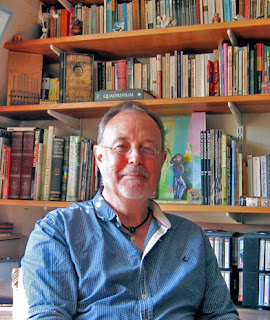 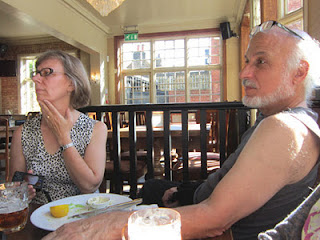 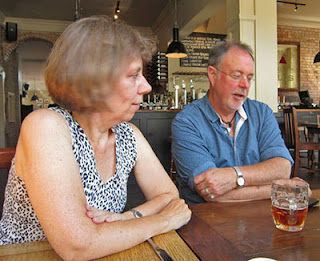 You must visit Beth's blog to get the full flavour of London seen through her eyes. Jonathan's photos will also, I hope, appear on his site at some stage - it doesn't seem to be online at the moment.

Enthralled by the clive hicks-jenkins maquettes and by his idea of having an online exhibition of some made by blogger friends, inspired by his example, I decided to try my hand at articulating paper figures. What emerged was a creature who is an amalgam of Natalie and Augustine, somewhat flattering both of them. I haven't got the hang of making smooth joints between the articulated parts yet so it's very rough but I like it anyway. I love the possibility of making Naugustine move and am considering doing some video animation experiments with her. 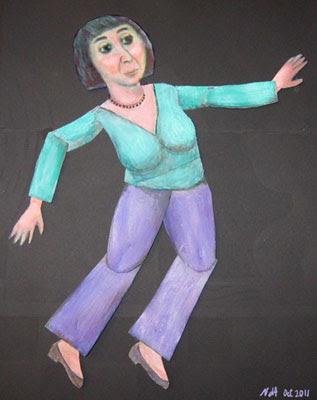 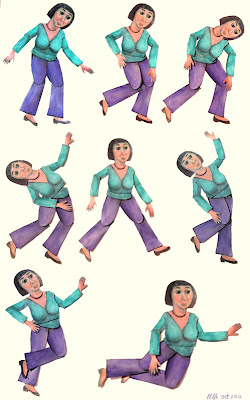 MORE
Posted by Natalie d'Arbeloff at 12:32 am No comments: