I am not a cat blogger. I don't have a cat and don't want a cat. Or a dog. Or a hamster or a rabbit or a parrot. I love all animals but do not want any of them as household pets. Not ever.

In the street where I live there is a strolling cat, a flaneur. This cat probably lives in a house nearby, is well-fed and well cared for but is not a home-loving cat. He - I assume it's a he - is a free spirit, a wanderer. He hangs out. Everybody knows him and caresses him - he ambles by and rubs up against your leg, anybody's leg. He's promiscuous that way. For a while I thought I was his favourite because if he saw me coming he'd run across the road and follow me to my doorstep, demanding to be allowed in. So I took him up to my flat once and let him wander around, offered him milk, cake, ham, ice cream - all of which he refused. After a short inspection of my premises he demanded to be let out. Next time I saw him on the street he ignored me. Then disappeared for weeks. Okay, I thought, see if I care. But I bought a box of cat biscuits, just to have on hand. We met again by chance and I invited him to my place once more, just casual-like, no committment. He tried the cat biscuits and liked them. I called him pussykins but that sounded too soppy so I changed it to Pushkin.

When I came home yesterday evening I saw Pushkin sitting in the open garage of a house near mine, looking vague, spaced out. If he were a human I'd say he was stoned. I called him and persuaded him to follow me home which he did without enthusiasm. Inside the apartment he walked around dreamily, apparently remembering the layout of the rooms. He stretched out on the floor of my studio for a while then went downstairs and laid on my bed.

I got my camcorder and filmed Pushkin as he nodded off. Sam Taylor Wood made a movie of David Beckham sleeping. I'd rather watch Pushkin than Becks sleeping. I edited the movie and put together a soundtrack with bits of loops from Garage Band.

After a nice long nap Pushkin ate some cat biscuits. Then I let him out to continue his wanderings. I am not a cat blogger.

MORE
Posted by Natalie d'Arbeloff at 1:17 am 2 comments:

OUR DAVE IN LONDON

The Via Negativa is a road well-travelled, at least in Dave Bonta's cyber-corner of it, even if in the real world it is hidden in Plummers Hollow, a Pennsylvania mountain woodland richly populated by a great variety of animal, vegetable and mineral wildlife, every specimen of which our Dave knows personally, addresses by proper name, and often photographs, films or writes poems about. I say our Dave because he's a friend among good friends, first encountered in the blogosphere, then in New York in 2007, then last week right here at home. Here he is looking at the cyclops-eye of my camcorder while we talk - a rambling conversation which he recorded and which will eventually appear on Via Negativa as a podcast.

It takes a very good reason to lure this hermit-ish poet/ philosopher/ naturalist away from his porch in the woods and the excellent reasons which brought Dave to the UK for two weeks were a book, a reading and an exhibition. The exhibition: Clive Hicks-Jenkins' 60th birthday retrospective at the National Library of Wales in Aberystwyth, beautifully documented on Clive's Artlog. The book: The Book of Ystwyth for which Dave contributed poems; and the reading of his poems, along with the other poets, as part of the festivities around this prestigious event. You can see more about all this on Via Negativa including links to other bloggers who have written about it.

I enjoyed Dave's visit so much, savouring the peaceful attentiveness he gives to everything, a rare quality that I can learn from. The attention I give to the world is often agitated by ego-driven judgements and coloured by emotions - not the best way to use one's perceptive faculties.

MORE
Posted by Natalie d'Arbeloff at 10:35 pm No comments: 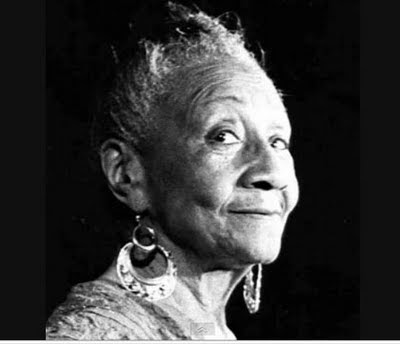 I found her by chance on YouTube and I am making her my role-model from now on. Here is proof, if proof is needed, that age cannot wither the singing/dancing/creating/celebrating spirit if you only let it fly. Inspiration for us all.

MORE
Posted by Natalie d'Arbeloff at 6:51 pm No comments: