and it's typical that I wait until the very end of the day to mention it. Once, when I held  back until the last moments of a workshop just as everyone was about to leave, to say I wanted to speak, the psychologist leading the group looked at his watch and said "Do you always wait until the last minute to ask for attention?" I admitted, yes, that's what I do. But he stayed, everyone stayed, and I had my turn and it was life-changing.

That was thirty-eight years ago but I'm still convinced that time waits for me and that I can stretch it like elastic and that, somehow, I can get away with it. Just because. Because it's me. It's also the reason I avoid as far as possible answering the question "How old are you?" Call it denial, call it delusion, call it whatever you like but some stubborn little voice insists that I don't have to follow the rules of time and I'm not going to contradict that comforting and optimistic voice with stupid facts.

Asking for attention (late) was, I suppose, the main reason I started this blog ten years ago and am continuing it, though less frequently. All sorts of other factors come into it but at the core was (and is) the perennial cry:

Hey! I'm over here! Hello? Anyone there?

Isn't that the cry heard all over the internet, with various degrees of intensity or diffidence? Expressed beautifully or poorly, patiently waiting or giving up when no echo is heard? We all want to communicate, to share, to eavesdrop, but I think that a basic human need is to be acknowledged, to be recognised. As in: oh, there you are!

I AM. You ARE. That's what blogging is about, isn't it?

Serendipitously it was via one of my favourite blogs that I recently discovered someone whose thinking resonates profoundly with me, Professor Jacob Needleman. Lucy, of box elder fame, mentioned that Tom, her husband, has just started his own blog, gwynt, so of course I went to check it out and was not disappointed. Go there to savour for yourself his perfectly presented and nourishing food for thought. I was also intrigued, in his profile, by the list of Tom's favourite books and that's why I followed up Prof. Needleman on Google and then, excited, ordered his book Lost Christianity which I am currently enthralled by.

But it's five minutes to midnight now so I'll be damned if I don't post this before my blogday celebration ends! No time to include an image...I'll do that tomorrow. Go ahead, congratulate me!
Hey, anyone there?

OPEN BOOKS at BAY ART, CARDIFF and the BUTTERFLY EFFECT

When bombs explode at the Boston marathon, an earthquake strikes deep in Iran, a gold mine collapses in Ghana and this planet daily palpitates with every conceivable tragedy it seems insanely trivial to be mentioning an art exhibition in Cardiff but if I start to weigh things according to their universal value then I might as well stop right here and forever hold my peace while the animal I call Pushkin whose owner named him Ben though his real name is simply cat sleeps on an orange chair next to me, well, this too is trivial compared to the incomprehensibly vast and shockingly indifferent cosmos but there's the butterfly wing effect, isn't there? So maybe nothing is irrelevant and it's not too reprehensible to write insignificant blog-posts. 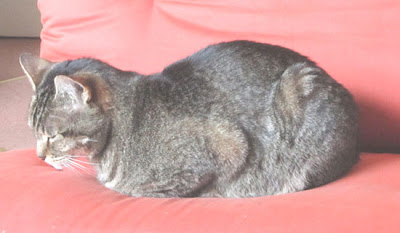 I arrived in Cardiff by coach on Saturday afternoon in driving rain, wind and cold so it was a relief to enter the cheerful Bay Art Gallery and see a few familiar faces among the crowd. I was greeted by Mary Husted, the artist and Open Books exhibition curator and her husband Professor Andrew Vincent who were my kind hosts for the weekend. I was also glad to see the poet Ivy Alvarez, a blogging friend who lives in Cardiff.
The sixteen artists' accordion books were beautifully displayed on individual shelves and tables or hanging on the wall, making it possible for visitors to get up close to each work. While the National Library of Wales in Aberystwyth did a superb job of showing these books when the exhibition first opened there last year, the necessary glass cases do create a distance between the audience and the work which this more intimate setting eliminated. As usual in such occasions I intend to take many photos but end up with none or very few since it's more interesting to talk to people than to record the event. The composite photo below was taken and designed on her i-pad by Mary Husted's talented 11 year-old grand-daughter.

The two photos below are the only ones I managed to take and they are, egotistically, of My Life Unfolds. I don't know who the people talking in the corner are but they make a great tableau of their own. 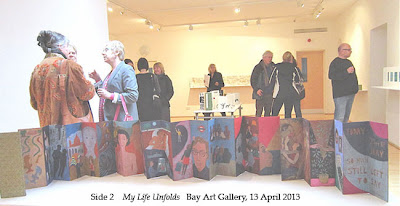 Probably my favourite construction is one called The Lesson. A short video of it is here but there are many other possibilities that this odd tableau suggests which I haven't yet explored. It was originally inspired by the bathroom in the flat where I was living: there was a narrow, deep-set window looking down onto a tall tree which I could see when I sat in the bath. I was drawing Augustine cartoons at the time and the giant bird with a message just popped up out of nowhere.

The initial walls/folds of the scene are lined with mirror-foil and in this photo they reflect a plant in my living room. There's a tiny book on the window sill next to a blue crystal ball, the title is Pensieri in Italian. It's a miniature book I found. I painted images over the text of some pages, repeating motifs from this scene. 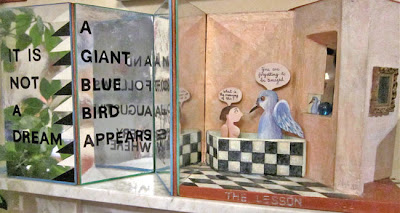 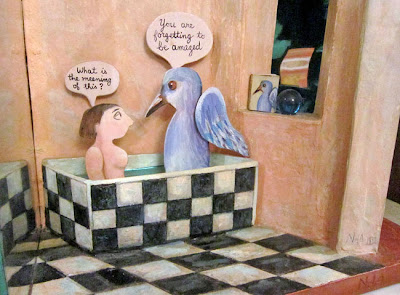 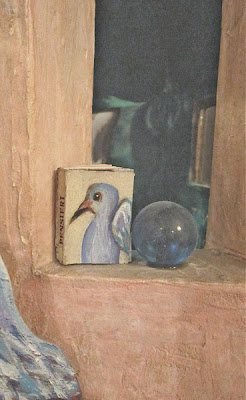 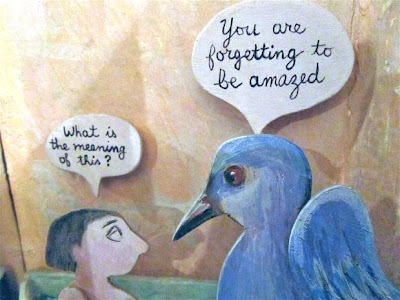 MORE
Posted by Natalie d'Arbeloff at 2:56 am 2 comments: