Had my second Pfizer jab yesterday morning, twelve weeks after the first one. So I'm all jabbed up now, waiting for the world's unlocking and the eyes' unblocking.
Posted by Natalie d'Arbeloff at 12:55 pm No comments:

This is not art but it deserves a place in the Museum Of Overdone Things (MOOT). It is the chart I made four weeks ago after the second cataract operation to remind myself of when and which eyedrops I was supposed to insert daily and for how long. Without it I might have remembered the routine but can memory be trusted? No. Tomorrow, Monday, will be the last day of Maxidex but Monopost continues indefinitely. Those are my orders and I am obedient, within reason. If reason plays no part whatsoever in orders of any kind then I do not obey.

In order to see letters on screen and keyboard as I type this I am still using a large magnifying glass because close-up vision is more or less (expletive that rhymes with lucked). It was explained to me by the ophthalmic surgeon that near-vision will be restored when I get prescription glasses. I will go to high street opticians to have glasses prescribed in another week or so. Mustn't be too soon after the de-cataracting. I sort of miss my cataracts.

Et voilà. This explains why I haven't been posting lately. If I'd typed this without magnification and loads of corrections it would be nothing but typos. 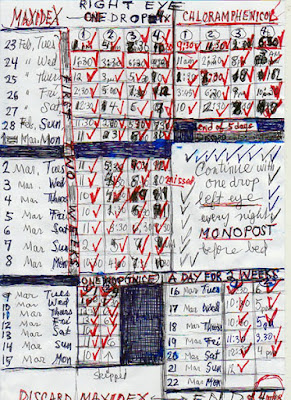 The particular aspect which baffles me (not for the first time) about the whole Royal myth is the degree to which so many people, both inside and outside the establishment, all over the world, participate in the myth whilst knowing perfectly well that it is a myth and with evidence clearly in view to anyone who cares to look, that Royals (throughout history) can and often do behave as badly as 'ordinary' people, sometimes worse, because they can get away with it. Yet the veil of mythology which coats eyes more effectively than cataracts makes it seem that really bad human behaviour, even criminal behaviour, simply does not ever happen within Royal circles because these are superior beings living in a superior world where such things simply don't happen. So when Opra Winfrey's mouth along with the world's collective mouth drops open when Meghan or Harry mention that an anonymous Royal asked a racist question, the collective assumption is: OMG! You mean that a Royal can actually be racist? As well as all the other awful things that any Royal might be? Impossible!!

The mythology will no doubt persist but if the veil can be lifted even a little, then I give Meghan and Harry credit for this cataract operation.

Maybe it’s because I wasn’t brought up in the UK but I absolutely do not understand the whole THING, the whole kerfuffle palaver sound and fury and earth-shattering repercussions of a TV interview conducted by celebrity Oprah Winfrey with celebrity couple Meghan and Harry, a nice couple in love, happy with their adorable little boy and the no doubt adorable baby daughter inside Meghan’s bump. They’re sitting in the garden of their beautful house in California telling Oprah why they left home - or rather Harry’s home, a palace inside an institution they call The Firm which is actually The Monarchy and that’s why the Media, the Tabloids, the Royals, the Courtiers, the Pundits, the influencers, the Presenters and The Public - zillions of them all over the planet - have been watching and listening open-mouthed, entranced and/or outraged by every word dropping from the celebrity lips.

Now all those entranced and/or outraged people here in the Disunited Queendom are feverishly outdoing each other in analysing, predicting, condemning or praising every word that was pronounced by that celebrity couple having trouble with their family. The only difference being that, in this case, the family are The Monarchy and, in the eyes of zillions of people, the Monarchy and Monarchs themselves are not like other people. They can do no wrong and if they accidentally happen to do wrong it must never be called “wrong” and certainly not admitted. Ever. The Institution of Monarchy must survive. That’s just how it is, they say. The Firm’s problem is: the rebel couple in California want to tell everybody how it really is.