FOR A GOOD FRIDAY 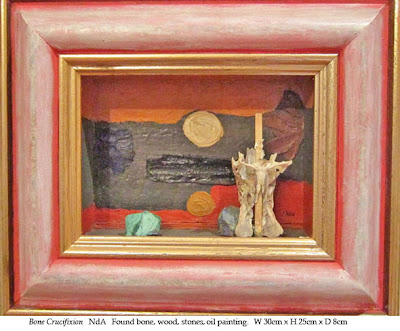 I don't remember where or when I found the bone/skeleton which inspired this assemblage nor do I know what creature once animated it. But its extraordinary ressemblance to a crucifixion immediately struck me. I inserted a thin strip of wood behind the 'crucified figure' but otherwise altered nothing. A small palette knife painting I did a long time ago provided a Middle Eastern kind of landscape and two small stones plus a suitably deep frame completed the scene.

Even though I was brought up Catholic I have never felt I fully belonged in that tradition - there are too many things I question and disagree with, and that goes for all religions. As I try and usually fail to explain whenever the subject of faith comes up, I do believe in God but I don't believe that God is a member of any human religion.

The concepts we are taught, whatever culture we come from, are merely the opinions, the points of view of human beings, shaped and solidified by repetition over thousands of years. But faith itself is something else. It has an independent existence which is not necessarily the result of any kind of indoctrination. Some people are believers because they've never questioned their tradition, some because they've been converted to or have freely chosen a particular tradition. But some simply 'have faith' - it is part of them, like their name or the colour of their eyes. It's not a crutch, not a consolation for all the suffering life doles out, and not an explanation. Inexplicably and illogically, it just is. That's my position.

That a crucifixion should be the main symbol of a creed which, before becoming institutionalised as a religion, was based on love - love of God and of our fellow humans - seems to me very strange. Couldn't they have made a logo for love instead of suffering? Suffering is always unjust, unfair, tragic - whoever it afflicts and for whatever reason it happens. Jesus on the cross did not deserve to suffer. No one deserves to suffer.

On this Good Friday I send love to all who suffer, whoever and wherever they may be, and may the God they believe in, or do not believe in, bring them a resurrection.

A while ago I mentioned that I was waiting for an exciting new project to be confirmed. Well, I can now reveal that it is definitely going to happen.

A new collaboration with The Old Stile Press on a limited edition book: Dick Jones' wonderfully spirited English translation of Blaise Cendrars' (Fréderic-Louis Sauser) chef d'oeuvre, the long poem Trans-Siberian Prosody and Little Jeanne from France, illustrated by me. Our project has received the blessing and agreement of the rights owner, Miriam Gilou Cendrars, daughter of Blaise Cendrars, a most interesting person in her own right. I'm currently immersed in her marvellous biography of Cendrars which brings to life this elusive and complex poet so vividly that you feel part of his circle of friends, family, lovers, critics and collaborators and the time and places in which they lived.

Preparatory work has been simmering for the last few months but my task of creating the images and making the relief blocks to be hand-printed by Nicolas McDowall begins in earnest now. It's going to take a long time before the finished book appears but I know it will be stupendous. I'm not going to blog about the work in progress - I think that would spoil the final effect.

For now here are a few more not-so-recent constructions/assemblages. By the way, in case you were wondering, some of those I've been posting are for sale. If interested, email me please. 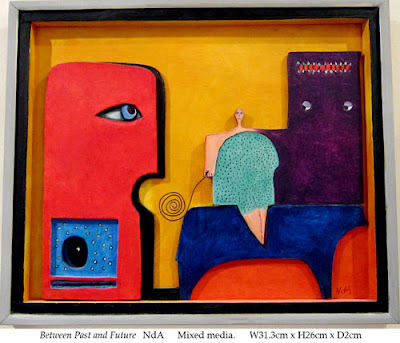 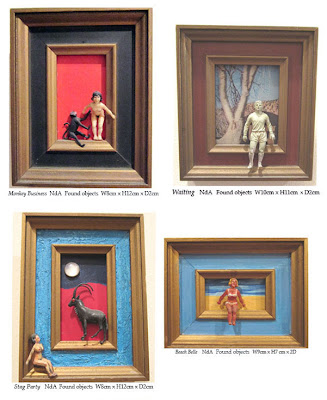 Miss Pepsi might be her given name but she has never touched the stuff. She's made of tin and her smile is forever fixed. She's jolly but something in her eyes tells you not to mess with her. She might be saying come hither or bugger off or wadder you lookin at? She's seen better days but makes the most of her unorthodox appearance. 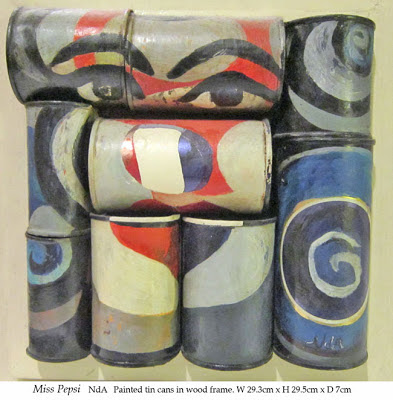 CRIMES OF THE IMAGINATION

That's the title I gave to this construction, consisting of found objects arranged inside an old cigar box. There is a story to it but I prefer to leave it unexplained - spectators can invent their own story. The hole in the cover reveals the clockwork of the vintage pocket watch attached inside the box. The handwritten text reads:

The Prince (the Prince?) departs
broken-hearted.
The Princess has fallen (fallen?)
off her pedestal.
Time runs out.
Now the truth
will never be known.
Real tears are shed. 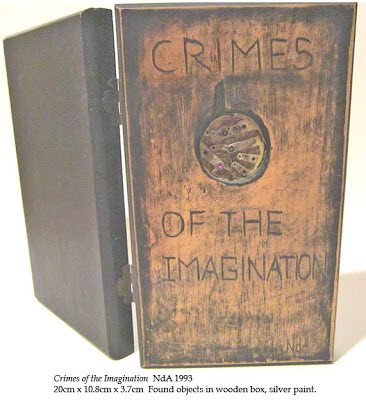 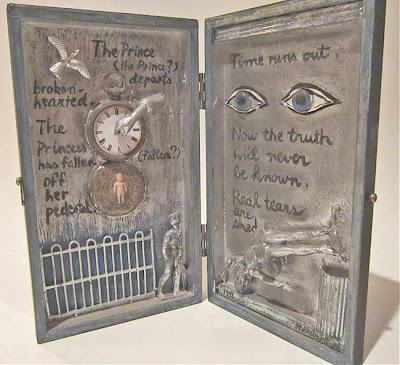 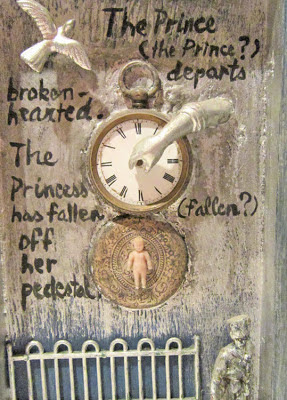 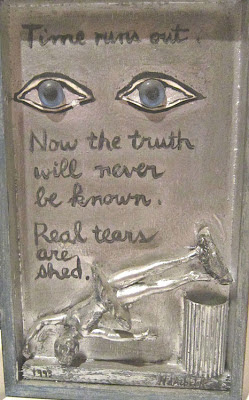