Why haven't I been blogging all this time? It's complicated. No it's very simple: I've been doing other things. Such as re-working the painting formerly titled Frames of Reference. I thought it was finished when I left it in 2010 but pulling it out recently I suddenly saw all sorts of things to be done. I want the figures to fuse into the background and there is far too much visual information. The multiple dimensions and my parents' dominant faces make it a difficult struggle especially since I'm also attempting to approach cubism in my own way. I've always been interested in both cubist and constructivist explorations of pictorial space and I'd like to see where a somewhat different perception would lead me along that road. 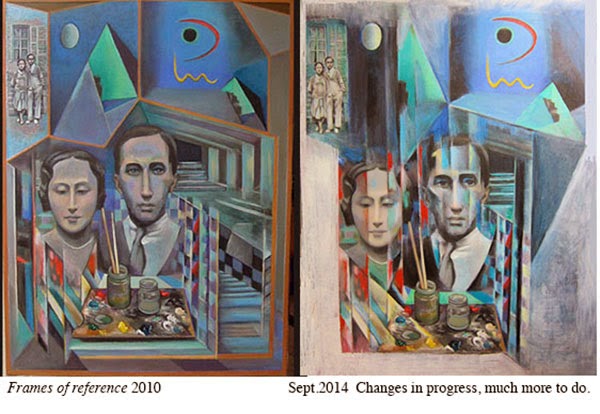 Another thing I've been working on is a portrait of a friend, the brilliantly inventive architect/designer/comics artist Sylvia Libedinsky. When she came to my Pineapple celebration wearing a red and black striped dress I instantly wanted to paint a portrait. She agreed to sit for me wearing the same outfit and I started a fairly large canvas. But it didn't work out and wasn't what I was after. So I then cut a relief block and took some prints from it in various colours. Finally I inked and painted the block itself and this is the portrait I prefer. It isn't flattering but Sylvia says it is her. I hope it captures her enquiring, observant, mischievous, funny and melancholy spirit. I'm pleased with its ikon-like character, enhanced by the bas-relief and the gold I rubbed on some of the stripes. 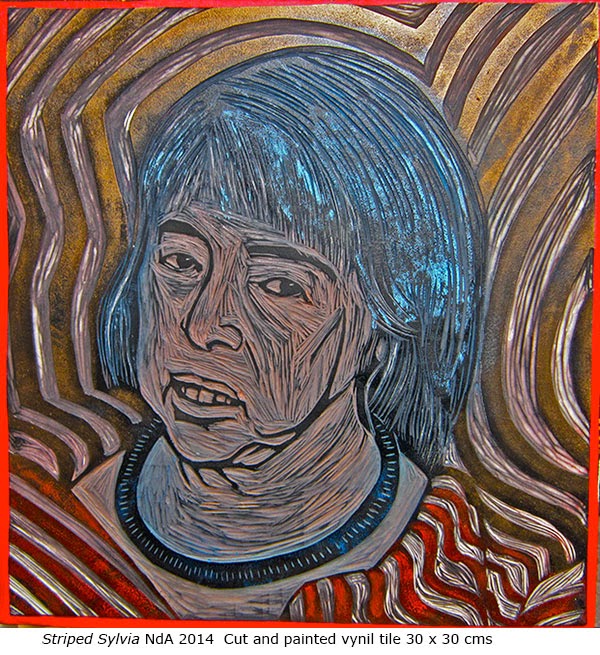 I went to the Malevich exhibition this week and came away exhilarated and inspired. Walking along the South Bank afterwards I saw geometric blocks of primary colours moving towards and away from me in an animated re-enactment of Suprematist paintings. That these colours were strolling pedestrians wasn't important yet the presence of life was felt by its movement in space. 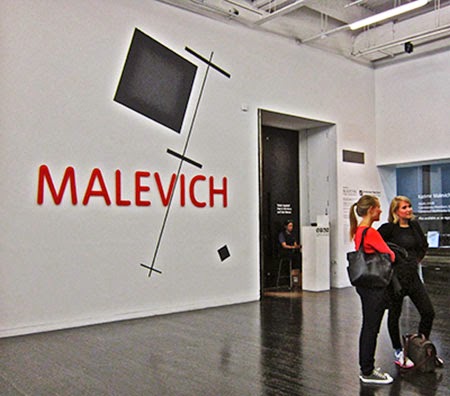 Pure abstraction, in art or in life, is not my calling but that doesn't mean I can't appreciate it and Malevich is among those I give homage to. His controversial black square was a bold manifesto for that period, a statement, like Magritte's later this is not a pipe. Malevich seems to say: this is not a window through which you can gaze at an illusory scene. It is just a square made of black pigment. But if your eyes are turned inwards you can also read it as a symbol, like the black stone of Mecca or the alchemists' Nigredo or the philosophers' Néant. Spiritual concepts played a greater role than is apparent in the evolution of non-objective art and Malevich, like Mondrian and Kandinsky, was particularly influenced by ideas elaborated in Theosophy and Anthroposophy. Reproductions of Malevich's paintings do not give any indication of their sensuous, tactile surface - the paint is laid on thickly, with raised edges where one colour meets another - and oddly enough, this loving attention to materiality makes you feel that they are about something more than matter. I'm allergic to 'holy pictures' whether traditional or alternative but early Russian and Greek ikons have a tangible spiritual presence for me. Their power is conveyed by very direct, solid, simple means and their reality is emphasised by strong, pure colours and gold embellishment. Whatever the spiritual or other-worldly may actually be, if it can be depicted at all then I'd say abstraction probably has one foot in the door.

A photo I took when leaving the exhibition became a Photoshop exercise in abstractification. Not Suprematist or Constructivist enough, too many colours and tones.

Then there was this ready-made Constructivist landscape outside on the South Bank. 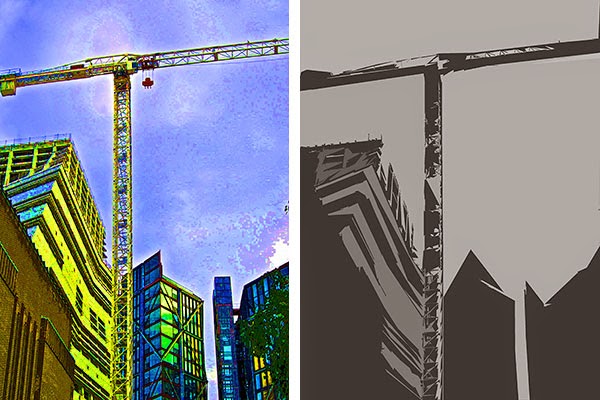 And a reclining couple just waiting to become a sculpture or a poster. 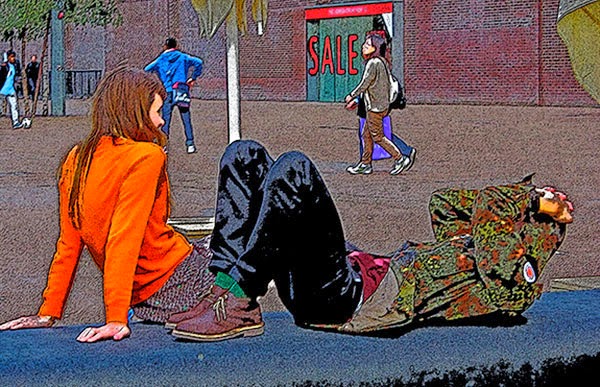 And that's all for tonight folks.
Posted by Natalie d'Arbeloff at 1:41 am

I love the portrait of Sylvia - what a successful fusing of your different styles. Do you think you may do more paintings/portraits in this style?

And I'm very interested by the connections/associations you make to Malevich. Not an artist I know a lot about, or have a huge immediate emotional response to, but I found the exhibition impressive and exhilarating, especially because I went with a friend who very much loves and appreciates his work.

Finally, that wonderful coming out of an exhibition and seeing pictures everywhere - oh yes, I know and enjoy that feeling; how wonderful to see it illustrated!

Jean,thank you. I should have mentioned that I also found Malevich's late portraits fascinating, the way that he manages to incorporate his constructivist principles with realism. I hadn't thought of doing more portraits as cut blocks but why not? I appreciate the suggestion!

I fear that most of this post went over my Philistinian head. I did like the work you have done on the parental picture, however.

Tom, this post was only about my own impressions, reflections and questions so I'm sorry it didn't connect with you. But never mind, there will be others!
Much more work remains to be done on the parental painting; will post the final result whenever it appears.

Natalie, interesting that you don't dismiss Malevich's late portraits. I read a few reviews of the exhibition and noticed the sharp divide between those who see these only as tragic evidence of his capitulation to censorship and those who find them much more interesting and subtle than that. I'm definitely in the latter camp.

I didn't see those reviews, Jean, but I think it's a mistake to write off those late portraits just because they've deviated from strict Suprematism. I'll bet Malevich himself was more flexible than those critics. You can see his struggle with social realism in the unconvincing muscular arms of the woman worker but those portraits, especially the terrific self portrait, have an authority that puts them beyond the range of petty art criticism and labels.

This is fascinating and educational and reminds me of the things that excite me about art,such as the way an original artist can change the way you see the world.Much appreciated especially since I live so far from art centers.

Glad it's interesting to you, Hattie. I'm lucky to live in a place that has so much on offer in the way of art but sometimes I take it for granted and forget it's there!

Thanks Adam. Hope your artwork, photographic and/or painted, is going well>

I wish I could get into your head and see things the way you see them and then put them out for others to see. Intriguing.

Ellena, welcome inside my head. Special 3-D glasses can be provided, if necessary.