Those of us who are shortlisted on the Laydeez do Comics 2019 Award for a graphic novel in progress were asked to make a short video about ourselves and our work. This Sunday, 31 March, those videos will be playing continuously on a loop at the LDC Festival at Free Word Centre.

For those who can't be at this sparkly event, here's my video. It's silent apart from a musical burst at the end (that part is from a video I made a few years ago but it fits so I added it.)


Natalie's presentation for Laydeez do Comics Award 2019 from Natalie d'Arbeloff on Vimeo.


Dinner at Kolossi Grill for Award shortlisters and LDC team on 30th March 2019. 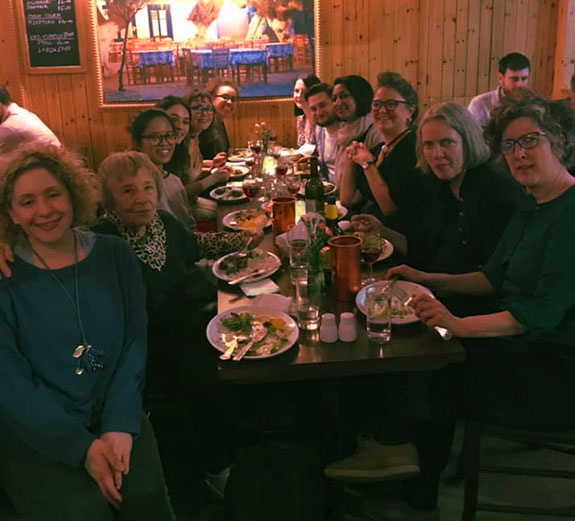 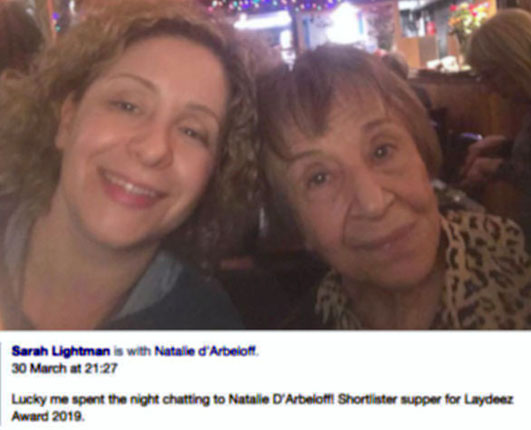 LAYDEEZ DO COMICS AWARDS TO BE ANNOUNCED ON SUNDAY

Award winners will be announced. My fingers, toes and eyes are crossed. All welcome on Sunday - see you there? 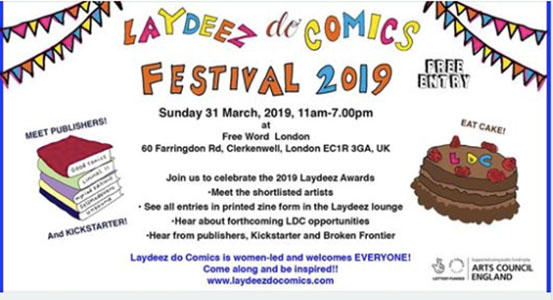 Just cancel the whole misbegotten misguided misleading manipulated miserable mess and let's get back to disagreeing with each other in a civil way without the spectre of catastrophe looming above our heads.

And there's THIS, worth reading too. 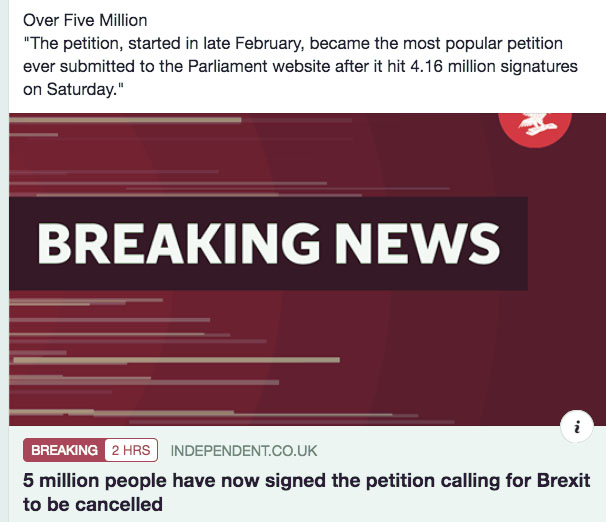 My relationship with the Deity is argumentative but generally good. Put it this way: we believe in each other. Whether you believe or disbelieve in a Deity is not my business and frankly, my dears, I don’t give a damn. Religion is a whole other story, a problematic one. Please keep in mind that when I say Deity or the G-word I’m not talking about religion, any religion. I’m referring to Something which is real, unknowable, and not a human construction.


I started drawing The God Interviews in 2004 as a comic strip, posting installments on my blog, Blaugustine. It got such enthusiastic comments that I decided to see if any mainstream publishers would be interested. Again I received the “lovely but not commercial” replies so I opted, reluctantly, for self-publishing.

Digital technology was now available and preparing a print-ready PDF, though time-consuming, was not a problem for me. I chose to have full colour throughout - a mistake which made printing the book much more expensive than it would have been had I stuck to black and white. Initially I used Lulu to print the book and sell it via a page on their website but their charges were too high so I found other companies to print extra copies on demand.

The God Interviews, the book, was launched at the Cartoon Museum in 2006 and had some excellent reviews but, as usual, I didn't have the contacts, the patience or the chutzpah to promote it adequately so it sits on the shelf, dozing. I’m out of copies at present but second-hand copies are generally available via Amazon or AbeBooks etc. Herewith the cover and some sample images. 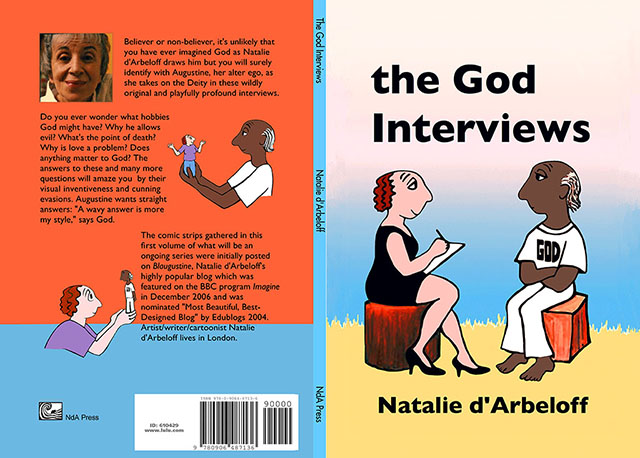 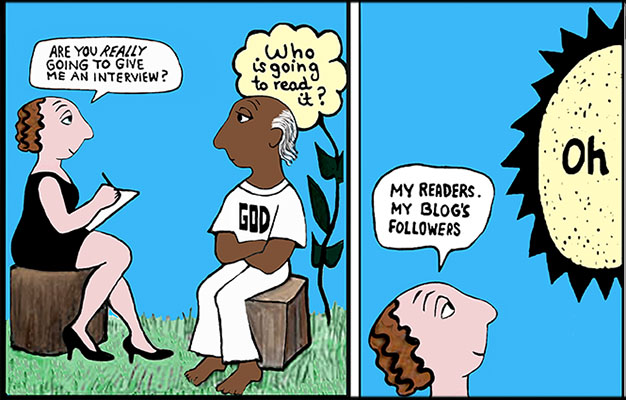 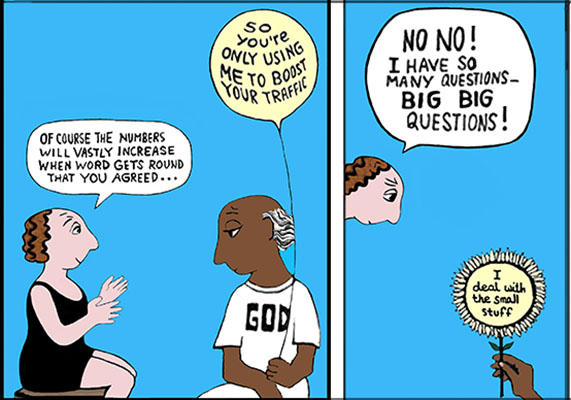 In 1979-1980 I drew/wrote (drote?) a journal to let off a lot of steam during a period dominated by a difficult and steam-filled relationship. Existential angst liberally sprinkled with self-deprecating humour, it ended up as Augustine's True Confession.

In 1989 I applied for financial help from the Arts Council to self-publish this book. Having painstakingly filled in the many requisite forms, obtained printing quotes, worked out a budget etc. I sent in my application and behold! It was accepted! The Arts Council of Great Britain gave me about £1000 towards the publication of Augustine's True Confession for which I was immensely grateful, even if the actual costs were twice that amount. Distribution and promotion, as always in self-publishing, were the problem and I gave away more copies than were sold. But eventually they were all gone.


In the photos below, the cover on the left is the one I used on that 1989 first edition. The simpler one next to it is on the second (current) edition published jointly in 2016 by NdA Press (me) and bookartbookshop (wonderful Tanya Peixoto) to coincide with an exhibition of some of my artists' books which Tanya invited me to hold at her legendary bookshop in London in May 2016.

You can buy copies of this edition right now for £10 (plus postage) either from:
bookartbookshop, 17 Pitfield Street, Hoxton, London N1 6HB
or from me (leave a comment below).

In 1984 my cartoon alter ego Augustine was born. Suddenly there she was, my fully altered ego. Why the name Augustine?

a) I was born in August.
b) My mother’s middle name was Augustine.
c) Augustine Road was a street next to where I lived at the time.
d) in 1979 I drew a journal titled Augustine’s True Confession (not yet the cartoon Augustine and not Saint Augustine either).

Up to 1988 I produced ten Augustine mini-comics in a series called SMALL PACKAGES. This was before digital technology therefore to produce and distribute these booklets, I used ancient processes such as photocopying, folding, cutting, stapling and sending via snailmail.

By word of mouth and innumerable letters I managed to acquire a list of about 200 subscribers. I charged only 50 pence per booklet and if they paid in advance for a year they received a new Augustine booklet every month, more or less. After a while I increased the price to 60 pence per mini-comic.

I was overjoyed when the Augustine Adventures got rave reviews from everybody who received them. See some of these reviews.

I loved drawingThe Augustine Adventures but all the photocopying, stapling etc. became a time-wasting chore and, feeling confident, I started searching for a publisher to take over the business of bringing Augustine to the wide world so that I could concentrate on creating new scenarios for her. Well, the world of publishers wasn’t ready forAugustine I have a file of pleasant rejections, including “Love it but not commercial enough.”

Discouraged, I ended the Small Packages series at booklet No.10, Augustine Angry. What a total freaking idiot I was!I should have continued, just carried on drawing the booklets, photocopying, stapling, sending them, and by now Augustine would be a household name.

Maybe I should bring out an Augustine Omnibus? Anyone want to subscribe? 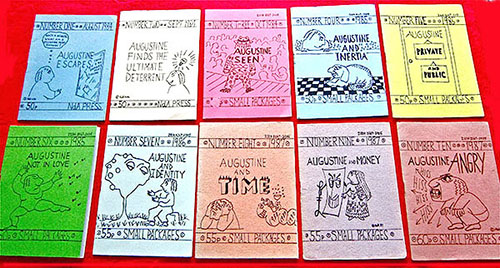 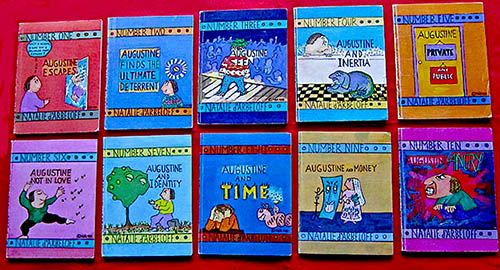 Posted by Natalie d'Arbeloff at 2:27 am 4 comments:

Returning to the subject of publishing, here's my experience of self-publishing.

I’ve always written stuff but not writerly writing, you know what I mean? I just have a habit, since childhod, of writing my thoughts down, at least those which seem worth a second thought, usually with images, often cartoons. I've accumulated projects for books galore (hardly ever fiction).

Whenever a book project has seemed to be ready for sharing with the world, I’ve sent it round to mainstream publishers and/or agents. But when there's been no response, or when response has been “Love it but it’s not commercial” (precisely what the head of one well-known publishing house told me) then I resorted to self-publishing. I’m not including here limited edition artist’s books because I’ve posted about these often and they’re featured on my website.


The preparation of an illustrated book for self-publishing is something I enjoy and with digital technology it's become fairly easy if you have a knack for that sort of thing. The problem comes once the book is ready and you, you alone, are responsible for promoting and selling enough copies of this creature to cover your printing costs, or even make a small profit or, failing both of those goals, at least to find somebody who will write an intelligent, attentive review of it, preferably not family or friends who believe everything you do is genius (okay I don't have many of these).

Here are my self-published so-called Trade Books: intended for mass-market distribution at low-prices. I’ll elaborate one by one in the next posts. 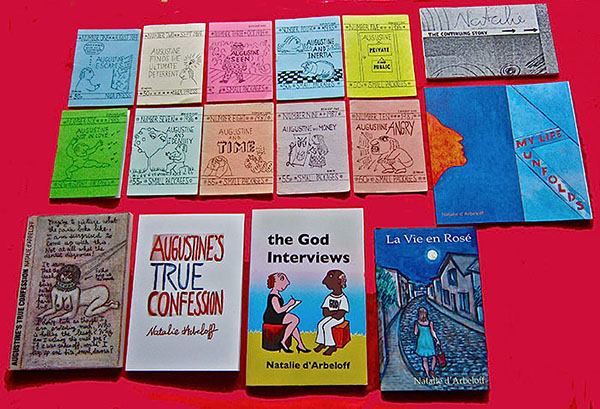