Yesterday I went to see this very BIG exhibition at the Royal Academy.

David Hockney is loveable. The politely jostling, smiling crowds lining up to bask in the glow of his latest pictures surely agree. His status as a National Treasure is not in doubt and even though he's lived a large part of his life in Los Angeles, Englishness can never be divorced from Hockney anymore than it can be from cups of tea, Monty Python or the Beatles. However, California did leave large thumb-prints in the Hockney psyche and, in my irrelevant opinion, that is a shame.

Before I launch into my critique, I must affirm that I am among those who love Hockney. I wish he was my friend so that we could have stimulating conversations about painting, buzzing with insight and discovery. I love his mercurial enthusiasms, his analytical and perceptive eye, his humour, impishness and no-bullshit bluntness, his inventiveness, committment, and the loneliness lurking behind the panache. So, with all that loveability plus the National Treasure status to contend with, I feel rather hesitant about airing my view of the current exhibition. There must be many sycophants in Hockney's entourage and I wonder if even his friends dare express anything along the lines of: hey, Emperor, aren't you feeling the cold? Well, here goes. Deep breath.

Too many of the paintings in this show are there because of their BIGNESS, because that was the agreed gimmick, but I can't believe that the curators, and Hockney himself in his heart of hearts, could not see the eye-watering superficiality of, for instance:The Arrival of Spring in Woldgate, East Yorkshire (oil on 32 canvases joined together). As a cheery restaurant mural or a backdrop for a Disney frolic, okay, it could work. But the appropriate format for it is a greeting card, ordinary greeting card size. What is the point of a super-gigantic painting, whether on a single canvas or a grid of 32 canvases, if everything about it is small and superficial, both in concept and execution?

As for the painting inexplicably chosen for the poster and all the advertising:Winter Timber 2009, am I the only one who sees limp spaghetti or McDonald fries instead of logs laid out on the road? Is it possible that the famously acute Hockney eye did not notice this unfortunate ressemblance? As a brilliant draughtsman, how could he be satisfied with this banal image, which doesn't even have the saving grace of being a joke? Contrary to the BIGGER PICTURE theme of the exhibition, it is the largest works which are the least interesting, the most contrived, whereas it is in smaller single canvases, sketchbooks, and some marvellous charcoal drawings of trees that the unique Hockney talent is evident. 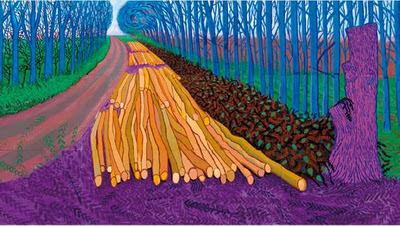 Van Gogh in Arles was obviously on Hockney's mind much of the time when he was painting en plein air in Yorkshire but Vincent's engagement and struggle with nature is a world away from David's in every respect. I don't mean this negatively: my favourite landscapes in this show are those in which Hockney has translated Van Gogh into Hockney-ish. My least favourites are those in which he lets his California, or rather his Hollywood, take over his Yorkshire. The iPad-ish cleverness, laid-back speediness, ice-cream colours and shadowless light, the cinematic showmanship - all very L.A.

But the Hockney I deeply admire is the terrifically original boy of the 1960s and 70s, before California had seeped into his Bradford psyche. His paintings, drawings and etchings of that period are truly inspirational to me. Now that he's back in England (for a while?) maybe the next stage in his work will be the fusion of those two worlds - perhaps a Smaller Picture, but a deeper one. David Hockney still has a lot of creating to do.

By the way, a lot of the reviews and catalogue commentaries mention the fact that he painted most of these landscapes en plein air, actually standing in front of the actual scene, outdoors in all kinds of weather, as though this is something extraordinary that nobody has done since the nineteenth century. Huh? What planet do they live on? Artists, brilliant ones as well as mediocre ones, Sunday painters and every day painters, have never stopped painting and drawing en plein air. So there.

I loved the 9-camera, 18-screen films at the end of the exhibition. Eye and mind-expanding.

If you're in London, go see this exhibition, it's absolutely worth a long, slow look. Disregard my comments and make up your own mind. Try to ignore the crowds and plant yourself assertively in front of anyone blocking your view. And it's easier to get tickets in person at the Academy rather than online.

Here is another video experiment, deconstructing and reconstructing parts of the first image from my ever-in-progress gnovel . One of my unspoken New Year's resolutions is to do something with this idea, maybe turning it into monoprints for an artist's book, or perhaps abandoning it altogether. Things that are left too long on the shelf tend to disintegrate anyway, according to the law of entropy, but declaring that you are giving up on a long-delayed project might just re-start its motor.

To embed this video, I'm trying out an extension I've downloaded called the Dreamweaver Video Inserter. If you don't see the screen at first, try again later. I haven't got the hang of using it yet and am getting some help from the makers.

Here's the VIMEO permalink in any case.

for these two quotes which are precisely what I need to hear right now:

"At every moment you choose yourself. But do you choose your self? Body and soul contain a thousand possibilities out of which you can build many I's. But in one of them is there a congruence of the elector and the elected. Only one - which you will never find until you have excluded all those superficial and fleeting possibilities of being and doing with which you toy, out of curiosity or wonder or greed, and which hinder you from casting anchor in the experience of the mystery of life, and the consciousness of the talent entrusted to you which is your I."  Dag Hammarskjöld 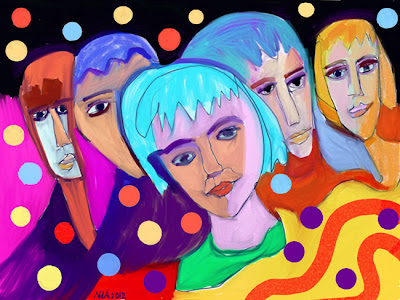 "I'm for mystery, not interpretive answers.
The answer is never the answer. What's really interesting is the mystery. If you seek the mystery instead of the answer, you'll always be seeking. I've never seen anybody really find the answer, but they think they have. So they stop thinking. But the job is to seek mystery, evoke mystery, plant a garden in which strange plants grow and mysteries bloom. The need for mystery is greater than the need for an answer." Ken Kesey

Back soon with resolutions to resolve.

MORE
Posted by Natalie d'Arbeloff at 3:08 am 3 comments:

HERE'S HOW TO START THE NEW YEAR RIGHT

NEW YEAR GREETING FROM ME TO YOU