WHEN COMPLAINING IS A MATTER OF LIFE OR DEATH

I have a knack for efficient and stubborn complaining. Probably from the French half of my DNA. In my adult life I must have written hundreds of complaint letters, some for myself, some for family or friends who thought I'd do a better job of it than they would. In all fake humility I must admit that, in most cases, (maybe in all cases but I can't remember) my complaints got the desired result.

Thing is, I'm not afraid to rock the boat. Especially when a boat is demonstrably and outrageously leaking. Injustice, deceit, misleading advertising, shoddy goods, negligence, broken contracts, slander, exploitation etc. instantly light my fire and l'm ready for sharply worded battle, all evidence in hand. In my next life I might be a lawyer for human rights. If any humans are left on the earth by then.


Sometimes a local or global crisis starts the complaint wheel spinning in my head and I lie awake inventing stratagems. Admittedly some situations are too big, too complex, too stuffed with experts and deskperts and despots for my little knack to be of any use at all. But the Grenfell Tower tragedy has been in my thoughts and in my heart ever since it happened and now there's also the issue of all the other tower blocks which are at risk of a similar tragedy. Yes, 'authorities' are now thinking about it and there will be meetings, committees, proposals etc.

But HOW LONG will it take before action? Months? Years? Not good enough!

Look at THIS
and THIS
and tell me if anger as well as despair is not justified. Constructive anger, anger which triggers and energises immediate constructive, effective action.  In a month, maybe less, the tragedy will slip under the carpet, that vast carpet which hides a mountain of wrongs. The issue will be postponed yet again.  Positive anger has a role to play, a vital role.

I had a thought this morning while walking in a cemetery:

Could the families of those affected by the Grenfell Tower disaster lodge a complaint with the Consumers' Association about inferior material used in the cladding? Residents of the building were, after all, consumers. They paid rent and taxes to the Council and therefore all of the building's appliances were products they bought. Could a case be made for them to sue the suppliers of the inferior, dangerous merchandise? As well as the Council, of course. Just as you could sue the makers/sellers of a sofa which burst into flames even though it was labelled fireproof.

Astonishing clairvoyance in this 1993 House of Cards televison series.
Posted by Natalie d'Arbeloff at 10:23 pm 6 comments:

THINGS I THINK ABOUT IN THE SHOWER

Could the world be run on kindness?

Could a to-do list be made of all the things that need to change in human nature?

And then could we just do it, on ourselves?

And if we can't completely change, could we change on two days a week, like that fast diet?

And if we still need to be selfish, greedy, power-mad, corrupt, intolerant, indifferent, deceitful etc. could we be a bit less of all that on the other days of the week?

And if that works, what would be the increase of kindness in the world?

Any answers?
Posted by Natalie d'Arbeloff at 4:36 pm 4 comments:

STATISTICS ON GOOD AND EVIL?

In the balance sheet of good and evil, what's the score? I wonder if anyone's ever compiled statistics. My ignorant guess is that the good far outnumber the evil, but the evil that the evil do is so terrible that it wipes out vast numbers of those who were doing good, or would have done good had they not died as babies. So statistics are useless.

Look at this devastating tower block fire: even if it started accidentally, it is not an accident. It is a crime and those responsible for it happening cannot claim innocence - they're on the side of evil, active or passive. The heart-stopping evil of strangers.

And look at the good pouring into the neighbourhood, bringing help, support, shelter, food, clothes, sympathy. The heartbreaking kindness of strangers. 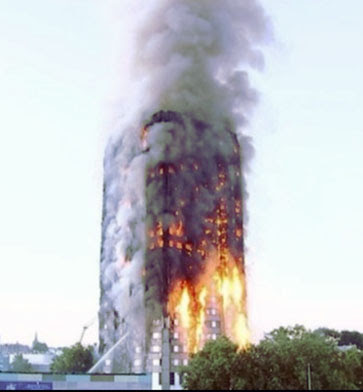 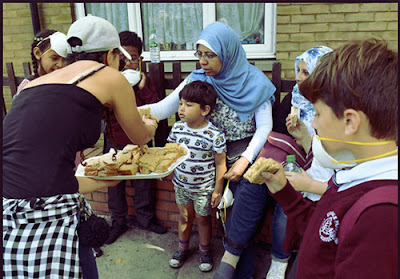 Posted by Natalie d'Arbeloff at 5:50 pm No comments:

Got stuck in a lift yesterday. A lift in a cube. A white cube. Have never been stuck in a lift before, ever, so it had to be in the White Cube Gallery in St.James, Piccadilly.

After looking at the few Wayne Thiebaud paintings parsimoniously spaced on the white cubish walls of the upper gallery and been disappointed (they're better in reproduction) I decided, foolishly, to take the lift rather than stairs to the rest of the show in the cube's basement.

A barely visible bell icon on one of the silver buttons indicated it was an alarm. I pressed it. It was a telephone. After several rings a languid voice spoke. Asked me to state the address I was speaking from. Whaddya mean the fucking address I didn't say. I said, sternly, that I was trapped in the lift at the White Cube Gallery and the fucking door wasn't opening. I didn't say fucking door, just door. The voice asked again for the address and this time I must admit I shouted. I shouted that all they had to do was talk to the receptionist on the other side of this fucking lift.

Finally the door opened and the surprised receptionist, cubishly cool, calm and collected, said "I never heard you". She turned to a visitor and asked "Did you hear anything?" The visitor shrugged. I emerged from the lift and exited the Cube, fuming. Never saw the rest of Wayne Thiebaud's pies and ice cream cones.

On my way home on the tube, a woman coughed in my face.

It was one of those days.
Posted by Natalie d'Arbeloff at 5:42 pm No comments:

A few individual prints from those editions are available for sale here.
And a list of other public collections where some of my artist's books can be seen is here.

Here are the four bookworks acquired by the BL recently. Full details can be found at these links: 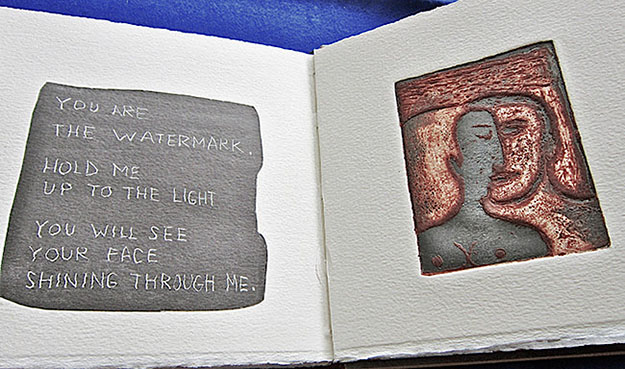 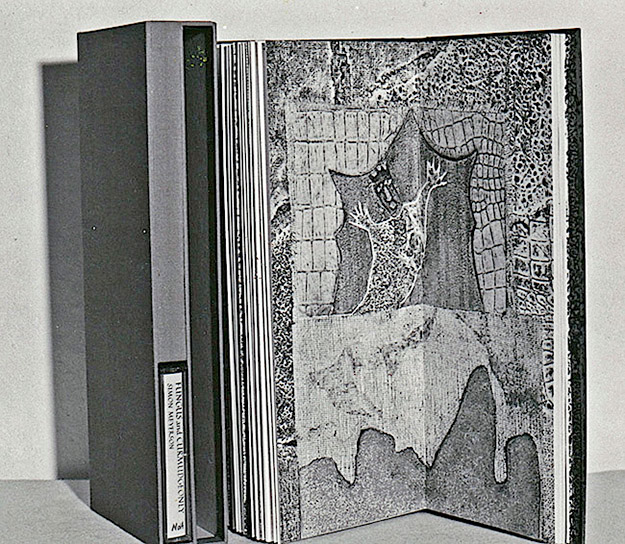 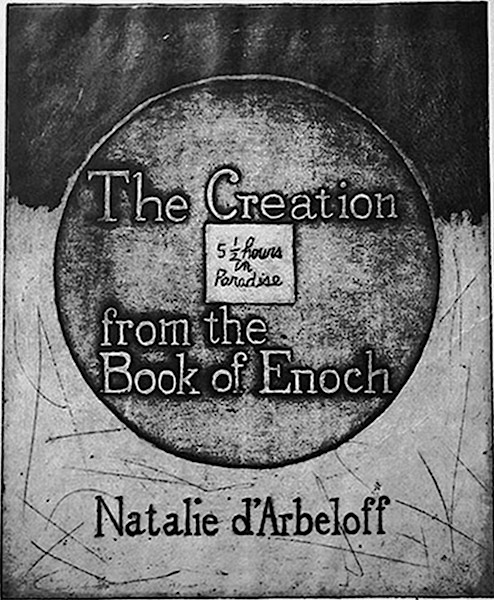 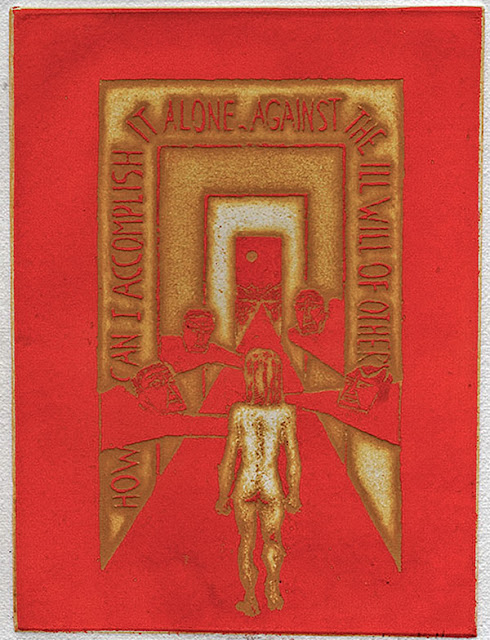 IS THIS A POEM?


Sitting in Archway café
small Americano
milk on the side.
Young blonde mum
tête-a-tête with
young blond baby.
Baby's liitle face
turns to observe
the room
takes it all in
takes it all in.
Wahwah soundtrack blaring
blurring my eyes and ears.
Behind the counter
keep-fit manager explains
boxing moves to bored
Brazilian barista.
Baby takes it all in. 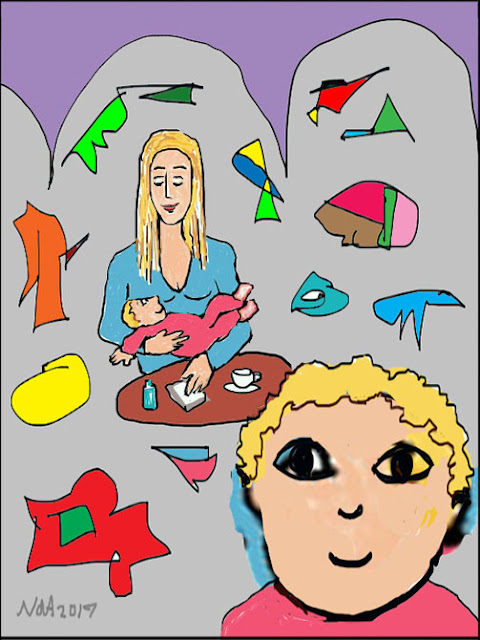 I posted this link to my Facebook page a few days ago in reply to someone's comment about Jeremy Corbyn's alleged anti-semitism. I want to post it again here for the sake of accuracy of information.

If anyone sees Corbyn as a messiah I'm definitely not among them. But every individual, whether public or private, deserves to be judged on the actual facts of their life and their actions rather than on smears, mis-representations and downright lies.

One doesn't have to agree with a person's political, social, religious or aesthetic stance but disagreement doesn't justify spreading or taking for granted certain assumed "facts" about them without bothering to investigate whether they are facts at all.
Posted by Natalie d'Arbeloff at 12:01 am 4 comments:

What is so wonderfully encouraging about the result of this election is that even a relentless campaign by all the powerful mainstream media as well as by individuals in all parties, including his own, to undermine Corbyn in every possible way did not succeed - on the contrary, it backfired and brought him new supporters.

What's more, it demonstrates that a politician doesn't have to insult opponents, flash charisma or spout robotic slogans in order to be a credible leader. No, Corbyn is not Prime Minister but even those who were scoffing, snorting, huffing and puffing at the very thought of it are now saying it's possible and filling column inches with reversals of what they were asserting so confidently only a little while ago.

Here is a summing-up of this election with the inimitable humour of John Crace.
Posted by Natalie d'Arbeloff at 6:34 pm No comments:

Stayed up until 4:30am and am back up again now to check the latest. Have to say that there was some compassion in my heart for Mrs. May when I heard the break in her voice and guessed the tears behind her heavily made-up eyes.

I hope she leaves but I'll wave goodbye and give her a piece of my rye bread & butter pudding.

To Jeremy Corbyn, however, champagne, strawberries & cream and a hug.

More here.
Posted by Natalie d'Arbeloff at 2:33 pm No comments:

Further to the Would you push the button? question:

Herewith  some facts for anyone who believes the Push-Button Principle makes sense, spending billions renewing Trident makes sense, and all other nuclear "deterrent" politics make sense.

And here.
Posted by Natalie d'Arbeloff at 3:13 am No comments:

Would you press the nuclear button?

If you answered YES to the above question, here's a quiz.
Are you:

a) Insane?
b) A criminal?
c) Ideally suited to be a world leader?
Posted by Natalie d'Arbeloff at 8:37 pm 4 comments:

Won't sling the mud
at Amber Rudd
mud-slinger I am not
and tho' Paul Nuttall
needs rebuttall
my wit is not so hot.
But when Spring is spoilt by one false May
on Spring's behalf I cry Nay! Nay!
Let Spring be sprung
and bells be rung
on the eighth of June
a whole new tune! 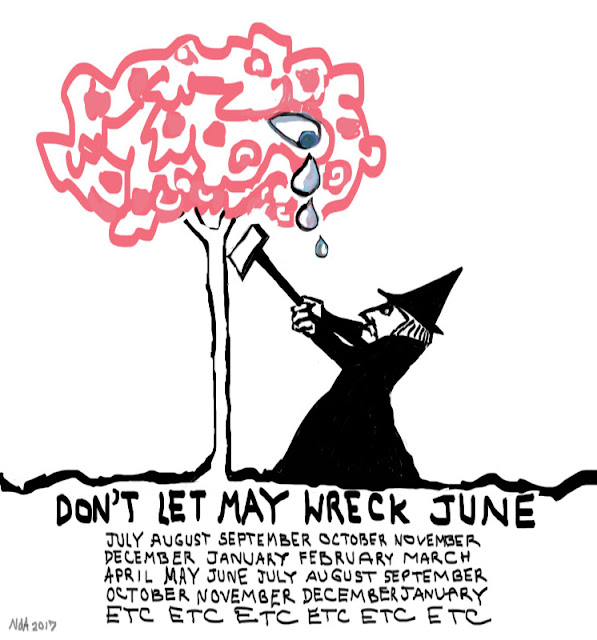 THE LADY'S NOT FOR TURNING UP

Mrs. May was doing something called "going up and down the country" instead of taking her place at the crucial election debate in Cambridge.

Watched on BBC every minute of the debate. My conclusion is that it is now very possible if not probable that the Conservatives will lose. Apart from Ukip's absurd Nuttall, the rest of them all did so much better than Amber Rudd (standing there in lieu of Mrs. May)  that a coalition of Green, Lib Dem, SNP, Plaid Cymru and Labour actually looks pretty good. In my view, Green Caroline Lucas was the most convincing of all but I'll still vote for Jeremy.
Posted by Natalie d'Arbeloff at 5:11 pm No comments: