MAY and CORBYN face PAXMAN

May and Corbyn in the ring with Paxman: who won?
No contest. Corbyn is the winner.
Who's unelectable now, eh? 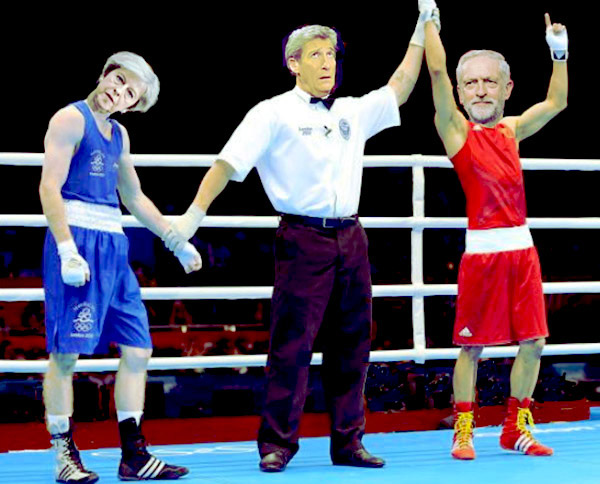 Posted by Natalie d'Arbeloff at 1:32 am No comments:

COMIN' THROUGH THE RYE...

You may well ask: what is that mess pictured below? It is a mess intended to be bread and butter pudding....RYE bread & butter pud with real rye bread, black and solid and made by hand in a small real bakery around the corner. A heavy rye loaf that weighs as much as a brick and if you had a shed-load of those rye bricks you could build a shed that would keep you warm through a nuclear winter and hot through a nuclear summer and if you got hungry you could chisel off a few slices and the walls would remain as thick as thieves trapped in an English lift or an American elevator


I didn't want to waste the left-over half loaf of this indigestible rye bread so I googled recipes and landed on one that seemed plausible though vague about quantities. What, for example, is 3550 of whole milk? So I vaguely followed instructions, reduced the milk, increased the alcohol (vodka-soaked raisins, splashes of vodka, splashes of sherry), added condensed milk, maple syrup, demerara sugar, more raisins, and 4 beaten eggs. Four eggs! I've never added four eggs to anything! Shoved the whole thing in the oven for an hour and this is what came out.

What does it taste like? Like sweet solid soggy rye soaked in alcohol. It's not entirely bad but not actually good. Ice cream on top helps. I can't give it to cats or dogs or birds for fear of turning them into alcoholics. 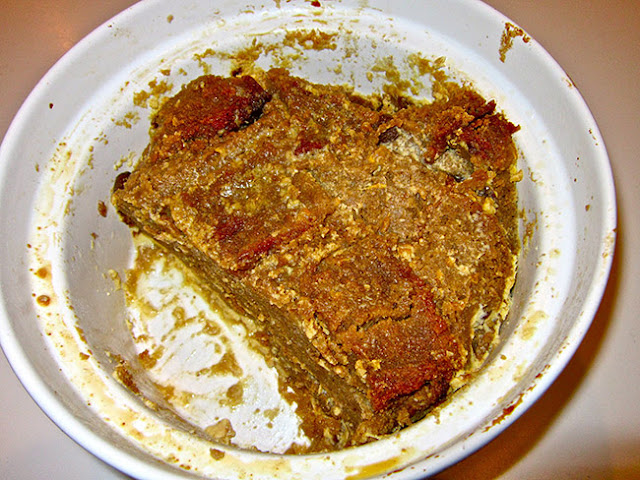 Posted by Natalie d'Arbeloff at 3:38 am 2 comments:

(This has nothing to do with the cat. He was just there.)

Sometimes I am amazed at my own ingenuity. I was repairing the latch on downstairs neighbour's front garden gate which was no longer closing as it should due to...well, probably due to the ground moving because of traffic or tree roots or something. Anyway I noticed that the gap could be filled with a block of wood. Easy to find among all the bits and pieces I save for my own constructions. Sawed and glued two blocks together, drilled some holes, but then, problem:


Couldn't see where a hole should go on the lower half (too complicated to explain this). Scratched head for a while. Ingenius answer popped up: lipstick! Of course! Ran upstairs to fetch item, slathered red goo on face of old hole, pushed the wood tight against it and presto! imprint of hole marked clearly on wood showing where to drill. Job done. 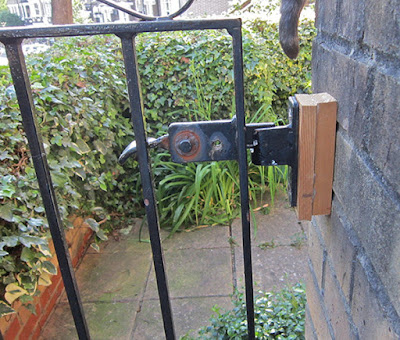 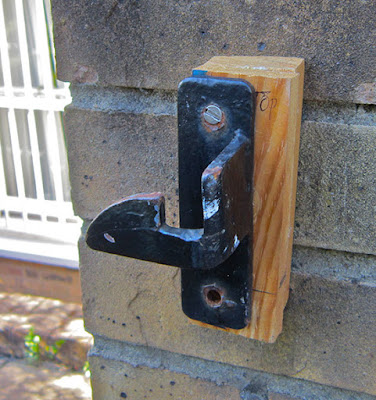 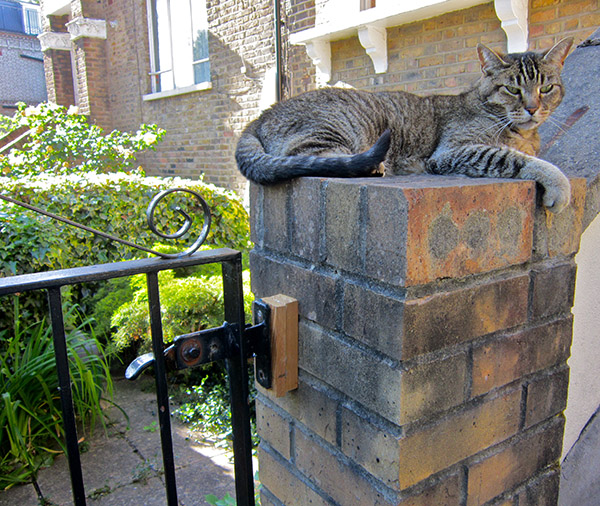 A little while ago George Szirtes posted photos of his grandfather and of himself in a hat and I was reminded of my father in this hat - not the same one of course - the kind of hat that men used to wear all the time, everywhere. When did this change? Why? I loved that hat, the look it gave to men's faces, rakish, serious, a bit louche, melancholy.

My father, Sacha, seemed to have this hat on most of the time, either leaving or returning from a trip. Here he is at three stages: in his fifties in Florence, in his sixties in Switzerland, in his nineties in London. 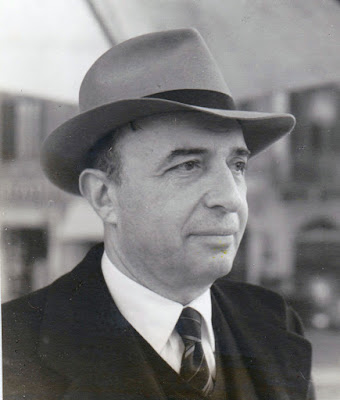 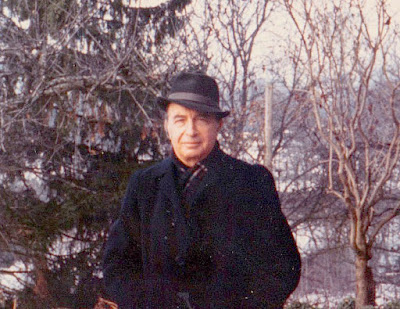 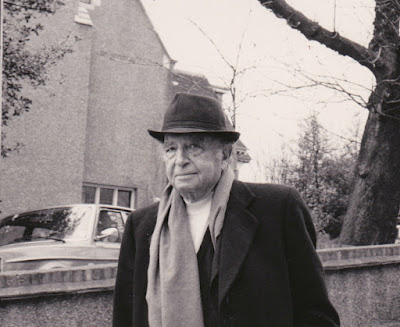 Posted by Natalie d'Arbeloff at 3:22 am 5 comments:

If you have a dear friend, mature and single and wonderful, who is searching for someone (as yet un-met) who is also searching for a committed relationship with a mature and single wonderful person of the opposite sex, would you feel it was okay for you to play the role of...Matchmaker? Is such a go-between role legitimate, acceptable in the 21st century?
Posted by Natalie d'Arbeloff at 3:12 am 2 comments:

My first short visit to Tavira in the Algarve, Portugal, was in 2009 after my brother moved there. The town and surroundings enchanted me and I applied for an artist residency, got it in due course, and went back for three months in 2010 (photos and blog posts of that time duly archived). Last week I was there again, spending time with my brother and becoming acquainted with the small and beautiful art/craft shop which he, with a friend, opened a few weeks ago.

Tavira is a small and unspoilt jewel in the Algarve which I'm reluctant to praise too much.  A festival was taking place during the few days I spent there this time featuring folk dancers in traditional costume and a long row of stands under peaked white tents selling regional produce and handmade goods. 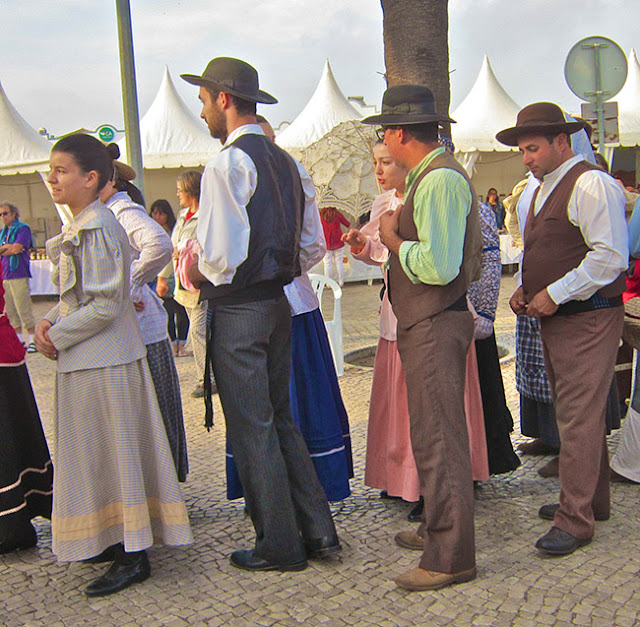 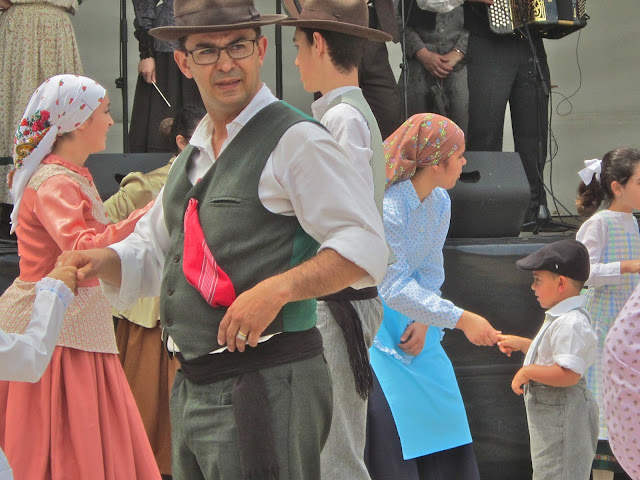 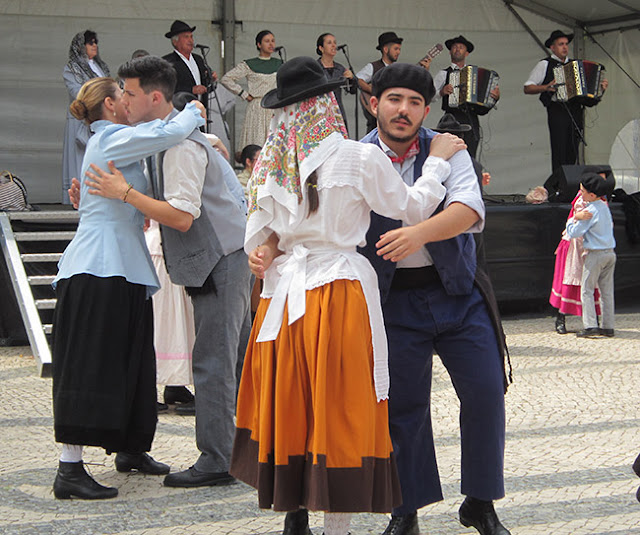 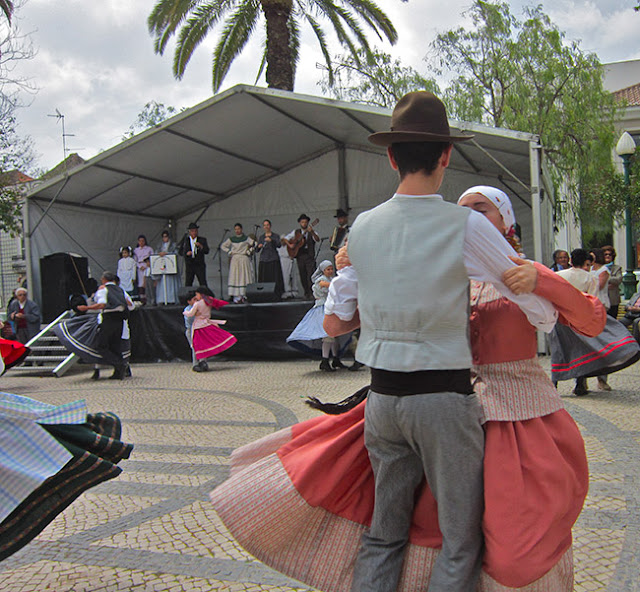 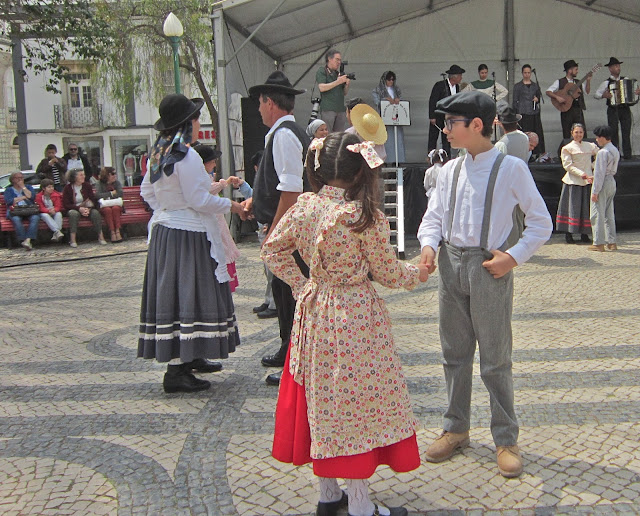 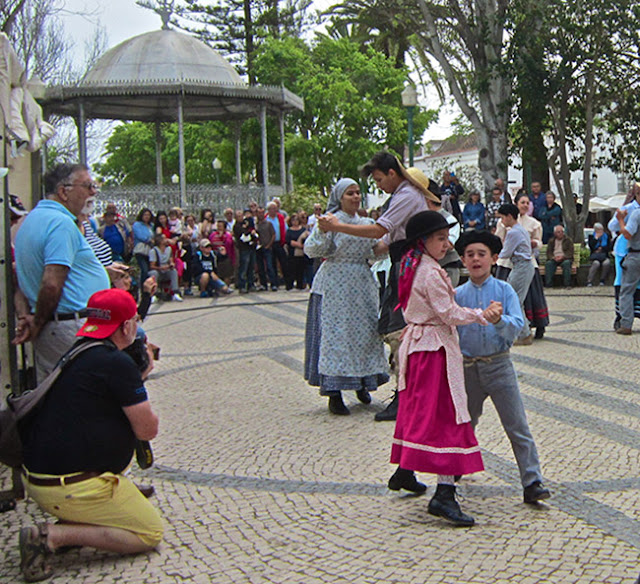 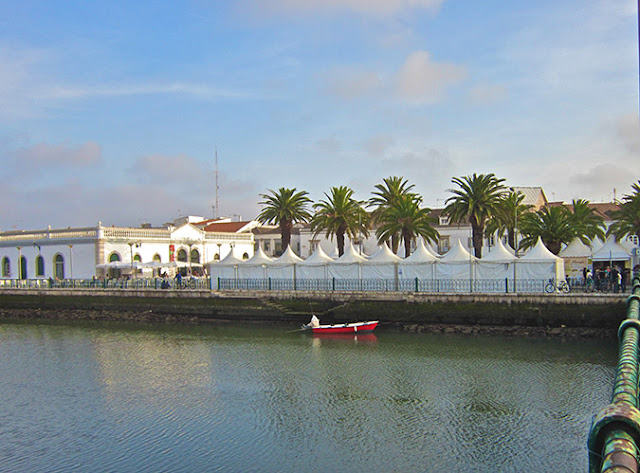 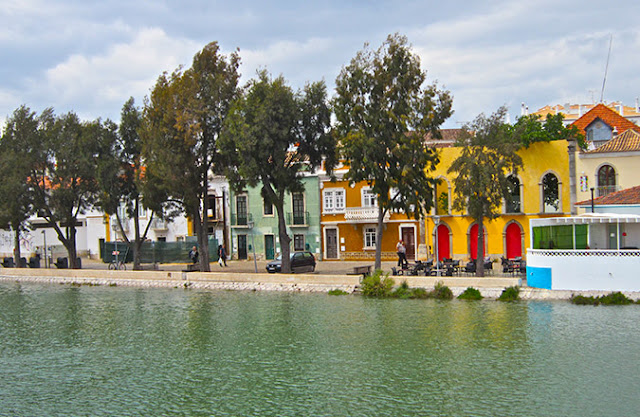 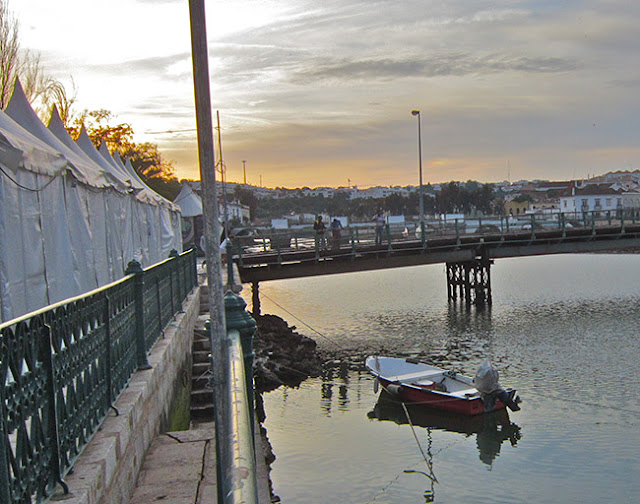 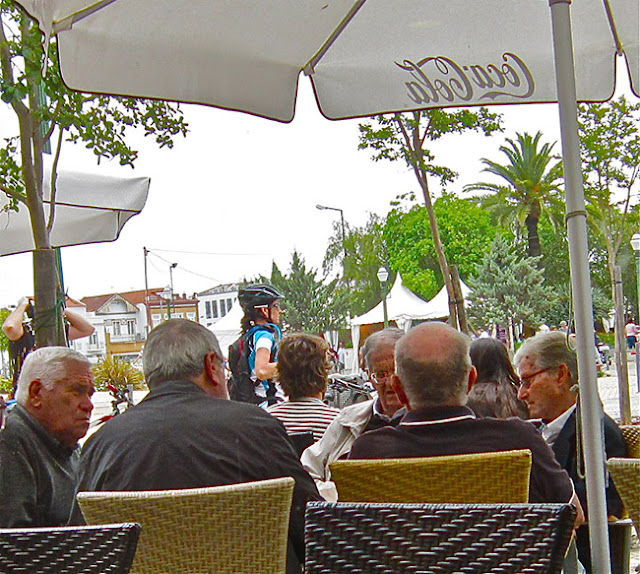 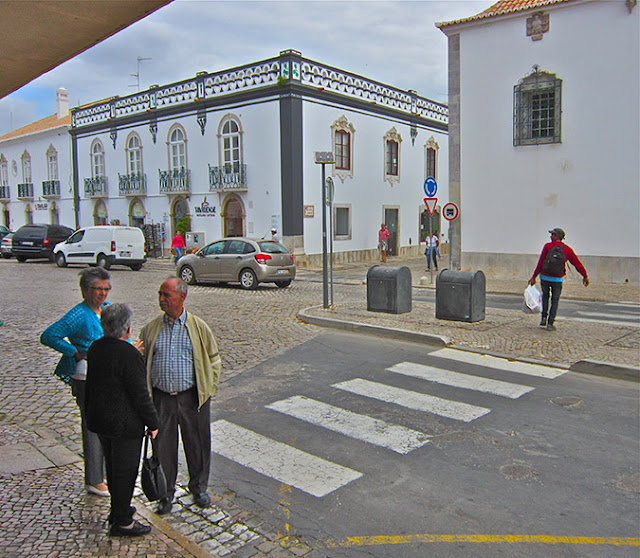