Augustine is my cartoon alter ego and the blog was supposed to be her space. However, I seem to have taken it over.

Go to the blog if you want the full story:

Where do I stand in the religion debate? It's easier to say where I don't stand.

If you've seen my God Interviews you've guessed that I'm a believer. But what does this mean, believer? Do I worship a balding cartoon character wearing a white t-shirt stamped "God"? Do I use humour to avoid the whole tricky issue? Maybe. I know that I believe in God and I know that this belief is not wishful thinking. I don't know why I know this. For me, 'Bible' and 'God' are not synonymous. Maybe 'religion' and 'God' are not synonymous either. I don't know whether the God I believe in features in the Bible or the Koran or the Torah or any other sacred book but none of them can either strengthen or weaken my belief. The faith I have seems not to depend on any of those traditions, including the fringe ones, which claim to have the last word on Divinity.

To celebrate this weekend, here is something I see as wholly holy inspiration. I had never heard of Donald Pass and luckily found him via a Google search for 'resurrection'. 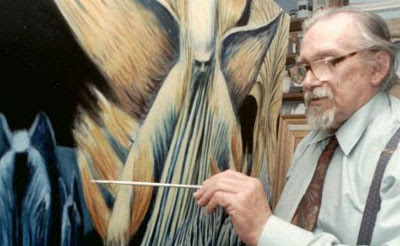 I am very impressed by his work and have no doubt he did experience what he relates here and in this video. You can see Blake and El Greco as influences but I think it may be that they shared similar mystical experiences rather than artistic styles. More paintings by Pass are here. 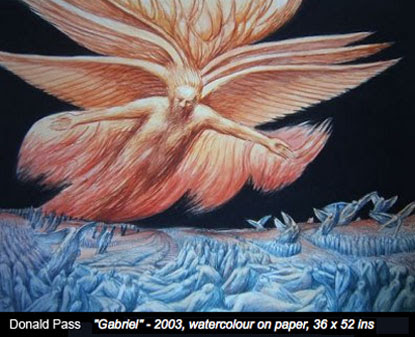 Posted by Natalie d'Arbeloff at 7:41 pm No comments: