THIS WILL BE LONG AND RAMBLING: back from Matera and Grottole 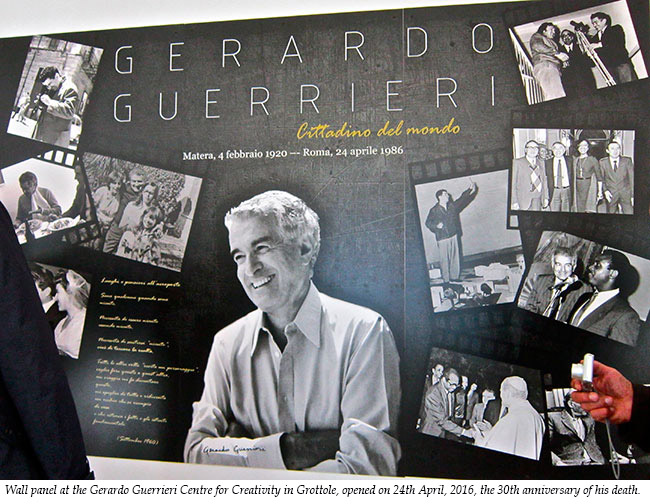 Gerardo Guerrieri was a master at expressing complex ideas, emotions and observations in lucid, direct language but, unlike many Italian intellectuals, he was not a great talker, least of all about himself. His forte was writing. And listening. The way that Gerardo listened was an art in itself, a creative process. Every person he encountered was, for him, a book waiting to be read. When Gerardo listened he was not being sociable, polite or intent on impressing you. At that moment you (whoever ‘you’ happened to be) became his teacher and he. your passionately curious and intelligent pupil, eager to absorb sparks from your experience, your mode of thinking, sparks that he would later connect to other sparks, in his daily life, in literature, science, art, philosophy and much more, forming a constellation, a moving galaxy of which he was not the designer but a fascinated recorder and interpreter.

Gerardo and I immediately became friends, as well as family, when he married my sister in Florence and over the years we exchanged a great many letters from various countries and throughout various  stages in our respective lives. Below I've roughly translated excerpts from a letter he wrote to me during the 1960s or 1970s. I've chosen this particular  letter because it is so relevant to my own current thoughts and feelings. 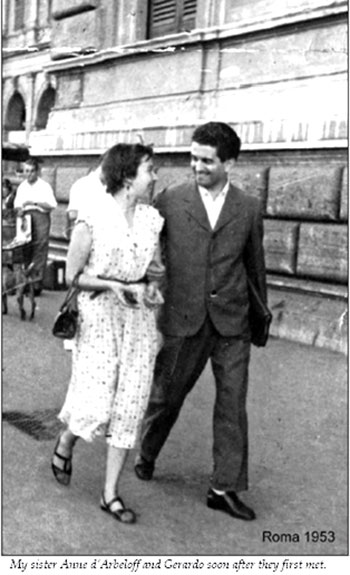 Translation note: the fact that affection can be injected into otherwise neutral words by giving them diminutives fills me with joy - maybe because I haven't a single drop of Anglo-Saxon blood. In Italian, Spanish, Portuguese, French, Russian, it’s only natural to give some words that extra boost whenever they require it. But how to translate this habit into English?  “little sister-in-law” for “cognatina” is as inadequate as “a little coffee”  would be for “um cafezinho” in Portuguese. I'm not going to try.

Dear cognatina -  to continue the conversation.
You ask me to talk about myself - fair enough, but I have to think about it. It will come. For the moment I’m wondering what I should focus on for the next ten years.

I’ve dedicated a great deal of time to technique: now I must dedicate some time to educating myself. In spite of all the experiences I’ve had, it seems to me that I don’t have even the tiniest bit of experience: I feel that I was born yesterday. Of course I’ve lost interest in many things which used to enrage or excite me, things for which I would fight.

I think that one should know the world as one’s self and that knowledge of the world comes through being attentive to this interaction. But I can’t stand those mandarin writers and artists who wallow in navel-gazing - perhaps I’m wrong because, after all, we can’t know anything except through our own perceptions. However it has to be said that some forms of self-idolatry invariably end up being interpretations of absolutely everything through a distorting mirror of self.

Little by little I’ve become detached from my directorial ambitions because they were never truly mine: I can no longer allow myself the luxury of doing something which is not sincerely mine. I need to concentrate on that which was hidden beneath a preoccupation with technique: very often it was this preoccupation which stopped me from doing what I really felt. And, often I simply didn’t know what I should be doing. To quote a phrase of yours, I rarely knew what was “imprinted in my being”. I must always work on this, search for it.

I think I will never tire of learning too much. I’ve noticed that when vitality is low in me,  I don’t want to know anymore and  I become one of those who can’t conceive of anything beyond the day to day, those grey things which happen day to day. But when vitality is bubbling then I feel that a point in time is about to arrive at an unknown tomorrow and this thought gives me vertigo but is also fascinating, like looking up at a night sky filled with stars. This is the reason that I can’t completely believe in what I’m doing today, right now - because it's against a background of clouds which are flying by and which distract me. It's the background itself which, deep down, is the real fascination of life.  It’s why I can’t believe 100% in human civilization but, still, it moves me, fascinates me by its ingenuity, its vitality, its stubborness. I’m enthralled that this whole story was created by a being who knows it must die. The whole of human history then looks like a dare, a joyous act of defiance. Still,  I can’t take it entirely seriously.  At some point it begins to bore me, just as the theatre began to bore me. What truly attracts me is the background, the off-stage, of which we know so little and of which we are so afraid.

Now you understand why I’d like to know what I should do for the next ten years, something not too far removed from what I should have done earlier. It’s not a question of ambition but of harmony. To write is important, but for me, writing has to help me to live.  If you think about it, there have always been two categories of writers: those who have lived in order to then write; and those who live whilst writing. My road is certainly the first one. To repeat: I’m one who was born totally ignorant, like doubting Thomas. 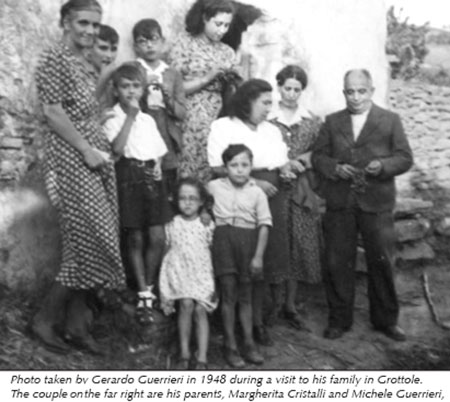 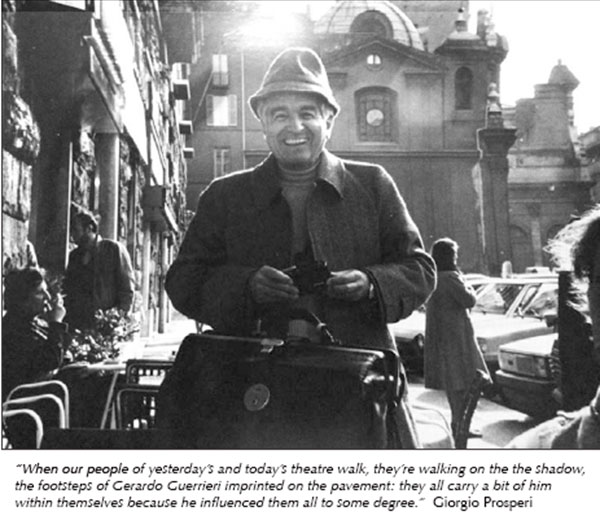 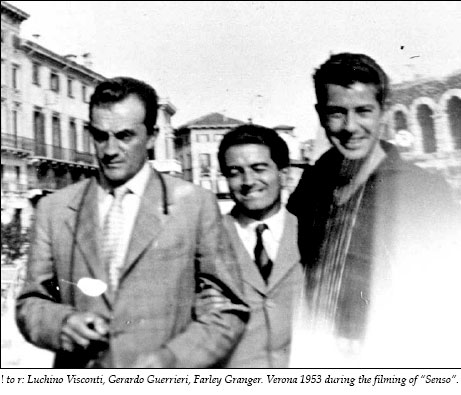 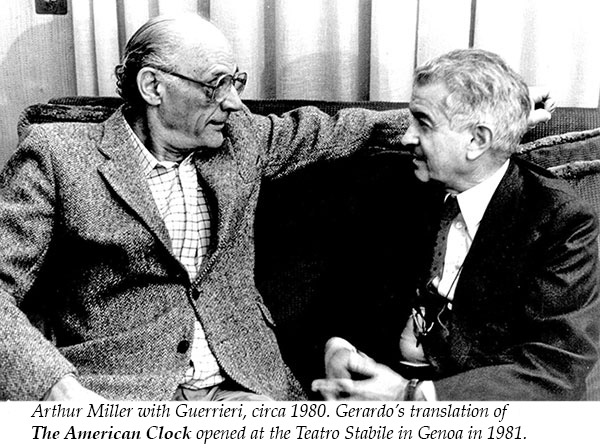 I wish I could do justice to the experience I was fortunate to be a part of: the belated but enthusiastic re-discovery of Gerardo's multi-faceted achievements, thanks to the initiative of individuals in Matera, Grottole and Rome, not least to the tremendous effort made by Selene Guerrieri to complete in time what has turned out to be an invaluable book, meticulously documenting her father's life and work via letters, photographs, bibliography, statements from many of those who worked with him, as well as  recapitulating  the extraordinary undertaking that was the Teatro Club, created in Rome by my sister Anne in 1957, developed and expanded internationally together with Gerardo into the mid-1980s. To quote from a chapter The Adventure of the Teatro Club by Paola Columba, author and director, who curated the Teatro Club Archive at the Biblioteca Baldini (my translation):

".. it had a fundamental importance in the panorama of Italian theatre...bringing a breath of fresh air into what was a closed provincial ambiance...internationalizing the Italian theatrical scene and introducing audiences of all ages and social backgrounds to radical innovations such as the Living Theater, Peter Brook, Tadeusz Kantor, Café La Mama, Merce Cunningham...as well as Indian and Japanese theatre...But the Teatro Club's activity was not focused exclusively on theatre...conferences, workshops, debates, film projections, exhibitions... a multicultural undertaking.... In his notes a year before the Teatro Club's foundation ....Gerardo Guerrieri talked of creating a dialogue between cinema and theatre, between theatre and literature, "between the arts in general, to break the ice of exclusivity and specialization which is ignorance". 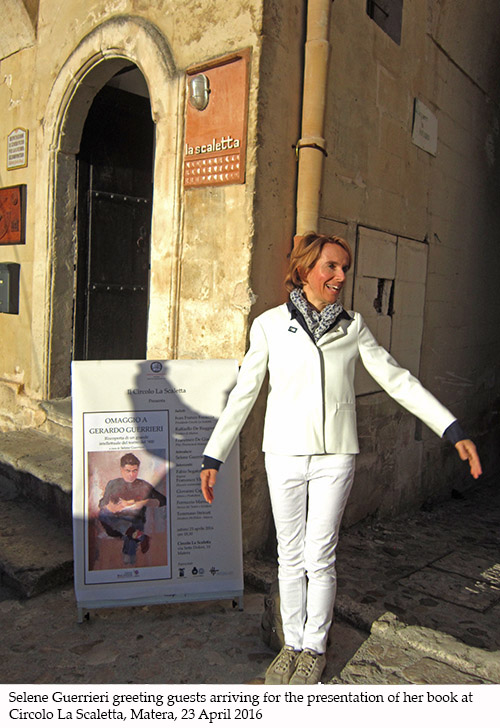 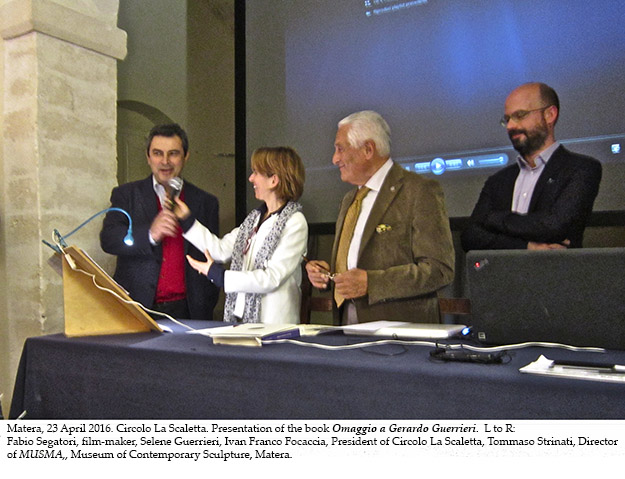 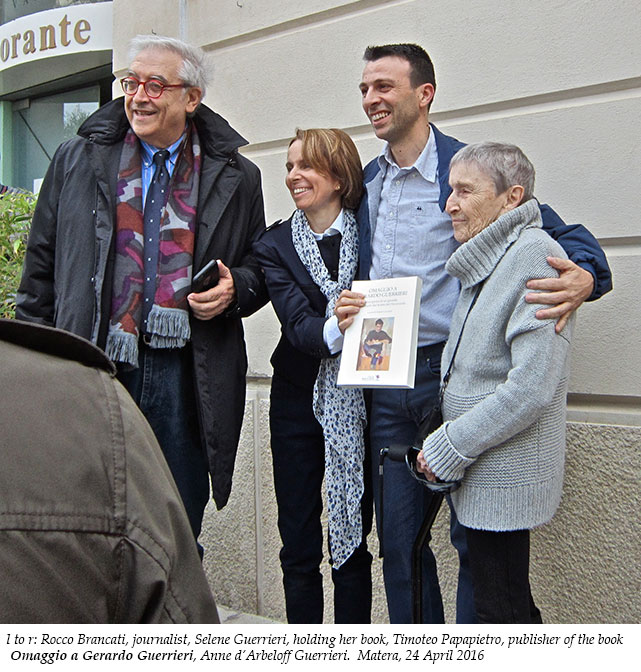 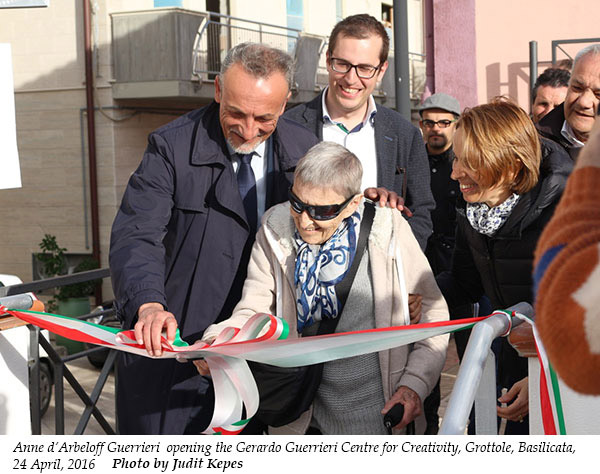 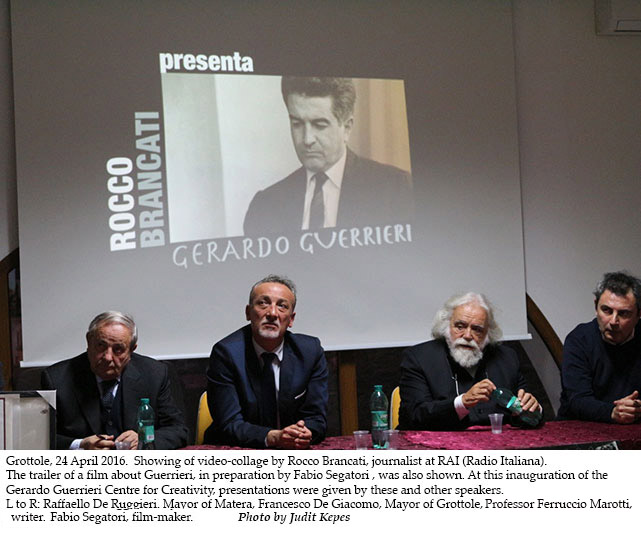 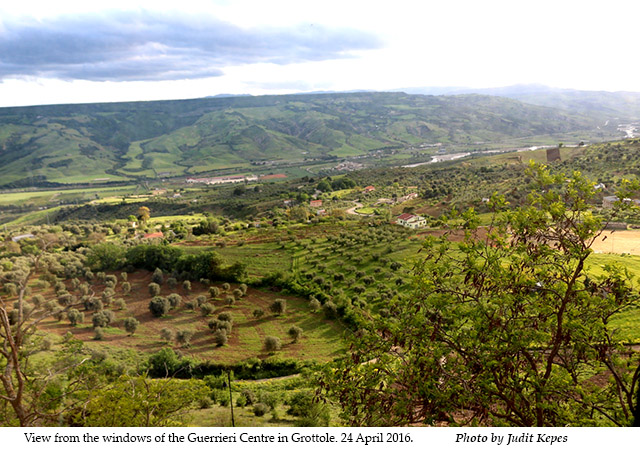 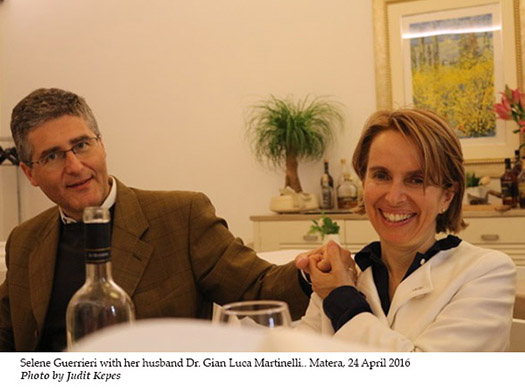 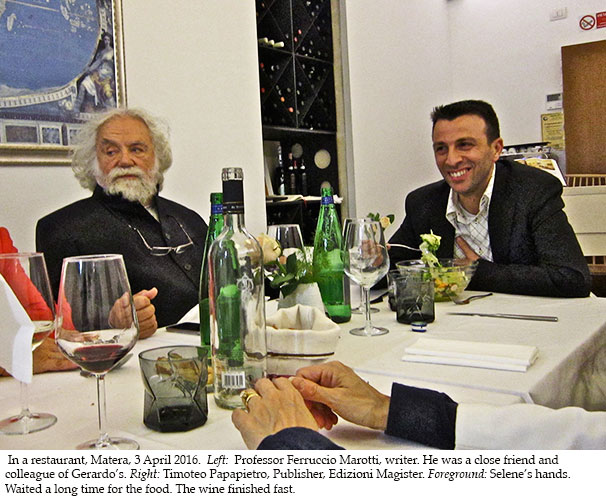 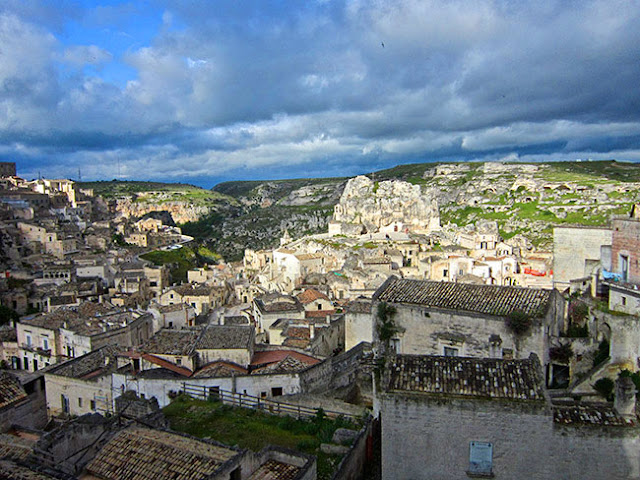 Sunlight on the Sassi, Matera.

I am totally incapable of writing a detailed report of this journey - there was just too much to absorb in three very full days. I hope I've conveyed at least the flavour of it. Matera, Grottole and the entire region of Basilicata are fascinating visually, historically, geographically, human-ly.  I strongly recommend looking it up on the internet and, better still, going there. I will surely return one day. The people and the place make it impossible not to return.

I'll end with these  notes by Gerardo which are printed on the large panel permanently affixed to a wall in the Grottole centre dedicated to him: 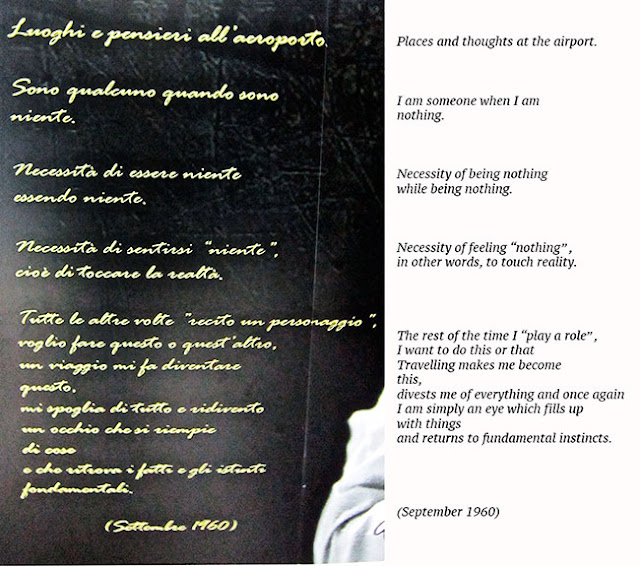 Posted by Natalie d'Arbeloff at 7:02 am 5 comments:

Yesterday was my 13th year blogday but there's so much else to celebrate that this is incidental. The Matera/Grottole experience was fantastic, I'm just trying to put my thoughts and impressions in some kind of order then I'll post them here and on the Blaug.
Posted by Natalie d'Arbeloff at 12:16 pm 4 comments:

Early tomorrow morning I'm off to Matera in Southern Italy for various events in honour of my late brother-in-law Gerardo Guerrieri who died on 24th April thirty years ago. His biography, edited by my niece Selene Guerrieri, will be launched and a cultural centre in his name will be opened in nearby Grottole where he is buried.

I'll be writing about all of this when I get back home in a couple of days. For now, here's a 1965 article in English about Gerardo's work as translator, a photo of the plaque which the city of Matera, his birthplace, will be dedicating, and a photo of Gerardo in a garden, probably in the mid-1970s. 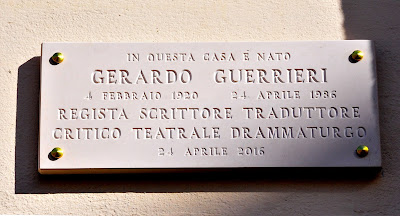 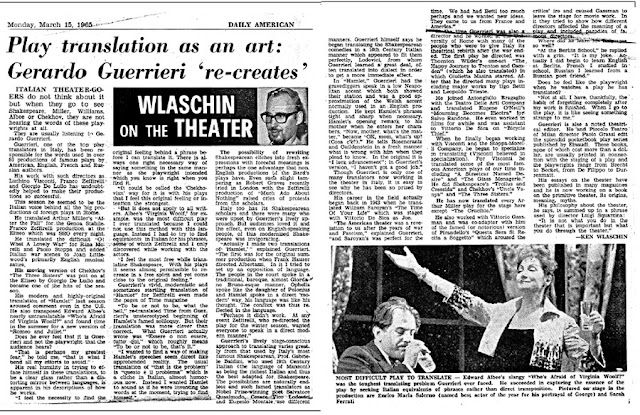 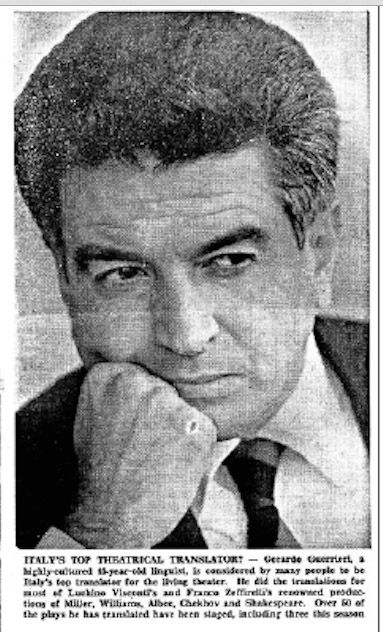 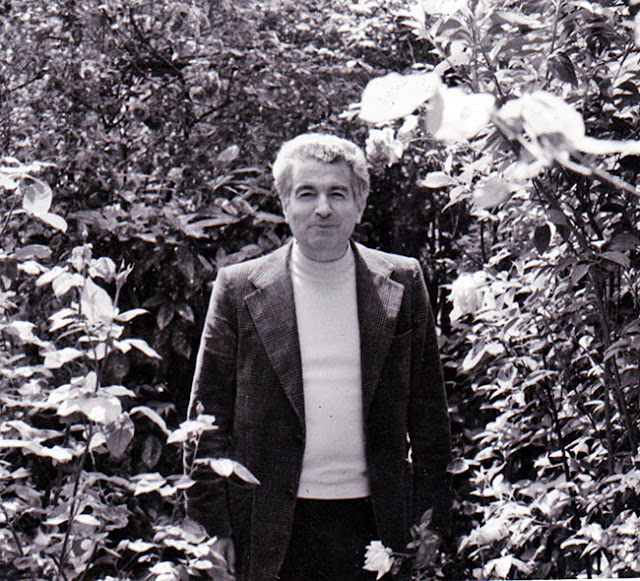 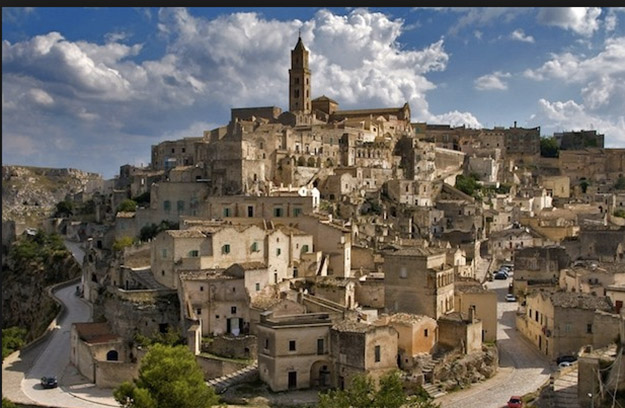 Bad idea to start looking through old photos when you should be doing something else but it's a great distraction. One thing links to another in a satisfying manner.

For instance this photo, from the same period as the ones in the last post - perhaps even taken by Gerardo Guerrieri (he was always observing, photographing and/or recording everything). I don't remember what I was painting when this picture was taken but it must have been a portrait, judging by the gaze focused on someone....maybe my sister? 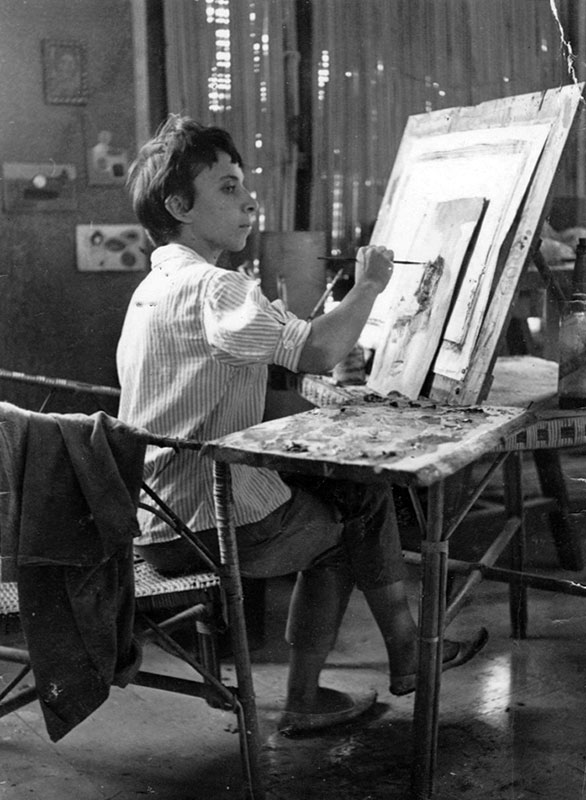 P.S. to the last post: here are the duet of  paintings I did of Gerardo and of Annie, my sister, and a photo taken at the time, when they came to visit me and my then husband Reg Dixon in San Antonio, Paraguay. 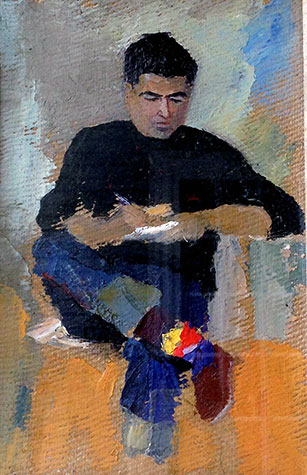 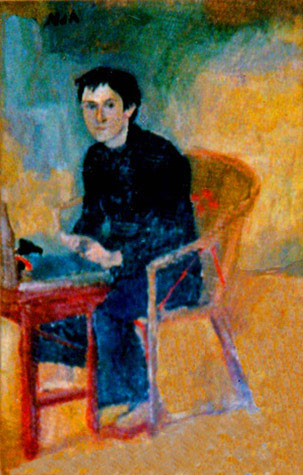 In the photo below, left to right: Gerardo Guerrieri, a friend, Annie, Reg, me, and a dog whose name I don't recall, just about to scratch himself. 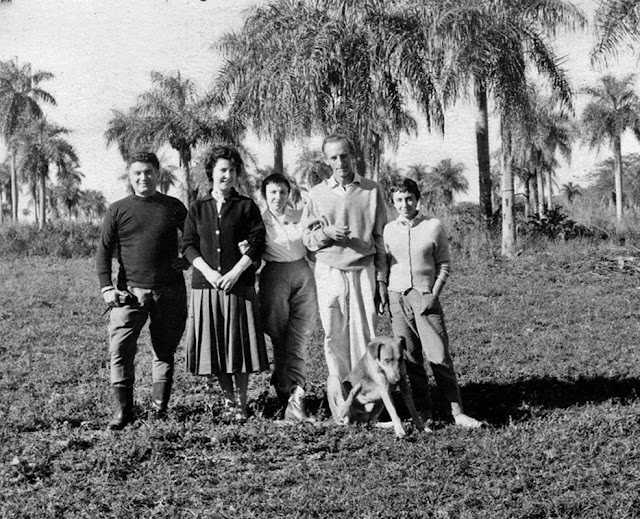 Posted by Natalie d'Arbeloff at 12:09 am No comments:

I'll be posting soon in detail about the brilliant book which Selene Guerrieri, my niece has just completed on her late father, my brother-in-law Gerardo Guerrieri. It is being published in Matera and will be launched on the occasion of the opening of the Casa della Cultura in Grottole, which is dedicated to Gerardo, as I mentioned here and on Facebook a while back. I'll be going to Matera and to this event in Grottole on 24th April for a few days and will take photos and video.

For the moment, I'm totally taken up with work in preparation for an exhibition of my work, entitled My Life Unfolds, at bookartbookshop in Hoxton, London, opening on 12th May (advance notice will, of course, appear here). Meanwhile, for those who read Italian, here's the cover of the book. The painting of Gerardo on the cover was painted a long time ago by yrs. truly. 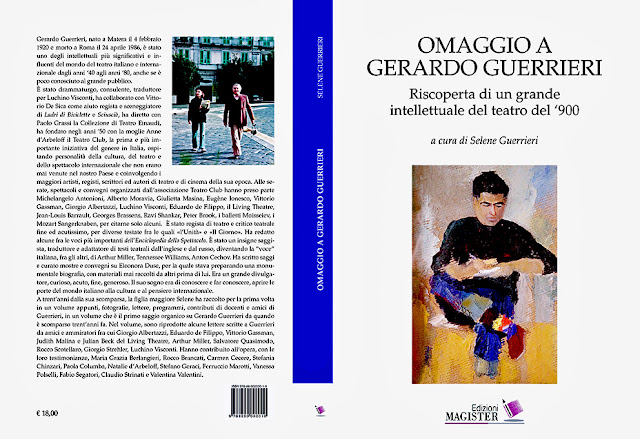