VOICES CRYING IN THE WILDERNESS

It's important to make our voices heard if there's any chance of stemming the tide of xenophobia, fear, ignorance, indifference and selfishness which is creeping, seeping into the fabric of our society, not only here but in many other so-called democratic, so-called enlightened, caring societies.

Below I'm copying a letter from George Szirtes (posted on Facebook) to his Members of Parliament:


OPEN LETTER TO MY LOCAL MPs, RICHARD BACON AND GEORGE FREEMAN, WHO VOTED AGAINST ADMITTING 3,000 UNACCOMPANIED CHILDREN TO THE UK

I see your name is among those who voted to turn away 3,000 unaccompanied children. I myself came here as a child refugee in 1956 and met a far kinder world than the one you represent. I am well aware that nothing I say will make the least difference to your views, but I want to register my distaste not just at this particular action but at the hostile mood your party has created for all foreigners. I have been a citizen of this country since 1964 but consider myself a citizen of the world, that is to say of humanity too, which, in the judgment of the prime minister - your prime minister - makes me a citizen of nowhere. Nowhere is where you have left so many of us: doctors, nurses, public service employees, students, even widows who have lived here for decades but have recently been asked when they are going home.

Is the condition of what you consider 'proper' UK citizens likely to be any better for either this decision or the rhetoric your party has embarked on? Are the lives of those at the bottom end of the scale, the unemployed, the disabled, the dependent, likely to improve from the condition your government has reduced them to, as a result of this refusal?

If you believe it will improve the conditions of those born in this country, those, that is, who have benefitted from the work of people born elsewhere, people who have given long years of their lives to this country, people who paid their taxes and contributed their skill and labour where it was wanted and still is wanted, if you believe that their changed conditions are going to be any better for the rejection of 3,000 unattached children, please explain to me in what way.

I look forward to your kind and considered answer.
GS
Posted by Natalie d'Arbeloff at 2:20 pm 17 comments:

IS THE INTERNET YOUR PARENT?

These questions ocurred to me today while on the bus to Camden Town.

Is posting on the internet our thoughts, our pictures, our stories, our rants, our activities, then eagerly, hungrily, checking for responses, is it a bit like being a child again, seeking parental approval or if not approval, any kind of response? Are all internet social media like metaphorical parents of whatever sort of child we were (and still are to some degree)?

For my part I can answer a hesitant yes. Does anybody else reading this feel the same?

I cross-post to Facebook and some people have replied over there.
Posted by Natalie d'Arbeloff at 7:36 pm 17 comments:

Same period of time (1962), same place. The reason why Reg and I are in Rome is only because my sister Anne and her Italian husband, the writer Gerardo Guerrieri, said  'Come! You can work with us.' when we were wondering what was next after our years in Paraguay ended (more about all of it in my ongoing online autobiography).

So we're both working in the office of the Teatro Club, an extraordinary organisation created by Anne and Gerardo which brings international theatre, dance, music - myriad roads really leading to Rome. I'm designing posters for a forthcoming show by the Moisseiev Russian ballet company but meanwhile, Odetta is about to give a solo performance and I'm helping out backstage.


Odetta, whose unforgettable voice I've never heard before and whose majestic presence overwhelms me, is standing calm and serene before her curtain call while I'm running around panicking in case I've forgotten something and catastrophe is imminent.

Odetta, the Odetta, turns to me smiling like a Buddha and says something...why why why why can't I remember her actual words?...something which means don't sweat the small stuff, but so much more eloquently, and in that voice, with that presence, so calm, it's like a shower of blessings and all my panic melts away and all the panics melt away and you have to laugh.

She goes on stage and she sings her songs and now, all I have to do is to put her records on and I'm back in that moment. If you've never heard Odetta, or even if you have, listen to her. This is from one of her blues albums:
https://www.youtube.com/watch?v=iDWxl5Z0bbI 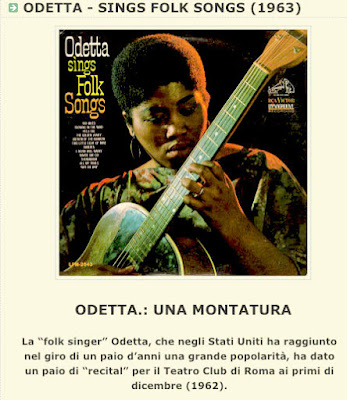 Posted by Natalie d'Arbeloff at 3:18 am 9 comments:

MEMORY THE WIND DIDN'T BLOW AWAY

It's 1962 or 1961. My husband Reg Dixon and I have left Paraguay behind and are living in a rooftop apartment in Trastevere, Rome's left-bank. In the evenings we often drop in at the Folk Studio, a cavernous musical haven for world citizens and restless locals, run by Harold Bradley, a hugely talented African American singer, actor, painter and all-around exceptional human being. His deep velvet basso profundo version of the old Gospel classic God's Gonna Cut You Down can easily persuade you Harold is God (but he'll never cut you down because he loves you too much).

We've made friends with Harold and since Reg plays the guitar and we both sing, sometimes we perform our American, English, French, Spanish or Mexican repertoire. Other amateur and professional musicians often come on stage from the audience and, one winter night, a skinny kid wearing a casquette (you know, those flat caps) gets up there.


To my shame, I cannot remember what or how he sang or even if he had his guitar with him but I know it was good. Reg and I and another man and the kid, who is very very drunk and hilariously funny with it, go round the corner to a bar for some food. The kid's sense of humour is so sharp and so contagious that we are all falling about in blissful hilarity. The kid's name is Bob Dylan. He isn't yet very famous but his manager Al Grossman is with him protectively on that evening in Rome.

I'm absolutely sure that neither Dylan or the late Grossman would remember the incident but herewith my very good wishes to the Nobel prizewinner.

Looking for a photo to include, I came across an astonishingly detailed account by Olof Björner of Dylan's comings and goings, which includes his trip to Rome in 1961 (I'm pretty sure it was actually 1962 but never mind). I've copied the relevant extract below. Also found a photo of Harold Bradley at the Folk Studio around that time. 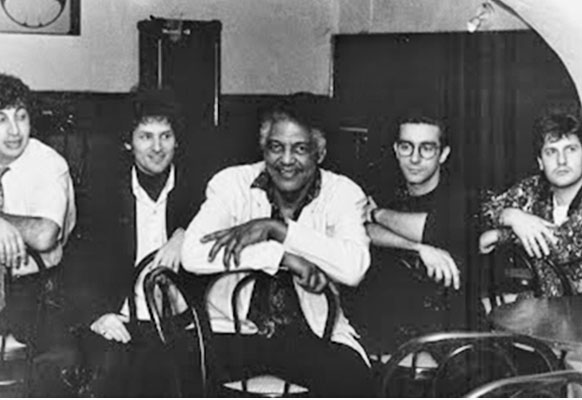 Harold Bradley (centre) at his Folk Studio in Rome in the 1960s
I found the above photo on this website.

Foolishly, I stayed up last night to watch the Trump/Clinton debate - if that word can be applied to the infantile slanging match I witnessed, my jaw dropping so low that I still haven't quite retrieved it.

In 1984, when some of you were still in swaddling clothes (does swaddling still exist?) I won a Guardian competition for political montages and got a bottle of champagne (not Bollinger). Below is my original cartoon and above it is a new version I've just done, simply changing the faces and the context. I rest my case. 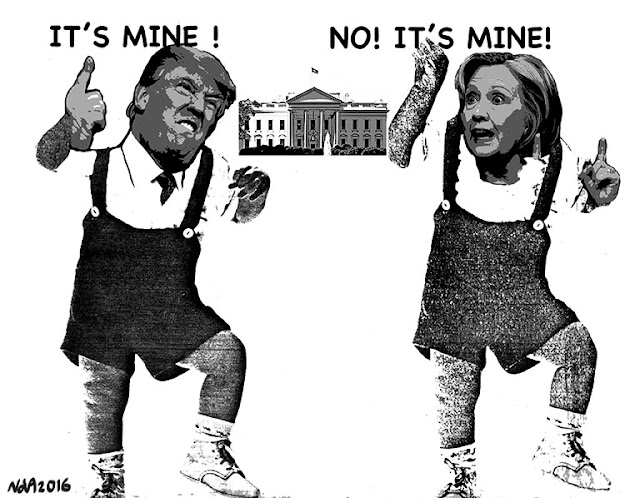 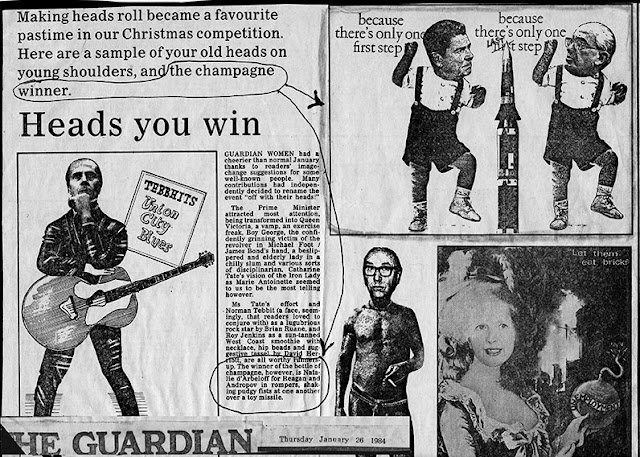