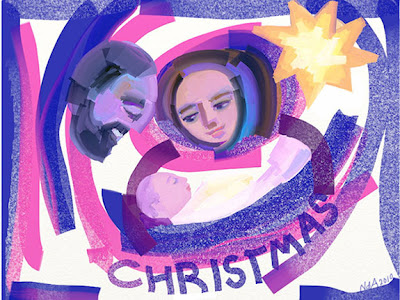 Whether you celebrate this season with different images or with no images at all, my warmest wishes go out to you all and may your spirit be moved by all the beautiful things in the universe, visible and invisible.

Meanwhile, I sent a submission to the latest >LANGUAGE>PLACE CARNIVAL and am very pleased that it's there now (video of my stay in Tavira, Portugal) under the heading Slipping Boundaries, amongst the other wonderful entries on Nicolette Wong's blog Meditations in an Emergency.

I have made a firm resolution to return to La Vie en Rosé  as soon as the New Year kicks in and you have my authorisation to remind of this resolution, loudly and clearly.

MORE
Posted by Natalie d'Arbeloff at 1:32 am No comments:

IT'S THAT TIME OF YEAR

IT'S THAT TIME OF YEAR...
when everything accuses:

The calendar, the weather, the people streaming in and out of shops, the seasonal cards arriving already, the Things To Finish This Year list I made last year and all the lists I've ever made....my whole life suddenly seems like one big end-of-year guilt-ridden apology to myself and others:

No. Not true that I'm sorry. Can't be true. If it were true I wouldn't keep on being late. Lateness must be a state I enjoy. A state I prefer to the state of punctuality, the state of finishing things, the state of satisfaction. Lateness must be what I'm really good at. If I annoy, disappoint or inconvenience others with my lateness, my unfinishedness, that's their problem, isn't it? And if I disappoint, enrage, inconvenience myself that's my problem, isn't it?

Yes. That is my problem.

(I did the drawing below using the wondrous HARMONY application created by Mr.doob, Ricardo Cabello). 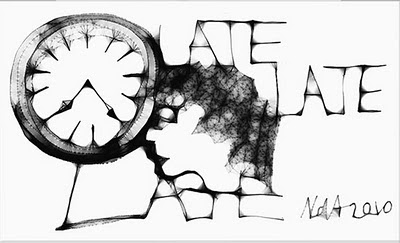 To round off my last post, I must say something about Snow which I have just finished reading. I now have no doubt that the mythological KA or double was present in the author's mind when he worked out the structure of this book. 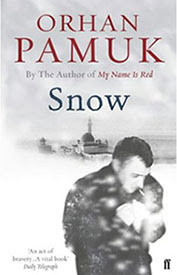 First of all, the fictional narrator 'Orhan' is the double of the real author, Orhan Pamuk. Secondly, Orhan tells the story based on his dead friend Ka's diaries and re-traces Ka's journey, trying to see things as the poet did four years ago. The 'double' theme is taken up again in the close relationship between the two teen-age boys, Necip and Fazil, who read each other's minds. After Necip is shot, Fazil says to Ka: "It's possible that Necip's soul is now living inside my body."

Other instances of doubling, as well as of duplicity, are scattered throughout the story. This is particulary intriguing to me because I was searching for the lesson implied in my dream. I have yet to figure that out but never mind the dream - was I impressed by Snow?

Impressed, yes. It's an impressive achievement. If it was a sculpture, it would be a public monument standing in a town square. A realistic sculpture but with modernist touches, lots of intricately crafted detail and symbols. Was I moved by it? No. Its monumentality, its intention to be an important novel creates a distance like those barriers not letting you get too near valuable works of art in a museum. While I admire Pamuk's grasp of the complex politics and beliefs of his compatriots and the tremendous skill with which he weaves them into a story, he doesn't make me care about individual characters. Apart from being told repeatedly that Ka's love-object, Ipek, is stunningly beautiful, what do I know about her personality? It has less substance than the snowflakes which dominate the setting. I feel the same about the other protagonists (perhaps Necip is the exception). They are all actors on a stage, reading their roles, and once I've left this theatre, I forget them. The other factor which alienates me from this novel is the surfeit of information: too much, too much! Just when my attention is captured by an incident or conversation, I'm immediately pulled away to look at something else, some irrelevant detail. This is infuriating.

Voilà. I'm obviously not going to join the ranks of those who adore Orhan Pamuk's writing but I will, definitely, take my hat off to him.

MORE
Posted by Natalie d'Arbeloff at 11:26 pm No comments: