The reason I've been procrastinating about blogging lately is because of major procrastinatitis about finishing a project I began a while back. All my projects seem to have begun 'a while back' - some time in the Neanderthal period.

Anyway this particular one is to make a video thingy to further explore those faces, my pin-ups, first posted on 23 March . I'm in the middle of working (euphemism for playing around) on it and it should be up soon.

It's a fascinating subject. What subject? Hard to describe exactly. Something to do with a specific arrangement of facial features (male, in this case) which certain individuals have in common, along with astonishingly similar psychological characteristics. It's as if they are from the same tribe, even though in reality they are not related. The other puzzle is what makes this type - or, as I prefer to think of it: this particular assemblage of features - so damned attractive?

Posted by Natalie d'Arbeloff at 3:36 pm No comments:

I have accidentally deleted almost all my images from older Blogger posts.
Not my fault.
It's because Google stores them all on Picasia and I was browsing my albums over there and noticed some I hadn't uploaded so I just deleted them.
Only later did I see the warning that this would mean they'd disappear from my Blogger posts too.
Why do they do this sneaky thing?
Anyway, now I either have to re-insert everything or, if you happen to be browsing my older posts and see blanks where images should be, then please do this:
go to my REAL Blaugustine blog (of which this Blogger one is merely a partial mirror)
and see the corresponding dates where all images will be in their rightful places.

Posted by Natalie d'Arbeloff at 8:42 pm No comments:

This is the sixth post in an online game of Consequences. Each successive entry begins with the closing lines of its predecessor. Entries are 250 words long and are linked thematically. The series started with Hydragenic and was followed by Patteran Pages , Porous Borders, The Middle Westerner , Feathers of Hope and herewith, moi, Blaugustine. The series will continue in a day or two at Small Change.

“We gulp what is here and ours and nobody’s and nothing’s” George said, handing her his glass of rosé.
That’s how he talked. She couldn’t understand him half the time but he was a poet so she had learned not to ask for explanations.
“Guard it with your life,” he added, “I’ll be right back.”

Nothing he says ever means what it sounds like, Susan thought. 'Right back' could mean ten minutes, three hours or even three months. She surveyed the drinks table: two bottles of the local wine, two Perriers, two Evians and fourteen cans of sugary fizzy kid stuff. Their hosts were strictly teetotal and stingy to boot but the isolated expat community never turned down an opportunity to socialise so the room was buzzing with familiar talking heads. Through the window to the garden Susan could see the teetotal host’s teetotally blonde wife in intimate tête a tête with George.

Susan leaned back and tipped the wine down her throat. Three years on the wagon and five years of compliance suddenly vanished as she poured the remains of the first bottle into her husband's glass, drank it, then dispensing with formalities, expertly guided the rosy stream into her mouth straight from the neck of the second bottle .

Oblivious to the guests' shocked stares, Susan stumbled out of the house and down the village street just as Père Lafitte was passing by. She grabbed his arm, shouting:

Posted by Natalie d'Arbeloff at 3:24 am 8 comments:

Yesterday I walked from London Bridge Station and joined the hungry crowds milling around the market in Green Dragon Court overflowing with delectable Jamaican, Turkish, French, Spanish, Italian, Greek, German, English delicacies then along Bankside in the warm sunshine, past the Globe Theatre and down to Taste Modern where surprisingly no one at all was queuing for tickets to the Futurism exhibition. Ended up making my own humble Futurist-ish speedy little movie which you can see below. The soundtrack is mine, made up from loops in Garage Band.

The Futurists themselves did not impress me, apart from their typography, Balla and a few others who were more Cubist than Futurist. So much more attractive when reproduced in coffee-table-size art books, the actual Futurist paintings are mostly dull and formulaic, never achieving the grandiose aims of the infamous Futurist Manifesto of 1909. Leaving aside the manifesto's glorification of war and militarism, its vilification of all art, literature, women and pasta, the paintings completely fail to convey the Futurists' declared exhilaration about modern life. What's the big deal about breaking shapes up into kaleidoscopic jigsaws? Hardly breathtaking or revolutionary. Even Severini's huge Dance of the 'Pan-Pan' at the Monico left me indifferent. Yes, it's clever and pretty and looks like an advert. I'm hard to please, sorry.

Click to Play
A walk through Borough Market and along the Thames to Tate Modern to see the Futurism exhibition on June 13, 2009. Assembling my snippets of video, speeding them up, adding special effects and a soundtrack I composed in Garage Band, here's my own Futurist-ish creation.
Formats available: MPEG4 Video (.mp4)
Tags: futurism, tate modern, london, market, thames, speed, art, painting, millenium bridge
Posted by Natalie d'Arbeloff at 3:54 am 3 comments: 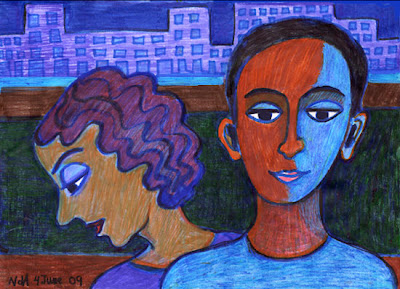 I worked on these with acrylics after the initial fast line drawing with felt pens and added metallic colours, green and gold, but the shine doesn't really scan well. I've also done some digital reworking on them so they probably don't qualify as doodles, lucid or otherwise.

The felt pens encourage spontaneity and a nicely flowing line. Very enjoyable. The washable felts made for kids are no good. They dry up after about five minutes of heavy use, but the permanent markers are fine as long as you can stand the smell. Here are some more of my recent fishing expeditions in the stream of consciousness.

I've also added more bookworks so please go and click on the links you haven't seen before in the blue and red sidebars here .

WHERE DO IMAGES COME FROM? 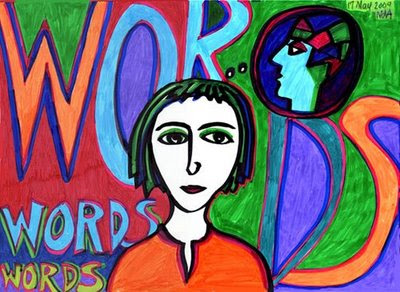 You're looking at a blank sheet of paper with no thought in mind, no desire to draw anything you see or anything you remember, and then you pick up a pen and start drawing. Lines and shapes emerge as your hand moves across the paper and pretty soon there is an image: something that didn't exist before, something that you didn't plan or intend and perhaps don't even understand. What's that all about? Is it like dreaming? Is it lucid dreaming? Lucid doodling?

Whatever you call it, isn't it wonderful and amazing that there really is another way of thinking which is not thinking at all but a kind of blanking? A sort of meditation which squeezes pictures out of you like toothpaste from a tube?

I've been drawing like that recently with felt pens on A3 sheets of paper. Here are two of them. The only digital alterations I've done are to add a black background to the bird of paradise drawing; the original is on white.

Posted by Natalie d'Arbeloff at 3:14 am 2 comments: