EXHIBITION IN CARDIFF COMING UP

STORYLINE, an exhibition organised and curated by Bill Garnett (Pomegranate Fine Art) will be from 9th to 15th November at the Dahl Gallery, in the Norwegian church in Cardiff, in support of Shelter, Cymru.

About 20 prints and some artists' books of mine are included among the terrific artists participating. I'll be at the opening on 9th Nov. Come if you can but even if you can't, the work will be for sale on Pomegranate. BUY and support Shelter, as well as enhance your life with marvellous original artworks. 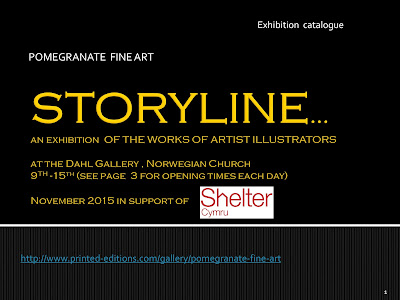 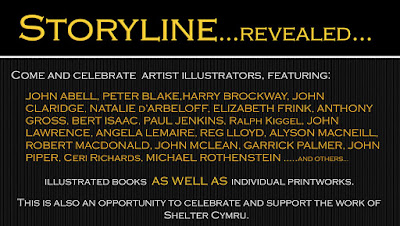 Looks like I can't upload the whole catalogue. Will ask Bill to re-format.
Posted by Natalie d'Arbeloff at 12:43 pm No comments:

Reading Lucy and Tom's vivid and idiosyncratic impressions of their recent trip to the Netherlands I was motivated to look for some sketches I'd done during a trip to Amsterdam in the 1980s. In the same sketchbook there were also many quick drawings of poets, artists and other talking heads at various events I attended during those years.The ideal ambiance for sketching people is at a conference or concert where speakers/performers stay relatively still for long periods and you can be sitting quietly drawing, unobserved and undisturbed while still being part of the scene.

Amsterdam 1986: it was raining, the hotel was cheap and the mattress had lived, as they say. 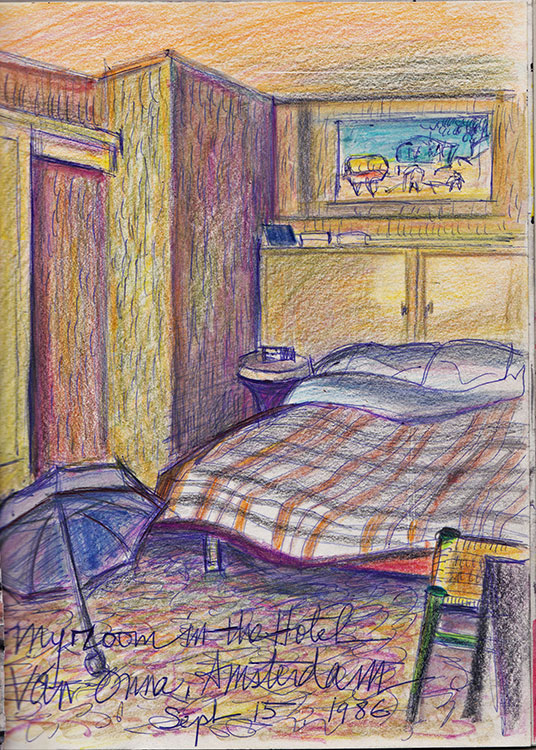 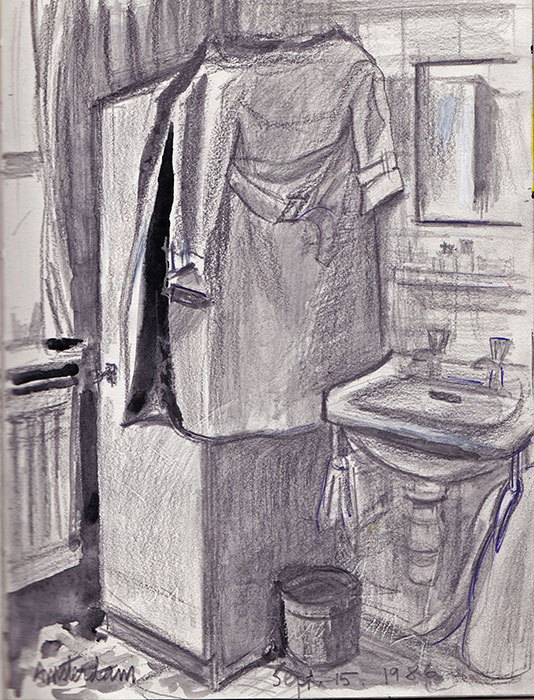 Of course Van Gogh was on my mind. He shared my room and I angled the mirror so as to echo one of his subjects. 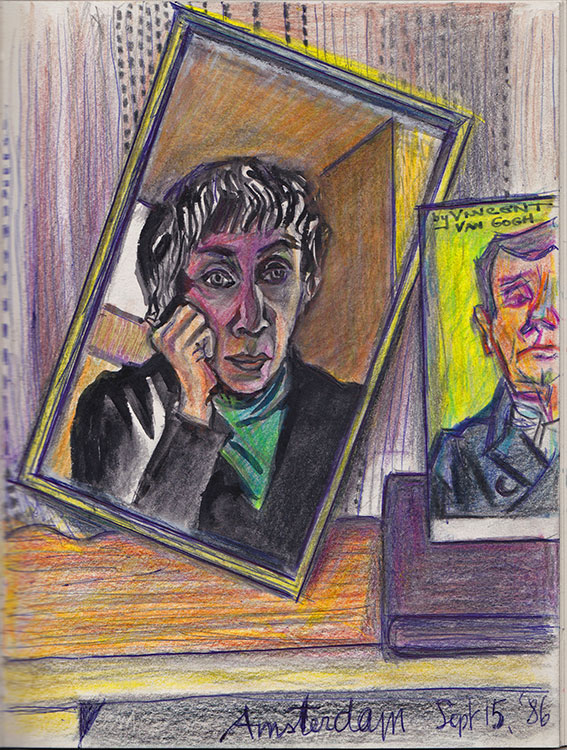 Dick Higgins was one of the speakers at a Bookworks conference I attended in Philadelphia in 1982. 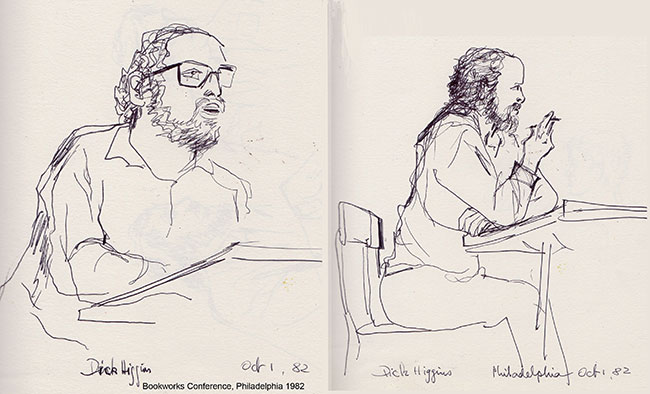 Leon Cych and Peter Baines at the National Poetry Centre, London 1982. Peter Baines (AKA Street Talkin' Pete) was a friend and together with Marilyn, his wife at the time, we went on protest marches, including to the Greenham Common women's peace camp in 1983. 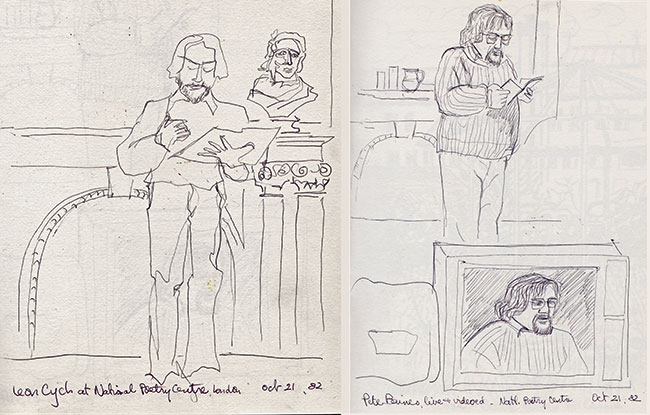 John Rety was a friend but there must be hundreds of people around the world who can claim that privilege, certainly many in my part of North London where he and his partner Susan Johns ran the Torriano Meeting House. Shortly before he died in 2010 I bumped into him (literally) in Camden Town and he said, let's do a comic strip, I'll provide the text, you draw the cartoons. He was like that, as if life was an ongoing conversation with time an irrelevant interruption. I said fine, let's do it. We were going to meet and work it out. Then he died. Everyone in the above sketches is dead, apart from me. And Leon Cych who I drew but never met (I've just Googled him and am glad to see he's alive and doing well).

John Rety and Gilbert Adair at a poetry event in London 1986. 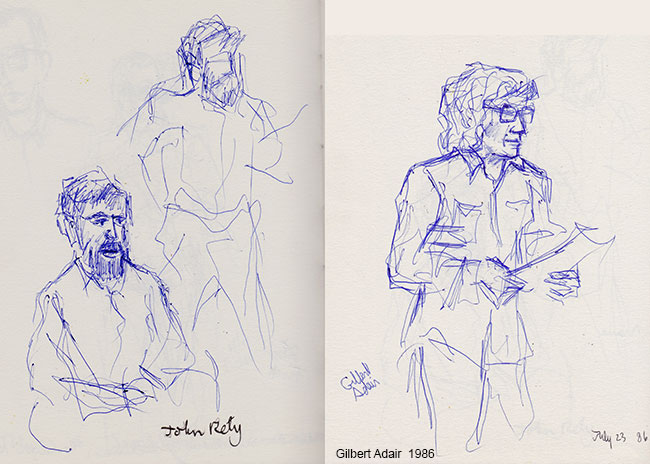 Nevertheless these are emotions which many people still feel, whether expressed or not. Nobody ever did it better than Jacques Brel in his terrific original, unpolished version - shared here from YouTube.

I've recorded myself intoning it just now, you can listen to it here .

My translation below is far from perfect but better than the awful ones I've seen via Google.

Don't leave me
Let's forget
Forget everything
That's already vanishing
Forget the time of misunderstanding
And the time wasted
Who knows how
Forget those hours
Which sometimes killed
With blows of why
The heart of bliss.
Don't leave me (r)
I'll offer you
Pearls of rain
From countries where it never rains
I'll dig the earth
Even after my death
To clothe your body
With gold and light
I'll build a kingdom
Where love is king
Where love is law
Where you'll be queen.
Don't leave me (r)
I'll invent
Nonsense words
Which you'll understand
I'll tell you about
Those lovers
Who saw their love's fire
Twice rekindled
I'll tell you the story
Of that king
Who died because
He could not meet you.
Don't leave me (r)
An ancient volcano
Believed extinct
Often reawakens
And there are burnt lands
Which yield more wheat
Than the kindest April
And when night falls
When the sky is blazing
Doesn't the red
Marry the black?
Don't leave me (r)
I won't cry anymore
I won't talk anymore
I'll just hide here
And watch you
Dance and smile
And listen to you
Sing and laugh
Let me become
The shadow of your shadow
The shadow of your hand
The shadow of your dog
But
Don't leave me (r)

A few pages selected from sketchbooks to conclude the posting of some of my old drawings. They were all drawn quickly from life, although those of the Falklands debate were done while watching TV programmes. The process which sometimes moves brain, eye, hand, pencil (or pen, brush etc.) to work harmoniously together in response to a visual/emotional stimulus is something of a mystery. Skill acquired by long training and regular practice doesn't necessarily account for it and it can't be willed - it either happens or it doesn't.

If anyone recognises the face of that famous musician whose name I can't remember, please let me know - he was a violinist and somewhat hunchbacked. I met Shyam Singha only once during a talk he gave at a centre in Hampstead where I was working. Bob Cobbing was a friend and a well-known performer and writer of Concrete poetry. 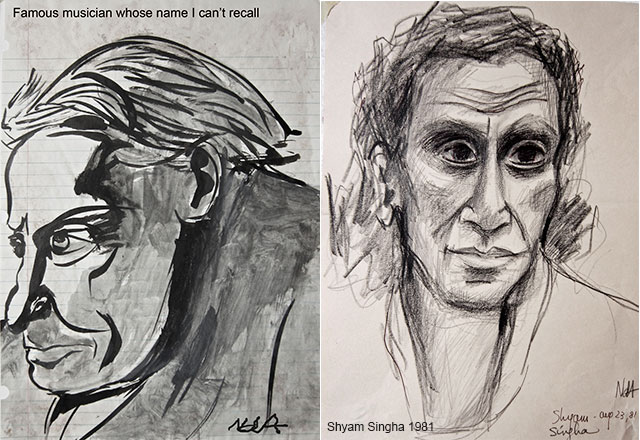 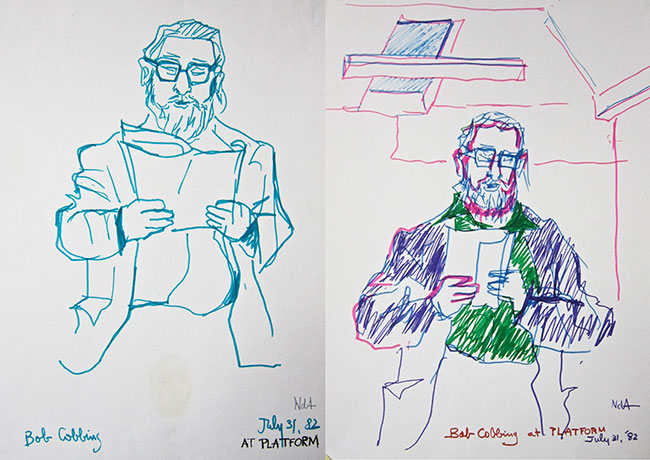 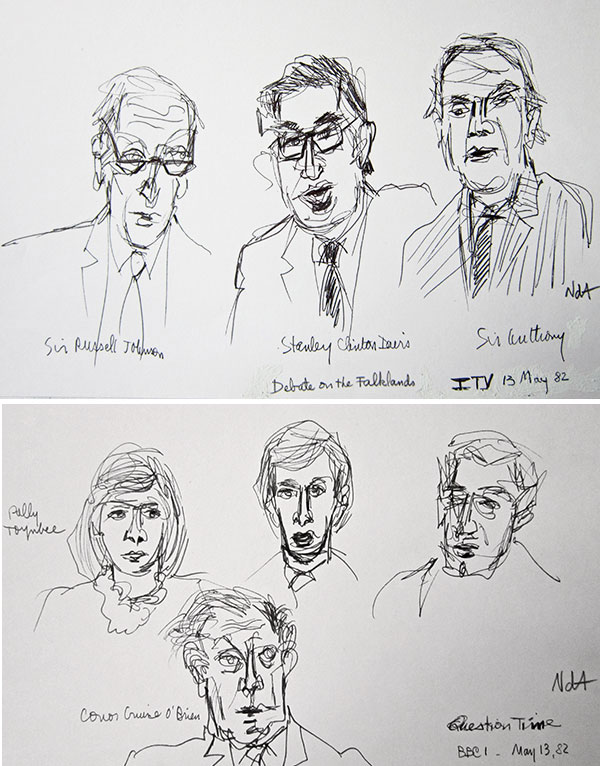 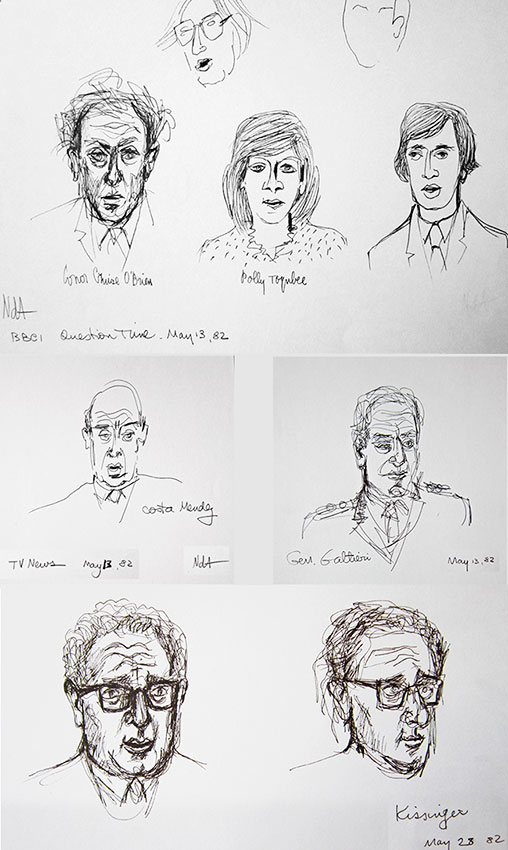 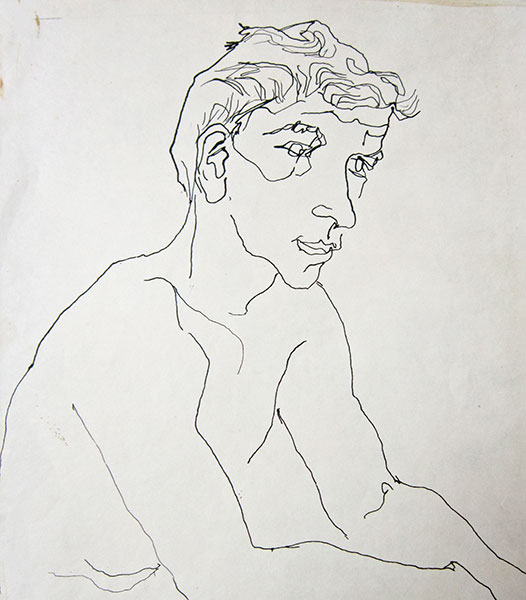 AI WEIWEI AT THE ROYAL ACADEMY 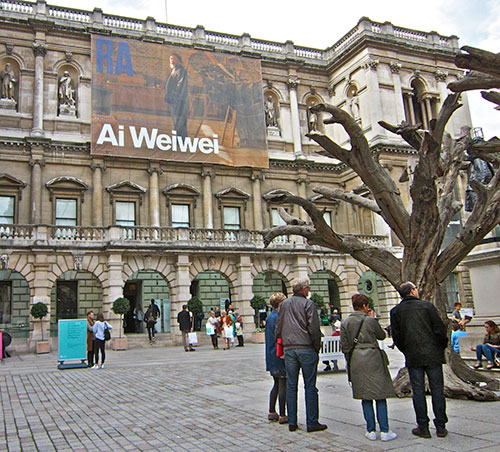 The name itself sounds like a cry of anguish...Ay! Way! Way! He has every reason for anguish but he's not crying, at least not in public. In public he exhibits two perspectives: on one hand, a calm defiance of the monolithic, arthritic, despotic regime hidden behind his country's mask of modern progress. And on the other, a display of meticulously crafted objets d'art, mixing the materials of venerable ancient Chinese artefacts with irreverent attitudes of surrealism and conceptualism - shades of Duchamp, Magritte, Carl Andre and all.

The most valuable and moving piece in the exhibition, for me, is not an art object but a video: an effective and affecting piece of investigative journalism. It was filmed in the aftermath of the 2008 Sichuan earthquake and documents the discovery, due to stubborn and painstaking examination of the ruins by Ai Weiwei and others, that the instant collapse of several schools in which hundreds of children died, was due to local authorities' corruption leading to lax building regulations and shoddy construction. Weiwei's response to the scandal was to buy tons of the mangled rebar, the "'useless bones of all those schools that collapsed". In his studio, workers pounded hundreds of the twisted metal bars straight and kept hammering even when he was imprisoned by the government for several months 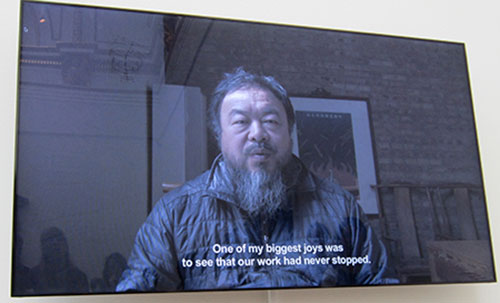 After his release Wewei created, with 38 tons of those rusted rods, a respectful and defiant memorial to those lost children, titled Straight, of which he has said:
The tragic reality of today is reflected in the true plight of our spiritual existence. We are spineless and cannot stand straight. 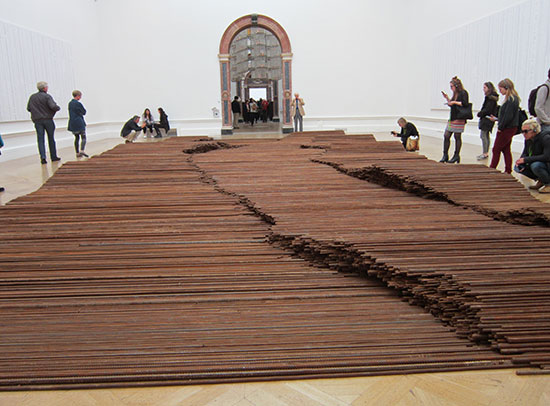 The problem I had when looking at this...installation...yes, that was exactly the problem. It had become an 'Installation' because of where it is shown: in a prestigious art institution. So the whole point of the memorial- its history, its meaning - has become merely a caption for an art object and its viewers are the people who go to art exhibitions. Does this make sense? Not to me. What would make sense would be if Straight was laid out in a public place in Sechuan where the children died, for example, or in front of government buildings in Beijing. But of course the Chinese authorities would never permit this. So the next best locations for exhibiting it would be...Well, you can see what I'm getting at.

I like Ai Wewei, I respect his integrity, his courage, patience and humour, his defiant stoicism in the face of the mental and physical hardships, injustice and repression he (and thousands of his unseen, unsung compatriots) have suffered, are suffering. I just wish he was as bold, unconventional and resourceful in his choice of venues for the display of his protest-works as he is in protesting.

Peering down into the several mini-tableaux which reproduce, half life-size, the actual cell in which Wewei was detained, along with the Chinese guards who watched his every moment, I couldn't help wondering, again, if this was the relevant place to show them. In the art gallery context they were reduced to rather ironic toy-scapes, even when you had read the explanation. 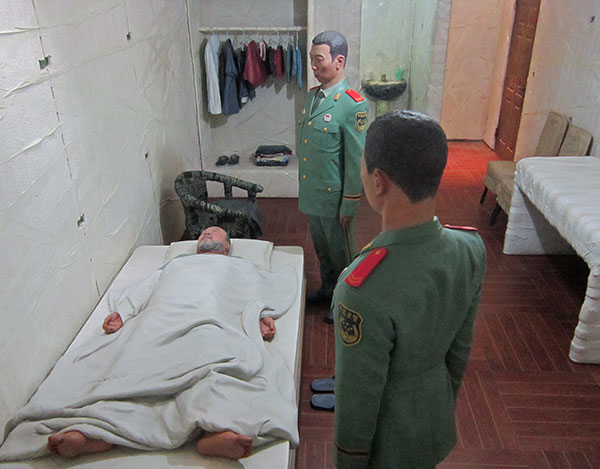 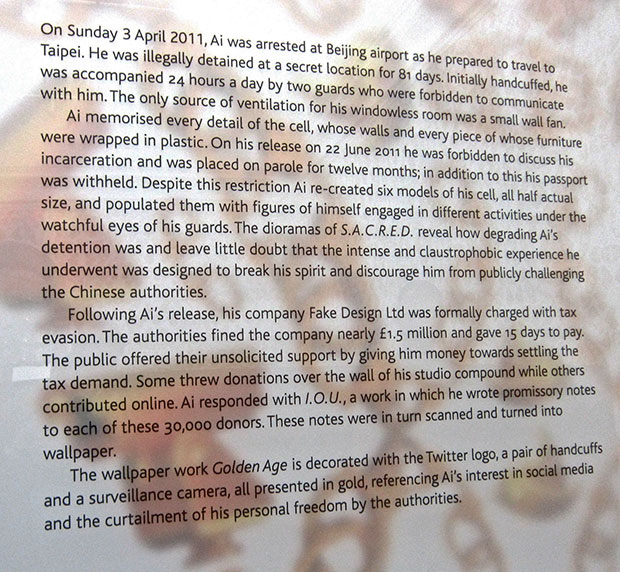 As for Ai Wewei's objets d'art in the exhibition, I must admit to being underwhelmed. The joke in this one is that the object lifting its legs at tradition is made from a traditional Qing Dynasty table. Get it? 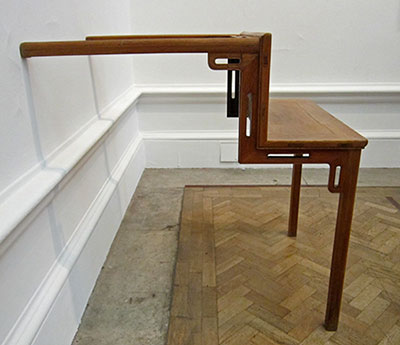 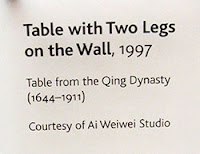 Below, I think it's the caption which is the conceptual artwork rather than the cute paint-streaked vases. Those private collectors, did they buy because their vase was a Weiwei or because it was Han Dynasty or Neolithic? And did the price reflect one or the other? And
who is taking the mickey of whom? 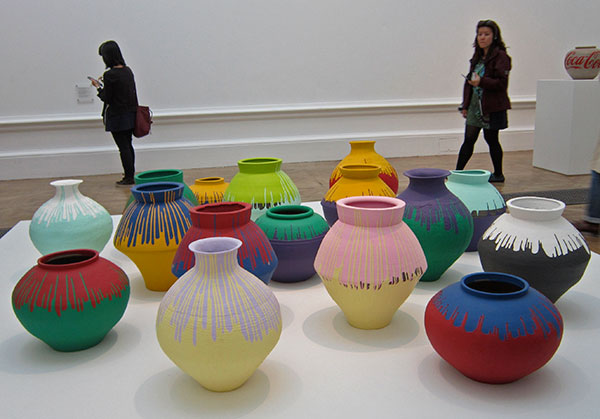 The bicycle chandelier is rather beautiful, in the way that a twenty layer birthday cake made of sugar cobwebs would be beautiful but even the Chinese bicycle symbolism doesn't save it from being instantly forgotten (by me) once I've seen/eaten it. Before I end this grumpy review, I want to apologise for it to Ai Wewei even though he surely won't be reading it. I'm truly glad that the Royal Academy is exhibiting his work, he deserves encouragement and support from every quarter, public and private. I sincerely wish him well and I hope that his country's leaders will come to their senses, in his lifetime, and recognize what he, and all the other exceptional individuals they have been tormenting and repressing, could do for China if they would only be given the freedom which is every human's right.
Posted by Natalie d'Arbeloff at 4:55 am 10 comments: