Sidetracking from Brexit, elections and other probable major catastrophes I notice that my bank account has been debited with a £7.99 which doesn't tally with anything I've spent but was taken by Amazon Prime. I check my Amazon account and, behold, the sneaky bastards have made me a "member" of Amazon Prime without my knowledge or consent, setting up monthly payments of £7.99. After following their deliberately tortuous path I finally manage to cancel this fraudulent "membership" via a "conversation" with a robotic person or actual robot on the "chat" option.

I think it is simply fraud masquerading as benevolent advertising. It is based on the cynical but accurate prediction that many people will not even notice that they've been conned. Yes, Amazon will refund if you wise up and demand it but have a look at the hoops they make you jump through before that happens. The whole Prime thing was very carefully and deviously designed as a trap and it would be useful to know exactly how many people have unwittingly fallen into it.

Be warned! You are not paranoid. They actually are out to get you, without your knowledge.
Posted by Natalie d'Arbeloff at 5:37 pm No comments:

The portrait I've been working on, which is now finished, is of the brilliant cartoonist Steven Appleby. I've always loved his work, his comic strips for the Guardian and other publications, his books, his absurd/astute/surreal/absolutely real sense of humour, very much in tune with how I see things. It was the happiest of coincidences that he was one of the judges of the Laydeez Do Comics 2019 Award for a graphic novel-in-progress and that I won one of the awards.

Iit was fantastic to meet Steven at the prize-giving event at the Free Word Centre on 31 March this year and, of course, to know that he liked my work. I asked if I could paint his portrait. He agreed and we arranged times when he could come and sit for me. In between sittings I worked from some photos I took.


I think my portrait captures something more inward than outward in his expression. Steven is a man who dresses as a woman. He transvests, not occasionally but all the time. It's who he is. I found this quality fascinating and enlightening. It made the issue of gender totally irrelevant and at the same time crucial. I don't feel there is anything odd or artificial about his appearance, on the contrary, it seems natural and beautiful to see male and female characteristics in one person. Here is Steven Appleby, cartoonist par excellence, proud to call him my friend. 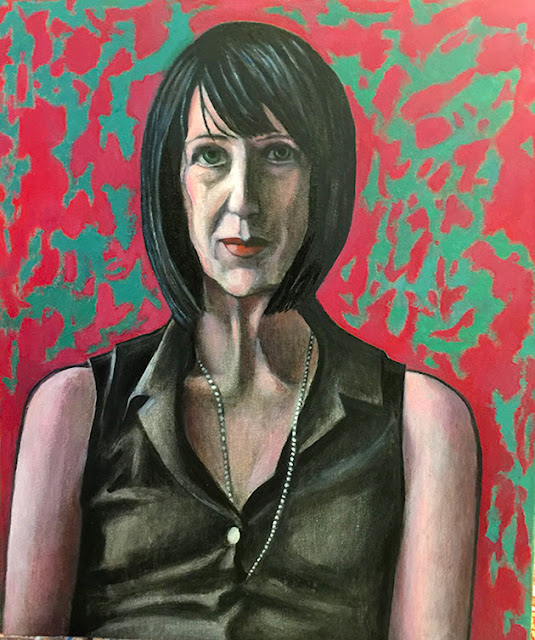 Posted by Natalie d'Arbeloff at 9:29 pm No comments:

There's nothing like meeting someone in your actual real life when it comes to friendship. Social media friends are great and I'm truly greatfull (not a mis-spelling) for those I've got to know through this cybernetic window. But a window is just a window and social media is not actual society.

Yesterday afternoon I had the real live pleasure of a visit from Pamela Robertson Pearce. We've only met via Facebook before but her multi-dimensional presence in my own 3-D home space was something really special. She even matched the colours in some of my paintings. 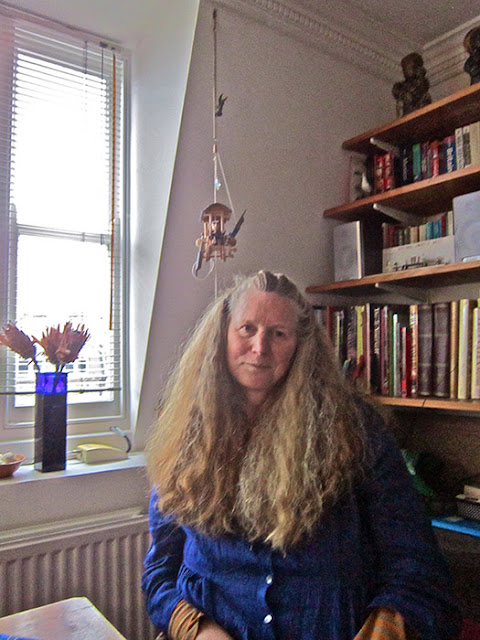 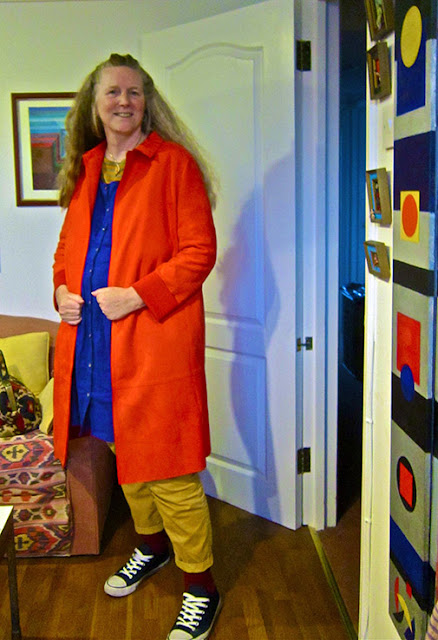 Posted by Natalie d'Arbeloff at 6:44 pm No comments:

I have simply been busy wih a terrific new portrait (to be revealed next week) and various stupid hassles with (absent) teeth.
Posted by Natalie d'Arbeloff at 2:34 pm No comments:

In the second half, Dick Jones, Doug McGowan and I did our Blaise Cendrars thing: reading/video/music, all in harmony and synchronicity. The room was full and the applause sincerely enthusiastic. Later, people looked through a copy of the Old Stile Press livre d'artiste, our TransSiberian book, and understood the difference between a hand-produced limited edition and a mass-produced book.


Got home after midnight after an odd train journey from Hitchin where I think I was the only passenger in the whole train. Tired but happy, sorry I forgot to take photos. 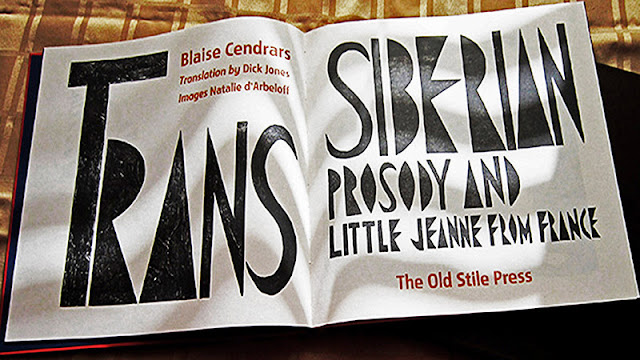 Posted by Natalie d'Arbeloff at 2:25 am No comments:

DEAR CHRISTINE IS IN SWANSEA

The other event I'm part of but, unfortunately will not be able to attend in person this time. is the 'Dear Christine' exhibition in Swansea at the Elysium Gallery opening on 4th October. I was at this exhibition's first showing in May this year at the Vane Gallery In Newcastle and posted photos of the private view.

Thanks to the unceasing efforts of Fionn Wilson, artist and creator-curator of this show, it is now on tour and will be in London early next year. Meanwhile, there will be poetry, music, film, talks, as well as Christine Keeler-related art works by twenty artists (including moi) at the Elysium Gallery - if you're in or near Swansea do not miss it. 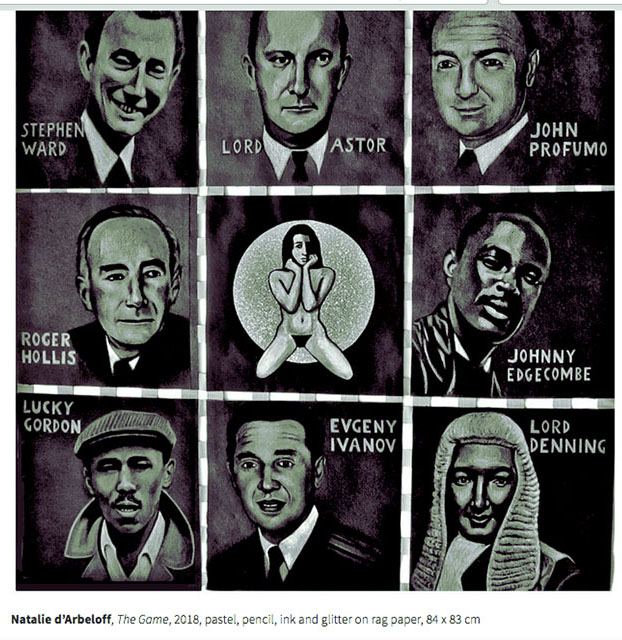 Posted by Natalie d'Arbeloff at 2:19 am No comments: