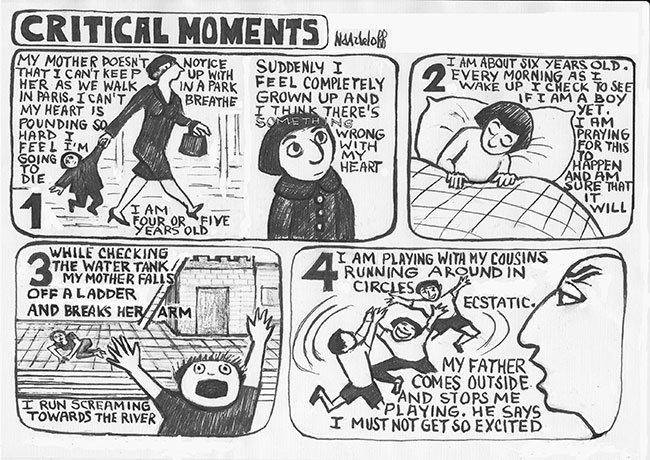 The Guardian online has just published this comic strip which I emailed them yesterday morning, in reply to a request in the Family section of the newspaper's print edition last Saturday, for early childhood memories. Here's the relevant Guardian page about their Witness project. Thanks Guardian, we meet again!

Lately I've been thinking that autobiographical material, depicted in some kind of cartoon style, is probably the visual language I feel most at home with. Defining one's own creative voice is a difficult, ongoing process and in my case, complicated by over-exposure to too many influences and languages, both literal and metaphorical. From earliest childhood I absorbed the sounds and inflections of French, Russian, German, Spanish, Portuguese, English and later on, Italian. Alongside this multilingual cacophony (which seemed normal) was a multi-dimensional, restless family lifestyle, never completely at home in any one place. So I suppose it's not surprising that I've always found it problematic to choose just one form of expression, one medium, one direction, one style that I can call "mine" among so many possibilities. But who knows, I might change my mind tomorrow.
Posted by Natalie d'Arbeloff at 2:21 am 9 comments:

The enthusiasm with which many of us embraced blogging has dwindled with time, as most enthusiasms tend to do. No, I'll rephrase: it's not time which dilutes enthusiasm but one's own inability, or reluctance, or resistance, to maintaining an enthusiasm alive and fresh as it was when you first felt it, for something which lifted you up, moved and challenged your creativity. If boredom or disillusion sneaked in and you allowed them to stay, a chance to go much deeper into that enthousiasmos may well have been lost.

My own blogging enthusiasm, born in 2004, has indeed faded but it is by no means dead. One way the flame can be re-kindled is by the example of some bloggers who consistently, faithfully and skillfully plow their own patch of cyber-land and when a meeting with some of them in real life occasionally happens, it's a significant event. I am very fortunate that blogging has given me the gift of a few lasting friendships, subsequently reinforced by face to face encounters.

So it was that a few days ago I had the great pleasure of meeting Vincent, A Wayfarer's Notes and his wife Karleen. To have the two of them sitting at my table was as easy and natural as if we had known each other for years. When a blog is a reflection of a person's whole self, distilled and offered to the reader in thoughtfully wrought words (with or without pictures) then, if you meet in the real world, the artificiality of most social encounters is eliminated.

I only discovered Vincent's blog fairly recently, led there by some comments he had made elsewhere, and when I began to browse his archive, I was hooked. Something in his approach which particularly resonates with me is summarised in two brief quotes I've pulled out of two  separate posts:

I want to observe what goes on in my life, without tying it down into concepts; to talk about what happens, without naming.

When I sit at my desk trying to tell it how it is, words flee. Only when I look elsewhere, sniff the open air, read the book of Nature, catch the phrase someone utters, aloud or in a book, do I collect clues to define my true state. 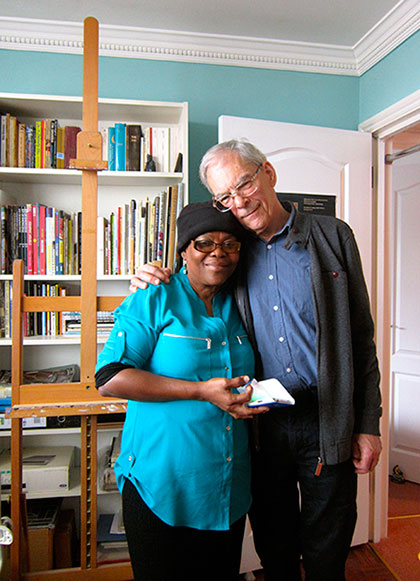 During the too-short two hours that Karleen and Vincent spent at my place and through browsing attentively in my blog archive, he collected not only sufficient clues to write an insightful review of La Vie en Rosé but also of 'the true state' of my work in general.

If you haven't yet discovered Vincent's blog,discover it now.

Enthusiasm, enthousiasmus, entheus....welcome back!
Posted by Natalie d'Arbeloff at 7:06 am 16 comments: