I went upstairs to my studio with no idea of what I was looking for. I didn't want a plan for building my robot, it had to emerge of its own accord.

A stained old rubber glove caught my eye and said: start with me. So I picked it up and the next steps immediately followed. I realised that the robot doesn't have to look like a robot. It's robotic, yes, but lives inside my mind so it can look like whatever its playback activity looks like.

I stuffed the glove with cotton wool and fitted it over a plastic pot. Then I saw that the fingers were saying something so I cut circles out of card, wrote the words on them and attached the circles to the fingers with bits of wire. Finally, the hand said that it needed an image and I knew right away what it wanted: the crying baby, one of the drawings for my graphic novel-in-progress. I cut out and pasted a small scan of it onto the rubber glove hand. Robot finished, I took photos of it from different angles and here they are for your amusement.

You may not believe this but I kid you not. This absurd concotion which is not, repeat NOT a work of art but a utility, has fulfilled its purpose. It has lost its robot power and is merely a thing which I will smile at now and then. Try the experiment yourself and see what happens. 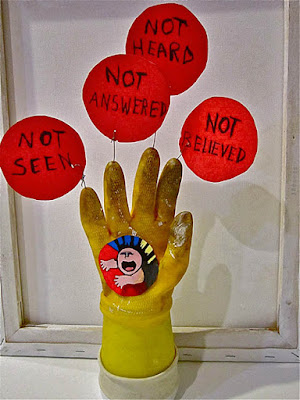 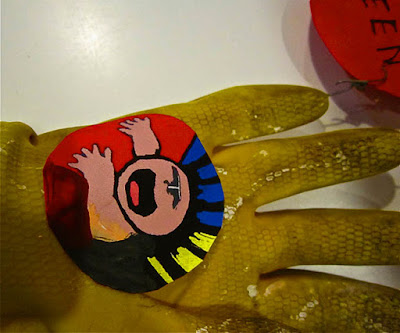 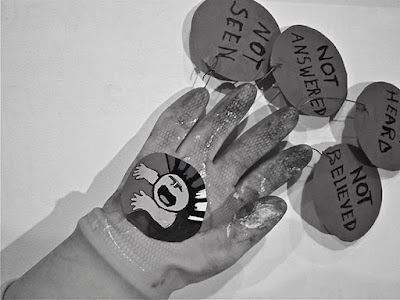 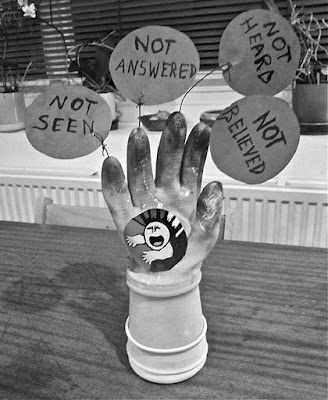 Posted by Natalie d'Arbeloff at 3:27 am 2 comments:

Do you do this? Play back in your head a conversation you've just had with someone - could be family or friend or professional or whoever - which has upset you because you were not believed, or not listened to, or dismissed, regarding a matter in which you have the facts and speak the truth. So you playback the conversation in your head over and over, adding more fuel to it with every repetition, scratching at that wound of injustice until it metaphorically bleeds and the upsetness dominates your day. Do you do this? Let's call it the Playback Syndrome or PS.

I do it. But in recent years I've become aware that I do it, whereas in the past it was automatic, robotic. The robot is still there but I now see it and, if I'm paying attention, I know how to shut it down. I have found a cure for it. I expect to hear from the Nobel Prize people. If you are afflicted with Playback Syndrome (PS) here is the cure I have found:

You build your robot out of cardboard or any junk you have on hand. It has to be like the robot in your head, as accurate as you can make it. When it's finished, put it someplace where you'll see it every day. That's it. When I've built mine I'll post a photo of it.

Posted by Natalie d'Arbeloff at 8:26 pm No comments:

Another irrelevant update on an irrelevant subject so if you ever see me grumble in this space about all the irrelevant rubbish littering the internet in even greater quantity than the actual physical litter with which we humans drown this poor little planet, please remind me of my own frequent, if not total, irrelevance.

So the last three blind mice-teeth in my upper jaw are gone forever and the four delinquents remaining on the lower level are not happy but so what. Because I have this soap box from which to unload and upload my grievances and enthusiasms, I can make fun of it all and that's helpful. We all need a soap box, don't we? Even the deeply shy, quiet ones have their inner soapboxes. What images can I post to enliven this? I'll look for something.

THREE OUT, THREE TO GO

Totally useless and uninteresting information but I'm posting it because it makes me feel a little bit heroic and a little bit rebellious so why not? You're not supposed to talk in polite society about teeth, missing teeth. Shameful stuff, more intimate than sex innit? Fact is I'd rather be seen dead than without my..ahem..you know...those things.

Anyway this morning I had three more or less rotten gnashers extracted from lower jaw which leaves only three still standing in that location. Later this week the only three survivors in the upper jaw will hit the floor (not really, I'm saving them in a little souvenir box). All the empty space will be filled by new temporary dentures, not a new experience for me but more radical this time.

My local NHS dentist is gentle, competent and caring. She asked if I wanted music. I said yes, Bach. So a Brandenburg concerto played while she did the deeds, three of them. In the intervals, to give me a break, she and I and the nurse chatted about countries we came from or had lived in and about age and attitudes to it. They're both young and I'm old, if you want to be literal about it, but in cosmic terms which are much more true, well, what can I say? I go back to Ancient Egypt, XVIII Dynasty.

Posted by Natalie d'Arbeloff at 4:27 pm No comments:

Since I'm blowing my trumpet at the moment might as well add another toot or two.

Here's a partial list (haven't updated it for quite a while) of public collections where some of my bookworks have been acquired since I began making them in 1974. If you happen to be in any of those places you can go to their Special Collections department, ask to see any bookworks they have by me. They will be brought out and you'll be given gloves - I know, but that's how it is - and you can peruse to your heart's content. http://www.nataliedarbeloff.com/aboutndapress.html

Posted by Natalie d'Arbeloff at 4:42 am 5 comments:

Extremely happy and proud that the last copy (I made only five similar but not identical ones in 1988) of PATER NOSTER has been acquired by the wonderful Bridwell Library at Southern Methodist University in Dallas,Texas. I shipped it last week and it has now joined other NdA artist's books in their Special Collections. So proud am I that will quote from an email I just received from Arvid R. Nelsen, Curator of Rare Books and Manuscripts and Librarian for Special Collections at Bridwell:

"I should note that Rebecca (Rebecca Howdeshell, Digital Projects Librarian) and I each loved the experience of opening the work up - the unwrapping and the arrangement of the work itself. It unfolds in such a complexity of layers and both demands and rewards the interactive experience of the viewer/reader. The structure is evocative. It strikes me as a ladder constituting the ascension of the prayer. I further love the formal complexities of the impressions of the words emphasizing the three-dimensionality of each paper leaf - combined with the sense of your hand in the expressive colors adorning the surfaces."

For the benefit of anyone whose eyes may have rolled or hackles may have risen (do hackles really rise?) at the words Pater and Noster and their context, please give me another minute before you depart. The problem is words, whether inscribed in stone or on the pages of ancient sacred books. Words are human things and we don't know what we're talking about much of the time. If the image that came to your mind provoked by the words PATER and NOSTER was of a bearded old white patriarch sitting in the sky dispensing rewards and punishments, then no wonder your eyes and hackles are rolling! Mine roll too, at that image, whether drawn by Michelangelo or Disney. But listen, here's the thing:

I do believe wholeheartedly that there is SOMETHING which is not any THING we are capable of describing in words or images but which absolutely exists and is at the heart of everything that exists. I made this "book" named Pater Noster as a personal celebration of, or offering to what Martin Buber called the "THOU". It's a handmade, joyful object, like a DIY altar. 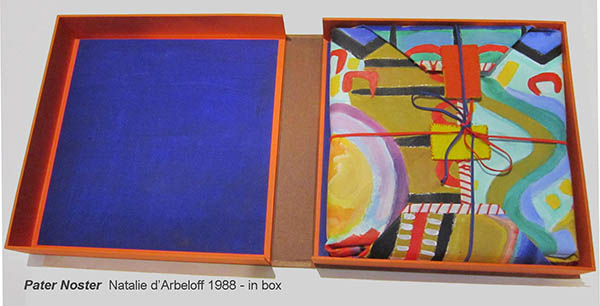 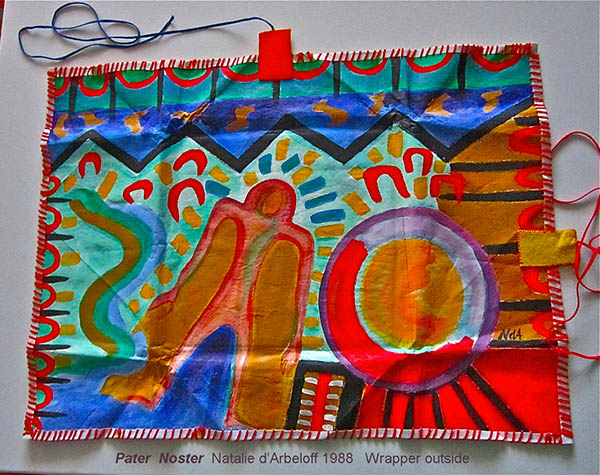 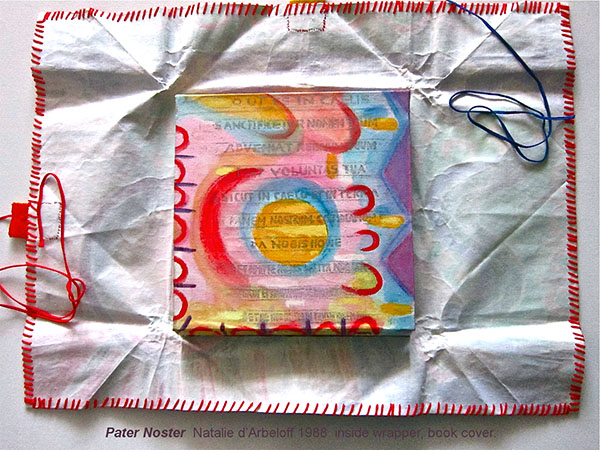 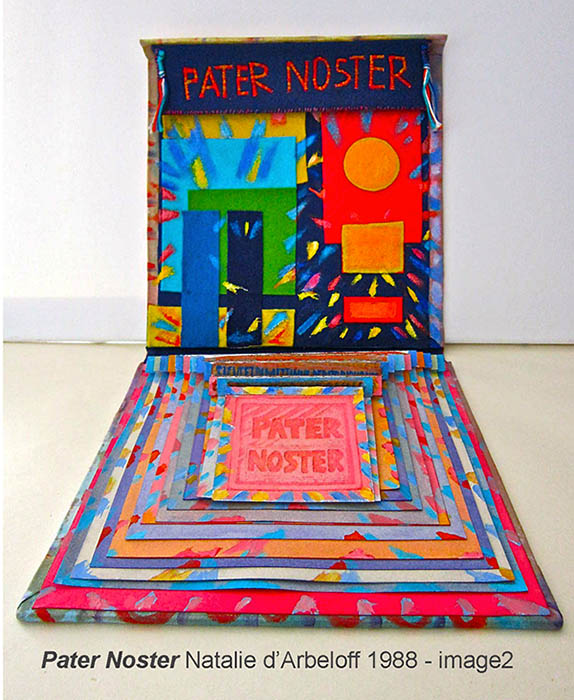 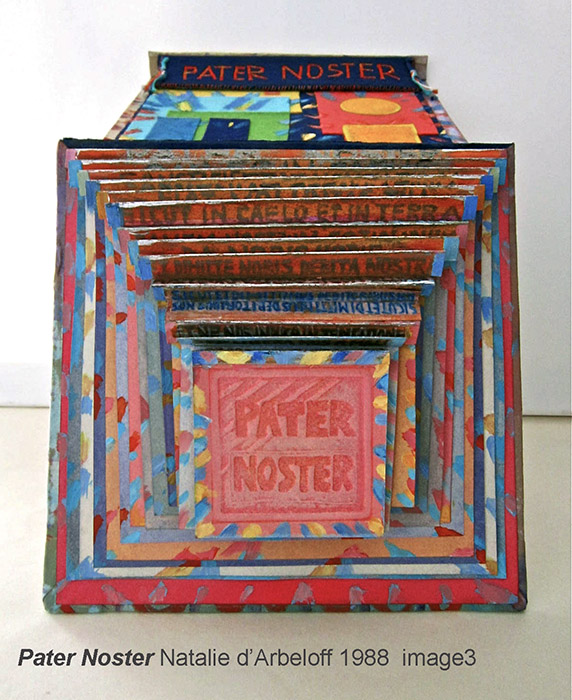 Posted by Natalie d'Arbeloff at 12:49 am No comments:

Today in Rome a celebratory event is being held in honour of Gerardo Guerrieri, my sister Anne's late husband, dear brother-in-law and friend. The announcements about the event feature a portrait I painted of him way back in 1959 when he and Anne came to visit me and Reg in Paraguay. You may remember I've written about all of this before, here and in my online autobio. Gerardo died, tragically, in Rome in April 1986, on the same day as the Chernobyl disaster. 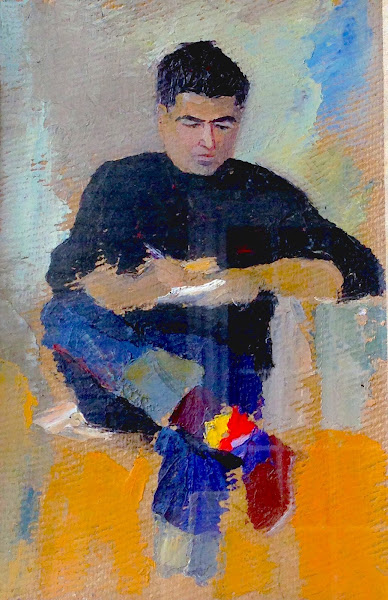 I've just translated the press release about this event and here it is:


The Teatro Basilica in Rome opens its beautiful premises on the 25th October to an unusual presentation, bringing to life a portrait of Gerardo Guerrieri.

Readings, performances, images, stories, divided into twelve scenes, will re-enact the presence - sometimes public, sometimes hidden - of a man of the theatre who moved for over forty years on the principal crossroads of Italian culture, observing the scene with intense and fertile attention.

The audience at this rewarding day (from 11am to 9pm) will be able to participate in the unfolding of its diverse stories. In the multi-faceted work of Guerrieri, as director, scriptwriter, historian, translator, instigator of international collaborations and inimitable reporter and narrator, there appear legendary figures such as Eleanora Duse, Visconti, Chekov, Stanislawski for example along with the adventurous innovations of the Living Theatre, Bob Wilson and Peter Brook among many others. The day is conducted by Stefano Geraci and Antonio Calenda. With them to animate the scenes, there will be stories and memories from (Marco De Marinis, Stefano Locatelli, Selene Guerrieri, Fausto Malcovati, Laura Mariani, Ferruccio Marotti). Also from young students(Emanuela Bauco, Tiziano Di Muzio, Marta Marinelli) actors close to Guerrieri (Mariano Rigillo e Ulderico Pesce), the director who created an important documentary on Guerrieri (Fabio Segatori) and the actors (Gruppo della Creta) who, directed by Alessandro Di Murro will performe writings by Guerrieri selected for each scene. Finally, photographs by the great phtographer and friend of Guerrieri, Tommaso Le Pera. 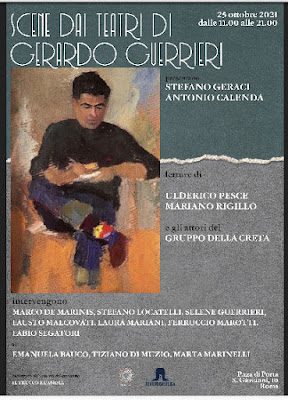 Posted by Natalie d'Arbeloff at 7:21 pm No comments:

Am still here, on this planet and in this space. Just busy with teeth, graphic novel and household stuff. In case anyone was wondering.
Posted by Natalie d'Arbeloff at 10:51 am 2 comments:

Drinking coffee in a cafe and thinking about identity, as one does, I suddenly remembered Augustine and Identity, one of the ten comic strips in my Small Packages series. That was over thirty years ago and nothing's changed, I'm still asking the same questions. Don't know if that's good or bad but here's that strip. 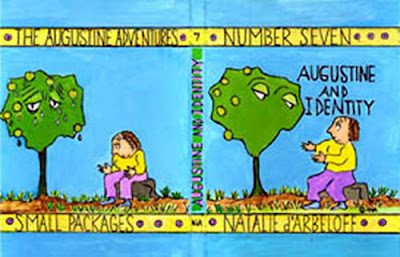 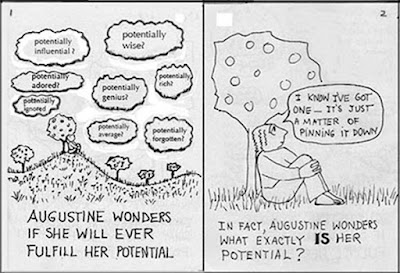 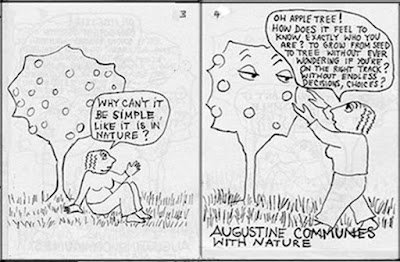 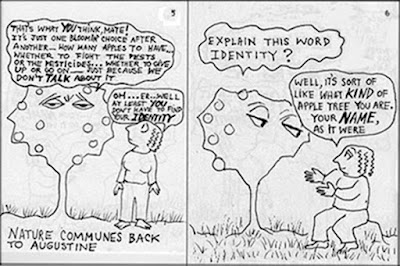 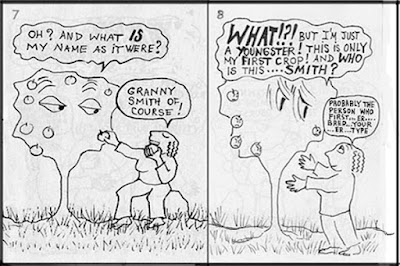 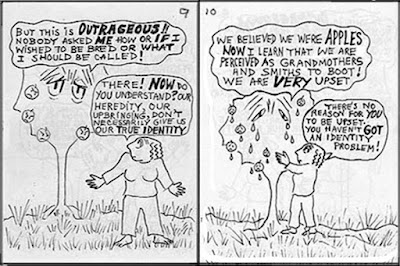 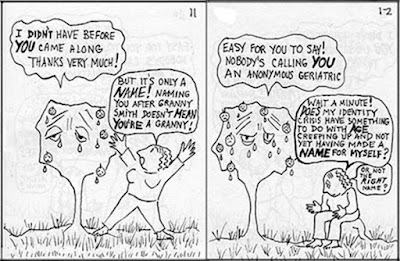 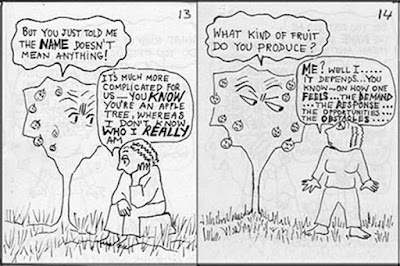 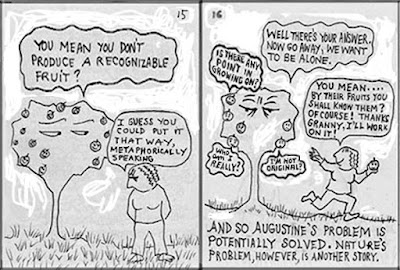 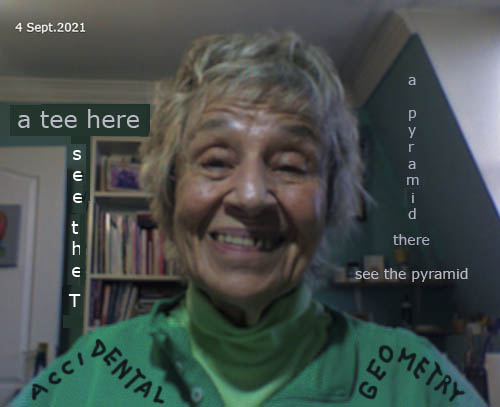 Posted by Natalie d'Arbeloff at 8:21 pm No comments: