Why is it that ideas and plans which seem completely rational, feasible and even brilliant at night often look quite the opposite in daylight?

Is daylight necessarily the best light in which to evaluate the reasonableness, feasibility and even brilliance of an idea?

Or is it simply that we're brainwashed to believe that daylight is good while nightlight is fun but a bit dodgy? "Nightlife" for instance means various degrees of drunk and disorderly.

But why shouldn't our brain, consciousness, subconsciousness and all the other bits of wiring work just as well under the moon as under the sun?

Weren't our primeval ancestors on the qui-vive at night, keenly aware of dangers and opportunities? It must also have been the time when their imaginations were most active, inventing stories, figuring out solutions to daytime puzzles. 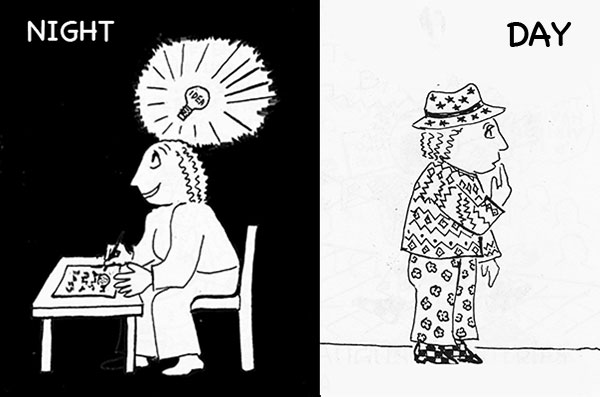 THE SEASON OF CHILDHOOD 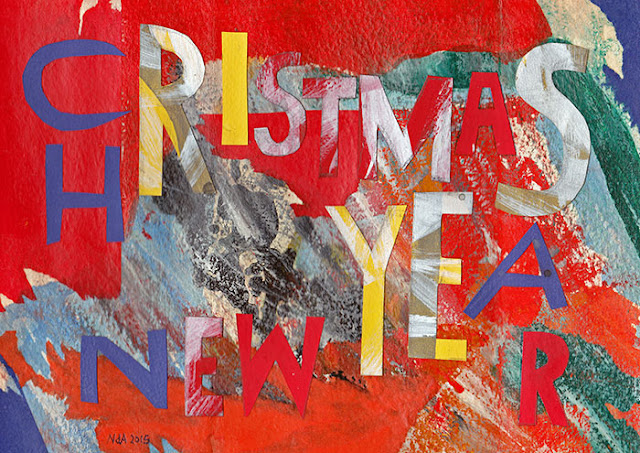 To all who pass by or linger here for a while, my warmest wishes, whether you celebrate this season or not. The words are banal and ready-made but the wishes are genuine. I truly mean them and if we were actually face to face, rather than merely cybernetically connected, I would greet you as a friend, whether we have met in real life or not. Sharing one's thoughts, observations and/or work via the internet tends to break down the usual barriers to communication and you can sometimes get to know a person better through their blog than at most social occasions.

For me, only in childhood was this time of year something to be excited about but all I can remember about that excitment was one Christmas in Paraguay when I was about six and it was hot and ornaments were hung on a little palm tree.

My childhood I do remember vividly, if not always happily, but always as a state preferable to adulthood. Whatever I am now was formed then and getting rid of most of the accretions that time has piled on top of the original is a task I consider to be essential. It's not a case of PeterPan-ism, sentimental nostalgia for childhood. Imagine a well-crafted little boat sailing on the ocean. As the years pass, barnacles and other stuff accumulates on the hull and slow it down, weigh it down. What I mean by 'getting back to the original' is therefore a kind of psychological/creative/metaphorical housecleaning - or rather boat-cleaning.

What never ceases to astonish, delight and inspire me is the originality of young children, generally before the age of ten. The things they say and do, the expressions on their faces. I marvel at them, entranced. Not having had children of my own I'm well aware that I've escaped the not-at-all entrancing bits, the sleepless nights, the endless chores, the irritations, anxieties etc. But that's no reason to give up being amazed by children.

So here's something to celebrate the season of childhood. When my niece Sarah was about nine or ten, her father (my brother) invented a bedtime story for her which she then illustrated with line drawings. When I saw the story and the drawings I was charmed and decided to publish The Piper of the Stars (NdA Press 1986) as a small hand-printed edition. I traced and etched Sarah's drawings, added aquatint, and printed the images on my etching press. Sarah and her father preferred using a pseudonym. The text was hand-set and printed on an 'Adana' treadle platen press in London by the legendary Polish printer Stanislaw Gliwa. It was his last project before he died.  Below are the cover, title page and a couple of the illustrations. 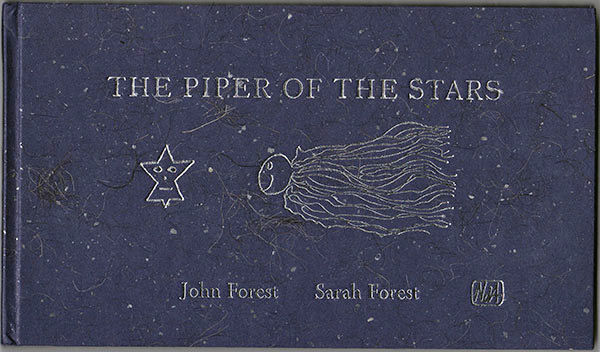 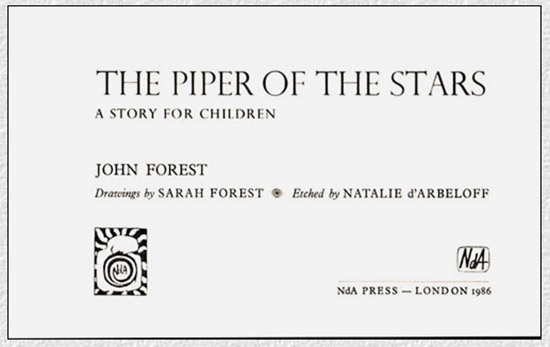 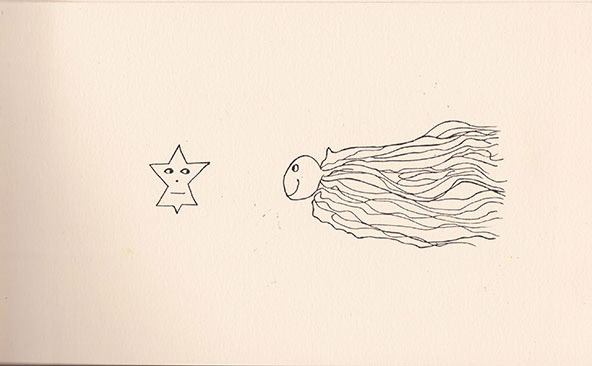 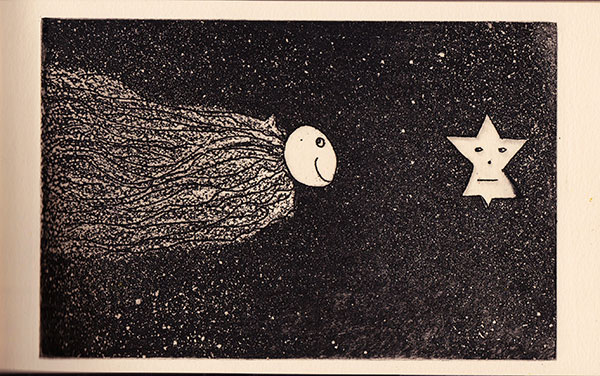 Sarah is married now and she and Elliott have two children, four and six years old. By all indications they too will one day be pipers of the stars.