THE ATTRACTIONS OF UNCERTAINTY

I’ve been busy painting. Painting is torture. Art is torture. Of course I don’t mean painting in general or art in general. I can only speak for myself, someone who from the cradle - well, twelve thirteen years old - chose to devote herself to the making of art as a way of life.

Someone like this has to be a born masochist. Who but a masochist chooses the principle of uncertainty as a career? Not only chooses but remains faithfully addicted to it forever? Never mind the difficulties of uncertainty in purely practical terms, look at the psychological ramifications of never knowing where or who you are and what you’re doing? And actually preferring to remain in that tight-rope position rather than seated in a comfortable, secure armchair, office or yacht? Yes, innumerable famous art-makers can be found seated in comfortable armchairs, studios, yachts etc. Are they also masochists? I have no idea.

Let’s just look at the attraction to uncertainty. For me, it’s the combination of four factors: receptivity, excitment, control, doubt. Those four states are whirling around bouncing against each other like quantum particles in…what? A glass of champagne?

By art torture I didn’t mean the angsty romantically furrowed brow of the supposed genius. I meant ordinary common torture. I’ll post a photo of the current painting when I’ve finished it. 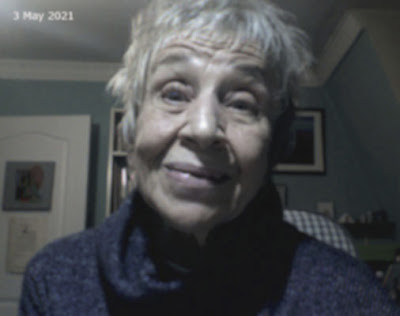 Posted by Natalie d'Arbeloff at 6:33 pm

I don't know why creative people choose to do what we do. Maybe it's not a choice.

Reading this again, I suddenly wonder whether you go through the same four factors when you choose your words, to make them so flexible, descriptive and precise, always a pleasure to read.

neena, I think it is both a choice and a calling. Some people might feel and "hear" the call but decide, for whatever reason, not to follow it.


Vincent, that's really encouraging to hear, thank you. If I really want to talk about something specific then the words come readily out of that desire. It's much more of a struggle when some kind of obligation or requirement to find the right words is on the table.