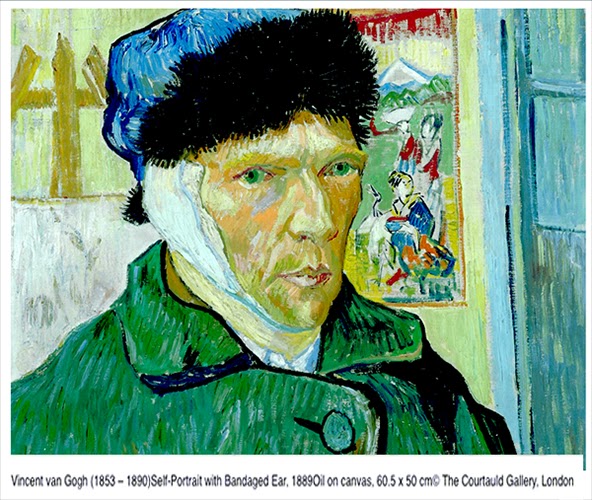 That ear business, I want to clear it up once and for all. They tell me you can put a notice on this book face and then many people see it and it’s like a disease, everybody in the world gets it immediately. So I’m going to tell the real story about my ear and then I’m off.


That bastard Gauguin started it. I say bastard but I loved the man, I worshipped him before I had the stupid idea to invite him to Arles. Stupid stupid, yes, it was stupid. But it was such a beautiful idea. We would be brothers in art, work side by side, paint and talk and eat and drink together and then the other painters would come and we’d sell our work and support each other. We wouldn’t be lonely anymore and it would be paradise.

But Gauguin, what did he do? He laughed at me. He laughed, stomping around my room waving a brush. Ha ha ha, paradise? It would be hell, he said. Paint with you, live with you? I’d rather die! You’re crazy and you’re a bore and your paintings are a mess. Look at those worms of paint crawling around your canvases, wiggly wiggly, all your crazy feelings crawling around, no dignity, no design, no serenity. Paradise? Ha ha ha! Nobody will come here, they all think you’re boring and crazy.

So I let him have it. I took a tube of chrome yellow, squeezed it into my hands then smeared it all over his face and his hair. He got hold of me, pulled my head back, grabbed a knife off the table and slashed my ear. It all happened so fast, I must have passed out. When I came to Gauguin was gone and I was bleeding all over the place. The pain in my head was bad but not as bad as the pain of Gauguin’s words. I couldn’t stand it. I had to see another human being. So I wrapped up the bloody piece of my ear that was lying on the table and took it to Rachel at the bordello. I gave it to her, she was always nice to me.

I never told anyone that Gauguin had done it.

That’s it. You won’t see me again.
Vincent
Posted by Natalie d'Arbeloff at 9:13 pm

I always wondered about that. I never believed a guy would cut his own ear off.

Well, I hope Rachel appreciated the thought behind the gift - whatever that was! :)

Bruce, there has always been speculation that Gauguin might have been responsible. I was just improvising, inventing a possible scenario, based on facts. Vincent's mental state could indeed have caused him to cut himself, but Gauguin's taunting and agressiveness might well have played a part.

Tom, have you ever read Van Gogh's letters to his brother? They are a moving, illuminating record of a man who was not only one of the greatest painters but also a beautiful soul. Don't mean to go all mawkish but Vincent does touch the heart.