It's 2 am on Monday but I'm cheating so that I can keep to my new resolution about posting every Sunday. I was in Camden Town this afternoon when the annual Palm Sunday procession went by, the neighbourhood donkey playing his part and about fifty people singing as they walked back to a local church. 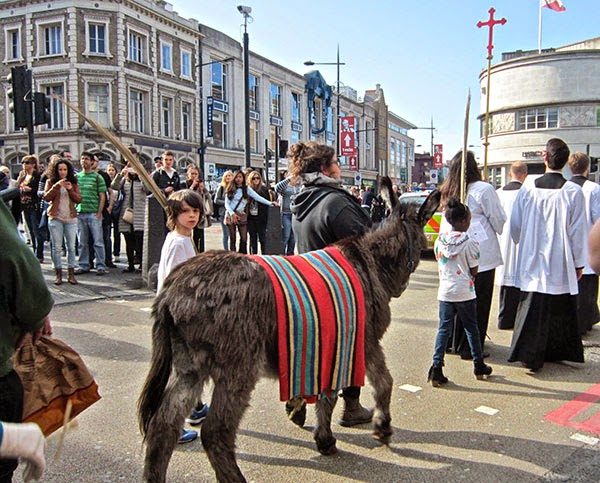 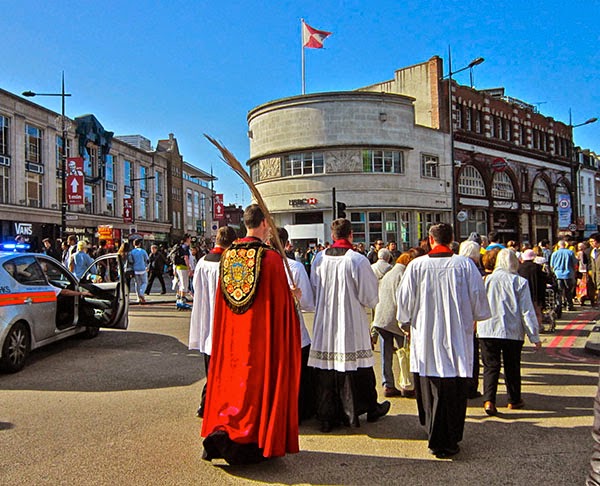 I sat in an empty Catholic church and emptied my mind, something I find quite easy to do, in order to connect to whatever it is which is not thought and not imagination but makes use of both if the channels are free from obstruction.

What is my faith? I was brought up Catholic but cannot honestly say I am a practicing Catholic any longer. I didn't 'lose' faith but my belief never came from Catholicism, it was always in me. As I've said here before, I'm a wholehearted believer in God but doubtful of all religions. The teachings of Christ mean more to me than any others but the institutionalising of Christianity has loaded that story with so much extraneous baggage - verbal, visual, emotional, sentimental, intellectual, political - that the simple teachings themselves have become almost invisible.

Among my friends and acquaintances there are perhaps only one or two who actually practice a religion, the rest are either agnostic, atheist, or 'spiritual but not religious'. Religion is not an easy subject to talk about. It brings out surprisingly vehement feelings among those who had a strict religious upbpringing and then rejected it. I don't know any Bible-thumping or other sacred-book-thumping fundamentalists but I'm sure it must be equally difficult to have an unemotional discussion about faith with them.

Why can't God be considered separate from any religion? Religions are created by humans and therefore subject to all human foibles. God (whatever that word means which is not necessarily defined in the Bible or any other book) is not created by humans (yes, I know. Most of you will say God is also a human creation. I beg to disagree).

Well, that's all I have to say today.
Posted by Natalie d'Arbeloff at 2:24 am

I loved the simplicity and honesty of this post; it gelled to easily with my experience of God and religion. It has long seemed to me that if you want to find God, don't look in a church. And don't look in the heart of a fundamentalist. That at least is my experience.

I've always found that an empty church, if one can sit there quietly waiting for all critiques, objections, analysis and conjectures to depart from the mind, is a very good place for inner dialogue with God. But I've been to services, Catholic, Protestant or Russian Orthodox, when a choir and a crowd can also lift the spirit beyond the boundaries it is usually trapped by.

That's pretty much how I feel about it. I only object to religions when they try to force their will on me or use it as an excuse for violent acts. Otherwise if they get comfort from it, fine. I don't but have been a Catholic and an Evangelical very fundamentalist in how i saw the Bible back then but not politically. Now I find religion just gets in the way of a lot of logic and living. Religion and God are not synonymous-- often don't even seem to relate.

I agree with everyone. Perhaps if there was less "religion" in the world, I could believe in God.

Rain, thanks for participating in this conversation - I wish it could be around a real table rather than a virtual one but anyway I'm grateful to the internet for making it possible at all.

Bruce, you could, as an experiment, try putting all religious doctrines out of your mind and then see whether God comes in. I think Gd might be like a shy bird and may have to be lured in with some kind of gourmet crumbs.

Thank you for the thoughtful post and the photos. I wonder about the donkey.

Hattie, the donkey is well looked after and, as far as I know, probably enjoys the walk and all the attention.

Hi, Natalie, I am back in the blog world again and enjoyed your Easter post very much. Both of my grandfathers were clergymen, in the Anglican and Episcopalian Church (same thing, really), so I was brought up an atheist. I really like going to church, would like to believe if I could, but I also feel that through history religious fervor has done terrible harm to the world. Nevertheless, most people seem to want and need it. Humans are such puny little things in the vast universe -- how could we have the answers?

Hi Anne, it's good to see you back in blogland and over here at my tiny blob in cyberspace. Indeed we are such minute specks in space-time, anything is possible and I doubt that puny human intellect will ever be capable of knowing it all.

Natalie, how did I miss this one? Anyway -- wonderful post and photos, and you know where I stand on these issues so there's no point repeating. I'm glad I've been able to be "inside" Anglicanism as a singer and thinker, but also outside and free to believe in a God who is not a human creation and happily refuses to stay inside walls or liturgies or rituals or rules except for the simplest one of all: "love one another."

Beth, I wondered when you would notice! It's such a joy to find you in my comments box and I miss you when you're absent. But since there's so much that we share, there's no obligation to always put it into words.

The question of belief and all the intricacies of religion will never be resolved and sometimes I think there's no point in even trying to discuss the subject, except maybe in roundabout ways.