MAKING UP FOR LOST BLOGTIME

Being at work every day all day on the illustrations there's not much to blog about but I still want to be part of this small community of blogger friends and feel bad about not contributing to the cyber conversation. So I've decided to post once a week, on Sundays, starting.... now.

For those of you who are not familiar with the process of printing a relief block, and those who are, I took some photos when I proofed a recent block yesterday. It is my illustration for what will be page 19 of our book of Blaise Cendrars' poem Trans-Siberian Prosody and Little Jeanne From France translated by Dick Jones, to be published by The Old Stile Press.
Here's my inking table with the block on the right. Below is a new two-handled roller I just bought (for an exorbitant sum) in order to be able to cover the whole surface of my blocks and avoid fiddly, haphazard inking with small rollers. 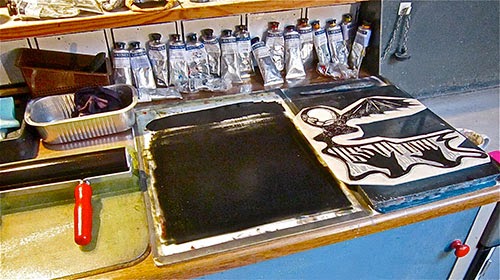 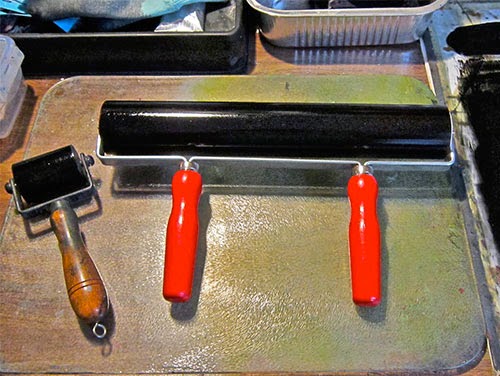 Inked block on the press bed. I've put two wooden runners either side of the block thus raising the heavy roller sufficiently to allow the block, plus paper plus blanket, to pass under it. That's because my press is an etching press, not designed for relief printing which doesn't require the strong pressure used to print etchings. I'm merely proofing each of my blocks so I can see what I'm doing during the process of cutting them but the final edition, text together with images, will be printed by Nicolas McDowall on his big letterpress in Wales. On his press, the ink is deposited on the block and/or type by the press roller itself whereas on an etching press plates must be hand-inked as the metal roller serves only to apply pressure. 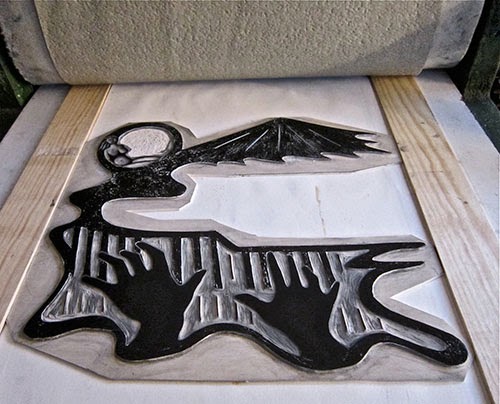 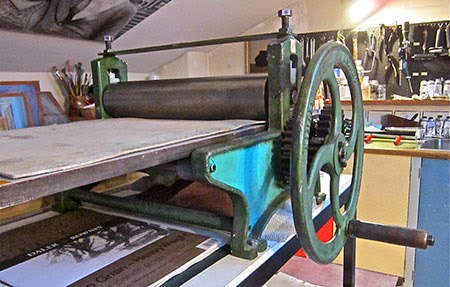 My press, ready to roll. 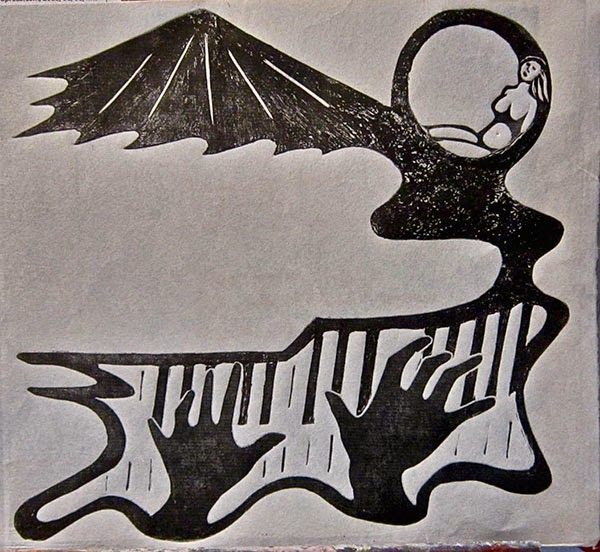 And here's the finished print. Unlike this photo the actual paper is white. This is the text which will go into the space on the left:

Now for something completely different. Many years ago (1973 to be exact) a book I wrote called Designing With Natural Forms was published by Batsford - it's out of print but copies can still be found in public libraries and via Amazon etc. It was illustrated with my drawings and with photographs by the late Ted Sebley. The experiment I set out to do was to focus on only four natural forms as if I'd never seen them before and then see whatever ideas came up. The four subjects were: water, a pineapple, the hand, eggs.

During the first experiment, I asked Ted to photograph a tray of water while I tilted and shook it to make various sorts of waves. 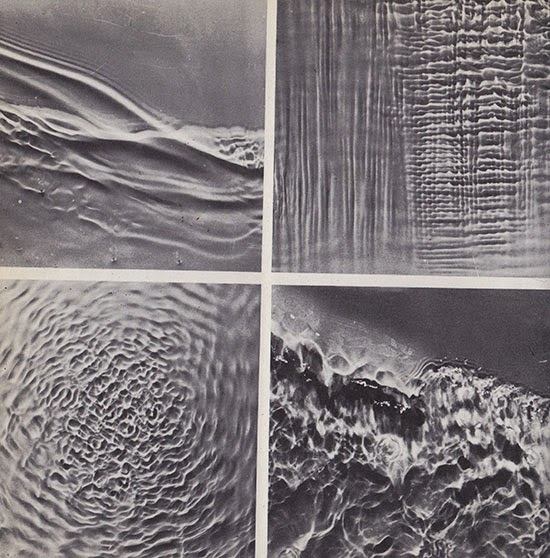 A few of Ted's photos. From the one on the top right I traced an enlarged detail: 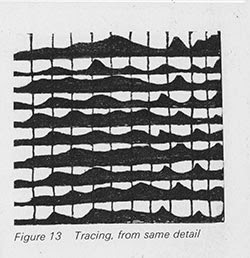 And then got the idea to turn it into a musical score. 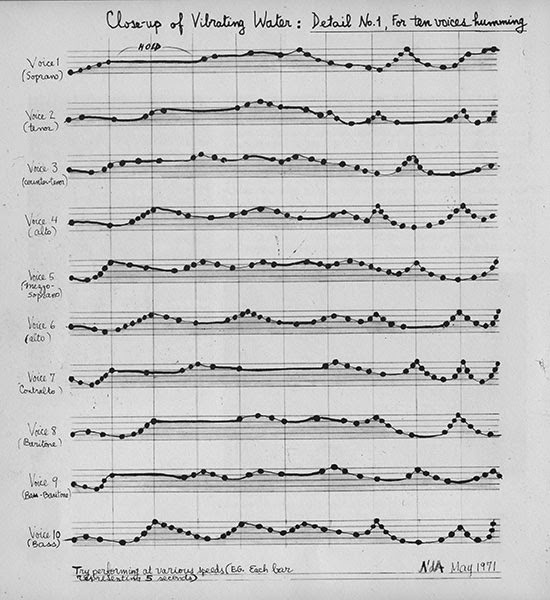 I'm not a musician and never followed this idea up but recently, after reading an extremely interesting post on Dominic Rivron's blog about Daphne Oram, I decided to ask Dominic (a very able musician and teacher) to see if he could do something with it. To my astonishment he actually came up with a composition that I could never have imagined, let alone created. I'm taking the liberty of copying below what he wrote in his email to me about it:

I've attached my finished effort as an MP3 sound file.
I don't have good enough equipment to overdub myself humming it ten times so I opted in the end for something I'd been into a while back: using the "low-fi" MIDI sounds that get used on computer games and the like to make original pieces. The music I'd made then was probably John Cage-influenced, with a nod to Eno and to Gamelan music.
I used the notes you'd written and gave the ten parts to ten different MIDI sounds. The first statement of your piece lasts about 1 minute 11 seconds. You mentioned in the book the possibility of playing it at different speeds, so I followed the initial statement of the piece with progressively faster (and louder) statements. Each time the music is played each part get passed to a different MIDI sound, to make a sort of "round".

(the MP3 file is working on the main Blaugustine blog if it doesn't play here.)


I don't know if something like this can be judged by normal musical criteria (however you define these) but as a reply to what was an improbable improvisation on my part all those years ago, I find it delightful and am moved that Dominic was willing to give it his full attention - thank you, Dominic!

And to end this Sunday-almost-Monday post here is the view from my window yesterday at dusk. 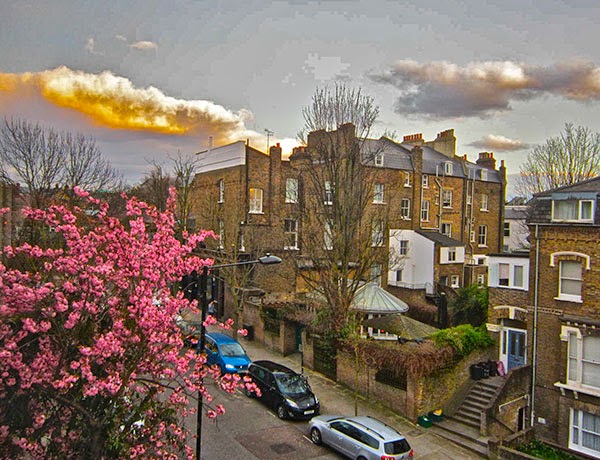 Posted by Natalie d'Arbeloff at 11:57 pm

I think that's a good solution. I mostly publish once a week for the blog i have had the longest. I know I lost readers when I did it but i had other things I needed to do.

Thank you for such an informative post. It is nice to see a workshop that is stocked with good old-fashioned-looking ironmongery, rather than wall-to-wall electronics.

Now the blue front door on the other side of the street, glowingly lit with such lovely colours, looks very familiar, from a time when I was Google-mapping your area - a facility I seem subsequently to have lost.

Rain, giving myself a fixed day for blogging will, I hope, provide the discipline I sorely lack and thwart the cunning of ever=ready procrastination.

Tom, the house with the blue door is almost directly opposite my door while the gorgeously pink blooming tree is my next-door neighbour. And the angular glass conservatory roof just behind that tall bare tree is part of the local pub on the corner.
Landmarks!

I remember that view, Natalie, minus the gorgeous spring blooms on the tree - and look at the golden cloud - all for such a colourful photo.

Once again, I express envy of your press and studio! I love your extra wide roller with two handles - I could have used that for some large prints I made long ago.

I would not feel too guilty about not blogging often when you are being so very productive with the book project! But I'm happy to see how it is progressing.

Marja-Leena, it's such a long time since you were here, it's time for a re-visit.
The new roller is handy but it's always a shock to be confronted by the spiralling costs of all art equipment. I used to have one of those huge leather litho rollers but unfortunately can't find it - it now costs around £300!

The music and the photo are sheer beauty. Just so lovely.
And guess what? Today a neighbor brought us several eggs from feral chickens who laid them in his house, and I bought a pineapple at the market. Coincidence? (-;
So much richness here in your work, and I love the glimpses into your studio and working methods, too.

Those neatly stowed tubes of paint; Francis Bacon could have profited from having you at his elbow. I am further impressed when I re-convert those tubes back into cash. VR has been painting for a few years and I quickly discovered that only yachting and Formula One are more expensive diversions than painting. There's a sort of formula: tube of paint: price £X, tube of "artist's" paint: price £X + £X/2.

I've daydreamed in your atelier before. Extrapolating your comparatively tranquil activities into the distantly related thunder of Hoe presses bringing out the latest edition of the Telegraph & Argus (Bradford). I wonder if your ink smells the same - an aphrodisiac to me, an overcharged adolescent, in those days.

It seemed odd that in bygone days artists like you carved their work on linoleum - a mundane domestic product for such high aspirations. No doubt lino has been replaced by some specialised product which costs three times as much. The essence of such work must depend on sharp blades (bluntness would interfere with what you envisaged) and I wonder how regularly you sharpen. Perhaps like a chef, almost without thinking, a couple of strokes on the steel between two slices of roast beef.

Did Madame Bovary really play Beethoven sonatas? Surely only the early ones. One can't imagine her sitting down to rattle off the Hammerklavier.

How long did you have to wait for those fabulous clouds?

Thanks Hattie - of course it must be telepathy...or coincidence. Either way I hope the feral eggs were tasty and the pineapple succulent. Wish I could be sharing them with you.

Roderick, you give me a lot to answer. Thanks, I like answering.

I'm quite well organised, chaos depresses me. If Bacon had allowed me into his studio I would have cleaned it up before he came back from the pub. Of course I'd never be asked back.

The tubes in the photo are not ordinary paints but oil-based relief printing inks and cost about £9 or £10 a tube, some colours much more. Indeed the practice of art is right up there with yachting in cash terms but what comes in is a lot less than what goes out...unless you're Bacon.

Linoleum is still very much in use by printmakers but my choice of vinyl floor tiles was because they're easier to cut into pieces (my blocks have odd shapes).

Those golden clouds were just there when I looked out the window - didn't have to wait at all.

Roderick, I forgot to mention the smell of printing inks. I know the smell you're remembering - it's the old-fashioned newspaper printing one - but that would have had a lot more driers in it. The inks we use are different, more viscous and slower to dry. And now with all the attention (obsession!) with health and safety in printmaking studios people are using water-based inks (I hate them) and other substitutes for the real thing. I tend to ignore those substitutes.

Hi Natalie,
Reading this post was such a treat, it sums up everything that's great about the blogosphere; I've now got a headful of thoughts and ideas whizzing round, thank you! By the way, I'm also drawing inspiration from another work of yours, the folding sketchbook you did for the Open Book exhibition a while back. I've been wanting to try something similar for some time and I found the right sketchbook (i.e. quite a small one with just a few pages so I don't get daunted by having to fill a big book with dozens of blank pages) to try it out in Berlin last week, so here goes

Hi Phil, glad my post pushed your creative buttons and I look forward to hearing about the results.
By the way, the Open Books exhibition is currently in China and will be going to Australia next.