So, for the benefit of any tech enthusiasts and at the risk of chasing away everyone else, here is what the innards of my iMac looked like when I finally succeeded in the tooth-grindingly difficult operation of opening him up. The diagrams drawn by the Genius who kindly advised me at the Apple store were more or less useless, probably applying to a different Mac model altogether, but with patience, doggedness, brute force and a look at some tech videos on the internet, I managed to work it out and only lost one of the teeny weeny screws  inside the patient. But since he's unlikely ever to recover I suppose it doesn't matter that he's got a loose screw somewhere in his electronic brain. 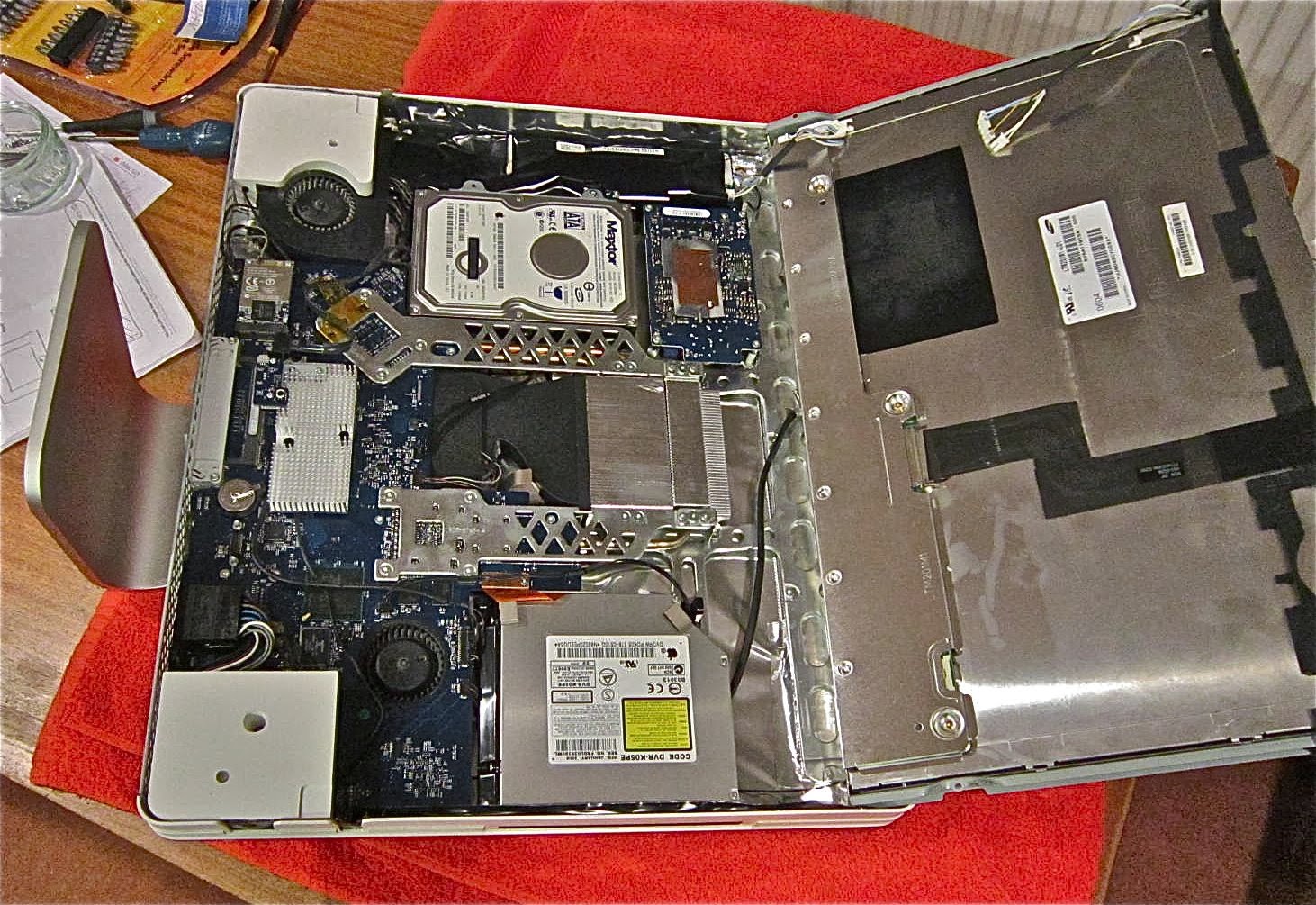 And here is my hard drive which I succeeded in removing for subsequent plugging into my laptop and copying the files therein. 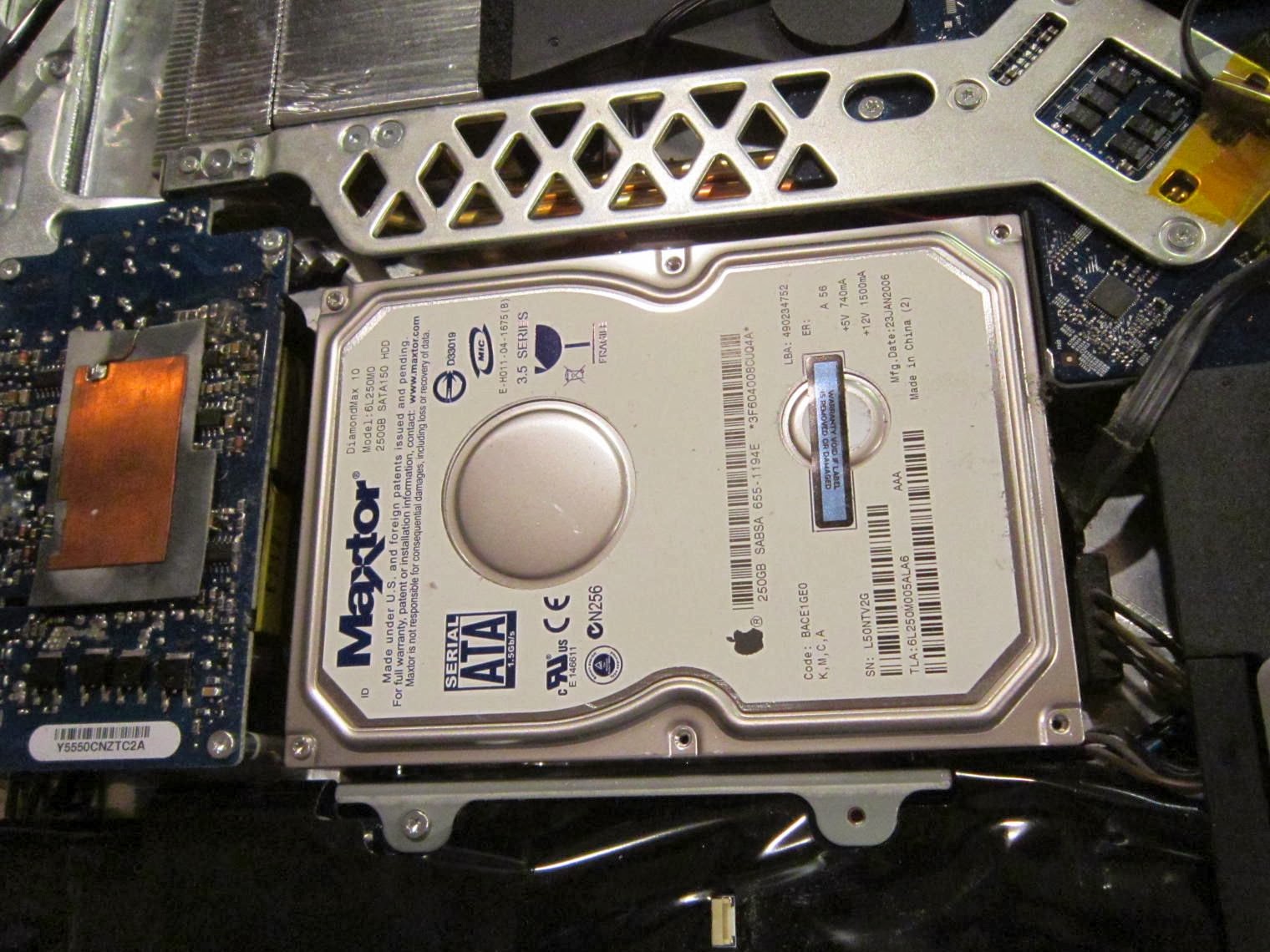 That's the end of this techy saga, although having to abandon the use of software such as Dreamweaver for uploading my website is still a problem. I'm looking into other alternatives but meanwhile, attention to computer-language has brought out my philosophical, metaphor-seeking tendencies.

For instance: take one of the options under the History menu on the top bar of your browser screen (I assume your browser has some tabs up there? Mine has, whether I use Safari or Firefox or Chrome). One of the items in that menu is:

Isn't that wonderful? With one click we can clear our entire history and start anew, unburdened of our past mistakes and the mistakes anyone else made concerning us, free of all our procrastinations, self-defeating habits and repetitious behaviour. One click and it's all gone!

So all we have to do is to figure out what that metaphorical CLICK means in ordinary, real-life language. What is the trigger in our minds which could instantly set off the CLEARING HISTORY process?

And look at those tabs at the top of your browser again: they are all wonderful advice - think about it:

What  more do you want?


Posted by Natalie d'Arbeloff at 3:21 am

The insides of things are sources of great beauty and wonder - as I rediscovered and posted in my most recent post. And a thoroughly interesting and thought provoking script you have offered for our delectation.

Tom, your observations of the Inside World are certainly thought-provoking and maybe the work you do to reach those Eureka moments is not, metaphorically, unlike the persistent,focused and precise attention required to perform a technical operation like this one.

.... arrrgghhh I am squeamish about these open-body things!

Adam, yes open body tech surgery is hair-raisingly scary but what I lack in skill I make up for in stubborness and fury at being forced to do this.

Finally, I'm up to date. Read my comments for Dec 27, Jan 6 and Jan 13 (in that order) before this one. I've sought to be ameliorative but probably failed.

I'm impressed by your gutsiness at prizing open a laptop. For me they've always been terra australis incognita. Luckily I have a local man and a recently adopted decision to spend money lavishly. In old age what else?

I'm not sure about metaphor-seeking tendencies and what follows suggests that you aren't getting out enough. Was the visit to Apple HQ enough until the Spring? Admittedly you did meet a Genius and I'm assuming you accorded him the normal Genius tribute: a willingness to act as hostess to his babies. I look forward to some quite different posts round about September.

I view your advice list and nod. But you've omitted the most important element of all. Drop down a little lower and you'll see three lines of black things carrying encouraging - nay, life-affirming - symbols. That precious sequence beginning QWERTY - with its potential to go anywhere, do anything, and in any style you choose. The wherewithal for me to comfort you in your distress (Alas, I failed) and for you to respond grumpily, pointing out I haven't done anything of the kind.

But at least I'm reconnected and I've hewn wood and drawn water on your behalf this PM. Normal service, I hope, has been resumed.

Roderick, I've read your latest comments in the proper order and, in recognition of your generosity, you are wholly and forever forgiven for any lapses of attention to Blaugustine.

I'm really glad to see you back, now you know that Blogger is where I'm currently posting, rather than on my own website, frozen since the demise of my formerly beloved iMac. And by the way my gutsiness should be doubly praised since it wasn't a humble laptop I disemboweled but a full-sized 20" iMac with all attendant complications.

Yes QWERTY is a joy and a balm for many things but not for the loss of cherished software or, ahem, formerly cherished Apple progeny.

Very glad you were able to save your hard disc, but yeah, computer obsolescence is ridiculous. Last year the old monitor for my PC failed after many years of service, and I was proud of myself for finding a new one for only $100 — until the motherboard on my PC failed a week later. So like you I switched to my laptop. It took me a while to get used to typing on the smaller keyboard. Fortunately Rachel had bought me an external hard drive some months earlier and I'd copied everything to that.

Incidentally, if it makes you feel any better, my dad had to update to the new version of Dreamweaver last year as well. His webhost upgraded to a new server and the old version of Dreamweaver would no longer interface with it. But I gather the new version works pretty much exactly like the old — they didn't needlessly change a bunch of features just to screw with people.

Hi Dave, thanks for commiserating. I'm still using the MacBook laptop and am more at ease with it now but I'll have to get a new desktop sometime. About Dreamweaver, a kind commenter (FigMince) suggested using the free software SeaMonkey which I've downloaded but not tried out yet. Apparently it more or less does what DW does but is more basic. You could suggest it to your Dad. I'd love not to be dependent on big name expensive software apps. Found a good one (so far) to replace Photoshop (for Mac only) - it's PixelMator.

I'm impressed. To me, it's as if you changed your car's starter or something. (I've never done either.)

Peter, doesn't everybody change their car's starter and open up their computers now and then? Just kidding. I'm a half-hearted nerd/geek - the urge rarely takes over.

We got an external hard-drive a bit ago (about 50 quid) with the idea of backing everything up on it all the time. Good for peace of mind - although one has to remember to back up. In theory I could just plug it into machine B and, hey presto, there's everything that had been on machine A. It also means one can wipe one's hard drive and start from scratch.

Dominic, I also have an external hard drive and backed up fairly often - just not often enough. Anyway it wasn't the hard drive that failed in the iMac but the motherboard. I managed to extract the HD, as shown above, but the whole process has still created lots of problems.