Not writing about the riots because thousands of words are being written and spoken about the situation and I don't have anything useful to add. Those who have said the most useful things are not politicians or pundits but people whose actions are better than words, people like Camila Batmanghelidh. Or like the man in the street who had served time in jail and told a reporter that instead of wasting money and time to lock young mayhem-makers in jail for a few months, they should be put to work clearing up the mess and making amends to the communities, and individuals they have damaged. And though I'm certainly not a Daily Telegraph reader, this article also hit some nails squarely on the head.

I had no intention of making a word-painting and the image below evolved like this: first I covered a large sheet of paper with splashy abstract shapes of the gestural kind. Then I decided to do a splashy self-portrait over the top. Then I painted over it with a grid of heavy white brushstrokes. Then I wanted some abstract shapes to fill each rectangle of the grid. Then I saw that letters made the best shapes. Then the words emerged.

Greenyellowbluered    Acrylic and ink on paper 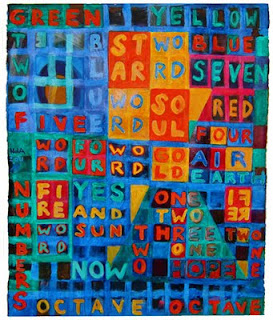 The next picture is not relevant to anything and I regret falling into the cat-blogging trap once more but Pushkine (she is female) dropped in again and is just too photogenic to resist. 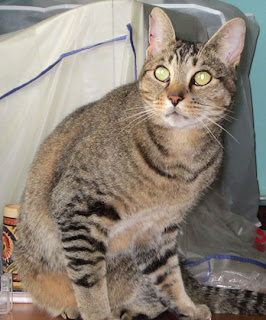 Posted by Natalie d'Arbeloff at 1:16 am

I love both pictures... cats are just like that, aren't they?

I enjoyed your telling of the evolving of the picture.

your description of how the painting wasn't and what it became is a poem in and of itself. really enjoyed this!

I liked this post. I don't know what riots are referenced, but I understand the man-on-the-street take on the situation. I agree with him. Lock 'em up at night to get them to understand this isn't a game, make them work on clean-up during the day. Makes perfect sense to me.

The artwork is different, but I understand it, too. In the overall scheme of things, everything gets blurred together so that all edges disappear. Nothing becomes discrete and individual in a landscape as seen from outside itself. You managed to capture the concept in a very concrete way and point out the culture isn't individuals, it's everyone and everything together, and the thing that holds it together is language.