Are you pursued by it? Does it wake you in the morning and stand over your bed at night, sometimes even following you into your dreams? Is it beside you as you sit at your computer screen right now, asking why you're not doing something you should be doing? Has it whined inside your head so often and for so long that you take it for granted, like the ticking of a clock or a tickle in the throat? Very like the ticking of a clock since it keeps on nagging about all the time you've wasted in the past, are wasting now and will waste in future.

Can you tell that by YOU I mean ME? Does your guilt ressemble my guilt? No? If you are one of the fortunate few who can do that living-in-the-now thing without feeling guilty, then arrivederci: go and smell the roses while I and the rest of us guilt-prisoners examine the walls of our cells and ponder our escape.

Let me make clear first of all that I don't want to get rid of guilt completely. I just want it to stay in its place and speak only when necessary. For example to indicate politely that the stone I've just tripped over is exactly the same one I tripped over last week or last year. A kind of unobtrusive, gentle Dr.Watson to my dynamic Sherlock Holmes. What I don't want is to be dominated, harassed, bullied, interrupted and nagged by a mere concept, a chimera, a mirage.

What does it look like anyway? Has anyone ever seen a Guilt? I don't mean the kind that could be and should be haunting you if you've done something really really bad, but just the average, non-descript, irritating voice-over which never stops droning that....uh....what exactly is it droning? 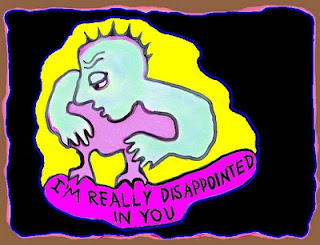 MORE
Posted by Natalie d'Arbeloff at 2:44 am

Yup. I know it well!

Dave, maybe you could write a response to this post in Via Negativa? Then I'll reply to it and so on. That is, if The Guilt allows us! :)

I try to avoid guilt but then I wonder if I am not living fully. So often guilt is the result of choosing what we think is best for us when others want us doing something else. If we go along with their needs, we may avoid the guilt but what else do we miss.

Rain, oddly enough I haven't really felt guilty about the times I've chosen to go my own way rather than what others wanted. My guilt-battle is more an internal dilemma. I've just tried to reply to other comments on my main Blaugustine blog. The problem is to know why I am 'disappointed with myself'.

Rachel,you're right. Maybe we should invent another word for this? Guilt,or anxiety, don't really describe it.Disappointment with self is closer but somehow need more precision. I think I'm going to write another post.