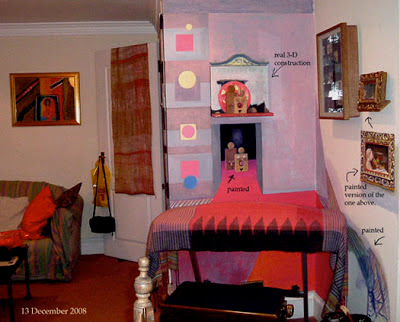 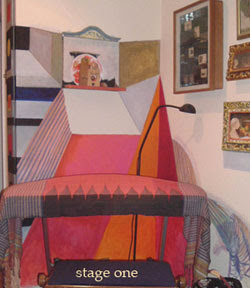 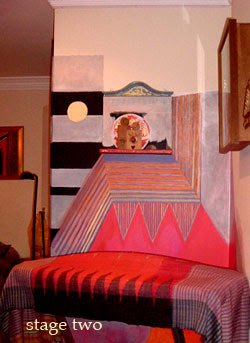 All of a sudden I got the urge to paint the wall behind my shawl-covered keyboard to look like it was a space extending beyond the room. So I got out the acrylics and the brushes and started following the lines and colours of the beautiful ethnic shawl as if they were penetrating the wall. I love the feeling of painting on the large solid surface of a wall, so much more satisfying than canvas or paper. That's what drew me to study mural painting in Mexico and later I actually was a mural painter for a while - I'm gathering some photos which I'll post on another page shortly.

Anyway the current project is under way and has gone through various changes, some of which I photographed. I'll post the final result when ready. Following a creative impulse without making a plan as to where it's going has unexpected results and so now there's also a trompe l'oeil version of a small painting/construction on the adjoining wall.
Maybe I'll be inspired to start learning the keyboard again.

Posted by Natalie d'Arbeloff at 8:26 pm

I take it the bags hung from the door handle are real :)

Yes, the bags are real. I always hang my shoulder bag, and any purchases that I'm going to return, on that door handle. Habit!

Thanks Pica, don't know how it'll end up but at least I've got the photos!