A naked woman jiggling to the beat of insistent drums is not something you usually see if you happen to be emerging from John Lewis on a Wednesday afternoon. But there she was in all her blonde glory because, obviously, she was part of the Extinction Rebellion demonstration in central London and I happened to be there because I didn't know it was going to be on Oxford Street. Apart from members of the police standing around looking disgruntled it was laid back and seriously jolly. Voices here and there raised in songs of protest or support and if there was disapproval amidst the bystanders milling about I didn't see any.

I agree with Extinction Rebellion's basic demands and premises (look them up) but I think their methods of drawing attention lack focus and concentration. If you lump together all the issues that need fixing into one big stew, the odds are that none of them will be resolved or that it will take far too much time. What's needed is clear information and single-issue campaigns which the general public can easily participate in.

For example: give us a list of EXACTLY what products we could and should stop buying right now? Industries and governments refuse to change their planet-and-human-harming ways because they make so much money doing it. If their worldwide sales were suddenly to drop dramatically they would be forced to try alternatives.

Of course transport was held up and it took me three hours to get home from Oxford Street on Wednesday. 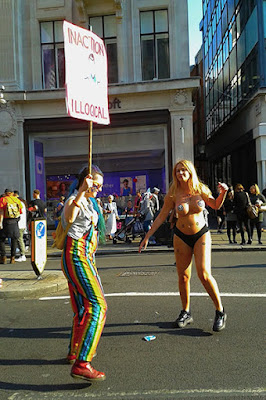 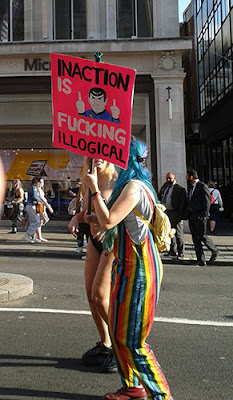 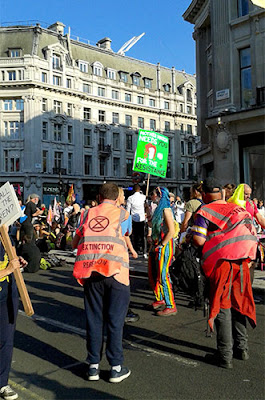 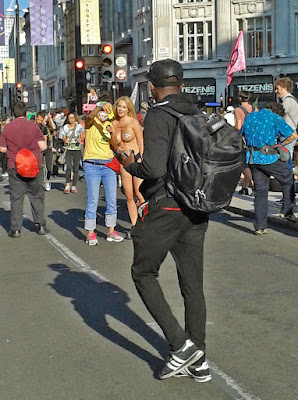 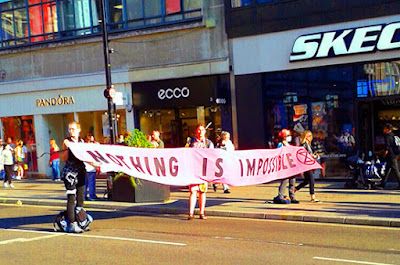 Posted by Natalie d'Arbeloff at 6:05 pm