Sometimes I impress myself. It's okay to impress yourself as long as you stay in reality and don't get into Trumpish-type insanity which totally denies the existence of reality. My latest bout of self-impression was for a challenging bit of DIY which you wouldn't expect from a so-called Little Old Lady (LOL) if you believe those clichés about LOLs and LOMs (Little Old Men).

I was expecting delivery of a new sofa to replace the exceedingly uncomfortable, decrepit one I boastfully re-upholstered in another bout of DIY a while ago. I realised that the new sofa wouldn't get through the door of the living room and the only solution was to remove the door. This is what I proceeded to do. Unscrewing the rusty screws from the hinges was slow but not impossible (I stood on a box) but the middle bit, a long rubbery thing fitted into a hole, took a lot of tugging and wrenching. It eventually gave in to my efforts and the heavy door was released. Impressive, eh?

Well, yes, but the door being heavy I only managed to lean it against the wall. The delivery men brought the new sofa and, hurrah, it fitted through the door-less doorway. Now I have to ask a neighbour to help me put the door back on its hinges. 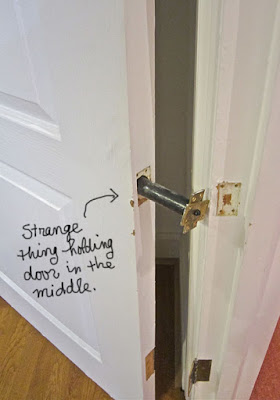 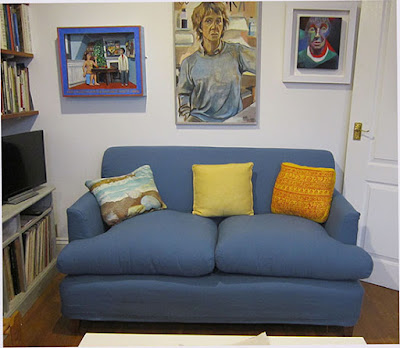 Posted by Natalie d'Arbeloff at 1:44 am

The technical name is "hanging" a door. OK if you're able to use the original screw-holes, more of a nightmare if you're starting from scratch. Maths tells you where the problem lies. The hinges must be attached in a way that ensures the door is vertical, absolutely so. But a door is usually well over 6 ft tall. A few moments reflection on all that stuff about right-angle triangles and hypotenuses will suggest that the tiniest misalignment of the hinges is multiplied disastrously when the door is attached. In fact, if one hinge is out of alignment with another you may end up with a truly paradoxical situation - a door that will not open or close.

It sounds as if you'll be able to re-hang the door but even this is simpler if two people are involved; the difficulty lies in ensuring the door is more or less vertical during the early stages and that it clears the floor. If the old screws are rusty it may be a good idea to replace them. New screws may provide more "bite" but they may be harder to screw in. I hope for your sake the wood constituting the door jamb is in good condition (this is more a problem with outside doors); if not the carpentry is only just beginning

Old doors made of solid wood will be more in keeping with your aesthetic tastes, but they are heavier. Moulded plastic doors are hollow and lighter even though they may be anathema to you. Also they do not rot (provided the jambs are also plastic).

All this may sound smug, unnecessarily pedagogic and somewhat Olympian. I was always been an also-ran in domestic DIY although I have in my time - for reasons of poverty - embarked on major projects. Now I pay others. Which condemns me to another misery which nevertheless generates useful bloggable experience: "waiting in" for the artisan.

Robbie, thanks but I wasn't hanging a door, just un-hinging an existing door, all by myself, because a new sofa was going to be delivered which would not have made it into the room if the door was left in place. I am repeating myself! A neighbour came to help me yesterday to re-hang the door - ie to hold it in place while I screwed the hinges back where they were before. The process would have been simple were it not for that damned black rubber tubular thing: I've learned it's called a Perco and is an automatic door-closer. Too boring to go into more detail but I solved the problem by doing away with Perco.There was no quesrion of changing the door. The same one that's in the photo remains where it's been for the past 20 years or so.