MOVING ON: PARIS AND LONDON

The time lapse between illusion and disillusion was never very long in my life. Maybe that's because reality and stability didn't figure prominently in my upbringing. Or maybe it's because emotional entanglement pushed me down from the high spot on the seesaw and, in the low spot, I didn't have the patience to wait for balance. Anyway there's a lot more to say about the Art Students League period but one day, sitting with my mates in Carneys Bar down the street from school, I felt an ending coming on. I seemed to be stuck in an artificial world which no longer rang true to me and my work felt stale.

My father was about to leave on another trip to Brazil, stopping in London and Paris, so I decided to go with him. Some of the gang I hung out with at the League came to see me off and waved goodbye as the ship sailed away.

In Paris I stayed at my aunt Alice's small flat on Rue de l'Université off the Boulevard Saint Germain. She was out at work all day and I had the place to myself so I set up an easel. Then began the strangest time, involving automatic'writing and painting and other 'alternative' experiences (without drugs) but I won't elaborate on ithis now.

Later on my sister arrived and we went to live in London for a while. I had my first exhibition at the small AIA (Artists International Gallery) on Lisle Street in Soho. I just walked in and showed them some work and they said yes, I could have a show. It was a very easy-going place. There were some good press mentions, even from Patrick Heron and Lawrence Alloway! And the Evening Standard snapped a photo (can't find it) of me walking down the street. 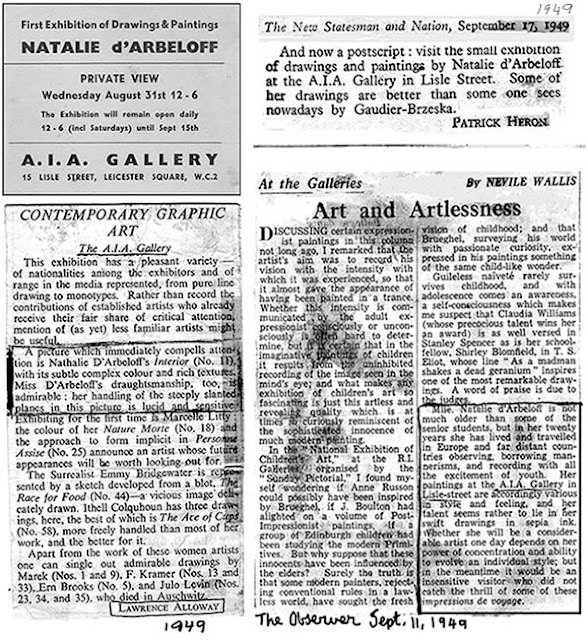 Posted by Natalie d'Arbeloff at 1:40 am

My father, several years divorced from my mother, made an uncharacteristic decision in the mid-fifties. Rather late in the day he concluded that the family (actually myself and my two brothers) would shortly cease to function as a unit (when had it ever?) and he would make a last gesture which would represent the final stage of our education. We would go to Paris as a foursome for a week.

To some extent the only tangible outcome was proof that the break-up had already started. During the daytime the atmosphere was moderately toxic, only in the evening - under the influence of fabulous wines from the Bordeaux Big Five - did the tensions slacken. But there was one personal benefit for me and the memories are still as sharp as the actual experience, nearly seventy years ago. For you, I suspect, I need only list the names. Our hotel was in the the Rue des Beaux Arts, we drank (breaking the law relative to the age of my two brothers) out of doors at the Aux Deux Magots and the Cafe de Flore and we ate at the Brasserie Lipp. No need to tell you which Parisian quartier was our home base.

Thanks for this memory Robbie. Of course I know the quartier latin et la Rive Gauche very well. What year would this have been? Did you ever go back there on your own later on?