The Laydeez Do Comics weekend festival was terrific. The main prize was quite rightly won by Niki Banados for her graphic novel in progress Shivers in London.

My own GNIP Double Entendre won the Rosalind Penfold Award, selected as best from entries by a comic artist over 50. A boldie oldie!

People were filming the awards event so no doubt this will turn up somewheret. Now I'm going to have breakfast. 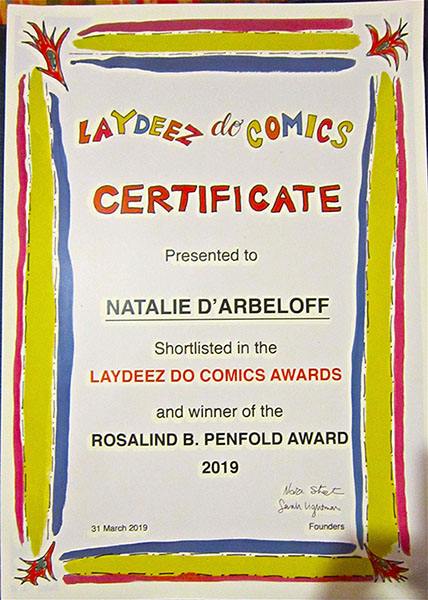 Posted by Natalie d'Arbeloff at 1:11 am

Thank you very much young Tom! All the best to you.

Dear Nathalie
I hope you don't mind my contacting you. I am a curator in London researching a former pupil of yours at the City Lit - Helga Michie - and wonder if you have any recollections of her. I would be so pleased to hear from you if you have a moment.
Rachel Dickson
Ben Uri Gallery and Museum, London NW8

See, everything is a winner.

Hello Rachel Dickson, many thanks for contacting me. I do indeed remember Helga with affection and will email you tomorrow. I'd be glad to share my memories of her and a photo of her in my class.