http://www.oldstilepress.com/…/trans-siberian-prosody-and-l…
Click on the above link to see details and images from this book.

The most recent collaboration with the Old Stile Press happened like this: on my friend poet Dick Jones’ blog, I read his translation of Blaise Cendrars’ famous 1913 poem Trans-Siberian Prosody and Little Jeanne from France. I knew and loved the poem in French and had read a few of the other translations but I thought Dick’s version was exceptional, really capturing the meandering maverick’s style and energy.


I immediately wanted to illustrate it and felt that it would be a project that Nicolas and Frances would be interested in. Indeed they were, and over the course of nearly two years, Blaise Cendrars’ words translated by Dick Jones, interpreted by me in 43 relief blocks, became an Old Stile Press book, designed, set and hand-printed by Nicolas, publicised and distributed by Frances, approved and prefaced by Miriam Cendrars, Blaise’s daughter and a formidable talent in her own right.

To launch this publication in 2015 Dick and I prepared an audio-visual presentation which was held at the London Review Bookshop. I made a video with the illustrations, timed to fit with a live reading of the poem by Dick, accompanied on the guitar by Doug McGowan. There was an enthusiastic response to this ‘performance’ and we’re hoping to do it again somewhere - all invitations considered! 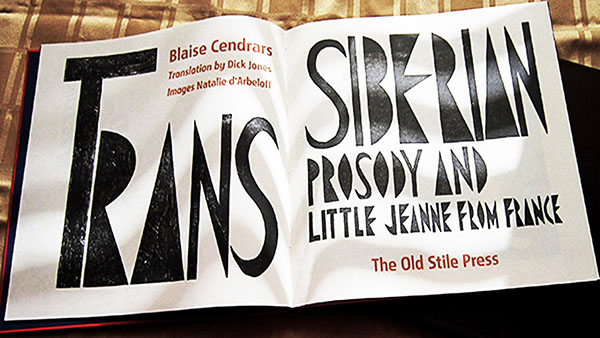 Posted by Natalie d'Arbeloff at 1:24 pm

2015? I enjoyed following all that online. I thought it was longer ago than that. It's always good to realize that things that happened in the past happened more recently than I thought!

Dom, yes I too am constantly surprised by the unreliable faces of time. Like an actor wearing different masks so you're never sure who (or when) it is.