At the end of 2007 I was joint winner of the Mary Stott competition held by the Guardian. On my main blog Blaugustine I wrote on the 8th November 2007 (see blog archive November 2007).
about the Guardian party where I found out I'd won. (The cartoon below was about the painful boots I wore for the occasion.) The prize was to spend a week at the Guardian as guest editor of the section then called Guardian Women.

That week was fun and focused. I wrote Where are all the older female geeks? (Guardian 13 June 2008), comissioned an interview of Paula Rego by Emine Saner Age shall not wither her (Guardian 18 June 2008) and in that same issue wrote a piece Choosing art means you have permission to be a child forever.The geeks article was reprinted in another publication and quoted on line, an organisation asked me to speak and I was invited to be one of the guest speakers (all expenses paid!) at the Women’s Global Forum held in Deauville in 2013.


A few weeks ago, in the small hours of the night, I had a sudden urge to write about why I fear admitting my age. Scribbled a few lines then thought: why not ask the Guardian if they’ll commision an article? I contacted the features editor I met in 2008, sent her a brief outline and reminded her of my stint in her office 11 years ago. Didn’t mind whether I’d get a Yes or a No - I wasn’t even sure I really wanted to make a public confession. It was just one of those late night things.

So when I got a positive response I was chuffed and, as chance would have it, the Guardian was planning a feature on ageing in the first week of January. So my idea arrived exactly at the right moment. The article was commissioned, I wrote it fast, met the 30th December deadline. Et voilà! 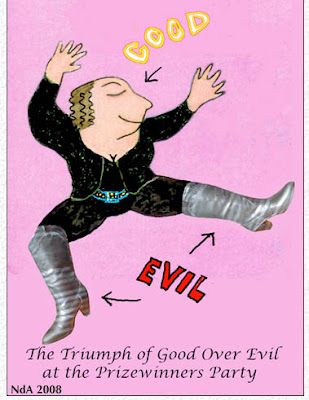 Posted by Natalie d'Arbeloff at 3:31 pm

Your life just keeps on amazing me.

My motto is, as you know: "You Are Forgetting to be amazed".

Nothing ventured,.nothing gained, as they say!

Solitary cyclist, hello. I have ventured a lot, hither and tither. Venture is my middle name! Wonderin what the next venture might be.