If you're in London, it's definitely worth going to the National Portrait Gallery for the Howard Hodgkin show Absent Friends.

Absence certainly takes centre stage because those people whose portraits Hodgkin painted at various stages in his long career are not actually depicted. What he did was to invent a carefully constructed visual language to translate his memories and feelings about certain individuals or situations into pigment, colour and form. They're not abstractions, not abstract expressionism, and not merely "mark making" (irritating art-speak!) The subject matter is always essential and Hodgkin is a narrator, telling stories which remain alive in his memory. The exquisite Indian miniatures which Hodgkin loved and collected also tell stories - he borrowed from their intense colours and precise construction  but deftly removed all illustration from his own tales. An acrobatic tour de force.

Unfortunately that vigor and inventiveness didn't persist into his late years and the final paintings in this and other recent exhibitions have an unconvincing, floppy bravado. You could say, well, that's what old age does. I'd vehemently disagree (I would wouldn't I?) and I don't know what took the vim out of Howard Hodgkin but it surely wasn't old age, even if he was 84 when he died in March this year.  Anyway, see the show if you can or if not, look up his work. 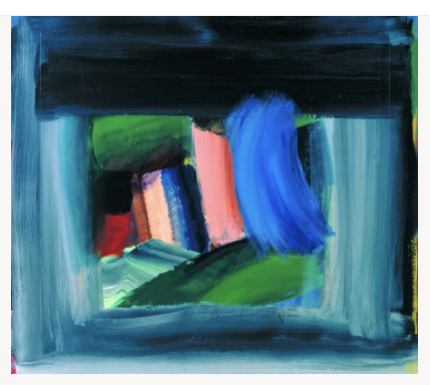 Oooer, I have some 'primary' colour paints ... could i become famous with something like this?

looking at this pic. 'descent'?

'from colour into darkness' ??
(Am of course, using the 'English' spelling ... and methinks a great deal of intricate, and subtle philosophy is lost; by the American removal of the "you" from 'colour', 'honour' - and 'humour'.

.. but with steps leading UP to the left? Far be it from me to create images that darkness leads left (politically, so to speak) ... meh.

Davoh, if you feel the urge, why not go ahead and paint however you wish? No need to imitate or compete with Hodgkin. But if you're interested, there are loads of images of his work on the internet.