UPDATE ON THE UKULELE STORY

The classes in the pub were fun and instructive. I learned that pressing down firmly on the strings, fingers and wrist of left hand bent into required positions, then moving to different positions with new bends and stretches of every hand bone whilst simultaneously strumming down/down or up/down/up/ down in a carefree, rhythmical manner with the right hand, all the while hugging the uke flat against the body yet also managing to bend my neck forward to see where my fingers are on the instrument's neck... .

Well. I learned that it is not a walk in the park for a short-necked, short-arsed, short-fingered person with rather stiff hands. The teacher was good-humoured, patient, competent and, seeing my struggles, he kindly gave me the last lesson one-to-one. I now know what to do. It's only a matter of training my bones to obey my brain.

I decided that some improvements to the instrument itself were needed if I was to make any progress. A shoulder strap, so that I could forget about holding the uke, would also allow me to tilt it so that I might see where to place my fingers. To remember basic chord shapes I stuck coloured dots on the uke's neck and diagrams on its body. I bought a strap but, as my uke didn't have the posts to attach it, I cut and glued bits of wood for the screws to fit into. Then I got a set of good Aquila nylgut strings to replace the cheap nylon ones on my cheap little soprano uke, googled instruction videos on how to re-string the thing and proceeded to undertake this apparently simple task.

Not simple. More like fiendishly heart-stoppingly difficult. It's a long story but to summarise: the bridge broke when I was tightening a string. I thought I could save it it by gluing a new piece of wood over the broken section. I used Araldite, the strongest glue in the universe, everything looked perfect, I managed to restring the uke. I practiced. I was getting a tiny bit better at moving from one chord to another.

Then yesterday, without warning, suddenly, there was a loud bang or snap or bing or whatever sound four strings make when they've had enough and the entire bridge broke away, strings attached, from the ukulele's body. You can see the miserable wrecked little Aradilted bugger in the photos below as well as my now stringless and bridgeless ukulele. The strings are saved. I'm not giving up. I will buy another, slightly better uke and I will master a few chords, just enough to sing a few songs. I will. 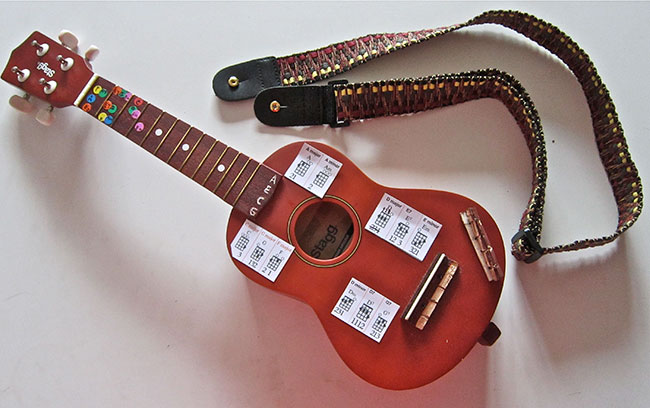 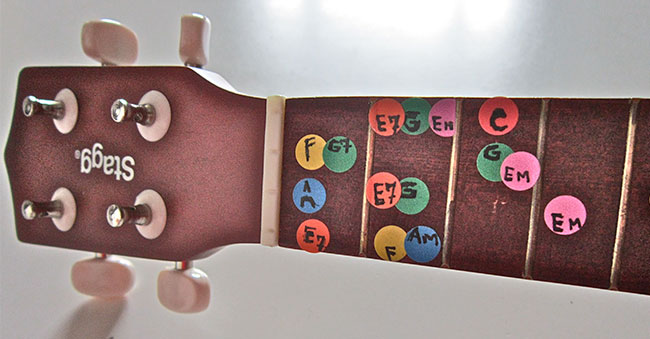 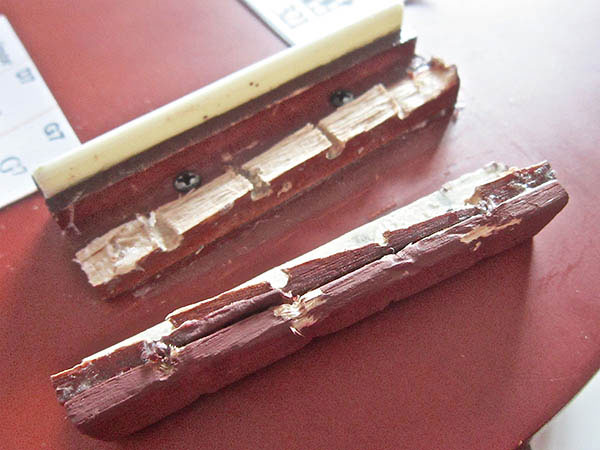 Posted by Natalie d'Arbeloff at 5:42 am

I'm sorry that you're having such difficulties with the dreaded 'uke'. On the other hand, I couldn't help smiling at your DIY attempts to keep said uke functioning. As a one-time player of the violin [my son does the same professionally] I was filled with a sense of amused horror at your bridge repairs! I did, however, find it of interest that the uke bridge appears to be fixed to the sound-box/body. On orchestral stringed instruments this is not the case, the bridges [far more fragile] are movable. It all sounds quite a fun exercise; hope you continue to enjoy it. You ARE enjoying it, are you not?

Tom, I'm taking this whole ukulele enterprise with much more than one grain of salt. As I've mentioned before, all I want to do is to strum the most basic chords to go with singing (for my own pleasure) some of my French, Spanish, English chansons.

I will enjoy it indeed when I overcome the difficulties of reaching this very humble aim. I didn't hesitate to perform DIY operations on the body of this uke since it's one of the lowest priced (around £20). The next one will be somewhat better quality but nowhere near a 'proper'instrument costing hundreds. I well understand your horror at my bridge repairs if I had acquired one of the top quality ones - lovely, but completely wasted on me.

There's a lovely ukelele man, Ken Middleton, on YouTube, Nathalie, who won't solve any of your problems, but may inspire/amuse you. He's just an average singer, but he enjoys himself. His smile at the end of his version of the Beach Boys' 'A Day In The LIfe Of A Tree' is especially good.

'A Day In The…' is at https://www.youtube.com/watch?v=nTMouQA9nwU

FM, I've just followed those links and heard Ken - wonderful! I love his unpretentious style and obvious enjoyment.He's playing a top quality tenor-size uke, not a tiny soprano one. It would take me many years to do even a quarter as well but am certainly glad to see and hear him, thank you.

I took piano lessons for 7 years as a youngster but hadn't touched a piano in scores of years. The BRD gave me her old electronic keyboard a few years ago to mess with and I found that I had forgotten everything I ever learned. She got it back.

Bruce, same story with me. Had piano lessons as a child, didn't do badly. Forgot it all as years went by. Took it up again at beginner keyboard classes about 10 years ago, started reading music again but had no time to practice and forgot it all. Now that I really truly don't care about being good at it (by the way, this doesn't apply to my artwork) I might actually keep on with the uke.

Get another keyboard - or a ukulele?

Leah, Arthur Godfrey? That goes way way back to prehistoric times! Unfortunately,I remember those times. Did he have freckles? Can't remember that.

Just being silly again. :) I will leave you be. I only had a cell phone and it doesn't show your entire page,so I missed the link to memoir but now have a lap top to connect to phone. So, I will check back from time to time to see
your memoir edits and additions. :)))
prehistoric note...yes, she and howdy duty/doody both had freckles.

Leah, glad you have a laptop screen now. I always forget that a lot of people only look at stuff on the internet on the tiny screens of their phones. This really renders obsolete all my efforts to design my website and blog pages for full-screen viewing.

I'll definitely mention over here whenever I do any updating on my autobio. Thanks for reminding me to get on with it!

Howdydoody!! Wow, that really goes way back into pre-prehistory...when I was in kid-school in New York. I guess you're in the USA...where?