I want to say thank you and bravo to Gina Miller and colleagues for the courage, enterprise and informed committment, as ordinary (extraordinary) members of the public, concerned enough about upholding the rule of law to challenge the government itself.

Because of their action, what should/could have been obvious to everybody if they'd paid attention is now officially confirmed: Prime Minister Theresa May cannot trigger Article 50 without a Parliamentary vote - she wanted to zoom ahead, ignoring Parliament, and now she can't because the Supreme Court has declared it's against the law.

Brexit will still go ahead but this case is a historical victory, proof of what individuals can achieve without necessarily being politicians, pundits, prime ministers, presidents or any other Persons of Influence. 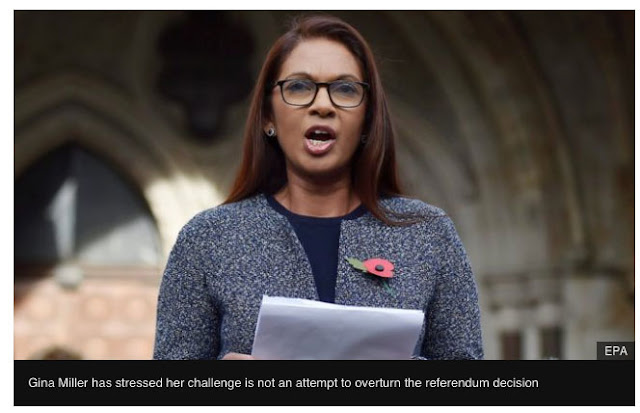 Posted by Natalie d'Arbeloff at 12:20 am

Yes, and she was impressive wasn't she. From a personal point of view I enjoyed hearing the lawyer from 'Fair Deal for Expats' too. And the irony that if the government had just accepted the first ruling and not appealed they could have been where they are now much sooner, so grumbling about delaying etc rang rather hollow.

What I have found to be particularly sickening about the whole affair has been the toxic attacks on both Gina Miller and the so-called "enemies of the people" judges. Yes, Gina Miller did well, and it had nothing to do with elitism, but with fighting for a principle.

Lucy, yes indeed, just as you say. And Gina Miller is what I think of as a true hero, someone who sets a positive example, one that is feasible and can actually succeed.

Tom, I too was appalled by the horrible abuse and threats she received and by the sheer stupidity of those particular media taunts. They were the same Brexiteers who shouted about "Getting our sovereignty back!...Make Great Britain great again! etc." and waving the flag, while not bothering to understand that Gina Miller was doing more for this country's credibility and sovereignty by upholding its laws than any of their so-called 'patriotic' rants.

Regrettably the same bad behavior toward opponents of Mr. Trump is going on in our country.

Bruce, yes the creepy crawlies come creeping out of the woodwork as soon as they get a signal that the coast is clear. It looks like that signal is being Trumpeted out loud and clear and echoing in many places around the world. But there are also many more groups and individuals speaking out against such nastiness, ignorance and stupidity so there is something to feel positive about.

A remarkable, articulate, and determined woman; balanced too in her utterances. Also, thank God, a wealthy one. Can you imagine how much it cost to enlist the services of all those leading counsels and juniors on £250 or more an hour? I mean - Mishcon de Reya (one of three London law firms who took on the case) didn't come cheap, although I understand crowd-funding played a part, as well as the seemingly inexplicable "Spanish hairdresser". In fact for someone who was educated at Roedean Gina Miller's led a fascinatingly adventurous life (see the BBC's detailed biog) and good luck to her. I noted somewhere, no doubt in The Guardian, she deserves a damehood but that's a mere token. Slip back a few centuries when half of Buckinghamshire was handed out for political services, that's more the mark.

Note too that she thanked the police for their persistence in tracking down eight of the trolls who thought they could hide on the Internet. It's not often these days we hear good news from that quarter. I'm not exactly a fan of the Met but is it too fanciful to imagine that she inspired them to do the right thing for once? That good can generate good?

Amen to all of your comment, Robbie. Apparently some are upset that the spotlight has focused on her when there were more people involved with initiating this action. Well, of course all concerned deserve credit but there will always be some who rankle if one stands out more than the rest. C'est la vie and I think it's no bad thing to have a 'poster-person' for a good cause - may she inspire many more!